I watched the entire first season of the Doctor Who spinoff Class, all eight episodes. If the show returns, I probably won’t watch it. There was plenty of material of value to start with, but the story squandered most of it and my emotional state, at the end of the finale, was one of boredom rather than excitement or intrigue.

Class is set at Coal Hill School, a recurring location for the Doctor Who series. Fifty-two years ago when Doctor Who premiered, the Doctor’s first two human assistants were teachers at Coal Hill.  Most recently, Clara Oswald and Danny Pink taught there. In Class, a rift in the time-space continuum puts the school at risk and a quintet of students, along with one grouchy alien protector called Miss Quill, must protect the school and students from various incursions.

Here’s what they had going for them at the start: 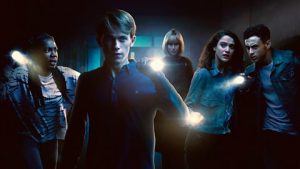 “Where’s Mattheusz? And why was he wearing that red shirt?”

Doctor Who
They are a spinoff. They had the Doctor Who lead-in. The audience got a warm handoff in the first episode. (The Doctor, metaphorically speaking, turns to audience and says, “Audience? Meet Class. Class, meet your audience.”) Sadly, the Doctor didn’t make any return visits. That’s a shame because it might have helped the first season, although it’s doubtful it could have saved it.

Quill
Quill was a flat-out brilliant character played to over-the-top perfection by Katherine Kelly. Quill and Charlie, who is a prince, are in hiding on earth after the Shadow Kin exterminated both their races. Quill was a revolutionary, fighting to gain parity and respect for her people from Charlie’s people, the Rhodians, a society of entitled oppressors. The Rhodians won the war, and punished Quill by binding her to their crown prince as an enslaved “guardian.” Nothing could have been much crueler, and Quill knows it. Quill is Caliban if Caliban worked out, did martial arts and went to the firing range three times a week. The twisted logic of the oppressors trapped Quill, via an implant in her brain, in a vicious Catch-22; she cannot wield a weapon, but she must protect the prince. Thus, in some cases, she can wield a weapon only as long as it takes to protect him. It would be easier to feel sympathy for Quill if she had not manipulated a human student into fighting an alien, which led to his death. It is this discomfort, the ethical uncertainty of Quill, that made her so compelling. That, and Kelly’s performance.

Mattheusz
In the first episode, the student Mattheusz seemed like a minor character. Crown Prince Charlie has a crush on him and invites him to Prom. Mattheusz comes out to his family, with predictably unpleasant results. I was biting my nails as Mattheusz looked more and more like a redshirt in Ep 1 (the way another character’s date was.) M lived, and went on to smolder sexily at Charlie’s side all the way through season one. Not only do Charlies and Matthuesz get some of the most romantic early-stages-of-love dialogue I’ve heard anywhere (ever), M has an ethical center and a gift for cutting through the nonsense and getting to what’s right. Once again this character was in the hands of an actor, Jordan Renzo, who made a complete commitment to the role.

Good actual parents
Tanya is a prodigy who has skipped several grades. Although she is fourteen, she is in class with sixteen and seventeen-year-olds. Her Nigerian immigrant mother wants her to excel, and wants to protect her baby, and only daughter, from the physical and social dangers of British high school. Mom is overprotective in a laughably inept fashion (since this is a show about space monsters attacking the school on a regular basis); but she tries. She is a loving mom who may be clueless about the real goings-on at Coal Hill School but loves her daughter and knows to say, “Take a break and have some fun,” as well as, “Are you talking to a boy?”

Ram is the jock of the group, a footballer with a brilliant future until, in Episode One, his girlfriend is turned into cinder by the bad guys, and his legs are cut off. The Doctor attaches some spare legs, but they aren’t exactly human legs. It is safe to say Ram doesn’t bounce back quickly from his setbacks. His parents are separated and his father is his unreserved champion. When Ram finally shares the truth and shows dad his new legs, his father accepts it and refocuses Ram on his soccer kicks, and it is his Dad’s faith in him that helps Ram relearn the skills of the game.

A rift in the time-space continuum
Because, you know, its sci-fi horror and it’s a DW spinoff, so they had to.

Now, with Season One complete, let’s look at what’s left:

Quill.  Matthuesz. Multiple tiny little rifts in the time-space continuum. (Plus the existing one? I’m not sure.)

What went wrong? Let me make a brief list. 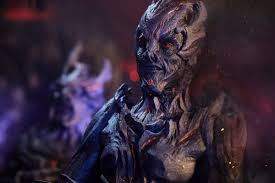 We’re dark. We’re boring. We don’t care who knows it.

The Shadow Kin
There were a couple of walk-on villains this episode when the show still had the potential to be good, but we could not get away from the evil Shadow Kin. They leaped through the time space rift to mess with Coal Hill School –and ruined Prom! In Ep One the Shadow King and nice girl April ended up sharing a heart. The Doctor sent the Shadow Kin away, but they came back. April went to their planet and fought their king, won the fight and sent the Shadow Kin away, but they came back. The Shadow Kin are like ants in your kitchen. They are boring villains who use too much CGI. They are also too closely tied to the really annoying secondary storyline about the Ikea entertainment center that Charlie has in his room. It’s (dun-dun duunnnn…)

The Cabinet of Souls
Yes, they called it that. The Ikea entertainment center holds all the souls of Charlie’s people, the Rhodians, whose souls, in their pure form, can be like a super weapon that could kill all the Shadow Kin, only that would be wrong. Or, if Charlie did that, he really would be the last of his kind instead of just pretending to be. And [YAWN]. This was just awful; Quill hissing “Use it, uuuuse it!” like a frat boy chanting “Chug, chug, chug!” at a party, while Charlie dithers over whether to use it. Charlie thought about the cabinet every time the Shadow Kin showed up, which was every other minute. It’s bad to commit genocide. This should, somehow, be a serious moral question that plays throughout the season. Instead it managed to be… boring.

(Spoiler Alert) The Weeping Angels
From the solitude of my family room (Spouse was in the shower) I actually said out loud, “You have got be kidding me!” They were not kidding me. The shadowy human villains in the piece – because of course there had to be some – are actively working to bring about The Arrival (not to be confused with the excellent SF movie of a similar name), and are in league with the Weeping Angels. I can only guess that the Doctor Who prop room had a bunch of polystyrene angels left over and someone thought, “What the hell, why not?” I didn’t think anything could be worse than the Shadow Kin, but this… this could be.

As a surplus of “bad,” the weeping angels now kill humans in a different way than they did in every Doctor Who episode in which they appeared. Their new technique, whatever it is, leaves behind corpses. Isn’t that odd?

You’ll notice that on the list of things they still have going for them, “parents” has disappeared. Yes, no surprise to anyone, the two supportive, practical and loving parents were killed by the Shadow Kin in the finale. Because of course they were.

Could anything save this show? I think one thing could. Here’s the Season Two I’d like to see: Quill, who was pregnant –it’s a long story—at the end of the finale, is now a single mom with a shape-shifting baby; and has been inexplicably promoted to headmistress of Coal Hill School. With the implant removed, she can kill whenever she wants, and she doesn’t like human children, but she swore to the Doctor that she would protect the school, so she’s stuck; stalking around the school in her perilous high-heels, delivering edicts about the snowflakeness of human young, and in general being Quill. There’s a show I’d watch.

This entry was posted in Movies and tagged BBC America, Cancellation, Class, Doctor Who, Spinoff. Bookmark the permalink.