Saturday started at 5AM for me. Shower, coffee, half a bagel, tote bag, purse, lock the door and out. I met Barbara G at her house around 6:10 and we drove to another house in Santa Rosa, where we carpooled to the meeting point in Napa, where a Wine Tour bus waited for us. 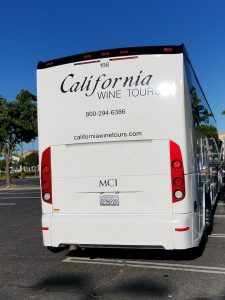 We weren’t going wine-tasting. It just looked like we were; a bunch of graying mostly-women from Napa and Sonoma County piling into a wine tour bus. Instead, we were driving down to Manteca to canvass and do voter registration. It’s a clever way to fake out the opposition.

Barbara G, a retired executive staffer from Health Services, ran into me downtown one morning when she was walking her dog, and invited me along. Originally, we were going to Tracy, to canvass and be at “sites” to offer voter registration. I pictured myself sitting outside a WalMart at a table. I said “yes” anyway because I do need to do something more than send money and whine on Twitter.

As the next couple of weeks went by, the outreach started to shift, or maybe evolve. We weren’t going to Tracy, we were going to Manteca. And we’d be knocking on doors. I was still in.

There were 33 people on the bus. Many/most were from the Napa area, several group like RESIST and Rise Up Napa; some staffers from Representative Mike Thompson’s office. Representative Thompson was there when we got on the bus, and he gave us a pep talk. Then we were off for a brief stop in Concord where we would pick up more volunteers. 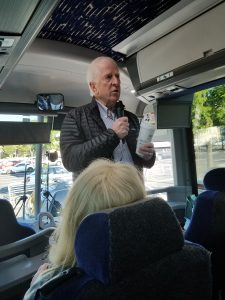 Representative Thompson said that going out into neighborhoods was something he liked the most.

They had coffee and pastries on the bus. I caught up with old friends and bosses; Jo Weber, Tara Smith, Linda Deis, Jenny Tashieff and of course Barbara. The Sonoma County group also calls itself Rise Up. It’s the Rise Up Network. The name has nothing to do with Hamilton, that’s just a coincidence. Okay. If you say so.

Once we were on the road, a woman named Mary Jane made us all introduce ourselves via microphone and say a few things; I said, “I’m a newbie.” Others talked about their history with the Democratic party and grassroots organizing. It got a little bit competitive. People mentioned their mock-campaigns in the fifth grade, when they championed the Democratic candidate.

My favorite on-the-bus story on the way down to Manteca came from one of the younger women, who said her proudest moment was when she persuaded her conservative, third-generation Dad to vote against California’s gay-discrimination bill, Prop 8. The riders all applauded when she said this. “It was an event years in the making,” she said.

After a brief stop to pick up four volunteers in Concord, we were on our way. 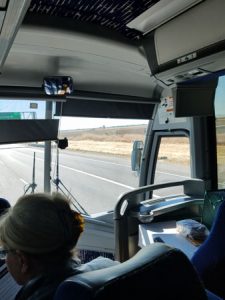 The view out the front of the bus.

The California Central Valley in June, even in a year with above average rainfall, has long flat stretches and low rounded hills the color of butterscotch. Blue skies with a few fluffy clouds rose above the golden stretches. Wind turbines rotated in a stately manner as we rolled past. 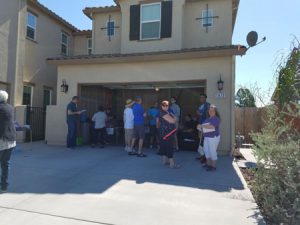 The staging area, generously lent by the owner.

We met up in a newish house in a newish tract on the west side of Manteca. The houses are two-story, stucco painted a terra cotta color, probably ten years old. These are obviously the homes of a recent wave of residents, the bay area commuters. San Francisco and Silicon Valley are about eighty miles away; I talked to a couple of people who commute from Manteca to Hayward and Manteca to San Jose (which has got to be closer than San Francisco.) 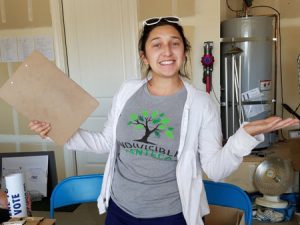 Lucia Nunez. I hope some day she runs for office where I can vote for her.

Lucia Nunez, a community organizer, is being paid by the California Democratic Party to reach out to voters in this area (California Assembly District 10). Lucia made a great first impression. If there are more people like her in the Democratic Party, I have hope for the future. We all milled around for a while until a few more people showed up, and when we did a count-off, there were 56 of us, all ready to go out and do… well, something.

We had filled out a practice voter registration on the bus. On the bus, Mary Jane told us that even though local organizers were eager to talk about Jeff Denham, the Republican Congressional Rep, we were to soft-pedal any discussion, because it was known that Mike Thompson had helped organize this trip. At first it was presented as a “professional courtesy” thing; gosh it could be awkward for Mike to work alongside Denham if Denham knew Mike were actively trying to unseat him. Actually, it’s a little more than that. There isn’t even a Democratic candidate in the district yet; the election for Denham is in 2018. Denham made national news when he promised in front of a town hall of nearly 1,000 people that he would not vote to repeal the ACA, and then voted to repeal. The state Democratic party sees an opportunity and so does the DNC.

Anyway, when we got to the house, it was clear local organizers had feelings about Denham. They had opinions. 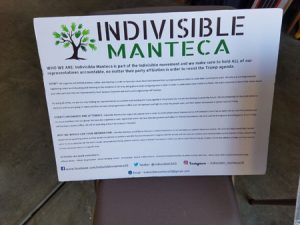 It was also still not really clear to me what we would be doing until finally, Lucia provided some training.

We did not need clipboards for this, except maybe the registration forms, because we had this handy app on our phones. It’s called MiniVAN. It is a canvassing tool. Once I understood that canvassing was the main deal, things became very clear. Still. 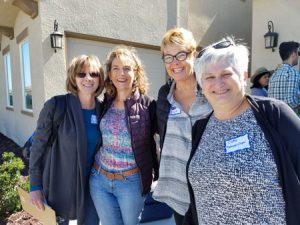 “They can have my clipboard when they pry it from my cold dead fingers,” I said.

However, I did register one person (one whole person!) to vote. Jo, my buddy, (everyone worked with a buddy) got one person to fill out a contact form to do more. Hurray, us!

The MiniVAN app is actually very cool; elegant and easy to use.

(UPDATE. I am writing this on Tuesday, June 13, 2017. The elegant and easy-to-use hold-in-you-hand data app appears to be one of many things the Russians were able to hack.) 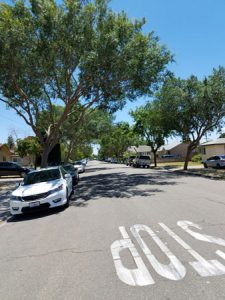 A quiet neighborhood drowsing on a June Saturday

Our drivers took us to neighborhoods closer to the center of town. These were older homes, a lot of 1930s/1940s vintage bungalows and cottages that had seen better days. Many households held two or three generations. Most people either weren’t home or weren’t opening the door; some greeted us and said they weren’t interested.

I knew intellectually that the Central Valley was conservative. I was still surprised, more than once, by the people who said they were Trump supporters. They had some things in common; they were forty-plus, and they were white. They said the same things too, things I often read quoted from Fox News. (All of us on the bus say the same kinds of things; just on the other side of the spectrum. It’s interesting.)

One woman said, “We need the wall. We need the wall to be safe; look at London.” Since we were there to take information, not debate, there wasn’t any point in trying to figure out how a wall limiting immigration from Mexico had anything to do with terror attacks in London. Except they do. Because Scary Brown People are… scary. And whites, in Manteca, make up less than one-half of the population. 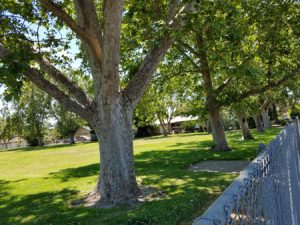 Some pretty trees in my neighborhood.

(I have some strong ideas about what makes a low-income white woman in her forties link terror attacks in London with brown people in the same town as her, but I think they belong in another post.)

Our first house was a lady with a lot of tattoos, who said she couldn’t vote because she was a felon. Her biggest political issue, though, was that homeless people in Manteca get, “Medi-Cal, they get food stamps, and they get free cell phones.” She didn’t know she was saying this to a former Director of Human Services and a former Assistant Director. It was pretty funny. And I don’t know how people in San Joaquin County are scoring those free cell phones.

One man said he was not a Trump supporter and his biggest political issue was that “I’m afraid he’ll blow up the country.”

We almost, almost got that guy’s son to register to vote, but he slipped the hook and swam free.

After we finished the first neighborhood, we went to the second, from the list that was on my phone. While I would guess our first neighborhood was low-income. The second, which was also low-income, abutted an industrial area and had a different flavor. We didn’t get to very many houses, and we chose not to approach a few. One really nice woman greeted us and said she had to be in Elk Grove by two-thirty and she hadn’t taken a shower yet, so, good-bye. At two thirty, when we were walking back to our rendezvous spot, she passed us in her car and waved. She was late.

However, this was the street where we found a woman who was interested in getting more involved.

A couple of the yards were fenced with loose dogs, usually pit bulls, in the yard. I am not afraid of dogs. I like them. I’m not afraid of pit bulls as a breed. The gated yard with a loose pit pull and a padlocked outbuilding with painted-out windows sent me a message. That message was not, “Welcome! Come up to the stoop and let’s talk politics.” We didn’t go to that house.

While we were waiting for our ride, I glanced up the street and saw what looked like a huge kite hovering over both lanes. I thought, who’d fly a kite in the street? Then the object tumbled, and floated across the lanes to crash onto the sidewalk and roll out of sight. It wasn’t a kite; it was a pavilion. The wind picked it up and carried it off. A moment later Jo said, “Look!” and there were two people (who hadn’t answered the door when we knocked) carrying it back over their heads like people portaging a canoe.

Did I mention it was windy?

Shortly after two-thirty we got back to the commuter house. We did a little bit of wrap up. Then back on the bus. 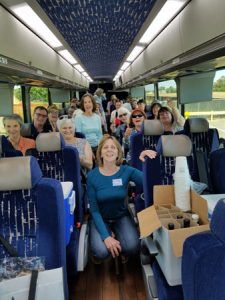 Jo and the bus crew.

We had one man who answered the door in a towel, but another woman topped us; they talked to a naked man. The woman said, “You know me, I’m an old hippy, so I just started talking to him through the window,” (where he was standing naked.) Then his wife came into the room and yelled at him to put some pants on.

With or without wine, I would do this again.

3 Responses to Canvassing in Manteca