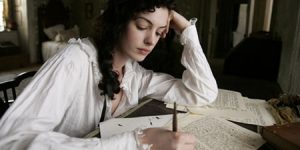 Even Jane Austen revised (as portrayed by Anne Hathaway)

If I have a strength as a writer, it’s as a rewriter. Revision is often where the “real” writing is, for me; where I’m able to see the opportunities to deepen the characters, to make the world around them more sensuous and three-dimensional, where I plug plot holes or trace glitches back to their sources and fix them.

At least that’s what I tell myself.

A while back I posted a short story called “Protected by Unicorns.” I had never made any effort to market the story; the story wasn’t much out of first draft when I pulled it up to look at it. That meant certain things didn’t happen that would normally happen in revision; like deepening the character of Tyler. In an earlier version I had more about Tyler, but it made the story too long –I’m aiming for 1500-word territory, and while I’m over that, it’s close. Also, I had to put in some mysterious stuff about store-owner Denise in order to make the ending work.

While I was posting it I noticed that I had several paragraphs in a row that ended with a sentence that started with “Maybe.” It didn’t flow like a deliberate style choice, because of course it wasn’t. I did a quick fix as I posted it, by deleting one of the sentences. This left two in a row, in a short collection of words. It reads as clunky.

Then I got to thinking, that with one more strategically placed “Maybe” sentence, I could show a little more of Tyler’s character. We should get that he is angry (he likes smashing things), and contemptuous of women – contemptuous of people in general. That’s in there already.

What about, though… what about something like this? Once he’s in the store, Tyler thinks, “Maybe, if Uncle Todd had given him the loan he’d asked for, this space wouldn’t be a stupid comic book store. It would be Tyler’s gaming store. But no, Todd got all superior and ‘show me your business plan,’ instead of helping.”

That’s not deep characterization, but it gives a genesis for some of the anger. It is a stereotype but this is, to some extent, a story of stereotypes. I think my take on unicorns might be outside of the mold, but that’s the only thing.

I’m going to revise the story and see what I think. And then, maybe, I’ll revise it some more. Because that’s just how I roll.