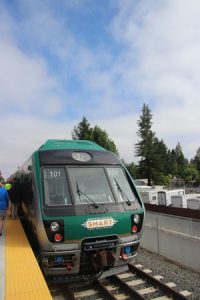 “Ladies and gentlemen, this train will be departing in two minutes, on our way to the Marin County Civic Center.”

I know my non-California friends are thinking, “Wow, a commuter train. Walk on the wild side, Marion, take a muni bus someday,” but, seriously, I am jazzed to be on the SMART train. Northern California doesn’t do mass transit well outside of metropolitan areas like the San Francisco Bay Area, and SMART may just be… a start. Rhyme intended.

The Sonoma Marin Area Rail Transit offered free rides over the Fourth of July weekend, and I drove down to the Rohnert Park station to catch one.

I got here at 9:30 to catch the 10 o’clock train. I was gratified to see lots of people already. At a small pavilion, SMART employees handed out information sheets, bike reflectors, SMART train squeeze toys/stress toys, and a thing that goes on the back of your cell phone for some reason. They answered questions. On the platform we had a few more employees and several more volunteers, called “SMART Ambassadors.” 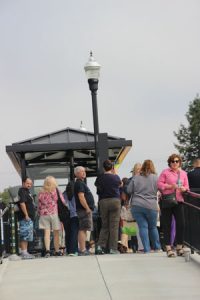 Busted flat in Rohnert Park, waitin for a train… 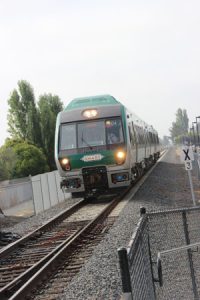 Safety tip; the train is not tilted; the camera was.

I asked several questions of a helpful man in a SMART hat before he told me he was neither an employee nor an ambassador, just someone who had followed the project.

A SMART train comprises two self-powered diesel cars. Between the two cars a train will hold about 340 people if you include standing room. Each train has a restroom and a “snack bar” although I think that might be the term they are using for vending machines.

There is an electrical outlet at each seat, (I couldn’t see ours, but I assume two outlets) and the trains have Wifi. Everything you could want. 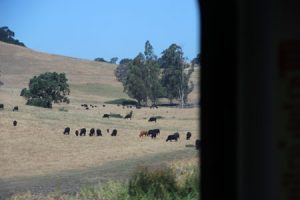 Cows and pastureland on the way to Cotati.

The Cotati terminal is off of East Cotati Avenue, close to the California State University of Sonoma campus.

My seat mate, Sean, has assertive ginger-orange hair and beard (he could definitely qualify for membership in the Weasley family,) light, bright blue eyes and a lime green backpack. He is here with a group, a class, and his teacher stops by our seat to explain how the restrooms work and where the vending machines are. Sean isn’t worried because he has a big bottle of soda and a carton of Goldfish crackers. He is set. I can’t tell how old he is… in his twenties? Later conversation gives me a data-point and I extrapolate that he might be twenty-six or twenty-seven. 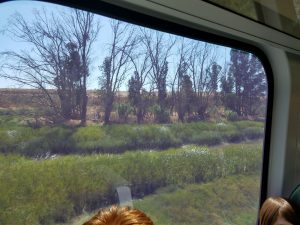 At the bottom off-center toward the left you can see Sean’s hair.

After Cotati, the track speeds along acres of pasture land broken by shallow rolling hills. We see cows. We see sheep. 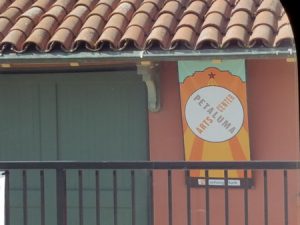 Downtown Petaluma Stop, and the Petaluma Center for the Arts

The downtown Petaluma stop is on Lakeville Street. It is either next to the Petaluma Center for the Arts, or it is the Petaluma Center for the Arts. Either way it’s good. In terms of walking, this might be the most convenient station. It is a long but feasible walk to what Petaluma calls the Theater District, and a still-feasible walk to downtown. If you bought a lot of stuff, it might be a bit of a slog back.

SMART is very bike-friendly, with room on the train for bikes and bike lockers at each station. Since the trains aren’t running yet, I didn’t see some of the other necessary things, like feeder buses. And for a system which prides itself on its accessibility within the traincar (it meets or exceeds ADA requirements, the material says) it doesn’t seem very helpful to people with mobility issues once they’re off the train. You’re pretty much in the middle of nowhere. 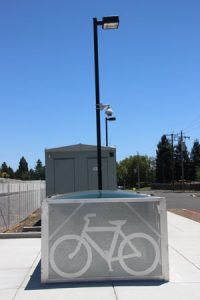 Here is a typical bike locker.

If you work at Clover Stornetta in Petaluma, or Minuteman Press, and you live north of town, the train might be a dream come true for you. 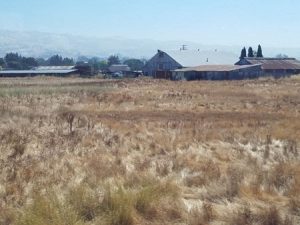 Barn and Pasture south of Cotati. 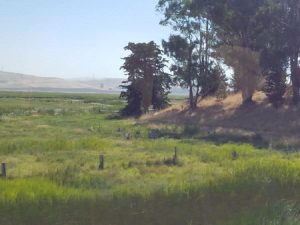 Sean tells me he writes fantasy stories. I tell him I do too. He reacts to this statement by showing me a passage from one of his stories, which features a woman wizard named Viola and her rabbit companion Beola. Sean does not use Wattpad or any internet site; he keeps his stories on his phone.

Sean draws cartoons in a manga-inspired style, and prefers graphic novels, so I suspect that is the direction in which the saga of Viola and Beola is headed. He also writes poems that double as song lyrics, and since he sings in a choir, he sings me one of the “spell” songs and it is delightful. We actually bond, not over writing, but over photography.

I am excited about the Novato stop for two reasons. One, for the first time ever I will be traveling alongside the wetlands area between Petaluma and Novato (and later, between Novato and San Rafael). They are the ones I can see from Highway 101 when I’m headed north, and can never photograph, because, of course, I’m on the freeway. Two, I’m imagining that somehow, the Novato stations will make it possible for me to ride the train down and visit the shopping Mecca of Grant Street. (This fond imagining turns out to have no basis in reality.)

Then I realize that for the Novato San Marin stop, I’m on the wrong side of the freeway for the wetlands, but there are plenty of other photo opportunities. 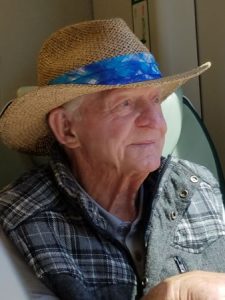 This man seemed to be having a good time and he was a great photo subject.

The San Marin stop is at 7700 Redwood Boulevard. It looks like, from southbound 101, you’d need to take the Atherton Avenue exit.

“My name is Alexander Hamilton…” Oh, no. Sorry.

Novato Hamilton is at 10 Gates Road, near the Hamilton Community Center. Marin Transit and Golden Gate Transit both have nearby stops, which may explain this location.

At one of the tables directly ahead of us (seats for four around a small table, perfect for snacking, playing cards, setting up laptops/tablets, or, here’s a thought, writing), a silver-haired woman says, “They need to make a Starbucks stop.” Her companion laughs and says, “They should build that in.”

Okay, not quite everything you need. You will need to bring your own specialty coffee.

Why does Novato have two stops, neither one in downtown, while Petaluma has only one? There are answers; one is, the difficulty in planning a long-range project and the other is, politics. Novato is getting a downtown station (so it will have three). Novato and the SMART board argued over who would pay for the downtown station but they finally came to some kind of an agreement.

Okay, so why the Novato San Marin station, then? Well, because Fireman’s Fund used to be right near there. After the plans were finalized and construction begun, they moved north, but maybe Google is going to move into their space, so it’s all okay? Maybe? All this is from a man I talked to from Novato, and I haven’t vetted any of it, but there’s this. 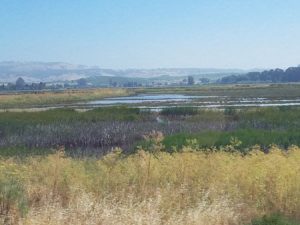 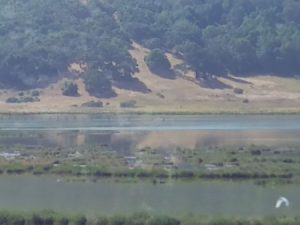 Now we’re alongside those wetlands. It’s the wrong time of year, or day, to see a lot of waterbirds; I do spy a heron and several egrets but I can’t get pictures. Sean likes pictures of rolling hills, so he and I are both pretty happy. I can’t wait to get a window seat on this train during flyover season.

Sean thinks the one SMART Police officer on the train is cute. “I’m hampered in my ability to flirt,” he says, because we’re in a seat ten feet away from her, with about fifteen people between us. I finally get a picture of her and send it to his email. 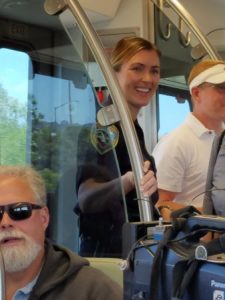 It is possible to see the famous Marin County Civic Center building from the train, but since there is a set of controls at each end of the train, it isn’t like I can walk to the back and get a good picture. The address is 3801 Civic Center Drive, and it looks like it would be a healthy walk, in good weather, to the center itself. And it looks like there were a few bus stops around. 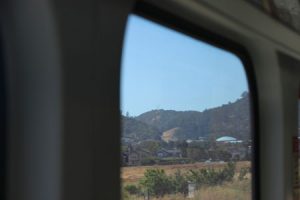 The Civic Center really is in this picture. 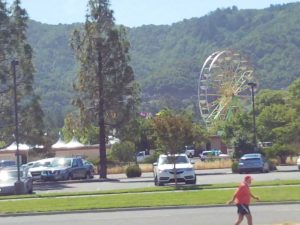 Currently, the stations (and the functional track) end at the transit mall in San Rafael, 630 3rd Street. At the point, since this is a single track system, the train merely reverses (controls at each end, remember) and returns the way it came. 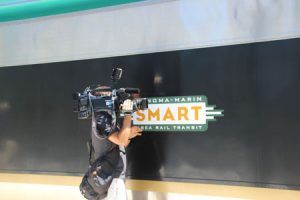 The rides are free this weekend only. We went thru three “zones.” The regular fee will be $7.50 one way regular fare for three zones, or $15.00 round trip. (The ferry is $19.) For people over 65, disabled people and youth, the cost is half that. A monthly pass costs $200 and covers unlimited rides for the first consecutive 31 days from the date of first use. Again, seniors, youth and disabled adults qualify for a $100 monthly pass. These costs don’t include the cost of any connecting transit. To ride the whole line costs $23 dollars and paying $23 allows unlimited rides that day, so for people who want to, I don’t know, have a meeting, this would be something to consider. 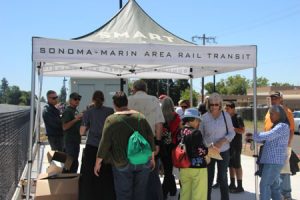 The Info and giveaway kiosk

If you live in Sonoma County and work south of it, this seems like a better deal than driving, when you factor in wear and tear on a vehicle and the increasing risk of fender-benders or another accident. And, the train gives you time to talk on the phone, work, read, watch a show, listen to music… or take pictures of birds, all things that are not encouraged while you are driving.

I think SMART has its work cut out for it; there is an education curve to deal with, and right now the schedule doesn’t seem convenient for many working people. That’s going to have to be addressed.

In the meantime, I will ride this train. I am seriously planning a ride to San Rafael, a jaunt along 4th street (perhaps a visit to Copperfields and Riley Street Art Supply) and then a trip back. Plenty of time to get some writing in, or some photographs. And I want to explore the north leg of the existing track too. 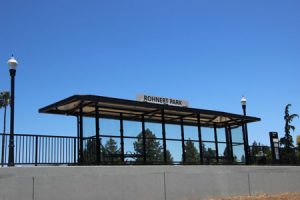 SMART plans to have track extended to Larkspur Landing sometime in 2018, which means, best case scenario, 2019, or maybe later since funding is dependent upon a vicious federal government whose administration doesn’t like California. When it reaches the ferry landing, though, the SMART train will be transformed in something truly awesome.