We Interrupt Scandinavia to Bring You– HawaiiCon!

2017 is the year I travel to islands that have active volcanoes. 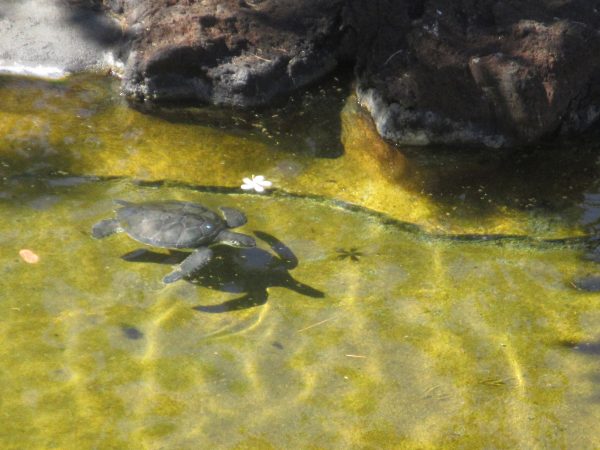 Honu and Hibiscus. The hotel raises sea turtles and releases them into the ocean when they reach maturity.

Last week I went to the big island in Hawaii for HawaiiCon. This year’s writer guest of honor was Nnedi Okorafor; basically that’s worth the price of admission right there. Okorafor wrote Who Fears Death, the Binti series, the Akata series and Lagoon, along with many other works.

The media guests (and HawaiiCon’s roots are in media cons) included four —four!– actors from the Buffy the Vampire Slayer series. Nicholas Brendon (Xander) hosted the ziplining for them one entire day, then kicked of the Buffy “Once More With Feeling: singalong.

Oh, yeah, did I mention that HawaiiCon is held at an Hawaiian resort? The Mauna Lani Bay Hotel and Bungalows is like those places you see on TV or in that movie Forgetting Sarah Marshall, with Kirsten Bell. The grounds– I want to say complex– includes ziplining, a golf course, kayak and snorkle rental, shuttle, shops including a grocery store, in-pool and in ocean swimming… plus a lengthy walking path around some old Hawaiian fish ponds. Normally, nearly a week at this place would be out of my reach, or at least wildly unrealistic, but the Con rate this year was $175/night. It won’t be that good next year, but it will still be great compared to the hotel’s regular rates of about $400/night.
Included in the room rate are a couple of discounts for snorkling and kayak-rental. 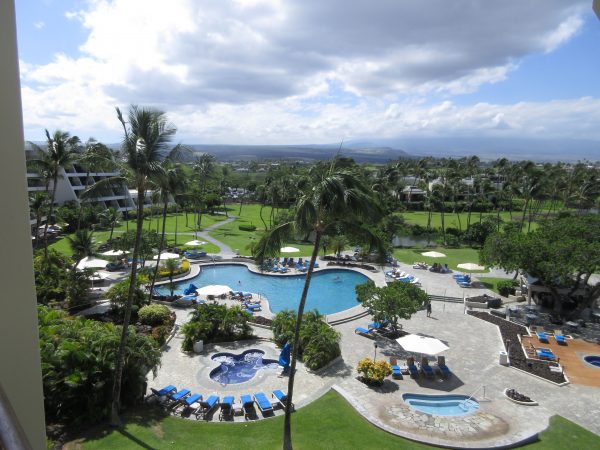 Back to the media track… besides Brendon, Emma Caulfield (Anya), Amber Benson (Tara) and Charisma Carpenter (Cordelia) showed up. I only ever saw Brendon as he was walking around the atrium or meeting folks to guide them to the zip-lining. We nodded and said “Hi” twice; he seems exuberantly friendly. Patricia Tellman, who played a telepath on Babylon Five, is a loyal regular (she lives on the island).  G.K. Bowes, an amazing actress who is making a name for herself in voice-work, and her son actor Kannon Kurowski, attended as well as New Zealand transplant Daniel Logan, who plays young Boba Fett. 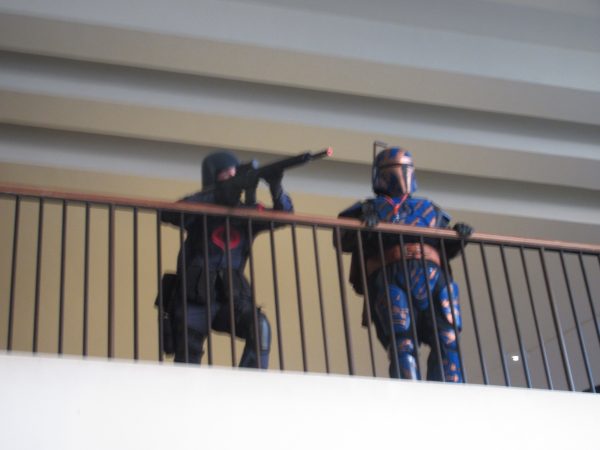 I’m sorry I missed Amber Benson since she is both a both a writer and a reader, literally, a voice actor for audiobooks, but otherwise, the media track doesn’t interest me a lot. I saw Daniel on two panels and talked briefly with him at the food trucks one afternoon and he impressed me. I will definitely seek out the anime films G.K. Bowes has voiced.

Second to the media and cosplay track is the science track. I come to HawaiiCon for the writers track because I’m part of it, but I love the science track, which has expanded to include some serious and insightful discussions of what our popular culture feasts like Star Wars have to say about culture.

Volcanoes of Hawaii.
Volcanoes in Film… what Hollywood gets right and what it gets wrong.
Squid farming.
Build a pasta tower (using uncooked pasta).
SF, science and the sacred.
Hawaiian heiaus (ritual platforms), and what they tell us about the Polynesian migration.
The cultures of Star Wars.

The writing track is small at HawaiiCon, but it is growing. Last year there were five writers and three were self-published. This year there were nine writers, and in addition to Nnedi Okorafor we had Wen Spencer, a fan favorite who publishes with Baen, Cynthia Felice who is considering reissuing her well-known work from the David Hartwell Timescape line, Marta Randall and John Hedkte, who has published nearly thirty non-fiction works. There were many more writing panels than last year, and the writers workshop was packed,the audience begged us to go another hour. I think things are coming along on that front.

Marqueeda LaStar and Leonardo Faierman of the lifestyle site Black Girl Nerds were in attendance, and Marqueeda provided a lively interview with Nnedi.

Rod Roddenberry (Eugene Roddenberry Jr) is a fixture at the con, and he provided a relaxed Q&A poolside. One of the hallmarks of the Con is that things are… relaxed. You may end up sipping an umbrella drink in the poolside bar with the celebrity or writer you just heard on a panel, or wading in the ocean next to a Star Wars player or a fantasy writer.

In my case, I had drinks with the two geologists who did the volcano panels, and a friend of theirs from Hilo, who is a biologist and who talked about endangered species on the big island. Another time Nnedi and I caught the shuttle back from the shops, and talked about HBO, the swordfish from her book Lagoon, and the koi in the pond under the portico.

And there is cosplay, notably a contest Saturday night. Cosplay is now big enough that there are panels about it.

I might provide some more in-depth columns later. As I am writing this, I glance at the clock in my hotel room and realize I need to be packing, because I fly home tomorrow. Here are some links. Next year promises to be every bit as fun and beautiful. Check it out.

Here’s the home page. And here is the blog.

Here is information on the venue, which will be the venue for 2018 as well (they’re already signed a contract). 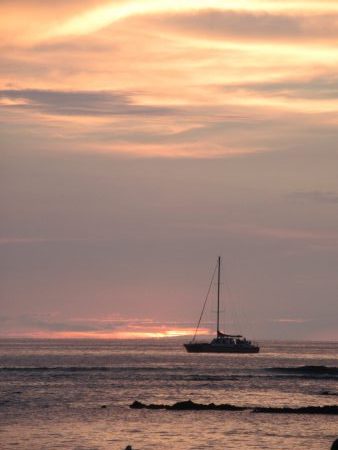 Sunset with the catamaran than provides the sunset cruise.

2 Responses to We Interrupt Scandinavia to Bring You– HawaiiCon!