I volunteered for two shifts, on different days, at the library’s gift-wrapping station. Their slogan, “Buy local, wrap local.” Bring your gifts to the library and we will wrap them for you, or help you wrap them if you prefer.

My first shift started at 4:00pm on Friday. In my imagination, I was well-prepared, showing up with water, snacks and a book for slow times. I even had the book; Mary Oliver’s A Poetry Handbook. I’d been dipping into it in the evenings. It would have been the perfect book for a stint with slow spells and flurries of activity. 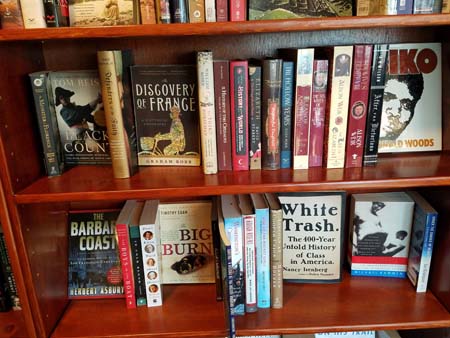 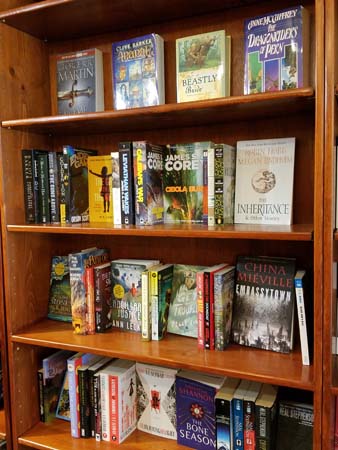 Here are some more.

I spent most of that day, though, helping my friend get her store ready for her soft opening, and when I arrived at the library I had only one of my three survival-kit items; water. There was some good news, though. I was in a library. They had books. And the Friends of the Library (which was where I had heard of the activity in the first place) had a big sale table with paperbacks for fifty cents. I spent a dollar—because why not?—on a copy of Mrs Dalloway by Virginia Woolf. While I waited for customers, I followed Clarissa Dalloway as she left her house that lovely June morning, the morning of her party.

A confession first, that will surprise no one who knows my lowbrow genre reading tastes: My favorite Woolf book is Orlando. Naturally I love the story about a nearly-immortal character who changes sex and lives nearly four hundred years. To the Lighthouse is my second favorite. I have read excerpts from Mrs. Dalloway but never read the book.

The table was not staffed when I got there. It wasn’t staffed either day when I arrived, but it functioned as a self-service wrapping station quite well. When I showed up on Friday, an eleven-year-old girl was wrapping a present by herself. I offered to help, she politely declined. She was wrapping a gift for her teacher, she said. She was doing a pretty good job but she was using a lot of tape. I showed her the trick of folding in the sides of the paper first, then the bottom and top. “And less tape!” she said. She had picked bright red and light green paper with elves on it, and she chose a snowy white bow for the top. I think her teacher will be happy. 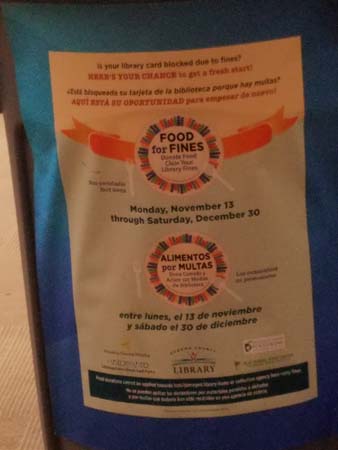 Food for Fines, an amnesty program.

Mrs. Dalloway is a reminder of how interested in mind, in thought and in memory, Woolf was, and how deeply observant, not only of the people around her, but her own mental processes. Woolf adeptly captures that chattering mental voice (my Buddhist friends call it monkey-mind), the voice that I imagine as coming from the front of my skull somehow. In a deep third-person point of view, Woolf’s circular, discursive sentences, the repeated phrases, the pauses, the contradictory clauses all ring with the truth of the voice in our heads. And how apparently effortlessly she glides out of one person’s head –I meant to say “character’s,” but these are people—into another’s, sometimes drawing back out of all of them to give us an omniscient point of view of an airplane or a motorcar before slipping cleanly back into Clarissa’s mind, or Peter’s, or the seriously troubled Septimus Warren Smith’s.

Clarissa Dalloway, Richard Dalloway, Peter Walsh and Lady Bruton, who are all of a certain class, think in the words and rhythms of that class. They think in clichés, but this is not a failing of the writer. Woolf chooses those phrases with intent, those collections of words that imply a meaning without producing one, a mirror image to the observation that Septimus Warren Smith is beginning to give words “a symbolic meaning.” For the Dalloways and their neighbors, these phrases reassure. They protect people from real memories, real insights.  Here is one of my favorites, as Lady Bruton greets Hugh Whitbread for luncheon. Whitbread, although he has influence, is often mocked behind his back.

“… But she wouldn’t let them run down her poor dear Hugh. She would never forget his kindness – he had really been remarkably kind – she forgot precisely on what occasion.”

The gift-wrapping station is set up between a bank of self-checkout machines and the coin-operated self-serve photocopier. For a gift wrapper, this means at any given time there can be somebody or somebodies moving about doing things, right over their shoulders, out of view. If you’re mildly paranoid, this can be uncomfortable.

Septimus Warren Smith displays the symptoms of Shell Shock, which we now call PTSD, certainly. But there is a darker current running underneath those characteristics; the delusions, the voices. Does he have schizophrenia?

A slim woman in a bright purple sweater came up to me. Her hair was tarnished-silver gray and cut in a bob. “I have a question,” she said. “You do free gift-wrapping, but where do the gifts come from?”

“You buy and bring your gifts and we’ll wrap them for you,” I said.

She stared. She put her hand over her mouth and started to laugh. “Of course!” she chortled, shaking her head. 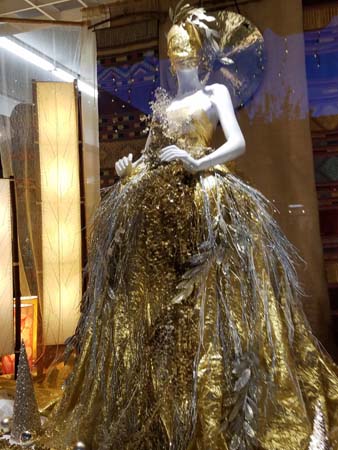 The golden dress. This window is dedicated to all the first responders, a holiday Thank You.

“Shredding and slicing, dividing and subdividing, the clocks of Harley Street nibbled at the June day, counselled submission, upheld authority, and pointed out in chorus the supreme advantages of a sense of proportion, until the mound of time was so far diminished that a commercial clock, suspended above a shop in Oxford Street, announced genially and fraternally, as if it were a pleasure of Messrs. Rigby and Loundes to give the information gratis that it was half-past one.” 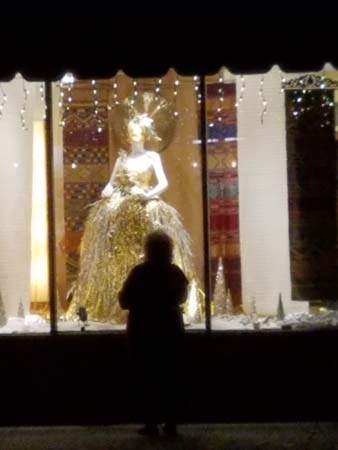 I wrapped a Giant Book of Madlibs for a woman. It was for her grand-daughter. She got it at Copperfields…. I may have to go get one.

For another woman I wrapped a book of activities to do in Napa and Sonoma counties. She bought it for her mother who just moved here. She also bought a beautiful book of wildlife photography, and I wrapped that in dark blue paper with silver stars.

The library is offering a fine-amnesty program, Food for Fines, through the end of the year. Bring some canned food for the food bank, and they will expunge your fines.

Throughout the book, Clarissa orders, exhorts, pleads with people to, “Remember the party! Remember my party!” Woolf never needs to use words like “plead,” or “exhort.” The placing of the dialogue, the cadence of it, carry Clarissa’s panic nicely. Clarissa is fifty-two. Her only child is an adolescent who has been drawn into the circle of a bitter, deeply religious woman who is completely different from Clarissa. Clarissa’s husband was invited to luncheon at Lady Bruton’s, whose luncheons are said to be most amusing, but Clarissa was not included.

Clarissa is a perfect hostess. Everyone says so. Even Peter Walsh, who says it to wound her (because she could, somehow, have been so much more), says it. So why is she so anxious?

On my second-day shift a stooped, white-haired man came up to the table. He put down a tiny bath-duckie. I wondered if he wanted me to wrap it. It’s a working-class duck, with a hard hat, a safety vest and a sledge hammer over one shoulder, if ducks have shoulders, if bath-ducks have shoulders. “This is for you,” he said. 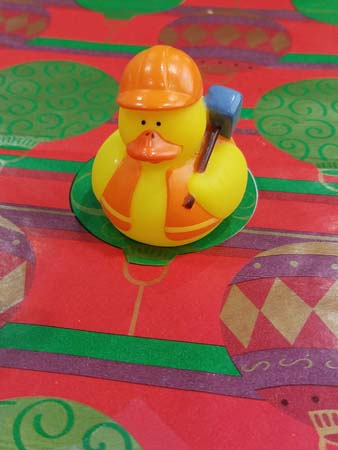 The first day, when I left at six, it was dark. Despite my coat and the fact that the bank’s temperature sign read 57 degrees, I could not stop shivering as I walked to where I had parked my car. Main Street was lighted up, and those balls of lights that look kind of silly and even cheesy during the day looked like magic. 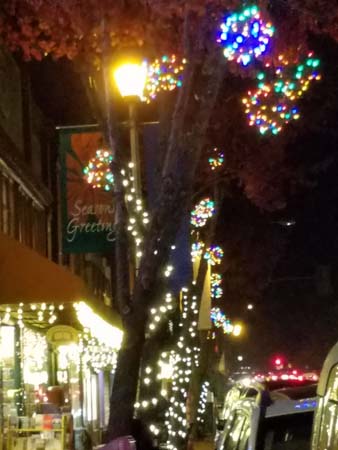