I finished watching all of Season One, and I find I have more quibbles with the final four episodes on a second viewing.

I still enjoy the show; I am eager for Season Two, especially since Fuller and Green tried to end on a cliffhanger, with the tour bus carrying Bilquis headed to the House of the Rock. 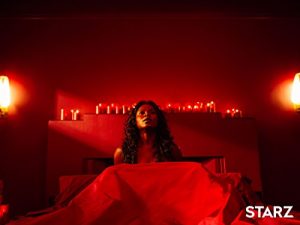 Bilquis is one serious god-queen.

I love that Bilquis and Ostara, who were minor characters in the book, have been elevated to secondary player status here. That’s all to the good. I love Neil Gaiman, but he never did write good goddesses until The House at the End of the Lane. His earlier female gods were all bit parts, and almost all just temptresses. In Sandman, the god character who fulfills the function of Bilquis works at a strip club. This is a male view of female deities. Being stared at while you swing around a pole when your calves hurt and your breasts hurt and you hope you can make enough in tips to get the car fixed and pay the rent, and you hope nobody gets rough with you in the parking lot—again– is not worship*. It’s not new and it’s not particularly insightful. Maybe Fuller and Green are going to do a bit better with it. 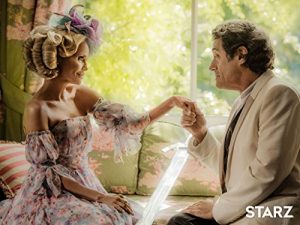 Ostara in her demure aspect as Easter.

So, goddesses, good. On the flip side, while the plot elements of “Death of a God” advance the story (finally!), the creation of the town of Vulcan is stereotypical and overplayed. I do love that we see the town from Shadow’s point of view, and there is so escaping just how scary it is. Corbin Bernsen does a great job as the lame god of the volcano and the forge.

I thought the stereotyping of “gun nuts” was overdone, but I can accept that Vulcan, who was the god of blacksmithing, would morph into the god of the gun. I didn’t like, “Every gun fired in a crowded theater is a prayer to me.”  Well, is every shot fired by a hunter bringing food home for his family, every shot a woman takes at the rattlesnake gliding along the edge of her patio where her kids play also a prayer to Vulcan? Certainly, fear is a big part of what drives a vocal group of gun-owners; many other gun owners have different views. The show tries to do a disclaimer with Wednesday’s speech as they roll into town, but it seemed too easy. And Vulcan’s casual bigotry is baffling, unless he was directed to treat Shadow that way as an insult to Wednesday. Shadow seems to think so… but it wasn’t clear to me. It felt like the showrunners were relying on the tropes they’d set up – gun nuts! Company town! Weird uniforms!—to do their work for them.

However, the ending, and Wednesday’s curse, were great stuff, and I hope we see that curse play out in future seasons.

Things I loved in the final four episodes:

“A Prayer for Mad Sweeney.” The backstory had little to do with the plot but it was sweet, sad and beautiful. This is a thing a visual medium can do that print medium cannot; by casting the same actors as two different sets of characters, it creates a connection between those sets. Thus Laura and Essie McGowan (Tregowan in the book), resonate with each other, and the episode made me like Laura better. And Mad Sweeney is confronting his conscience over killing Laura. This works, and works well, because of Emily Browning and Pablo Schreiber. 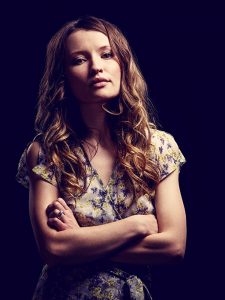 I don’t think Laura’s dead yet in this scene.

In “A Lemon-Scented You” I liked that we finally see Mr. World, and that, even though he is what he is, he is clumsy operating in the real world. He needs Media to, well mediate for him. Of course, this again is a traditional female role, but Gillian Anderson has risen to the challenge. I liked the strange, suspenseful face-off scene that quivered with danger. I liked the cop who interrogated Shadow and I was sad when she was killed.

(Mediated reality is what we live in right now; a world where we are bombarded by data… “information?”… that assumes no moral requirement to be accurate or honest. Our experiences are shaped, curated, edited, second hand. “Pics or it didn’t happen.” When Wednesday says, “You fill their time; we gave them meaning,” true or not, that’s what he means.) 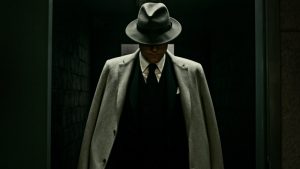 Of course I loved Kristen Chenowith as Ostara/Easter. I loved her pastel house. And I love Orlando Jones as the spider god Anansi and I hope he continues to make appearances.

If Fuller and Green do the stereotypical thing with Selim and the Djinn, I will be vey angry. And since that will be all them (because these were minor characters in the book) I will probably stop watching.

And, it’s hard to talk at all about American Gods without taking a moment to mention the astonishing Ricky Whittle and the brilliant-as-always Ian McShane. 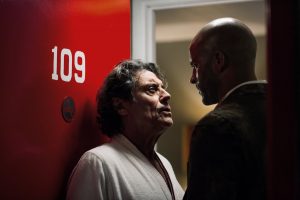 *No, I don’t know from personal experience, but I have talked to three different women who did exotic dancing. For two of them it was in their distant pasts. None of them necessarily hated it—except for feeling unsafe—but no one felt especially worshipped.

All images are courtesy of STARZ via IMDB.com