Spouse and I listened went to the Sebastopol Library to hear the Santa Rosa Young People’s Chamber Orchestra.  The email notice I got called this event a Dress Rehearsal, but it wasn’t that, as least not by every definition I know. I’d call it working rehearsal, because the lead violin/conductor stopped them at several points, repeatedly, to have them perfect an polish a passage. It wasn’t a concert but it was pretty fascinating.

The first amazing thing was the transformation of this group of mostly teenagers who straggled in, checking their cell phones, sipping their coffee drinks and propping them up on their music stands, into a complex, coordinated music group. 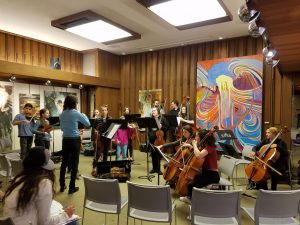 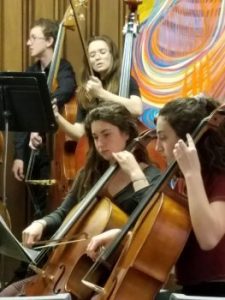 Some of the cellos

I don’t know much about the vocabulary of music, and this was like a seminar. Halfway through the first piece, by baroque composer Heinrich Biber. He focused on the first violins, discussing volume and phrasing. It was the first time I’d heard the term “chippy” for bow-work. “I want to sound more… chippy. Not like you’re just sawing with the bow.” 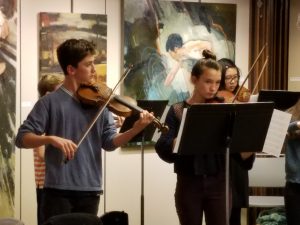 He could tell when one violin came in one/sixteenth too late, or when the cellos were bowing too hard. 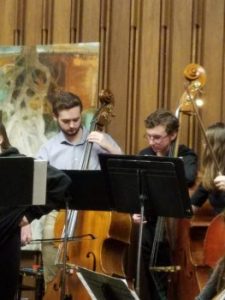 I think the community room is not well-designed acoustically for this type of performance, but I could tell the difference between the cohesion and the flow of the sound before and after his tutorials. 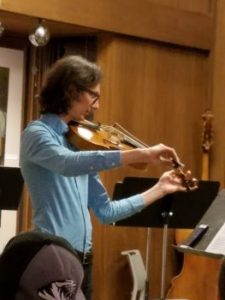 We stayed until the first break– they’d made it through two complete pieces.

The performance is Sunday at the Phoenix Theater in Petaluma.

This entry was posted in View from the Road and tagged Chamber Music, Music, Sebastopol Library. Bookmark the permalink.