Bones is Back, Baby! 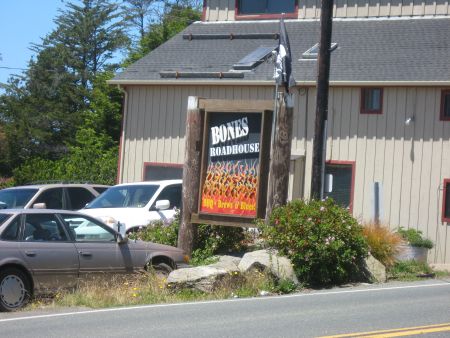 Bones is back!  In the space that the Meza Grill had, it fills Main Street with the rich aroma of barbecue.  At noon on Friday its parking lot was packed.  Yeah, baby!

I’m not a barbecue expert.  I don’t even watch the barbeque shows on The Food Network where they coat the meat in a rub with all kinds of spices, and put it in the slow cooker for 20 hours, and talk about what kinds of wood to use, etc.  All I know is that the brisket at Bones is succulent and tender, the sauce is piquant without being overpowering and the coleslaw is great.  Serving staff are friendly, and they have live music.

Bones used to be down the road less than a mile, next to the Breakers Inn, but they had a fire.  A bad fire—like, burned-to-the-ground fire.  A fire of, shall we say, suspicious origins.  If I were a fledgling novelist—oh, wait!  I am!—setting up a mystery story in a tiny, isolated coastal town in rebellious Mendocino County, California, I might start with something like this:

Hero—feisty, bold barbeque chef who is making a go of his restaurant.

Landlord—old money, well established in town, used to getting his own way.

Remember this is fiction.

Then I’d have the landlord’s son decide that he could make a go of a restaurant in the location the feisty barbecue chef has, and try to get his dad to break the lease.  I’d have a public altercation between Landlord’s Son and Feisty Chef—in which harsh words are exchanged.  And then, six or seven hours later. . . like between the hours of 11 PM and 1 AM, for example, I’d have a guest in the hotel across the street call 911, reporting flames. 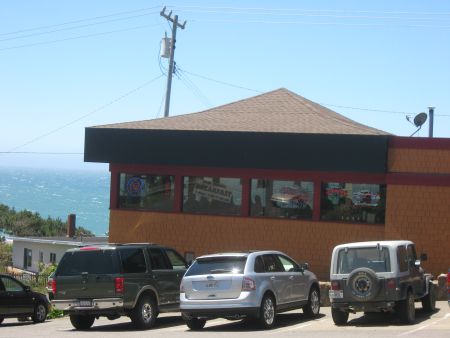 But my story is  just fiction.

This entry was posted in View from the Road and tagged Arson, Barbecue, Bones, fiction, Gualala, mystery, Restaurants. Bookmark the permalink.

3 Responses to Bones is Back, Baby!