I Am In Seattle!

My room space is nothing like the palatial digs of the Embassy Suites in Portland. It is efficient; reminding me a little bit of my hotel room the first two nights in Reykjavik. I have everything I need without a lot of frills. It feels very executive. That’s good, because this is the Executive Pacific Hotel. It’s right downtown, four blocks to the waterfront. Four blocks down to the waterfront and four long calf-workout-aching blocks back up to the hotel. Exercise is grand!

This building, which I can see out my window, is the Seattle Central Library. It is pretty amazing and I’m looking forward to checking out the interior tomorrow. 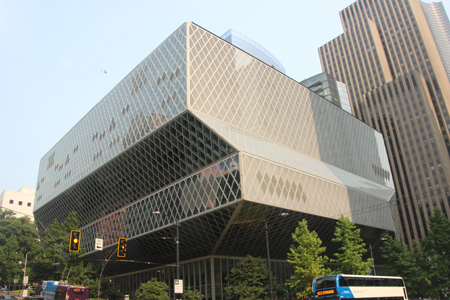 This is the Smith Tower. It was, the underground guide said, the tallest building west of the Mississippi until the 1970s. I hadn’t known that, although I did know that there used to be a radio station that broadcast from it. 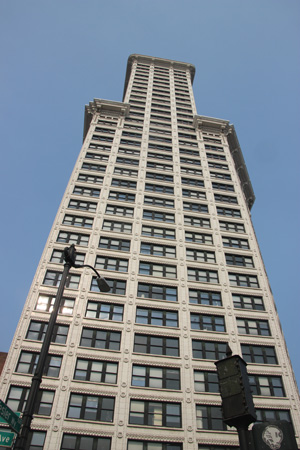 And, plenty of stunning architecture, including embellishments on nearly every building, like this. 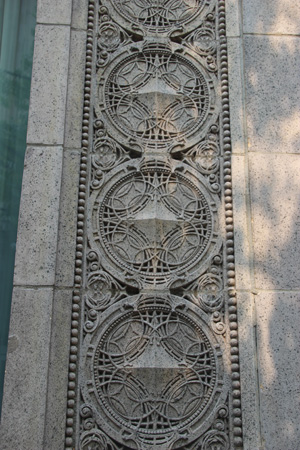 I hiked my way back up the Spring Street hill to the hotel and stopped for dinner at Vovito, which is connected to the hotel. It’s a coffee/gelato/pizza/samosa place and that isn’t as weird as it might sound. I had a vegetable samosa and two flavors of sorbetto on the “happy hour” special and it came to $12 with the tip. The passionfruit sorbetto was exquisite. Anyway, it made a nice dinner after the longish walk. Tomorrow, when I’m awake, I’ll post some more photos.