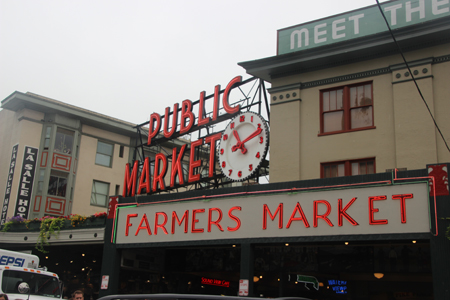 The second time I decided to ship something from the fish market to a certain person — okay, I’m no good at being coy, it was Spouse. The fish market ships anywhere in the US with next day delivery. I did all the paperwork, they swiped my card, and handed me the slip to sign. Meanwhile they got started on the woman behind me who was shipping home some prawns. “Wait, wait,” the guy said to me. “Just one more thing.” I’m holding my receipt and my card and I’m like, what? Dude, only two hands here, and he hands me something in a square of waxed paper and it’s smoked salmon. And it’s a big chunk of smoked salmon. He handed one to the other lady too. 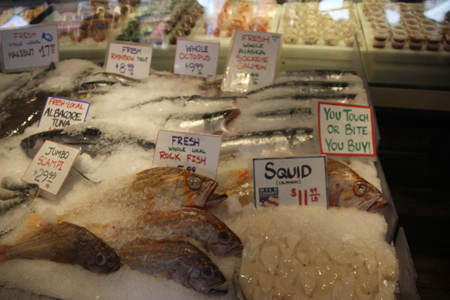 Just a small sample of the fish market’s selection, but if you touch it, you just bought it.

I noticed that she held her waxed paper and daintily plucked off shimmering pink shreds of the smoked meat. Not me. I was eating it like an ice cream cone. I took one bite and stopped, eyes closed, in the middle of Pike Place Market (not that I’m the only person to ever do that), my credit card still in my hand because I was totally HAVING A MOMENT. Having a food moment. 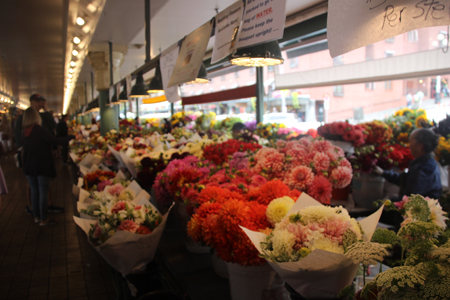 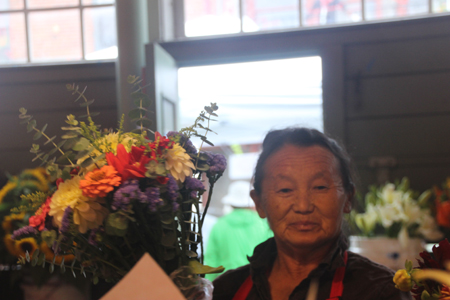 A flower vendor who graciously posed for me. She IS smiling.

Pike Place Market was the city’s original farmers market and goes back to the early 1900s. Probably it didn’t sell as many postcards or “Pike Place Pig” charms back then. I imagine horse-drawn carts unloading vegetables, fruit, grain and cheese, freshly butchered meat, and maybe some fish although I don’t know how much fishing was done at the turn of the 20th century. The regrade project dumped tons of silt into the harbor and there was a massive fish die-off for several years, but it’s possible the population had recovered by the time the 20th rolled around. 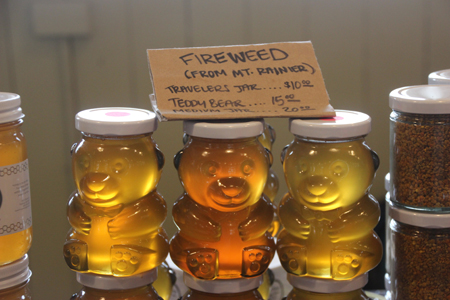 Mt Rainier honey with sunlight shining through it.

Fun fact; the north-south axis of downtown is much flatter than the east-west. This morning, I walked straight down to the waterfront and then back on the east-west, up he hills, and my calves aren’t speaking to me. This afternoon, I had to go find the Bon Marche department store (now it’s a Macy’s) and that meant walking north on 4th street. Google even said, “This route is mostly flat.” And it was! After I found the Bon, I headed west again on Pike Street and there I was, back in the market. 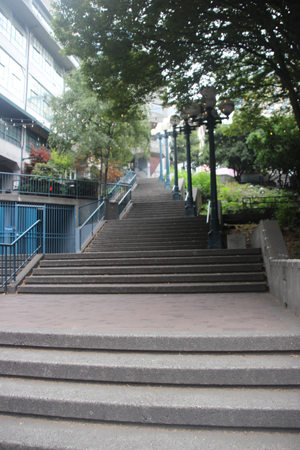 The stairs from Alaska Way up to Pike Place. These are only the beginning.

And then there is the art. 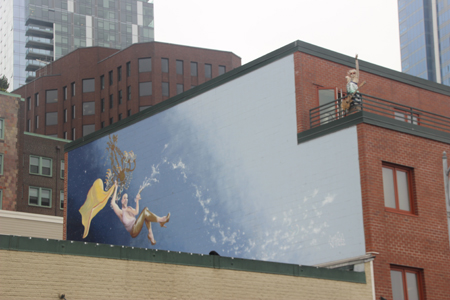 And then there is the art.

This entry was posted in View from the Road and tagged farmers market, Pike Place Market, regrade, Seattle. Bookmark the permalink.