Tea at the Olympic Hotel

The Olympic Hotel opened in 1924. It was a grand, opulent place meant for the wealthy movers and shakers of Seattle. Since the novella I’m finishing up  research on has a scene in the Olympic and one nearby in an alley, it was one of my planned visits. Then I discovered that the Georgian Room, located in the hotel, serves fancy afternoon tea – you know, delicate nibbles usually provided to women in big hats. 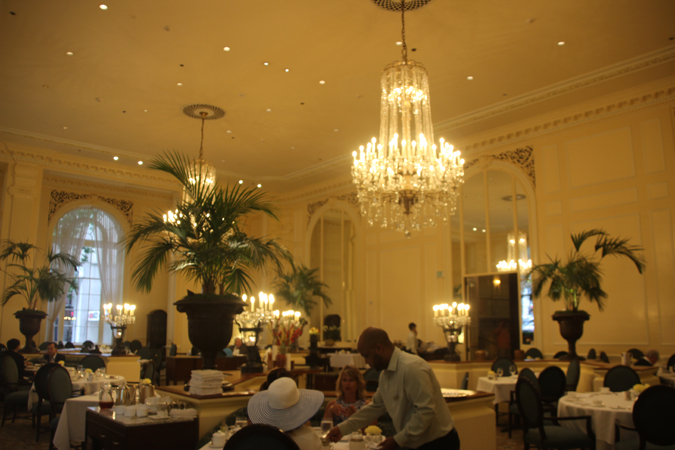 Tea drinkers in the Georgian Room. One lady does have a big hat.

(Note: I did not wear my big hat because it was foggy that day.)

Before I talk about tea at the Olympic, a brief note about the other scene. In the novella, the ingenue character slips away from a party-planning meeting at the Olympic (her engagement party, as it happens) and meets her secret lover—okay, well, not-so-secret lover—in a nearby alley. The main character follows her and catches them.

This meant I needed to find an alley near the hotel. I’d looked at maps on Google and paper maps and “made up” an alley between 4th and 5th Streets, connecting Spring and Seneca. I was really hoping there was an alley there. To my delight, there was! As a bonus, the outside stairs from my hotel, the Executive Pacific, ended in that alley. Hurray! My search for another alley needed in the story was not so successful, so this was a standout.

I made a reservation at the Georgian Room for tea on Thursday, which was my first full day there. The marine layer visits downtown regularly in the summer, and it was a welcome relief to me after driving though hot, fire-ravaged, smoke-clouded northern California and Oregon. Coming along Lake Shasta had been like driving through an apocalyptic movie – it was like driving through fog, only it was both blue and coppery, and 90+ degrees outside. 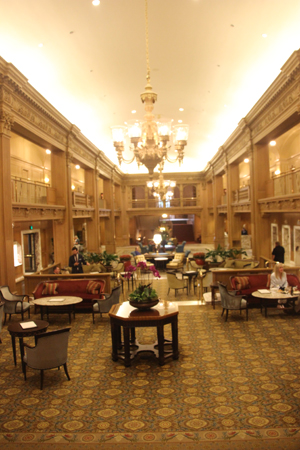 Oh my gosh! That lobby.

But back to tea… I went back to my room after visiting the waterfront and changed my jacket because the dress code (yes, dress code) for the Georgian is “business casual,” so I brought a jacket that matched my slacks. And walked over, through that vital alleyway. It appears that through a terrible oversight I did not get a picture of the Olympic entrance; but the book I bought corrects for that in most respects. The hotel is currently operated by Fairmont, and the building is on the registry of historic buildings. First I walked into that – gasp! – lobby. I looked right and there, up a few stairs, was the Georgian Room. I went in, where this young lady greeted me. They had my reservation and the table was all set up for tea – which is a different setup than for a lunch. I asked if I could take her picture. 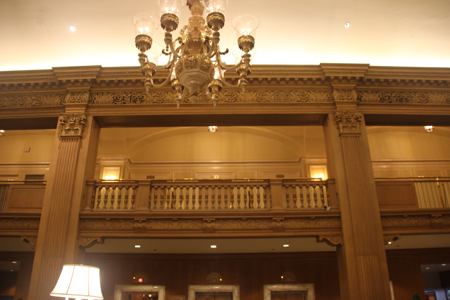 “Of course! Do you want me looking at the camera, or working?” She smiled. “Or pretending to work?” 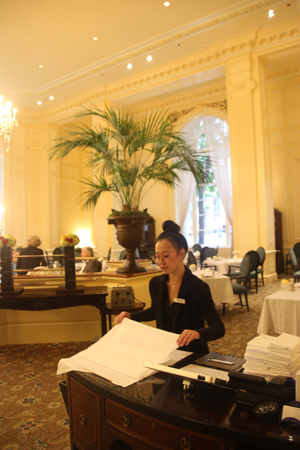 The pleasant and hard-working hostess.

I opted for working/pretending to work so she folded some napkins. (It looked like actual work to me.) Then she guided me over to my table, near the back wall, close to one of the two private dining rooms. My table didn’t have a chair. It had a settee.

My reservation was for 1:15. The place was nearly empty; two tables held tea-partakers, and two others had duos, both male, all four in suits. I can imagine my characters, Fiona and Tony, the two who have been directed into an arranged marriage, being dragged here for tea by Tony’s strong-willed mother. I watched the two tables of guys in suits. They did not look like brash young tech startup dudes, who might have business meetings at a strip club or at one of the many Starbuck’s “Reserve Tasting Room” coffee houses. No, these guys looked like they already hang out in the E-suite of established mega-corps. They might get booted out of their companies in four or five years, with mere $40 million bonus/parachutes, but right now they are sleek, self-satisfied and enjoying their cocktails.

The trio of women directly across from me, one of whom did have a big hat, was having the champagne tea, which costs $64 per person. A note about sales tax in Washington; Washington has no income tax, and sales tax is 10% on everything. “Everything” includes food. That $64 price is before sales tax.

The un-champagned tea cost $49. I added a bottle of sparkling water which boosted the price, plus the sales tax. (This was basically my meal for the day.) Tea had three courses; berries and fruit, scones, and an array of tea sandwiches and petit fours. The berries were served in a martini glass with a couple of mint sprigs. The scones were white chocolate cherry, and there were two. Lastly, the server brought out the famous tea stand with three levels. There was a chicken finger sandwich, a tomato basil sandwich and a tiny savory quiche, a matcha tea flavored petit four, a chocolate thing that looked a lot like a truffle, and a macaroon. All the food was beautifully presented. 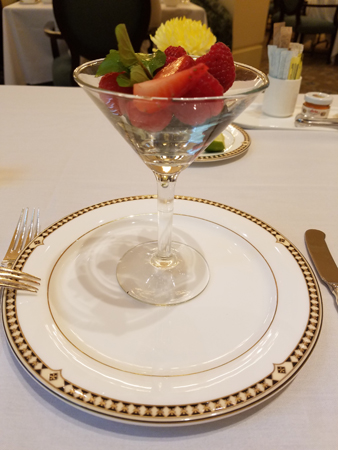 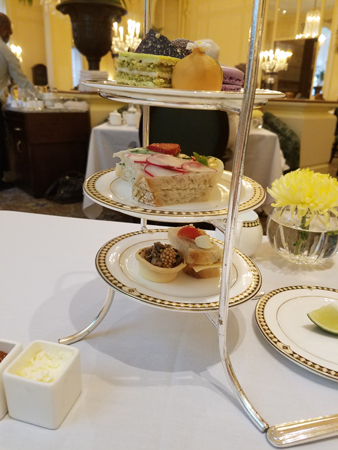 And the tea stand, loaded with finger-sized sandwiches and sweet treats.

I had golden dragon jasmine tea, which was fragrant and a rich amber in color, and blew my reduced-caffeine regimen straight out of the water. The tea was wonderful. The food was good but not exceptional. I have had better scones locally. Nothing was bad, and I was mostly there for the ambience anyway. I doubt anyone goes to “afternoon tea at the Georgian Room” for the tea cuisine. There was enough food left that I took half of it back to my hotel and snacked on it the rest of the trip. I had the scone with Pike Place Market raspberries for breakfast the next morning. The chicken sandwich and the petit four were dinner my last night there. 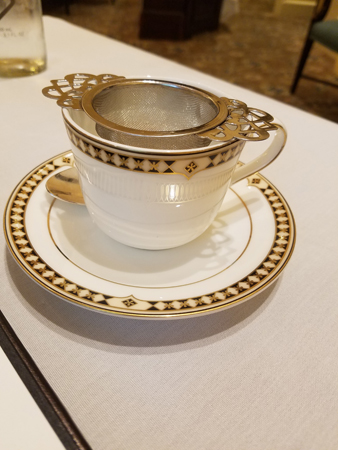 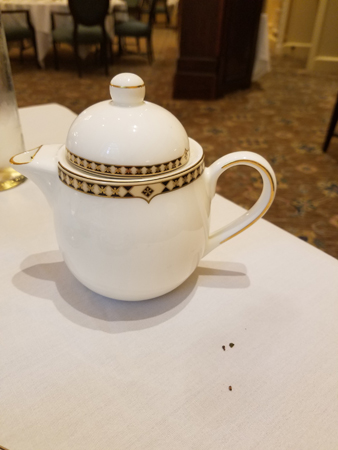 The server filled my teapot with loose leaves and hot water.

The walls in the Georgian Room, painted pale yellow with white trim, must be twenty feet high. The named streets run roughly east-west in downtown, and the University Street side has tall, arched windows. The inner wall has fifteen feet tall mirrors that mimic those windows. They need ceilings that high just to have room for those chandeliers. The sideboard held a collection of Dale Chiluly glass. 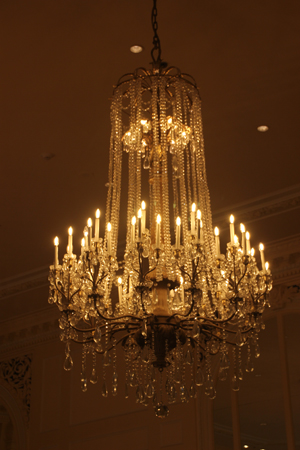 Just one of the crystal chandeliers. 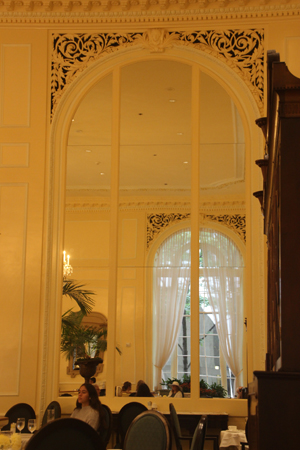 Mirrors on the Georgian Room wall. 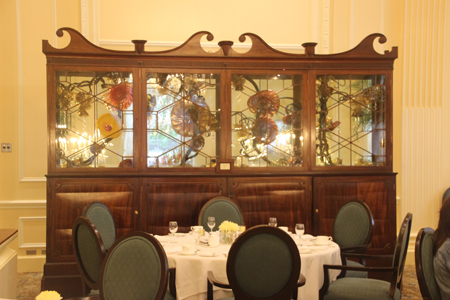 After I finished up, paid, and got my to-go box, which was put into a huge Fairmont paper bag with handles, I went out into the lobby to take more pictures. I approached the concierge desk to ask if they had any written information on the hotel. They did indeed and shared it with me. One man handed me a book commissioned by Fairmont to provide the history of the hotel. “It’s the only one we’ve got left, I think, but you’re welcome to have a seat and look through it.” 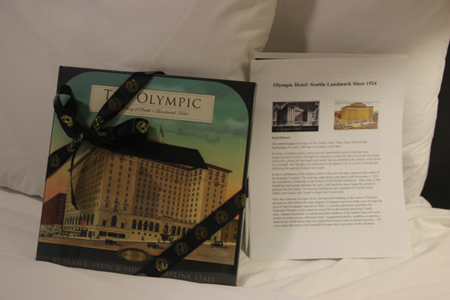 The book gives the history of the hotel… the handouts were free!

Another concierge glanced up. “We’ve got a few of those left,” he said.

“Maggie moved them. I’ll go look.” Off he went and then back he came, with this. It was $20, well worth the price.

I had a good time, was pleasantly overwhelmed by architecture and design, and managed to check the third location off my six-location to-do list. Plus, I was so buzzed on caffeine I would have run wind-sprints the rest of the day. That energy served me well at Pike Place Market.

This entry was posted in View from the Road and tagged Novella, Olympic Hotel, Seattle, tea. Bookmark the permalink.