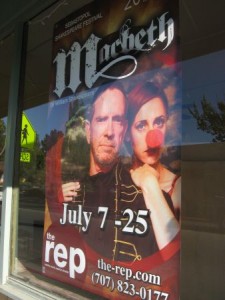 At the beginning of the Rep’s production of MacBeth, a doll-like clown with a lacy mob cap and ruffled petticoats tiptoes onto the stage, followed by a colorful ragamuffin clown.  As they watch, a traitorous Scot is executed and his body thrown at their feet.  Once King Duncan and his men leave the stage, the clowns reanimate the dead man, who becomes, with his swaying torso and perpetual sly smile, a jack-in-the-box clown.

These are the three witches.

As other characters die—this is Macbeth after all—they morph into clowns.  The clowns bring a chilly otherworldliness to a play already filled with oracles, omens, ghosts, and the hallucinations of guilty minds.

The rest of the production is traditional, which makes the inclusion of the clown witches, who also function as bit players such as the assassins, even more sinister and strange.  It is a weird choice in a weird play and it works well.

Most of the rest of the play works well also. The set seems simpler than it is, and the gaily painted timbers, alternating blue, white, red, yellow and green, make sense once you understand the Carnival of Souls subtext.  One wall is painted red, covered with mirrors in various types of old metal frames.  It’s evocative and powerful.  Most of the performances are good and some are very good, although I wish the director had spent a little more time on the interpretation of the characters.  Scott D Phillips is powerful as Macbeth but I would like to see him as Macbeth unleashed; the role was too constrained by the mannered choreography, especially in the scenes between him and Rebecca Pingree as Lady Macbeth.  Pingree is luminous, but stalks around the stage more like an interpretive dancer than like the loving, murderous woman Lady Macbeth is.  Phillips doesn’t let the role go without a fight; we see the undeniable gleam of envy on his face when he talks about Banquo—who he is going to have killed—because Banquo has a son.  Macbeth has a wife who is fearless, loyal and passionate, but they have no children, and it does seem that this is one of Macbeth’s motivations for the murders he orders.  Phillips also lets us see Macbeth’s toxic pride when he criticizes Duncan’s choice of heir; Duncan’s son Malcolm, even though as the king’s son he is the obvious choice.

I was disappointed that Lady Macbeth acts like a lap-dancer in their first scene together, running over Macbeth’s brief—so brief!—struggle with his conscience and making the regicide seem like a man who is both henpecked and sexually manipulated.  This is not fair to either of the Macbeths.  They are partners, loving monsters, accomplices in a horrid crime and an appalling betrayal of trust.  Macbeth’s act would be treason wherever he had chosen to do it; to kill the king who sleeps under your roof, under your protection, is somehow a more heinous act. To drug his attendants and then smear the dead king’s blood on their hands and faces is another kind of act all together, one Macbeth’s loyal, loving and fiendish wife is willing to do for him.

Jack Halton, as Duncan and then as a clown who speaks only in falsetto, does a fine job, and I was drawn to Banquo, played by Matthew Proschold, who comes back as a hobo clown.  The most chilling of the clowns was Sonya Smith; a warm, caring Lady MacDuff, rocking her new babe in her arms as she tries to make sense of her husband’s apparent treason, shifts into a fey, flirtatious clown swinging her dead baby as if she were a child and it a doll.  One of the best moments comes near the end of the play when MacDuff (Tim Redmond), about to leave the stage, pauses and glances back.  There is no one alive on the stage, only clowns, only ghosts.  He seems to make eye contact with the one who would have been his wife.  She smiles.  It is not the smile of a sweet and loving wife.

The dead, the clowns, are citizens of another country. They are the shadow dwellers.  Macbeth is not driven solely by ambition; but by envy and wounded pride.  His wife’s loyalty to him turns down a dark and twisted road.  Strength, courage and energy are put to vile and evil purposes. Prophecies are not what they seem to be. And at the end, what is left are the dead.

Director Jon Tracey cut the play quite a bit, another fine tradition.  I have to admit I missed, “What?  All my chicks, and their dam, in one fell swoop?” from MacDuff, but that’s a personal preference.  The shorter version keeps the action moving.  You won’t be bored.

The show runs from July 7 through July 25 at Lives Park.  Bring a jacket.

This entry was posted in Live on Our Stage, View from the Road and tagged clowns, Ives Park, Jon Tracey, Mabeth, Rebecca Pingree, Scott D Phillips, Shakespeare, The Rep. Bookmark the permalink.