Food Stamps at the Farmers’ Market: 1 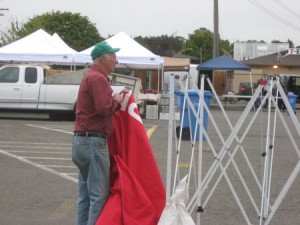 “See that guy in the red shirt, behind the chicken coops?”  Paula pointed.  “That’s Paul.  Go get him and tell him to help us put up the canopies.”

I walked across the Vets’ Building’s parking lot toward the truck with the chicken-coops-on-stilts, where three men stood drinking coffee and laughing.  The tall guy in the red shirt looked like the oldest.

I had gotten here a few minutes after seven am on this foggy Saturday, and, not seeing Paula, I sat in my car and watched the vendors set up the market.  Pick-up trucks and vans rolled carefully into their Paula-designated slots.  People piled out, or jumped off the tailgates, and pulled out tables, EZ-Up canopies and lug boxes of vegetables and fruit.  Some tilted up temporary walls; others spread tablecloths or oilcloths.  A couple of vendors with cooking booths trudged over to the building to get water or swung squat cylinders of propane into their booths.

Paul was going to help us assemble the Information booth for today’s SNAP (Food Stamp) kick-off event.  I cut him out of the herd.  “Paula told me to tell you that she needs your help.”

He scowled at me.  It wasn’t a convincing scowl.  “Do you do everything Paula tells you to do?”

As we approached our staging area, Paula slid three storage boxes out of the back.  She looked earthy, like a hill-country grandmother in a literary novel; gray hair, not silver, yanked back into a haphazard ponytail, tanned face, deeply lined, blue eyes used to scanning the horizon.  She immediately gave Paul orders.  “Here, set this red one up right here,” pointing one flip-flop and scraping a line on the pavement with her toes.

“You weren’t busy.  You were just bee-essing with your buddies,” she said.

“Paula, are you going to want to other canopy?” I said, starting to tug it across the tailgate.

“Careful, it’s heavy!  Yes, we do need that one.  It’s for Wendy.”  She pointed to show me where she wanted it set up, and I continued to drag it out of the back.

Then Paula vanished.  She did that a lot during the course of the day.  It’s a gift she has.

“The only thing wrong with an EZ-Up,” Paul said as he and I tried to pull the aluminum legs apart and get the spacing right, “is the name.”  The spidery framework stood with two legs planted on the areas Paula had marked, and the other two not quite square.  “Now we have to put on the canopy,” he said.  We pulled the red plastic cap down over the tops of the poles.  Grommets had to be matched to screw heads about the size of nickels.  Once the fabric was in place, I had to screw the head back on.  Paul showed me how to use the head of my house key as a screwdriver.  Now the red cover with INFORMATION printed in white letters was firmly attached, but the whole canopy stood about four feet high and the truss in the center nearly touched the ground.  Paul clambered down underneath, crouched on the balls of his feet and pushed upward.  In theory, the truss would rise and the canopy blossom open.

“I’m in trouble,” Paul said, wobbling back and forth.  I leaned in and reached out for him, but he toppled backward, catching himself on one hand as if he were crab-walking, then letting himself go into a controlled fall and rolling to one side.

We decided to telescope up the legs a couple of notches, and then the truss rose almost automatically and the thing unfurled as gracefully as a sensor array on Star Trek.

The second canopy, the older clunky one that I had pulled off the tailgate, took us half as long.

“What do you sell?”  I said, as the button on the last leg of the canopy popped into place.

“Redwood boxes,” he said. So the guy who had helped up set up to announce the acceptance of Food Stamps at the market didn’t even sell an eligible item.I promised to stop by his booth.

The Doctor Chef Is In 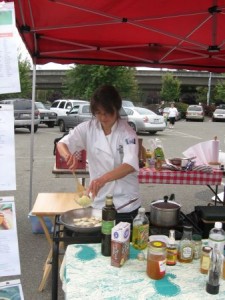 I knew Wendy Kohatsu, MD, was a woman after my own heart when I saw her chopping an entire head of garlic for her cooking demonstration.  Dr. Kohatsu is faculty at the residency program at the Santa Rosa Clinic, and a chef.  She loves to cook and prefers low-fat, healthy and probably vegetarian meals. The theme she and her residents had chosen for market day was Food as Medicine.

“Is there anything you need?” I said.  The folks from VOICES had shown up, eight of them.  They were staffing the kids’ craft booth, but certainly one or two of them could act a gophers, and I knew Wendy wanted to reconnoiter the market to see what produce would be good in her creations.

“Yes.  I’m supposed to have sixty dollars from Paula for food, and my minions are supposed to be here, but I don’t see them,” she said.

“Isn’t it nice to have minions?”  I looked over my shoulder as I spoke and saw two young doctors from the residency program strolling toward us, name-tagged and clutching coffee cups.  “ I think they’ve arrived.  I’ll go find your cash.”

This took me on a round of the market, because Paula was about eight different places, and none of them were where I was.  It’s that disappearing thing.  When I found her, she had about thirty-five dollars in cash and sent me back to the Information Booth. I walked the length of the market again to the red canopy and found Nancy, who had changed into her pea pod costume.  Nancy was not only the heart and soul of this project, in my opinion, she was also the quintessential good sport.  Plus, she’s like a Size Two and looks good in a pea pod costume.

Nancy was surprised to be told that she had the money bag, but soon we found it. I gave Dr. Kohatsu her funds.  The first thing she cooked, just to get the smell of olive oil and sautéed garlic wafting through the market, was a stir fry of 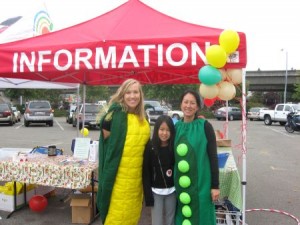 From the early 1970s when the Food Stamp program was created until somewhere in the mid-to-late 90s, “food stamps” were actually paper coupons.  There were a lot of downsides to the coupons; they let everyone behind you in the checkout line know you were using them (and many people seemed to feel that gave them the right to comment on what was in your cart); they were easily stolen, just like cash, and just like cash, not easily replaced; they were fragile and could be destroyed in a fire or a washing machine.  States, counties and other jurisdictions had to transport and store the coupons as if they were cash, with armored vehicles and vaults, a sizeable expense. Food Stamp coupons were part of a criminal black market because some people would trade them, at a discount, for cash.

There was one good thing about them; since they were just like cash, people had no trouble using them at farmers’ markets.

In the 90s, everyone decided that electronic benefits were the way to go.  Electronic benefits were more secure; and there was less potential for fraud and black-marketeering, and less stigma, at least in theory, at the checkout line.  There was only one teeny-tiny drawback; most farmers at certified farmers’ markets did not carry Point of Sale devices, nor could most of them afford the $800 to purchase one.  Farmers’ markets were cash-and-carry, and the 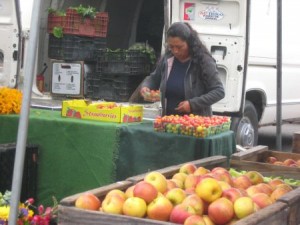 new Electronic Benefit Transfer (EBT) was edged out of the markets.

Surprisingly, many low-income people who use food stamps don’t eat a lot of fresh fruits and veggies and they don’t come to farmers’ markets.  They buy food that’s cheap and filling because it’s what they can afford, or what is available in their neighborhood.  In my county, one of the most agriculturally diverse in California if not the United States, there are neighborhoods categorized as “food deserts,” where families cannot buy fresh vegetables or fruit.  The USDA now lets certified markets become EBT vendors and accept food stamps, in an attempt to connect people with healthy food.

There is one machine for the whole market, and the business entity of the market is the vendor. If I participate in the Food Stamp program, I go to the red Information booth, I swipe my card and say, “I want to spend twenty dollars.” You hand me twenty one-dollar wooden tokens, unique to this market.  Let’s hope I spend all twenty, and leave satisfied.  Maybe I don’t.  I come back at the end of the day with five tokens left over.  I can ask you to load $5 worth of benefits back onto my EBT card.  What you really hope I’ll do is hang onto the tokens, and come again next week. 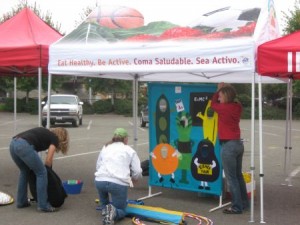 A lot of time and energy had gone into this “launch” event at the Santa Rosa market.  There were fliers, press releases, radio spots, articles in the local papers.  We connected with churches, clinics and Laundromats. A lot of energy, for one day, for a population that is disenfranchised, lacks transportation and is often passive.  All along I had been saying, “It’s okay if we only get six families.  If we have more volunteers than we have food stamps clients, that’s not failure.”

Paula brought $400 worth of market tokens. We thought that was optimistic.

We had thirty-seven swipe-card transactions.  At ten-thirty, Paula was frantically running from booth to booth, writing IOUs to the farmers and collecting back the tokens, because we were running short.  At the end of the day we had converted $618 to market tokens.

People stopped to watch Wendy cook.  Children played the games and went on the treasure hunt.  Kids would drag their parents to the booths that had apples, berries and fresh peaches; fruit was a very big seller that day.

It was a good day.

Now, how do we get them to come back?

This entry was posted in Around Town, View from the Road and tagged Dr Kohatsu, EBT, farmers market, food stamps, healthy food, poverty, setting up, Wendy Kohatsu. Bookmark the permalink.

One Response to Food Stamps at the Farmers’ Market: 1