Food Stamps at the Farmers’ Market: 2 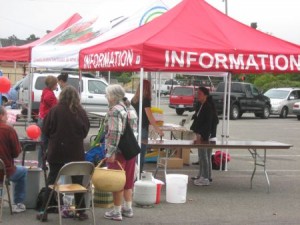 When the big white letters on your canopy say “Information,” you get questions that are broader than just how to swipe your EBT card and get market tokens.  I was being a “go-fer” for most of Saturday, but I ended up at the booth a few times.  Here are the questions I got:

“How do I get to the Gravenstein Apple Fair?”

“Which way to the booth that has tamales?”

Fortunately, I knew all these answers.

We had 8 volunteers from an agency called VOICES (Voicing Our Independent Choices for Emancipation Support).  This program was started by a group of young people coming out of foster care, in Napa County.  They were worried about how they were going to make it with no support network, so they formed their own.  A year ago VOICES opened a chapter in our county. These young folks staffed the crafts booth, took some market surveys that Paula wanted, and helped out with the ocassional random task.

At work, we had been wanting our local paper to carry a story on VOICES for a long time, but we had no luck.  The agency had been profiled in the San Francisco Chronicle, but not our local paper.  About eleven o’clock, I was standing with the reporter from the local, making small talk while I waited for Nancy to find Paula and bring her here, so the reporter could ask her a couple of questions.  I was trying to oh-so-casually work VOICES into the conversation.  I had managed to work it into the e-mail I’d sent inviting him.  Finally I just said, “We also have kids from VOICES here.” (I’m old and everyone under 30 is a kid to me.)  “It would be nice if you had a chance to—” I turned as I spoke, scanning the crowd for Paula, and saw Felix, one of the VOICES folks, heading straight toward us.  I said, “Oh, look, here’s Felix from VOICES now.”

Felix was looking for Paula, but he started talking to Martin, the reporter, with no hesitancy at all.  I was impressed, maybe even stunned.  I’m always second-guessing myself, worrying that I’ve said the wrong thing, sure I sound like a blithering idiot, and Felix was confident and clear, his voice full of energy, no “Ums,” or “Uhs.”  Martin was leaning forward, scratching notes, interrupting to ask questions, engaged.

Paula and Nancy came up.  Martin gave Felix his card and said, “Call me next week.  You want to catch me before I go on vacation.”  He turned away to talk to Paula.

This entry was posted in View from the Road and tagged farmers' markets, Information Booth, Local News, VOICES. Bookmark the permalink.

One Response to Food Stamps at the Farmers’ Market: 2