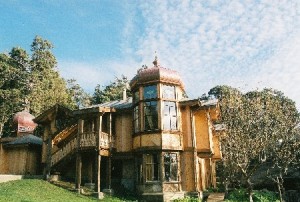 When I packed to go to St Orres, an inn in Gualala, after Christmas, I took three of my Christmas books—Divisadero, which I started Christmas day, Bone by Bone, and Bill Bryson’s Shakespeare; the World as Stage.  I thought the Sig-O would pack one or two of his Christmas books as well, but he surprised me and brought along a Marcia Muller mystery, The Ever-Running Man.

The Sig-O works in Gualala for most of the week.  To drive me up Friday, drive home Sunday, get up at 4:30 Monday morning and drive up again seemed silly.  We went in separate vehicles.

On the Sonoma coast a few miles past the top of Meyer’s Grade, a ranch straddles Highway One.  This is free range country.  There are often cows in the road and this sunny Friday-after-Christmas was no different.  The drivers were different, apparently.  A car near the front of the line kept honking at the cows as they ambled across, or along, or up the middle of, the road.

In the car in front of me, an Australian shepherd bounded from side to side in the back seat, tail sweeping manically, hanging her head out the window to bark with authority at the bovines, who swiveled their ears and stared at her.  I sympathized with her.  Here were animals who needed herding, and she was just the dog for the job!

Before we reached the cow-fording section, I had let the Sig-O pass me.  He is very familiar with that road, and the sight of his large pickup truck looming in a rearview  often motivates other drivers to use the turnouts.  I assumed that he would have reached St Orres, have gotten the key, checked us in and be in the bar sipping an Old Rasputin Stout when I arrived.  To my surprise, he was just getting out of the truck.  He had beaten me by only three minutes.

Saturday morning, just as it started to rain, we went to the Four-eyed Frog Bookstore.  Joel and Jeremy, two brothers, opened it a few years ago, after they retired from other careers. Joel is the mayor of Gualala and has re-invigorated the business district, especially Cypress Village. The Sig-O built the building that houses the Frog, so that’s how they got to know each other.

The Frog is in most respects an old-fashioned independent bookstore, a social center for the town and the southern Mendocino coast.  Joel schedules readings, book-signings, musical and artistic performances there.  Over 200 hundred people attended their midnight release party for the final Harry Potter novel.

The Sig-O bought the latest Spenser novel, Rough Weather.  I got the Hanged Man, by David Skibbins.  Skibbins lives in Sea Ranch at least part time.  His character, Warren Ritter, is a leftover 60s radical with bi-polar disorder who reads tarot cards on Telegraph Avenue for a living, and solves murders in his spare time.

Saturday it rained.  The Sig-O built a crackling fire.  I sat in the window seat, drinking Benedictine-and-coffee, and finished Divisadero, pausing once in a while to watch the wild turkeys out the window. 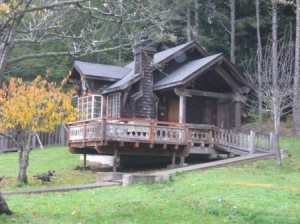 Friday afternoon, when we arrived, it had not been raining.  Once we hauled our bags into our cabin, Sequoia, and settled in, I pulled out the bag of COB—corn, oats and barley—from my trunk.  The turkeys were nowhere on our stretch of meadow, but across the driveway six or seven of them pecked at the wet grass.  I walked down to the driveway and threw a handful of grain in their direction.  Then I turned and walked back up to the cabin, scattering grain.  I didn’t bother to look behind me as I walked.

The Sig-O said he felt like a character in a horror movie.  He wanted to lean out the window and shout, “They’re gaining on you!  Run.  Ru-u-un!”

In the dining room Saturday night, I watched a couple at a table near us.  They each ordered an appetizer, a different one.  Each ate half, then they switched plates.  She ordered the chilled, caramelized pumpkin soup, he the potato-fennel.  Halfway through, they exchanged bowls.  The Sig-O and I always share bites, but this couple had true dedication.

Later, during our entrees, the Sig-O asked our bus-person for another beer.  She said, “Certainly, I’ll tell your server.”  Then—I guess fearing we would think she was lazy or something—she blurted, “I can’t get it myself because of my age, but I’ll tell her.”

A few seconds later the Sig-O said, “I just figured something out.”

“We’ve been coming to St Orres since before our bus-girl was born.”

When I finished Divisadero, I turned it over to look at the blurbs on the back.  There were two, one from the author of The Namesake and one from the San Francisco Chronicle, and a picture of Michael Ondaatje looking pastoral and silver-haired.  I read the blurbs, and I thought, “Aha, you guys don’t know what the book’s about either.”

Eric Black, carpenter and co-owner of St Orres, showed us a drawing he’d done of “the tea house.”  “It’s just a sketch,” he said.  “Not to scale or anything; just a doodle.”  Ah, yes, a doodle; a tiny redwood castle with two dormer windows and two swelling copper-robed onion spires with stained glass collars; like the domes on the lodge and the new office space behind the lodge, like the tiny domes on the Pine Haven cabin or the ones of the fairy-castle Chanterelle.  The tea-house will sit next to the lodge where a weathered whitewashed storage building sits now.

Eric has been planning/fantasizing about the tea house for six years, but I’d never seen a sketch before.  Maybe he’s finally getting serious.