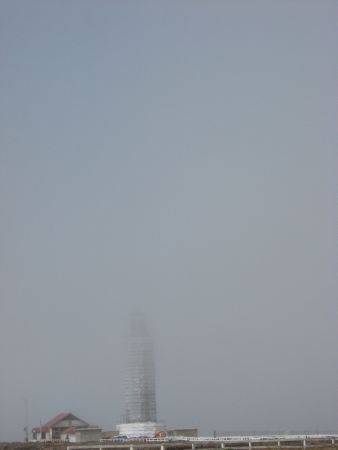 The only part of the coast veiled in fog Saturday afternoon was the spit of land the Point Arena lighthouse occupies.  The lighthouse is currently swathed in some kind of translucent fog-colored plastic because they’re doing some kind reconstruction.  It’s draped in a huge translucent shower curtain, camouflaged.

They have removed the Fresnel (“freh-nell”) lens from the tower and it’s now on display in the museum.  The thing is gorgeous and amazing; pale green prisms, looking like something underwater, the powerful light bulb inside throwing 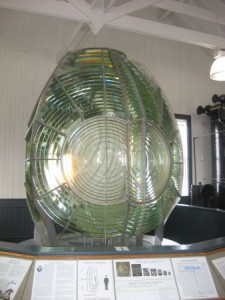 rainbows across the arched glass.

As everyone at Point Arena is quick to let you know, Point Arena Lighthouse is the tallest lighthouse that is open to the public.  Pigeon Point is the same height, but no visitors are allowed.

Before we went up to the top, our on-the-ground docent Keith showed us the rotating stand the Fresnel lens used to sit on, in the old days.  The stand rested on 600-pound bed of mercury, a virtually frictionless platform.  When lighthouses first went to the coded flashing, before electricity, the lens rotated on this pillow of mercury pulled by a counter-weight, lazy-susan style, while the weight on the end of a chain dropped incrementally down the length of the tower.  Like your grandmother’s cuckoo clock, only bigger.  The lighthouse-keeper had to rewind the counter-weight about every hour.  Of course, there were four lighthouse-keepers at that time.  Then it became electric.  Now they have a beacon mounted on the side of the tower.  It’s about the size of a small microwave oven.  The beam only extends about two miles farther out than the Fresnel did (twenty miles to the Fresnel’s eighteen).  Ah, technology. 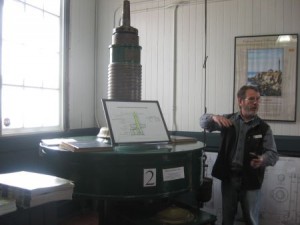 Point Arena’s flash-signature (and I’m sure they aren’t called that) is a double flash every six seconds.

Keith saw us to the plywood-covered corridor leading into the tower, and we climbed.  And climbed.  My calves had a few comments to make, none of them complimentary.  I waited to go last, and fell even further behind because I wanted to take some pictures of the spiral.  That’s my story, and I will stick to it.  The others weren’t that much further ahead of me.  Jason met us at the top.  He invited us up into the lantern room, reached by an even narrower, steeper staircase that functioned more like a ladder.  I climbed up into a dome walled in glass. 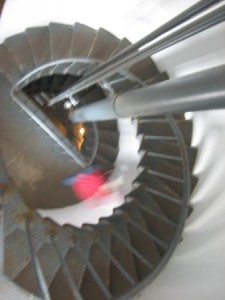 “Here’s what you could be seeing,” Jason said, gesturing to the fog.  He pointed to where the Garcia River ran, about a mile and a half away, and north, to where the San Andreas Fault goes into the ocean.  He talked about local wildlife, the odds of seeing a whale (good, he thought); the cormorants, the seals.  Then we want back down the ladder and he let us go out onto the walkway.  The cold wind was shredding the fog and I could catch glimpses of the Devil’s Punchbowl.  It is a bowl no longer.  Erosion and some heavy storms in 2006 opened up one whole side, so instead of being a circle of rock with water in the middle, it is now a crescent.

“We’re on the wrong side of the San Andreas,” Jason said.  “So if there’s a big one, the first thing sliding into the ocean is us.”

I imagined working here in 1907, winding the counterweight, trimming the wicks on the kerosene lanterns, periodically cleaning the glass of the big lens; tending the garden, hiking to the Garcia River and back for water (they may have had a well, but Jason wasn’t sure); hunting and fishing for protein.  It sounds like hard work, and it sounds. . . useful.

When I started back along the narrow road, the fog vanished about a quarter mile from the park, and I was surrounded by blue sky and sparkling ocean.

This entry was posted in View from the Road and tagged Fresnel Lens, photography, Point Arena, Point Arena Lighthouse. Bookmark the permalink.