Heidi Endemann: “Painting is not Dead!” 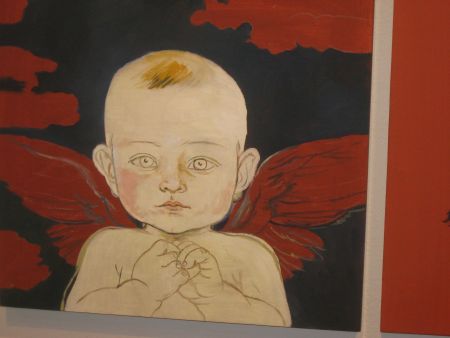 Heidi Endemann is an artist of great technical ability and a powerful vision.  Her work connects with us on several levels.

Endemann’s years in the advertizing industry planning honed her picture-making ability.  Her work is realistic; nothing is suggested, hinted or evoked.  Instead each necessary detail is in place; whether it’s depicting a chubby-cheeked toddler, a tiger, a death’s head or a famous cartoon character.  Her colors are vivid and look deliberately pretty; pretty and glossy, in the sense of a glossy magazine.  She uses this deliberate prettiness to tell a story, and story you walk away from intrigued, thoughtful and emotionally moved. 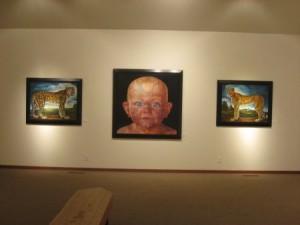 In the lobby of the Gualala Arts Center, Endemann has several large pieces from the series of hers I like the best.  Maybe I just like it because I’m a sap and it seems to be the most hopeful, somehow, of her work.  The series depicts a chimpanzee or some other, perhaps idealized, primate; and a blond, cherubic human baby.  In one picture, the chimpanzee is handing the baby a toy—the blue globe of the world.  In another, hung on the landing above the stairs, the ape stands, arms upraised, and the baby, riding on her shoulders, has his arms upraised as well.  Both are grinning, and a golden spinning world dangles above them like a Christmas tree ornament.

Also in the lobby is a powerful political statement about global warming called “Homo Sapiens,” and an installation titled “Irreplaceable.”  “Irreplaceable” is made up of several panels of butterflies, done in glorious color, each with its Latin name printed in script underneath it.  At first glance the piece seems bright and pretty, but something is not right.  The wings of some of the insects seem tattered, except they are not tattered, they are burning.  As you look closer you see a grinning deaths’ head painted into the body of each butterfly. Each butterfly’s wings are being singed away. 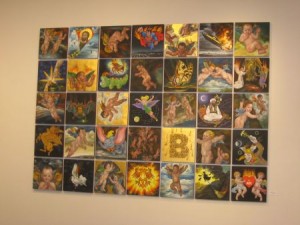 And then there are the babies, the healthy sturdy boys with their innocent faces and their skin marked, like a birthmark or tattoos, with various logos and trademarks.  One, with the chimpanzee, is called “Nascar Baby.”  The others tend to have only babies in the frame; as if  claims have been staked before we’re even born by the multi-national conglomerates who make their profits by turning us from citizens into consumers.  Even the natural world, represented by the collared leopard and cheetah, has not escaped this fate.

I’d say Heidi Endemann has a definite point of view.

The most elaborate installation in the show is “The Icarus Project; I and II.”  Again, rectangular panels are hung together, looking like a quilt, almost, on opposite walls of the gallery.  The theme in each panel is wings on fire.  Icarus II, backgrounded in shades of rust and red, looks almost unfinished, while 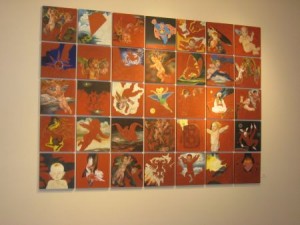 Icarus I has those bright children’s-book colors.  At first glance, the panels look identical, except for the colors, but they are not.  Endemann is playing with the theme here.  I cannot begin to articulate what she is telling us.  Is it about hubris, about balance?  About innocence and faith?  Just variations of “wings on fire?”  It’s more than that—so much more.

The show hangs until October 3, at the Gualala Center for the Arts.  I have not begun to do it justice here.  Go see it.