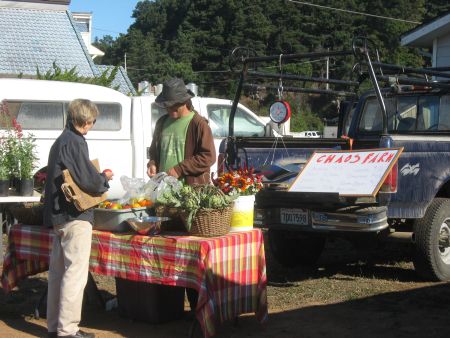 For years philosophers, political opportunists, mathematicians and scientists have wondered what we would reap from chaos.  Based on the photograph, the answer is definitive; tomatoes, artichokes and flowers.

The seven or eight vendors present had zuccini, squash, tomatoes, live plants, berries and some apples.  One woman was selling honey.  I was surprised by the tomatoes, but I guess if you live up on the ridge, above the fog line, you probably have enough sun to grow them.

In the center of the loose circle of vendors sat circular plastic table with two folding chairs, where you could sit and eat your apple and drink a cup of coffee, except that you had to have brought the coffee with you.

One vendor had a number of berries, including blackberries, and rows of paper cups two-thirds filled with huckleberries.  I’d never heard of a huckleberry farm so I asked her if she grew them.

Huckleberries, in California at least, seem to grow in forest areas, damp areas.  I remember picking them when we could go camping when I was a kid.  One time when we camped in Hende Woods, my mother and I went out determined to pick a whole bunch.  I think there was a vague plan for a cobbler when we got home.  I ate about a third of the berries while we were picking them, and as I recall, we polished off the rest right out of the bowl while we sat around the campfire that night.  They are like tiny, sweet blueberries, with a slightly sharper flavor.

The woman next to me said, “Picked them.  That’s very labor intensive.”

The vendor nodded.  “And very hand-stainy.”

This entry was posted in View from the Road and tagged farmers' markets, Gualala, huckleberries. Bookmark the permalink.