Christmas in the Redwoods 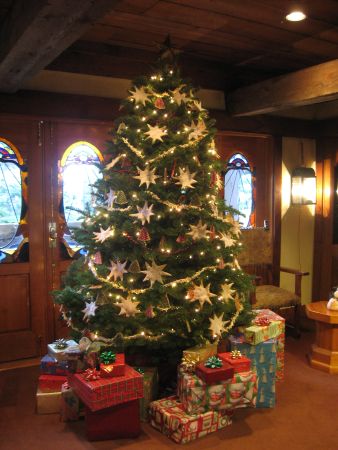 The Books we Got for Christmas

The Sig-O and I are on a John Connolly binge right now so the Irish writer’s thrillers figured prominently in our stash this year.  We got The Unquiet, Every Dead Thing and The Reapers.  After having read a few of the Charlie Parker thrillers, it was nice to finally get Every Dead Thing and see Parker’s genesis.

The Sig-O also got Moonlight Mile by Dennis Lehane, and a non-fiction book about an incident during the American revolution called Unlikely Allies. A Simon R Green “Secret Histories” book, The Spy Who Haunted Me, also showed up in his Christmas stocking.

I forgot to put the book I really wanted, Kraken, by China Meiville, on my list, so I don’t have it, but I plan to be ordering it soon.

I got a memoir called The Philosopher and the Wolf, by Mark Rowland.  It was not, strictly speaking, a Christmas gift since I got a copy for myself after picking one up for a friend.

It’s the book I read Christmas day, sitting on the couch in front of our cabin’s glass doors, watching the rain pelt the deck, listening to it patter on the skylights, while I soaked up the heat from the radiating Franklin stove.  To sum up the book in one sentence, I liked the wolf better than the philosopher. 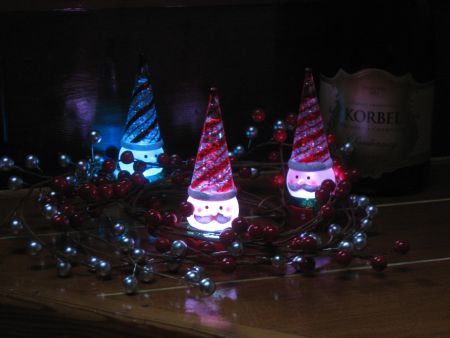 St Orre’s offered a fixed price menu for dinner, for $75. This was a five course meal (starters and dessert included) and I think the price worked out to slightly less than what that would cost normally.  They only offered one appetizer and only six of their eleven desserts.  The appetizer was crab cake and scallops with a red pepper aioli, which would have been a problem for me because I’m allergic to crab.  I’m not allergic to scallops.  I also know I could have asked for another appetizer and they would have whipped up one for me, because it’s that kind of place, but it wasn’t worth the bother.  I just traded the Sig-O a crab cake for a couple of his tender, silky, melt in your mouth scallops, which had been dusted in seasoned flour and seared, and stood up just fine to the spicy aioli.  The Sig-O pronounced the crab cakes, stuffed with crab meat, red pepper and green onion ( no bread filler except for the crust) excellent.

As always we had our choice of a warm or chilled soup.  Except for gazpaucho and a couple of soups Rosemary makes in the summer, the chilled soups are invariably sweet.  Since the Sig-O chose the warm butternut squash soup I picked the chilled cranberry-orange.  Our server told us it had a bit of jalapeno.  It was good.  I had trouble distinguishing any orange.  I got sweetness, cranberry and the heat of the jalapeno at the back of the mouth as an aftertaste.  The butternut squash soup was warm, velvety, with the buttery squash taste and a little bit of its sweetness; just enough salt and pepper, not many other spices.

The salad was baked pear, gorgonzola and endive, with candied nuts and a pear vinaigrette.  I fell in love with this salad.  Pears, when they are ripe, are an amazing fruit, and the different types of crunch—the endive versus the candied nuts, coupled with the creaminess of the cheese and the granularity of the pear, made for a balanced quartet of textures and flavors.

His entrée was the rack of lamb, which swept to our table in a cloud of roasted garlic and rosemary.  I had the mushroom ravioli.  His had a sprig of fresh rosemary riding atop the mashed potatoes (themselves piped into the shell of a baked red rose potato) like an herbal flag.  Mine had a big sprig of fresh basil, as well as the streamers of fresh basil cooked into it.  The ravioli came in a light alfredo sauce with grape tomatoes, oyster tree mushrooms and porcinis.  Freshly grated parmesan added saltiness and nuttiness to this very rich dish. Baby carrots had nearly drowned in the alfredo sauce but didn’t lose their texture or their sweetness.

The Sig-O had St Orre’s signature dessert, the chocolate decadence, even though we both agree that their crème caramel has surpassed it. (He had crème caramel the night before.)  The decadence is frosted with whipped cream and served on a bed of raspberry puree, tangy enough to cut the density of the dark chocolate.  I had the huckleberry bread pudding.  The huckleberries were locally foraged, delicious, but the star of this dish was the caramel sauce.  It was dark and rich; darker than I’ve ever been able to get mine to come out, yet there wasn’t an overpowering molasses flavor.  I don’t know how they did it.  It’s a mystery.

After we finished we hung out in the bar for a while with Rosemary, the executive chef and co-owner, and her two new eensey dogs, Honeybunch and Roxie Rose; two teacup schnauzers. She says they weigh five pounds each.  I don’t believe it.  They’re so tiny they look like imaginary animals. 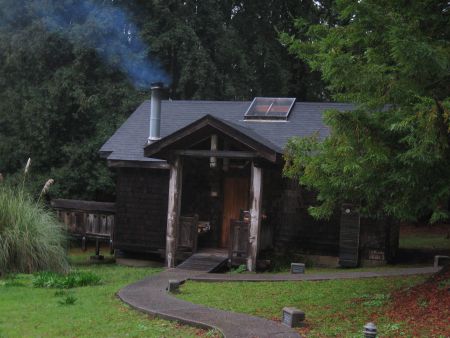 That was Christmas.  Good food, good conversation and lots of books.  Redwood trees, the ocean, and rain.  Does it get any better?  Call me biased, but I think not.

One Response to Christmas in the Redwoods