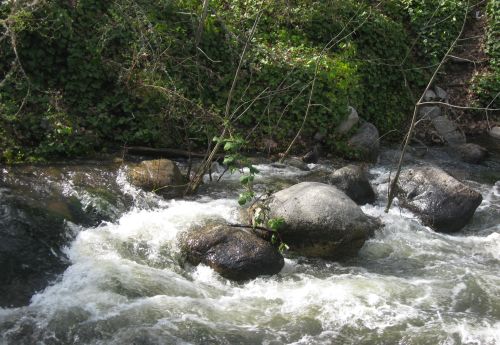 I was torn.  I had a ticket for the Saturday matinee of To Kill a Mockingbird, but after a long walk Saturday morning I decided I had to do the cultural thing and see what was available for Saturday night, instead of staying in my hotel room and watching the season premiere of Doctor Who on BBC America.  Yes, I really am that shallow.

So, after walking in Lithia Park, I went to the Box Office, but Julius Caesar was sold out, and I wasn’t drawn to August; Osage County. So, I get the best of both; I saw Mockingbird, and got to feel virtuous about watching the Doctor try to help President Nixon with an infestation of scary aliens.

On the trip up, I left my Shakespeare umbrella in my room in Eugene.  I didn’t get the umbrella here, but at a bookstore back home.  I used a gift certificate that a group at work had given me for a birthday.  It was squarish in shape, not circular, and had Shakespeare on it in green and melon-orange.  I really liked that umbrella.  I called the hotel and we agreed that I would pick it up on Friday when I came back down, but I took the wrong freeway exit.  It had the same number as the northbound exit to get to the hotel, but. . . it’s the getting lost thing. After driving around in a housing tract for twenty minutes, I mentally shrugged and got back on the road.

Bloomsbury Books had the same umbrella, so I got another one.  It doesn’t have the sentimental value, but it’s part of the vacation now. Perhaps it will develop a store of memories, and the old umbrella will move on and have new adventures, not unlike Doctor Who and his rotating human companions.