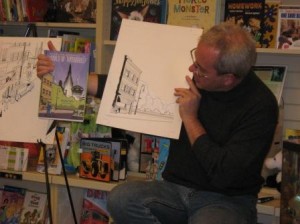 The coolest thing about Brian Fies’s book-signing at the Four Eyed Frog was when Joel Crockett introduced him to Nick. Nick is a high school senior. He and his mom are Gualala locals. The Sig-O knows her. Like most locals, she works about three jobs in town. She does landscaping and janitorial service for Cypress Village, works another job somewhere and delivers firewood to folks in Sea Ranch. She is medium height with a slender brownish-blond braid that reaches nearly to her knees. Brown-haired Nick is tall enough to look down on the top of his mother’s head. He draws a cartoon strip for his school paper. They hadn’t known about the book event, had just come in to pick something up. Brian talked to him about drawing and showed him some of the sketches from Whatever Happened to the World of Tomorrow? Nick couldn’t stay for the talk, but he got the first autographed book of the afternoon.
*
The second-coolest thing was the couple at the back of the store. They also came in to pick up something and did not plan to stay for the event. When Brian started speaking they drifted to the other end of the store, by the bay window and stood quietly talking. The Sig-O and I were standing near the back. I could hear them. The sentences of their conversation grew shorter, the silences grew longer. They moved up so they were standing near the door, just behind us. A few minutes later I heard the woman say, “Are you ready to go?” He said, “In a minute.” I knew they weren’t going to go in a minute. They were hooked. In about a minute, he had walked up to the counter, and Jeremy had come out from behind it to get a book off the table. I think that guy was the second one to get his book autographed.

*
And the other second-coolest thing was Brian’s talk. He is low-key and funny, and never seemed nervous. He didn’t even seem nervous when he first got there. He may have been, but he hid it well. He talked about his personal love of science and imagination, and how those informed the structure of the book. Brian loves history and that showed in his talk. The group got the most animated when he started talking about Walt Disney. Everyone in his audience was old enough to remember when television had three channels, and on Sunday night you watched the World of Disney. If Nick had been able to stay, he might have thought we were joking. For many of us, Disney shaped our dreams of the future. Not just for us, as Brian pointed out, but for NASA as well. 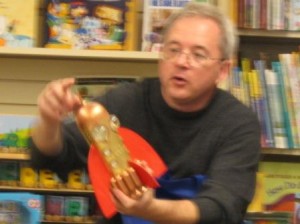 At Karen’s suggestion, Brian brought not only some preliminary sketches but some props; a model of a 1939 car that he used to draw the cars in a couple of the chapters (and the book cover) and a wonderful home-made rocket. Seriously, when he gets into the merchandizing end of things, those puppies will sell. Look on page 50 of the book and you’ll see the rocket. He went into some detail about the design of the book, from the different weights and types of papers in the pages (“Oh,” the art people said, when Brian’s editor finally brought in an old comic to show them what he was going for, “You want crappy paper!”) to some of the details of the die-cut dust jacket.

One audience member, Steve, is the editor of the Independent Coast Observer, the local weekly. He brought a book with him, a red-covered hardback from 1942 which predicted the breakthroughs of the next 50 years. He said it predicted the “slump”—by that I think he meant the recession—only it got the timing wrong, forecasting a post-WWII slump. There was discussion among the group about what we got right and what we got wrong, which is part of Brian’s point.

The group was small. This is Gualala, and they were competing with a live concert at the Gualala Arts Center and a homecoming football game. Even so, it was great fun. I brought two copies (yes! Two more Christmas presents down!) and a new Michael Connolly since the Sig-O’s birthday is this week. Hanging out with the Sig-O, listening to a writer talk about writing, and buying books–if there had been chocolate, it would have been perfect. Oh, wait. There was chocolate! It was perfect!

This entry was posted in View from the Road and tagged Brian Fies, Four Eyed Frog Bookstore, Graphic Novels, Gualala, History, science, Whatever Happened to the World of Tomorrow. Bookmark the permalink.