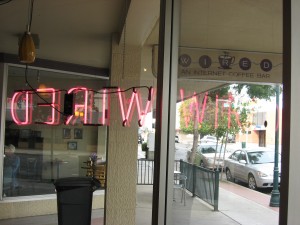 If there’s a choice between a local coffee place and a Starbucks, I will usually go the local place. I will even search out a local place before I go to Starbucks unless—rationalization alert!—I’m in the state of Washington where Starbuck’s got its start. (Or I’m starving. That’s another story). Seeing the Starbuck’s about one block up from the movie palace, I went looking for a more local place. I found one three or four blocks away, called the Wired Internet Café. In this world of wireless everything, this seemed charmingly retro. The coffee shop lives in space that looks like it was formerly retail—two large glass windows on each side of an inset door– and I could picture mannequins in clothes from the 1960’s, maybe a Mode-O’-Day or a Sprouse-Reitz. A young latina and another younger woman pulled a wheeled trash can up toward the door as I approached. The latina was talking, giving instructions to the other employee. I was about twelve steps, at least, behind them, but she saw me and held it open for me, smiling. I liked the initiative.

At a round table on the right side of the door sat six or seven men, gray-haired, with flannel shirts, some with billed caps, hands curled around cups. Their demeanor screamed “Regulars!” I imagined them meeting every there every Monday. Maybe every day.

The latina was directing the other employees, acknowledging a delivery that had just come in and sending it to the back, and making my coffee drink at the same time. I looked around for the tip jar and couldn’t find one, so I asked her about it. “We’re non-profit so we can’t display a tip jar,” she said precisely, graciously accepting the dollar bill I handed her as a tip. I asked what the program was, that they were non-profit.

This was part of Merced’s Regional Occupational Program—ROP. The shop works with young people, helping them learn work skills so that they can become self-sufficient. It isn’t just the quasi-technical skills like how to run an espresso machine, either, but the intangibles like how to show up on time, how to take direction, how to get along with other people.

As I was drinking my coffee drink at a table next to the round of PCs available for internet use, I heard her giving directions. Apparently, with the mid-week Veteran’s Day holiday, some routines were thrown off, and she explained that to her workers in a way that was patient and respectful, even when she was on her third time. They have the right person for the job there.

The coffee was good, not great. Maybe they should look for another name, since Wired is almost as dated as Sprouse-Reitz. The ambience needs a little bit of work, but the staff are great, and I’m glad I went in.

This entry was posted in View from the Road and tagged coffee, Merced, ROP, Wired Cafe. Bookmark the permalink.