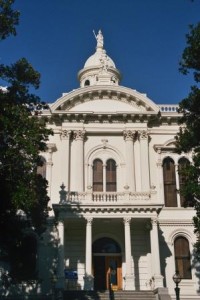 Tom Dougherty, my docent at the Merced Courthouse Museum, had a toothbrush mustache the color of a chestnut and walked like he had a stiff knee. When I came up the steps he immediately put down his novel—a techno-thriller? Clive Cussler maybe?—and asked if I wanted a tour.

It was a tiny tour group, just me. He took me through the first floor. The courthouse was built in 1875, designed by Albert Bennett, one of the designers of the California Capital. Downstairs it looks like oak. In the upstairs municipal courtroom, he told me, it looks like mahogany. In fact, the entire building is built out of redwood, which was a cheap and plentiful wood at the time. 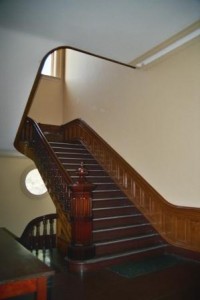 There is still one county operation on the courthouse, an office of County Parks. The rest is devoted to exhibits, some fixed and some that rotate. He showed me the two elaborate safes that were used in the county treasury, that even back in the 1920s were set electrically and had rows of spare batteries in case of a power failure. In one large room downstairs they have an old fire engine, the horse-drawn kind, donated from a muster group, and lots of artifacts from the turn of the twentieth century.

Tom grew up in the Merced area. I asked him how he felt about the new UC campus, thinking he’d be happy since it was bringing in jobs and so on. Not so much. He feels that the academic types look down on the townfolk. “It’s like, ‘oh, you’re white, you must be poorly educated and vote Republican,’” he said. “My wife and I both finished college and our children are getting advanced degrees.” (I noted that he didn’t deny the Republican thing).

Upstairs, he showed me the beautiful and imposing superior courtroom, with its large rectangular skylight and a decorative gold leaf frieze. The acoustics in the room are amazing. It’s like a tiny concert hall. He says locals who are married by the County Clerk sometimes get permission to have the ceremony in there. 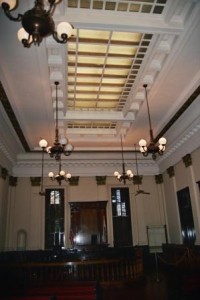 < Having only fit one foot into my mouth with the UC Merced question, I decided to go for a double. “Oh, look, grapes,” I said, commenting on the gold leaf work. Ahem, said Tom. A-hem-hem-hem. Where was I from, Napa? More grapes are, or were, grown in the valley than anyplace north. “Oh, right. Raisins. I forgot.” “Raisins,” he said, looking at me somewhat sternly, “and wine grapes.” “Oh, right! Ernest and Julio Gallo!”

So at least he didn’t have to kill me and hide by body behind the judge’s bench.

The most common grape grown in the valley was the Thompson seedless, for its versatility. It can be a wine grape, a table grape, or dried into raisins.

*
He said the three statues of Justice that perch on the domed roof were controversial in their day. Bennett believed strongly that justice should not be blind.

*
Upstairs, the rooms are devoted to various themes and periods. There is a complete blacksmith shop recreated, and a room with Chinese artifacts to commemorate Merced’s Chinatown. One room is dedicated to “mercantile,” including a beautifully wrapped box from Gottschalk’s, circa 1953. Gottschalk’s got its start in Merced.

Tom said, “Remember how, instead of putting your purchase in a bag, they’d box it and wrap it up in paper and string?”

*
The next day I went out to Lake Yosemite, the town’s reservoir. Two county employees were working on the spillway. I asked if it was all right to walk across it and they said they thought it was, since they saw people doing it all the time. (The sign said no walkers between sunset and sunrise). I stood, fiddling with my camera, and the younger of the two said politely, “Is everything all right?”

“Yes, I’m changing the film in my camera.” After a moment, “You know about film, right?”

“Yeah, I think I remember my dad talking about it.”

I said, “Fine, just throw me under the bus.”

This entry was posted in View from the Road and tagged Courthouse Museum, Lake Yosemite, Merced CA, Merced Historical Society. Bookmark the permalink.