We spent the Christmas weekend at St Orre’s. After a frantic Friday morning picking up wine, chocolate and corn-oats-barley (COB) for presents (hey, even wild turkeys get presents!) we got on the road about 2:30. It was a beautiful, bright blue day, and chilly. 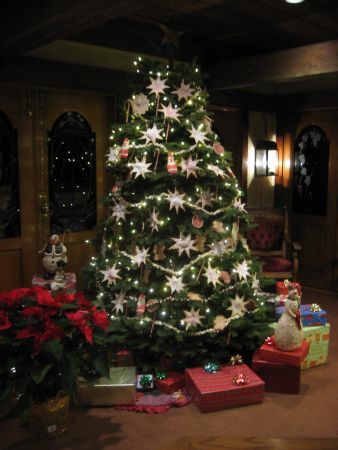 Rosemary’s tree, with its gingerbread and cookie-dough ornaments, was beautiful again this year, and the sunlight lanced through the stained glass to create a spectacular sunset. 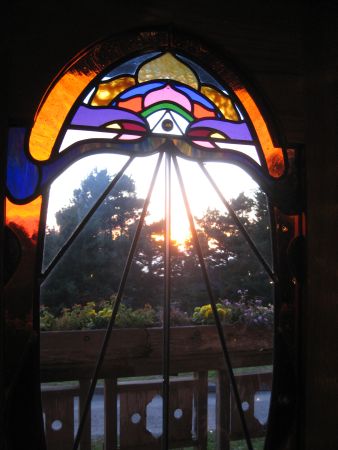 After we unpacked in our cabin – Treehouse – we walked back down to the lodge for our 7:00 reservation for dinner. The dining room was practically empty. At the window table across from us, a young Russian man ate by himself, reading a book. Apparently he had a room in the lodge, but we didn’t see him again all weekend.

I had the chili relleno appetizer and Spouse had the mussels in garlic and white wine sauce. The relleno is sprinkled with finely diced red and green peppers, like confetti. The crust is crisp and very light, with the pepper showing through. This appetizer never tastes like breading; I’m not even sure what they dip the chili in. When I cut into it, a river of molten jack cheese flowed out. The white wine sauce provided just enough sharpness for the mussels, Spouse reported.

He had the chilled pumpkin soup, which was like pumpkin mousse, because he is not a big fan of fennel. I chose the fennel soup because it was the warm soup and I was having trouble getting warm. The texture was velvety, with a little mound of tiny shoestring potatoes as a garnish. The flavor was very subtle. One might even say “bland.” I liked, but did not love, the soup.

The “salad” made up for anything even approaching disappointment with the soup. A poached pear stuffed with lightly candied nuts perched atop a stack of endive, drizzled with a pear vinaigrette, finished with a surprisingly mild gorgonzola, a delicious parade of flavors.

I had the pheasant. Andouillie sausage and pistachio nuts are stuffed under the skin and the bird is roasted. The sausage and pistachio stuffing is a perfect complement to the light, sweet meat. The pheasant rests on a pair of risotto pancakes with truffles. The rich earthiness of the truffles was almost too much, actually.  A serving of steamed baby vegetables rounded out the plate.

The rack of boar, Spouse informed me, was not “the other white meat.” The dense, slightly spicy meat was served with a spiced apple and apple-potato latkes. It was tender. One bite, and the flavors rolled across my tongue in layers. Baby vegetables also rounded out his dish.

I had the huckleberry bread pudding with whiskey caramel sauce and vanilla cinnamon ice cream. Huckleberries are about the same color as blueberries but I think they are actually in the gooseberry family. These little sapphire gems added a sparkle of tartness to the dense pudding. The caramel sauce was so intense it was almost smoky in flavor. The ice cream balanced the other flavors. 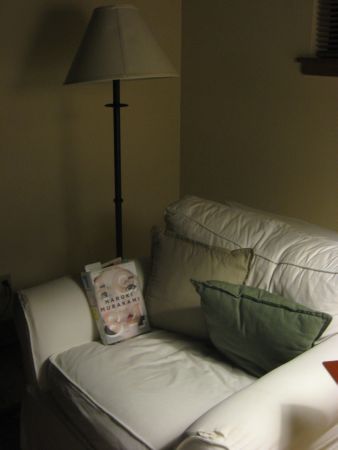 That was our first dinner. Bundled up in coats, vests and scarves, we hurried through the star- scattered darkness to our cabin. Spouse built a big fire in the Franklin stove. I had coffee with dinner, but with the meal, and the dancing fire, I soon fell asleep.