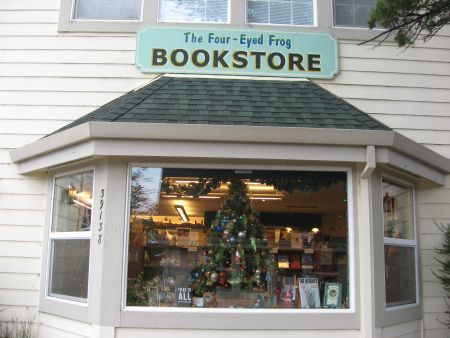 I got two fantasy books for Christmas; The Bards of the Bone Plain by Patricia McKillip and a slim Charles de Lint book, Medicine Road. Spouse got the book on the Royal Society, Seeing Further, which was edited by Bill Bryson, and the latest Sue Grafton mystery, V is for Vengeance.

Spouse also miraculously “found” in his duffle bag A Game of Thrones, which he insisted I must have given to him. (Him: “Well, if you didn’t give it to me, how’d it get in my duffle bag?” Me: “Exactly my question!”) He is currently reading it and I have told him he can’t talk about it until I have.

We each got a gift card to the Four-Eyed Frog, and I picked up Prague Cemetery, by Umberto Eco. It hasn’t gotten great reviews, but dude! It’s Umberto Eco! I looked for the second volume of A Song of Ice and Fire, for the larcenous spouse who absconded with my copy of Game of Thrones, but they only had Books Three and Four. (Spouse:  “It’s one of three?” Me: “No, more like one of six. So, do you want to give it back?” Him: “No.”)

This was not a Christmas book, but I am thoroughly enjoying Inside of a Dog, by Alexandra Horowitz. This is nonfiction, a scientific and loving study of the animal we call our best friend. Horowitz affectionately and gracefully debunks many of our myths about dogs – and wolves, too, for that matter. Last Christmas I read The Philosopher and the Wolf – this year, a similar topic, a very different approach.

Not a Christmas book either, but it’s hard not to blog about Haruki Murakami’s latest tome, 1Q84. I say “tome” because is it 924 pages long. The Guardian UK reviewer liked it; the Washington Post liked it; the New York Times reviewer didn’t like and, in my opinion, didn’t get it. To be fair, it’s a flawed book, with several large story lines unfinished, seemingly, at the end, but that is by design. Murakami is one of those fantasists, or surrealists, who presumes that if your main character leaves a reality, they no longer will know what’s happening in that reality. There’s no scrying pool, magic mirror or convenient re-cap for you if you jump dimensions. This is internally consistent, but not particularly pleasing.

Many, many things about this long and wonderful book are pleasing though. On one hand, this is another of Murakami’s “simple love stories;” two people who belong together and the question of whether they will find each other. The book unfolds over nine months, following each of these characters; Aomame, an attractive young physical trainer, female, who also performs a select and dangerous service for a wealthy widow, and Tengo, a “cram school” math teacher who writes novels. The year is 1984. Aomame, late for a critical appointment, is stuck in gridlock on the elevated freeway in Tokyo. Following the rather strange instructions of her helpful cabbie, Aomame clambers down a rickety emergency access stairway (in bare feet and a miniskirt). When she reaches the surface, the world around her is different. She notices more and more serious differences as time goes on, although others around her are unaware of these changes, such as the fact that the moon now has a follower, a smaller, lumpy mossy green moon.

Tengo, meanwhile, has been sucked into an unethical and probably illegal scheme masterminded by Komatsu, a brilliant, eccentric editor. Tengo, who was judging a fiction contest, discovered a novella called Air Chrysalis. The book is completely original, innovative, maybe even brilliant, but the prose is terrible. Komatsu commissions Tengo to work with the author, an enigmatic 17 year old girl, to rewrite it. As he throws himself into this morally murky assignment, Tengo begins to notice differences in the world around him, such as the appearance of two moons in the sky, just like in Air Chrysalis.

That’s all perfectly straightforward, but I haven’t written about the widow and her mission; about the “spiritual society” of Sakagaki, from which the author of Air Chrysalis fled, and its disturbing treatment of prepubescent “shrine maidens”; about the Little People, characters in Air Chrysalis which the author says are real; about the cable bill collector; about Ushigawa; about the crow that visits Tengo’s house every evening; about the recurring theme of violence against women, whether it is the suicide of Aomame’s best friend in the past or the suspicious death of her police-woman drinking-buddy in the present, the questionable death of the widow’s daughter, who was trapped in an abusive marriage or the strangulation of an unnamed woman with an historical connection to one of the main characters. I haven’t written about Aomame’s childhood in the Society of Witnesses (we call them Jehovah’s Witnesses), and how she repudiated that belief system when she was ten. And I haven’t written at all about Murakami’s writing; by turns simple, homely (in the sense of being “like home”) hard-boiled, suspenseful, funny or lyrical.

At times the book is pure science-fiction – the air chrysalis and the entities it produces, the maza and the dohta – are not unlike scifi props we’ve seen before. At times, like with the “town of cats” and the scary cable bill collector, we seem to have wandered into a dark fantasy. Or, if Tengo’s work on Air Chrysalis has wrought changes in the world, or at least in Aomame, then we are squarely in the middle of downtown meta-fiction.

I won’t say any more about the story, except to give you this as a study question: the cabbie says something important to Aomame before he directs her to the stairway. What does he mean?

I do want to talk about the book itself. In Japan, these three books were published in two volumes; Books One and Two in one volume, Book Three separately. In America, they supersized it. The bloody thing must weigh eight pounds. It is not only a book, it’s an excellent defensive weapon. The publisher also pulled out all the stops to make this book beautiful. It has a fancy cover with a dust jacket that interacts with the cover art in a specific way, and lots of little nice – and maddening—details, like mirror-imaged page numbers. This is lovely and goes with the story but can be irritating if you wonder what page you are on.

If you got it on Kindle you would lose the cover detail, and the elegant section breaks, but it might be worth waiting for the paperback, if you can hold out that long. Obviously, I could not.

This entry was posted in Book Reviews and tagged books, Four Eyed Frog, Game of Thrones, Haruki Murakami, Inside of a Dog. Bookmark the permalink.