I Can’t See My Church From Here 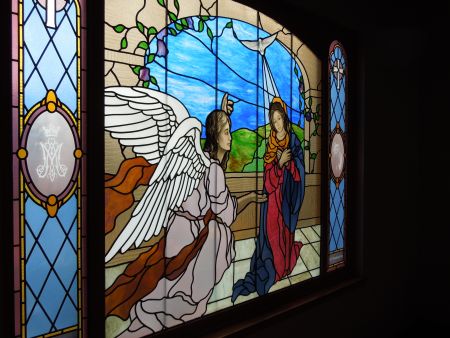 I can see my house from here. That’s what I thought when my secretary brought in the map to the lunch event I was covering for my boss. I said, “If someone had told the Mary Agatha Furth Center was near Our Lady of Guadalupe Center I would have found it.”

She said, “It’s right next to the church, on the same grounds.”

Our Lady of Guadalupe was my church. It wasn’t a church when I was growing up three blocks away. It was an Apostolic Center. In fact, it wasn’t an Apostolic Center; it wasn’t even there. We helped build it.  I mean literally; my dad and I went over there on several weekends. I carried stuff, (mostly I played around the gnarled fig tree in the back, or hung out under a group of oak trees with some of the kids from the trailer park behind it) and my dad measured and sawed timber and hammered nails. The original building was single story, with cinderblock walls. There were no pews; just hard metal folding chairs that lived in a long closet in the back and got pulled out and set up before mass. There was no jewel-toned stained glass, just an amateurish but lovingly created mosaic of Our Lady of Guadalupe. I know it was “lovingly created” because my mother made it. 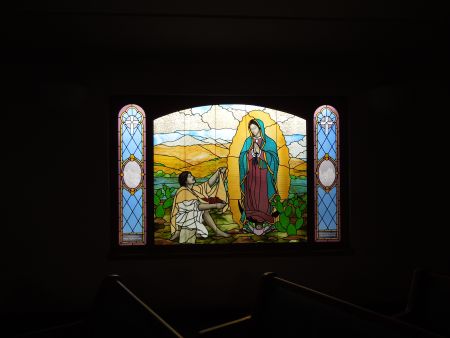 As the name implied, the Guadalupe Center wasn’t just a church. They held well-child clinics there, and I worked at a TB inoculation workshop one time, after school until nine o’clock. The priest and brothers worked with immigrant agricultural workers, held literacy classes and did voter registration drives. There was a bible study group my parents joined with six other couples. From the study group, they branched out, running a food pantry (we stored the canned goods in an outbuilding on our property) and even adding a used-clothing “free-store.” The local welfare department and the parish would refer families to our house. We delivered meals to families the day before Christmas. We helped with food drives and clothing drives.

I remember walking to church in spring and summer, through the knee high wild oats, across the gravel parking lot into that little room on Saturday evenings. I remember Easter service there. I remember the kitchen doubling as the confessional (because it didn’t have a confessional) and being uncomfortable going to confession because I had to look at Father Ken while I talked.

This was the 1970s. Nuns at my Catholic school were traveling in buses to the Central Valley to work with the United Farm Workers. Nuns and priests engaged in community organizing, practiced social justice. Priests were getting married and keeping it a secret – in fact, Father Ken was married the entire time he was at Guadalupe Center, and just didn’t tell anybody.

When he did come forward and share this with the congregation, he was immediately sent away. The Bishop sent in an old-school priest who ended a lot of the non-church events. He invited himself to the bible study group. After a couple of weeks, he suggested that he should lead the group and direct the content. The group politely declined this generous offer. Two weeks later, during his sermon, he read out our names, and ended the list by saying, “These families are no longer members of this parish.”

I should have been shocked or devastated. I was a teenager – I was jazzed. Elated. I was a rebel! How many kids at St Ursuline’s could claim they’d been read out of their parish? None, that’s how many. Did it disillusion me? Sure. Even at fifteen I recognized a naked power play when I saw it. My parents started driving up to the town north of us to go to church, but I didn’t go with them. And I haven’t gone back. 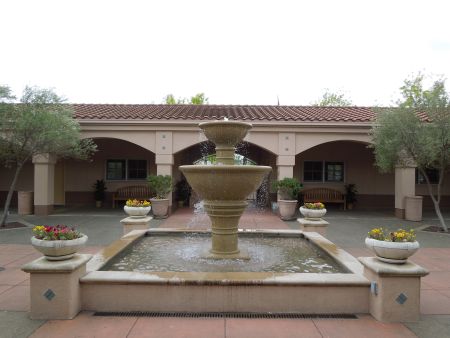 Our Lady of Guadalupe is different now. The old building probably held seventy-five people at best; the new church holds three times that. It’s white and airy, with pretty stained glass, an altar that draws all eyes and a fountain in the courtyard. The knobby fig tree and the cluster of oaks are gone, turned into parking, although the decrepit trailer park is still right behind it. The Mary Agatha Furth Center is nearly the size of the church, with a good sound system and nice acoustics. 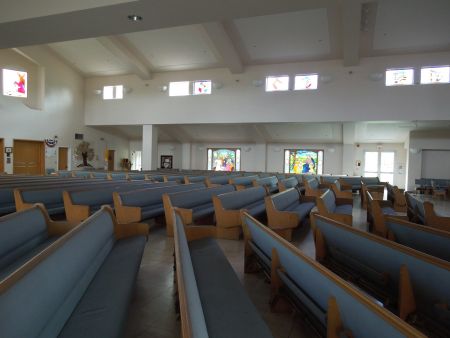 The field we used to walk through on our way to church is a strip mall now; the pear orchard across the street from my house is a subdivision of large stucco homes. The two-lane road I took my horse down is four lanes now, checked by stoplights. 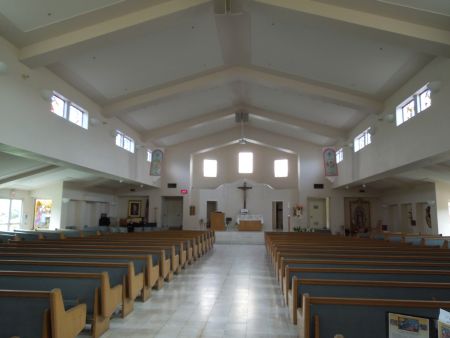 In 1982, the little cinderblock building burned. The cause of the fire was arson. At the time I could not understand why anyone would burn a place of comfort and refuge like a church. Now, of course, I can easily imagine why someone might have enough anger toward the Catholic institution to want to cleanse it with fire.

The diocese is different too. It has weathered, but not too well, numerous scandals; a bishop who covered up for his lover, a fellow priest, who embezzled money; several child molesters moved from church to church, given access to more children; a handful of expensive lawsuits that have depleted the treasury and jeopardized at least one parish’s building fund. Our Lady of Guadalupe church is a building of light and elegant beauty, but I didn’t feel welcomed or comfortable in it. I didn’t feel at home. 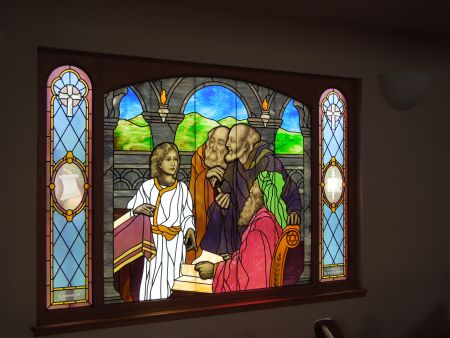 3 Responses to I Can’t See My Church From Here