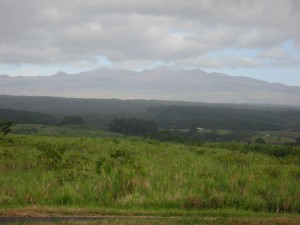 Before we went to see the lava flow, my friend L took us to a kava bar in the Kalapana district. “Kava and lava,” she said. We made a left onto a street that paralleled the highway and drove for about a mile. Soon we were looking at dunes. L made a right and followed the road into a small square parking lot. Behind us was a café and fast-food place that sold coffee drinks. A sign, hand-lettered on plywood, advertised a nature walk. Palm trees, ferns and hibiscus bushes lined a sinuous curve of walkway along the café area. We got out and walked over in the shade of the vegetation to the kava bar.

The bar looked like those places you see in movies set in tropical resorts, with a palm-thatched roof and a three-sided counter lined with stools. The back wall had a cold case with some beer and some soft drinks, and a large ice chest sat on a stool near the back. The bartender was short, smiling, and friendly. He was sitting on the inside of the bar. Along the parking lot side sat an older white-haired man, who also gave us a nod and a friendly smile.

“A kava,” said my friend L, and I echoed it. I reached for my wallet but L waved me off.

Our bartender opened the chest and took out a bottle. He pulled down two clear plastic water cups, about six-ounce size, and poured in the kava mixture.

L asked her other guests if they wanted one. They each said no.

I looked at the cup. The liquid was a translucent green/brown/yellowish/gray, and not visually appealing, particularly. I lifted the glass. The smell was pleasant, herbal. I took a small sip.

Mmm. Imagine a very bitter carrot, mixed with a little bit of rotting vegetables, and– I swallowed.

The white-haired guy at the bar said, “How are you enjoying your kava mud-water?”

I took another swallow. “It takes some getting used to,” I said.

Kava, , or ‘awa, or yaqona in Fiji, or sakau, is kind of a tranquilizer. It induces a feeling of well-being with no loss of mental clarity. The traditional beverage is made from the pulverized root of the plant (which is about 80% liquid) and mixed with water to a palatable strength. The Latin botanical name of the plant is Piper Methysticum, which means, “intoxicating pepper” but which looks like it should be the name of a wizard in a fantasy novel. “If Piper Methysticum refuses to help us, then all is lost!”

The beverage I was drinking is a traditional way to serve kava. Maori elders in New Zealand use a kava drink ceremonially at the beginning of tribal councils. Here in mainland US you can buy kava powdered, in capsule form, in some health food stores. They recommend it to calm anxiety and help with insomnia. Before you run out and buy some though, consider that the powdered kava may be made of leaves and stems, which you don’t want. The main reason is potency; the heaviest concentration of kavalactones, which are the ‘mellowing” agents, is in the root; and the other reason is health. A study done in 2001 showed that while there were no liver-toxins in the roots of the kava plant, there were some in the leaves and stems. Go to Hawaii and drink it with water. Trust me.

I leaned back against the bar and sipped my “kava mud-water.” It was late afternoon, and a breeze rustled through the palms, the ferns and the hibiscus. J, one of L’s other visitors, wandered off to explore the nature walk. From the house up the hill slightly to our left, two small children came out and started to play in the driveway, giggling. After a few more sips I realized that the inside of my mouth felt numb, a typical kava response. “It’s great when you have to go to the dentist,” said L, and laughed.

L struck up a conversation with the stand owner about music. She had heard musicians, and seen hula, there several times. I realized I was feeling very good. I felt relaxed, friendly. That usual, almost-invisible barrier between observer-me and the world had faded, but I wasn’t having the short-term memory issues or loss of coordination I tend to experience (quickly) with alcohol. In short, I was having a good time. This is a good time in relation to being in Hawaii, where I had already been having a pretty good time for several days.

I looked at the glass.

I had drunk about half of the six ounces.

I’m not very mathematical, but I did figure out that I felt about as good as I usually feel halfway through my second glass of wine—on three ounces of kava. Wow.

I asked the bartender if he had ever tried putting honey in the kava beverage. “No,” he said. “It doesn’t dissolve. I have put coconut syrup though, for people who want it sweeter. You want coconut syrup?” I thanked him and said no. The thought of coconut added to the ripe ditch-greens flavor just didn’t seem appealing.

I decided I was done with the kava, but I offered L’s son Daniel a taste. He took two stips through the narrow red straw. He was not impressed.

Later, when I got home, I found an article on the internet about kava in New Zealand, where it is legal but there is limit to how much you can have “for personal use,” which means that young tribal people find it easier to use alcohol. Tribal elders are upset because kava has ceremonial value but also because kava does not create the hostility and violence that alcohol consumption can. Clearly this plant, while lowering inhibitions, works on different parts of the brain. For me, it created a sense of optimism and openness. In a tribal council, where you are trying to work out problems collaboratively, I think this would be excellent. I wouldn’t want to knock back a couple of kavas in Las Vegas, through, and then go wandering around the strip. Of course, if I could find kava on the strip in Las Vegas, it would be mixed with some fancy-flavored vodka (New! Stoli Papaya!), and have an umbrella in it—and I wouldn’t be in Las Vegas, or on the strip, in the first place, so the chances of that happening are probably small.

Except that is doesn’t taste very good—and it’s about three times as strong—having a kava drink with your friends is like sitting on the deck after dinner and sipping a glass of wine.

L finished hers, then sent her daughter to buy her some coffee, since she would be driving us up to watch the lava flow into the ocean.