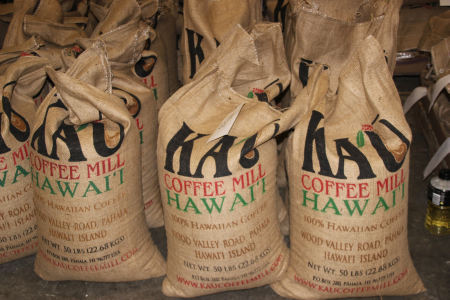 Edmond Olson made his first fortune with gunite, a particular concrete mixture best known for lining swimming pools. He made his second fortune with self-storage facilities. Now 82, Olson cashed out of the storage units, to the tune of about $46 million, and has reinvented himself as a coffee grower, macadamia nut orchardist and conservationist. Olson, probably the largest landowner in the state of Hawaii, is the “angel” partner behind Ka’u Coffee Mill and mac nut farm.

Ka’u, located in the south of the big island, is a district roughly the size of the entire island of Oahu. It has no surface running streams and it gets  a lot less rain than the eastern side, but there is plenty of water at the top of the mountain, in the rainforest. The trick is getting it down to the fields, and they do that, every day. 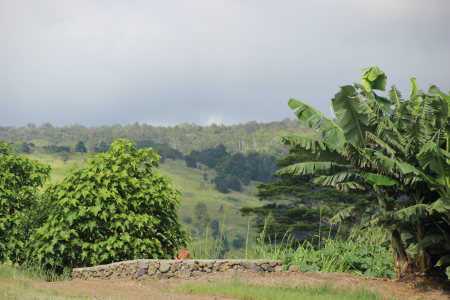 Up the hill beyond the stone wall is rainforest

Since the 1870s when the Brewers moved in, this had been sugar plantation land. The Brewers were one of the five Big Sugar companies. Gradually, various reasons (increased safety regulation, unions negotiating better wages, etc) made Hawaii more expensive that other parts of the world, so Big Sugar bailed, leaving Ka’u almost completely by 1996. They leased tracts of land to their plantation workers, and one couple, Trini and Francis, decided to grow coffee beans. They were something of a laughingstock among their friends until they began selling their coffee berries (called cherry) to Kona. Now there are 45 independent coffee growers in Ka’u. Many of them sell to the Ka’u Mill. 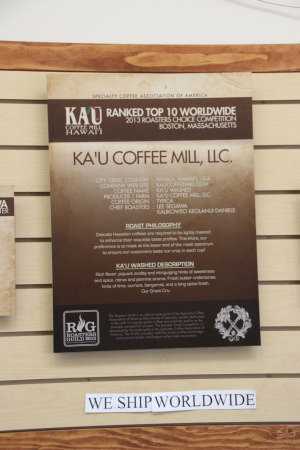 Just in time for the holidays!

Water comes down from the rainforest ridge via flumes that are currently being rebuilt. The flumes draw water that is collected from horizontals wells — or I might call them tunnels — originally dug by Chinese laborers at the turn of the 20th century. In the heyday of the sugar biz, the plantations used 6.5 million gallons of water a day. I needed a visual for that one; that about 10 Olympic swimming pools’ worth of water, daily. The tunnels provide that.

Lou was our guide on the tour of the mill. He told us that coffee plants, while technically shrubs, can grow up to twenty feet high. Ka’u Coffee Mill has about one hundred acres in plants and they keep them trimmed because they hand pick. They prune the plants in rotation so he was able to show us a taller plant here. Lou is the one in profile. The man with his back to the camera was part of the couple who made up fifty percent of our tour group. They were from Tennessee. 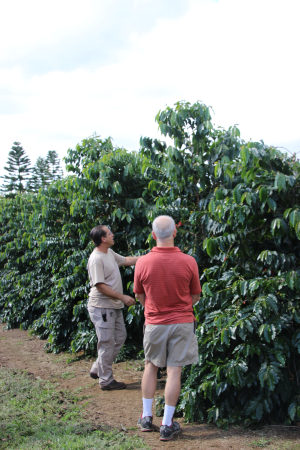 Lou stands next to an unpruned coffee plant

The growing season in Hawaii is about eight months out of the year. The berries, which are called cherry, ripen unevenly, just like berries do everywhere. When they are ripest, they are picked and washed, then put through an agitator that looks like a cheese grater. The agitator strips off the fruit of the cherry, leaving the two seeds inside. Those are the coffee beans. 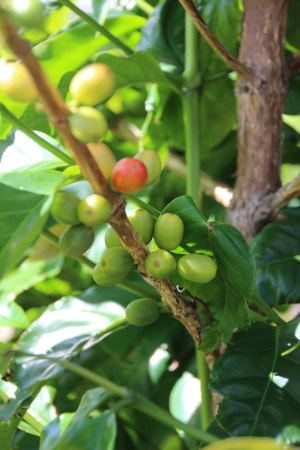 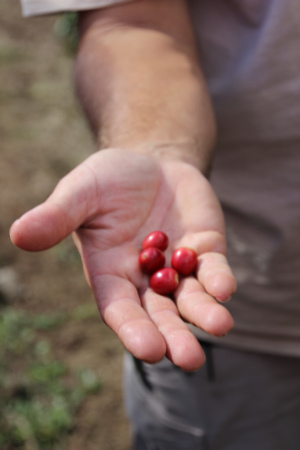 Once the fruit is stripped, the seeds are still sticky with a substance Lou called mucilage. I don’t know if the same thing as the glue we used in grade school, but it’s definitely sticky. The seeds get put through one more process to remove the mucilage. Then they are dried. Some are air-dried. Lou said this is the big bottleneck of the mill. They cannot air dry as fast as the beans come in, so while every bean gets about four hours of air-drying, they mostly dry out in big heated drums (think clothes dryer). 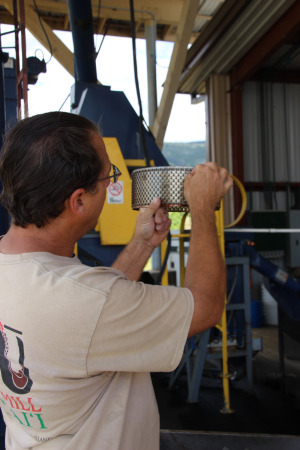 The “cheese grater” removes the fruit, which is recycled as compost 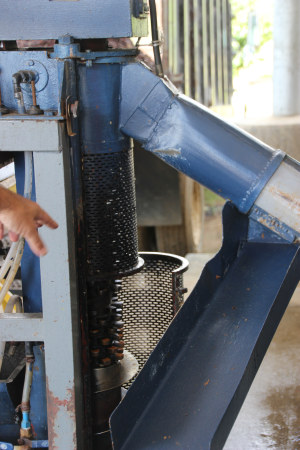 At the stripped, but not dried, stage, the beans are called “parchment” and that is just about the color. After they come out of the dryers,  they have changed to a pale gray-green, a color Lou called jade. These are the “green beans.” Green coffee beans, Lou said, are the second-most traded commodity after petroleum. 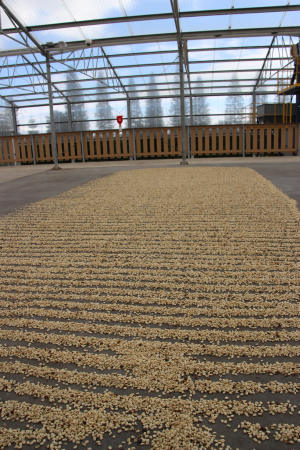 Parchment beans getting a touch of the sun 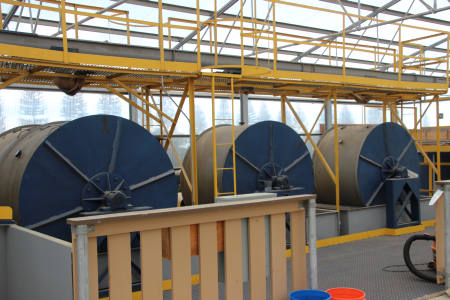 Ka’u Coffee Mill roasts small batches on site to sell through their website or at the tasting room. Lou showed us a couple of variations on the standard process. One is called “natural,” or unwashed, where the cherry fruit dries onto the beans before they are treated. The other process is more like semi-washed. The fruit is stripped but the mucilage is left, creating beans that look like, well, pinto beans… 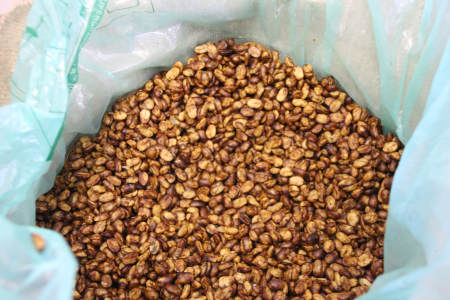 … and smell like molasses, or like the Tennessee woman said, like cured tobacco. This is a specialty blend. I liked the sweet-earthy smell but I didn’t get a chance to taste it. The other specialty coffee bean is peaberry, at the shocking price of $38/pound. Peaberry happens when the two seeds inside the cherry grow together into one bean. Why this is better I don’t know.

Lou reminded us all that there is no caffeine in the fruit, and that caffeine is released during the drying and roasting process. Medium roasted beans contain the highest caffeine content; darker roasts process caffeine out of the bean.

He also lectured us about storing our beans correctly. The refrigerator or freezer is not correct. An airtight container in a cupboard away from light is the very best. I decided to try this. Linda, who lives on the humidity-rich Hilo side of the island, firmly declined. When I say humidity-rich, let me offer an example. While we were gone, Hilo had a rainstorm that dumped six inches of water in fewer than twelve hours. Linda will risk a slight loss of taste to protect her beans from mold.

Ka’u Coffee Mill uses about 1.5 million gallons of water daily. They are building a hydroelectric plant on site, to be operational 2014, to provide the mill’s electricity from the uphill water.

Ka’u Coffee Mill is winning gold medals at worldwide coffee competitions, moving up to seriously challenge Kona. Generally, I like darker roasts but I brought home a pound of their medium roast blend and find I enjoy the layers of flavor. I can drink it without cream.

While peaberry is prohibitively expensive, the mill offers two-ounce bags for about eight dollars; it’s a nice way to sample it or give someone a gift without worrying about how you’re going to meet next month’s mortgage payment.