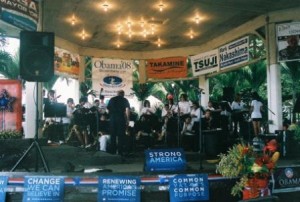 On Friday night, September 19, L took me to a Democratic event at the Mooheau Bandstand in Hilo.  The Bandstand is downtown, right across the highway from the seawall, overlooking the bay.  I had walked through it once before at night, when it was empty, and I thought it was rather small, but it held over 300 people easily and another couple hundred spilled out onto the grass. 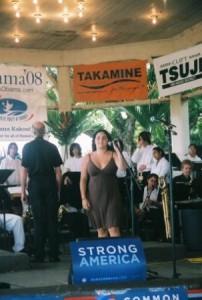 We had music from the Honoka’a High School jazz band.  They were pretty darn good.  They had several good vocalists, and the best by far was the young woman who belted out “Respect” as the closing number.  I don’t love jazz, but I thoroughly enjoyed them.  The Downtown Swing Band followed.  They had a wonderful clarinetist, but were using the sound equipment set up for public speaking, not musical mixing, and their performance suffered.

At six, the political part of the event kicked off.  The master of ceremonies was a Hawaiian comedian named Andy Bumentai.  (www.andybumentai.com) He bounded onto the stage and began making fun of things right away.  His energy reminded me a little of L’s dog Roxie, only Roxie isn’t so acerbic. If he has been in any movies I will have to rent them, because this guy is funny.

Obama should be president, “because we can’t have things going on like they have for the past eight years, and because I’d love to have a President named ‘Barack.’  I could do fifteen minutes on that alone.  We already have a mayoral candidate in Honolulu named Mufi.”  He waved at the various banners for local candidates that festooned the bandstand.  “And I don’t know any of these local people, but  Jet Heng! I want that guy to win!”

From a spot in the crowd, people began to yell and point.  “He’s here!”  Jet Heng, a good-looking young Chinese American stood up, grinning.  Bumentai rose to the occasion.  “There he is!  What, that male model thing isn’t working out for you?” And of course, as Jet sat back down. . . “Cool your jets!”

Bumentai introduced Helene Hale, who is a legend in Hawaiian politics.  She has been active in state politics since. . .well, actually, since before statehood.  She talked briefly about the “Democratic Revolution” in 1954 and her male companions, none of whom could be present that evening.  “Get well, boys,” she said.  She talked about Barack Obama, but mangled his name.  On the third try she got it right, and added, “Well, I’m ninety.” Applause from the crowd.

Hale introduced Maya Soetoro-Ng, Obama’s sister.  They hugged at the podium for several minutes.  When Hale went back to her seat in the front row, Maya said, “Ms. Hale, my brother’s

been called many worse things than what you said.”

Soetero-Ng spoke well, without using place-fillers like “um” and “uh,” a good clear speaker who knows how to match her message exactly to her audience.  She exuded sincerity and a kind of humility.

She talked about the spirit of aloha and the idea of spreading it to the entire nation. (Now there’s a powerful vision!).  She told us about visiting her brother in Chicago after he graduated from Harvard.  She went with him while he visited families who had been impoverished by the closing of the steel mills, connecting them with resources and getting them registered to vote.  Unlike the Republican convention audience, this crowd actually knew what a community organizer does. “And all this,” she said, “while he [Obama] was fielding many, many offers, and rejecting them. Many of them were lucrative, too, because he had been the editor of the Harvard Law Review.”

Soetero-Ng wants us to reach out to friends and family in swing states like Nevada and Colorado to carry her brother’s message. “We need to do the work and tell the stories, to carry our values to the rest of the nation.”

The difference between George Bush and Sarah Palin, according to Bumentai?  “Lipstick.”

Earlier in the program, Bumentai announced that Brian Schatz, the chair of the Hawaii Democratic Committee, was late. Andy assumed a serious mien and said in a radio-announcer voice, “Tonight, the part of Brian Schatz will be played by Andy Bumentai.”  He then did several Palin jokes (see above) and tried a couple of McCain jokes, which weren’t that funny.  He rebounded well though.

Later in the evening he came to the microphone again.  “I just found out that earlier this evening someone was pretending to be Brian Schatz!”  The crowd obligingly went “Oooohh!” and Bumentai said, “I know! Anyway, here is the real Brian Schatz.”  This haule kid came out.  He’s in his late thirties, but looked more youthful to me. He was much more politically correct than the MC, but fiercely competitive.  He wants Hawaii to have the highest margin of votes for Obama of any state.  And, he said, “It’s not just Obama.  We want to run the table.  Every house and senate seat, we want them all!”

At some time during the program, when there was a round of thunderous applause, L leaned over to me and said, I thought, “Reach into the fire.”  I wondered if this was some sort of local volcano reference or a Hawaiian spiritual thing.  A few seconds later my brain corrected the interpretation.  She had said, “Preaching to the choir.”

On the mainland, John McCain’s age is fair game for any comic or political speaker.  Before a Hawaiian audience, the Philipino-Hawaiian Bumentai knew better than to even touch it.  When he addressed Helene Hale from the stage, he called her “Auntie.”  In Hawaii, elders are respected and revered.

Fortunately for Bumentai, Palin is by no stretch of anyone’s imagination an elder.

As I said, there were banners for candidates fluttering all around the edge of the bandstand’s circular roof.  There were eight or nine candidates for the mayor of Hawai’i.  That’s right.  Mayor of Hawai’i.  There are no municipal governments in Hawaii.  There is a state government and then five areas that roughly correspond to counties in California, and the top administration person in each of those areas is mayor.  There is also a council for each county or area. It explains why people actually seem to participate more.  Elected officials, at least on the Big Island, are accessible.  It also creates some situations L and her friends are not happy with, such as one school board for the whole state.

Driving home, L said that hearing Maya Soetoro-Ng speak made Barack Obama “more like a real person.”  I would say that Maya Soetoro-Ng seemed like a genuine person, and she makes her brother real by extension.

Hawaii’s primary was the next day, Saturday.  It seemed like a strange day to hold a primary, but it probably makes it easier for people to vote.  L’s neighbor and friend was a polling place worker.  It was a full day for her, more than 13 hours.  Turnout was lower than hoped, but about what expected.  Everyone agreed that the November election, Obama versus McCain, would be the big one.