Wonders of the North County: Midday at the Oasis 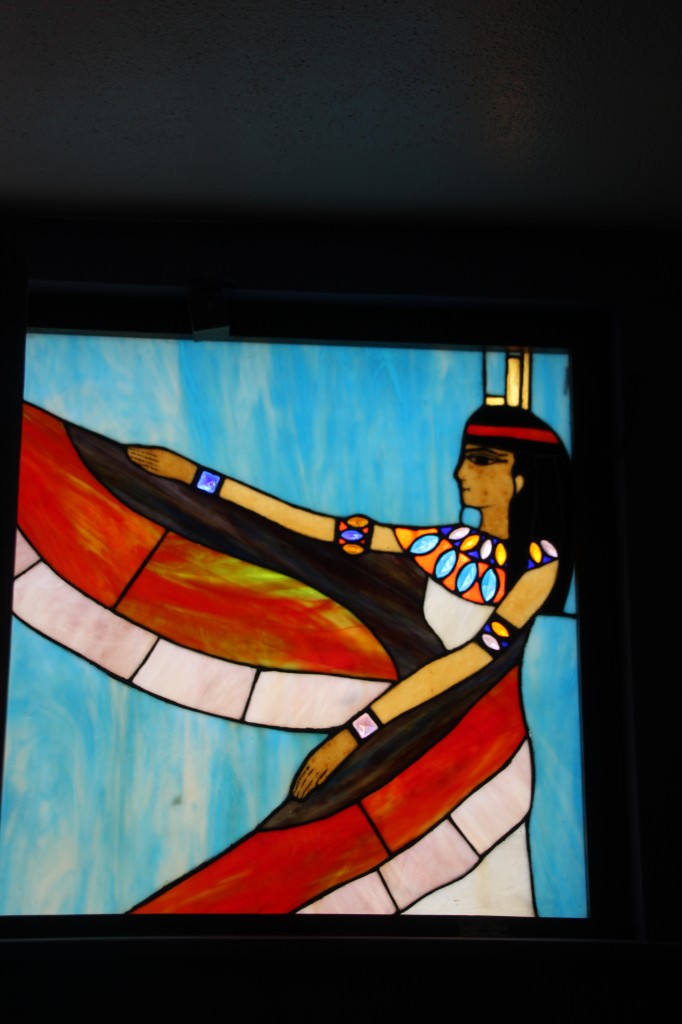 I drove about a half mile into the village of Geyserville. I was going to write that I hadn’t been in Geyserville since high school. I think that would be incorrect. Although I did go to the geysers one time, I think I had never been in the village itself before Monday. Right on the approach, on your left, is the Isis Oasis, the retreat center founded by artist Loreon Vigne in the early 1980s.

(I feel uncomfortable even typing the word Isis into a blog these days. Thanks a lot, religious extremists!)

Isis is a mother goddess associated with the Egyptians. Her father was Ged the earth god and her mother was Nut, the sky goddess. (Ged and Nut, a little homespun, but… ) Her brother, later husband, was Osiris, who managed the souls of the dead. Isis packed some serious juice back in the day, including reanimating her dead husband once.

Vigne got her start as a stained glass and ceramics artist in San Francisco. She and her husband, the beat generation film maker Dion Vigne, were colorful characters. Vigne kept exotic cats; ocelots, bobcats and servals. When San Francisco eventually prohibited private ownership of exotic cats in the city limits, Vigne moved up to Geyserville. 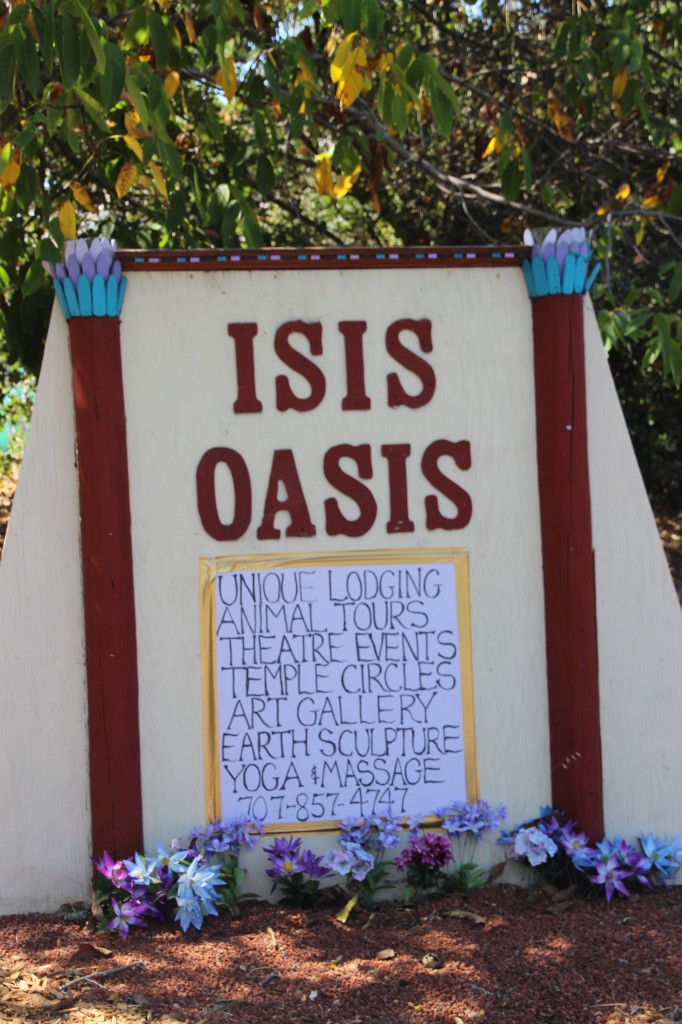 Vigne had several experiences that she believed were encounters with Isis. With all her felines, I’m a bit surprised that is wasn’t Sehkmet, the lion-headed goddess, or Bast, the cat-headed one, but there you go. It was Isis. Vigne took these experiences as a sign that she was to dedicate the property to Isis, and she did. There is a public temple and a larger theater. The public temple is open for personal worship of the goddess by the public every day. The theater holds a service every Sunday which is also open to the public. 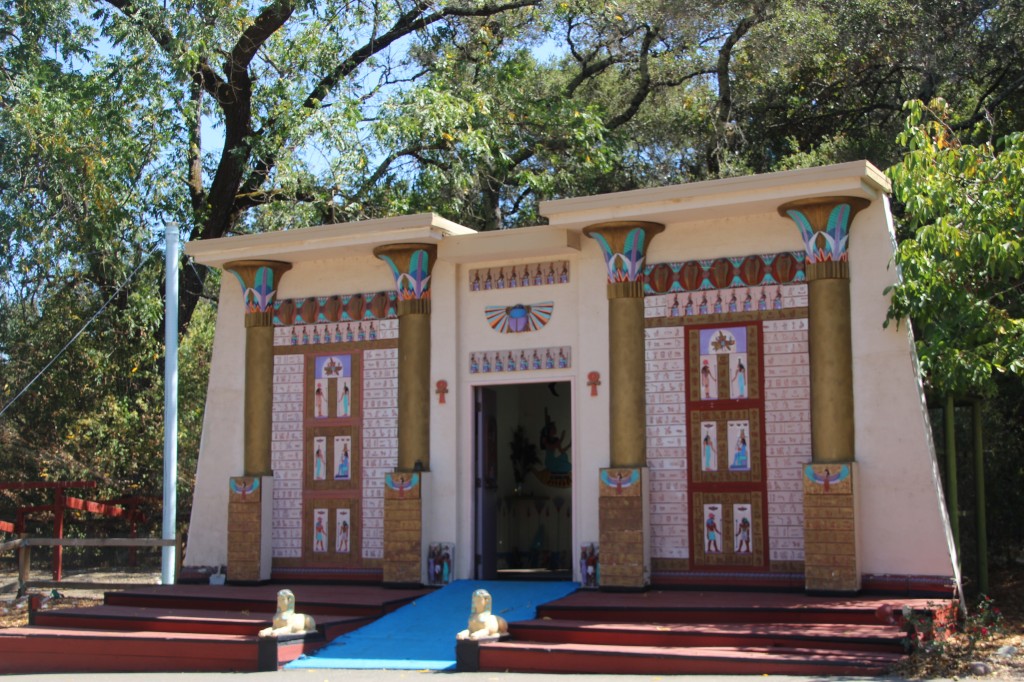 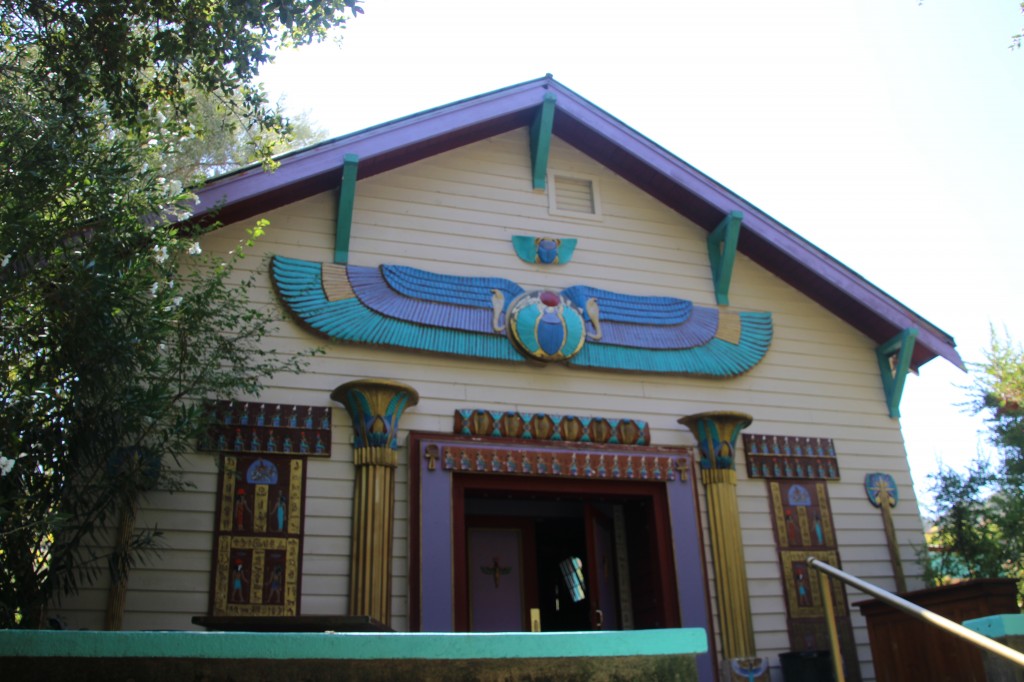 Vigne died in mid-June of this year, and I don’t know what that means for the property, but it is a non-profit organization and there is a board of directors, so I assume it will continue in some form or another.

The place welcomes visitors. I walked up the driveway, listening to the screeching of some bird in the background, and approached a woman who was walking down from the parking lot. I asked if I could walk around.

“Sure,” she said. “The only place that’s off limits is the cat-cages, because the catkeeper isn’t here right now.”  She led me over to show me the birds. Her name began with M, and I’m going to call her M, not out of any sense of secrecy but because I can’t remember her name. I do remember the macaw’s name, though. This is Charlie. 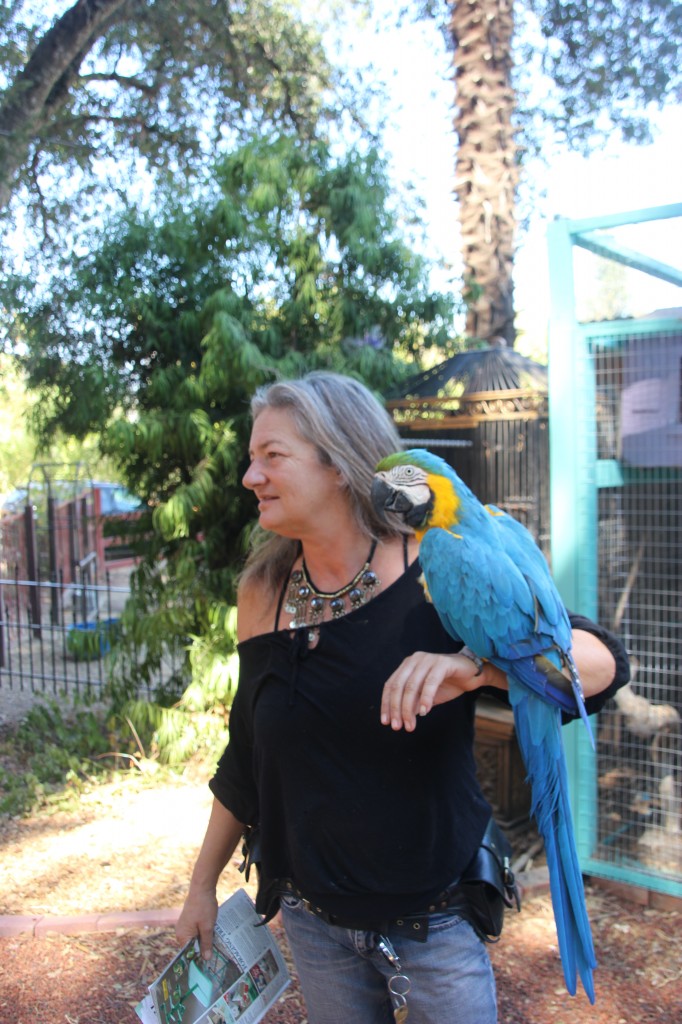 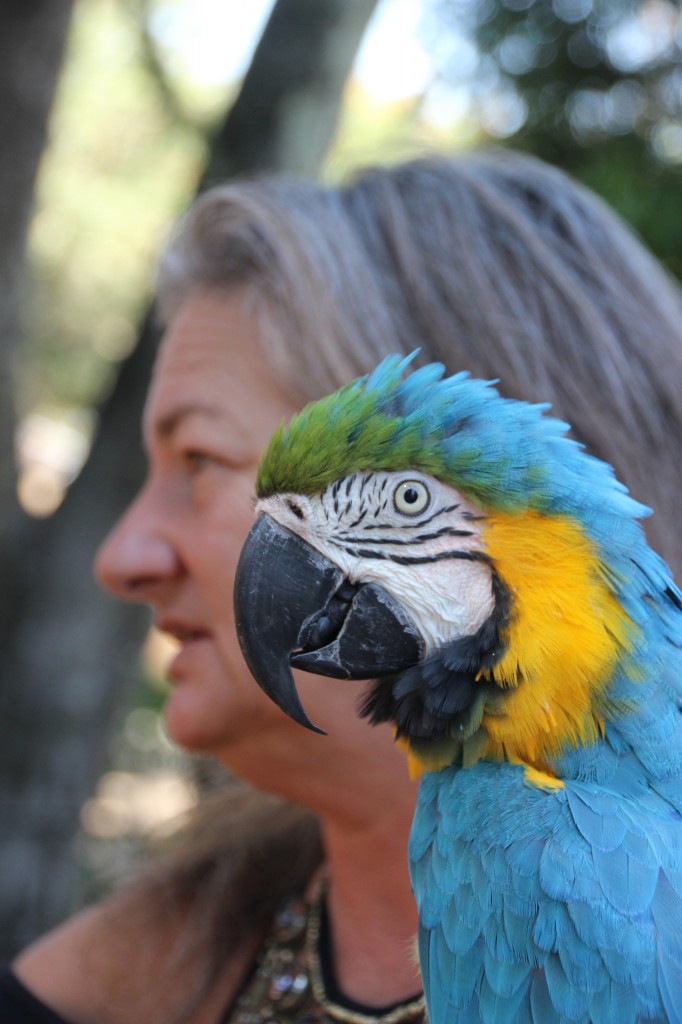 M has been working on the cages of the larger birds (there are many) to make them less like cages and more like habitats. I think there are some bored avians on the property right now, but things are getting better. All the birds had shade, shelter, clean water, and some kind of toy, including a mirror for the peacocks. 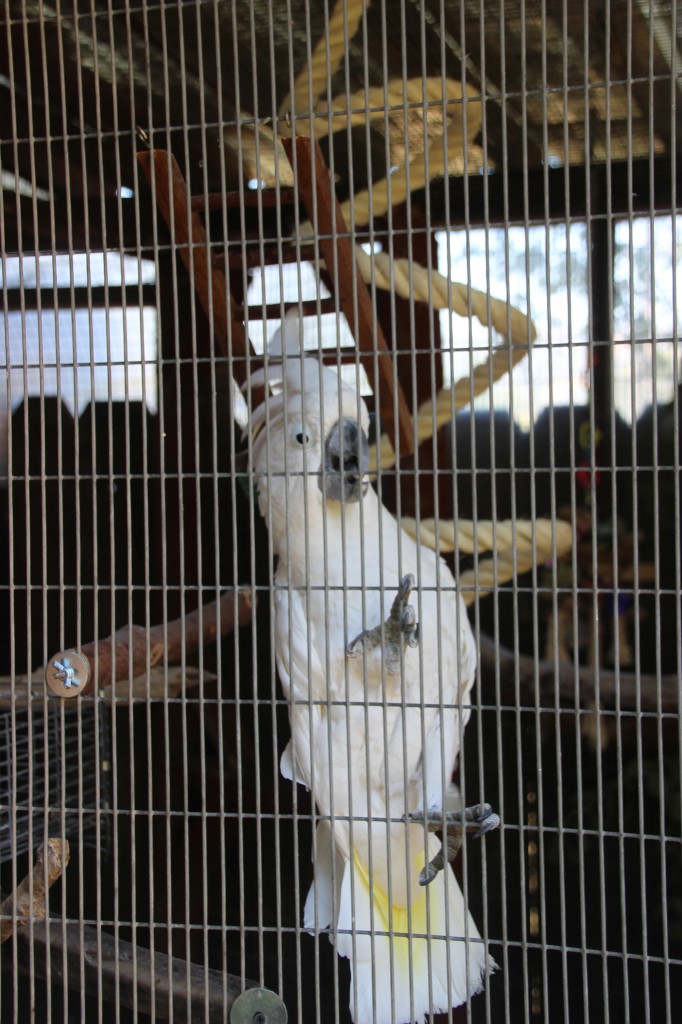 Meet Stanley. Lola, his friend, was napping in the nest box and did not want to be disturbed.

M showed me the pavilion, which is used for performances and events and includes a commerical kitchen, and pointed to the steps up to the theater. The walkway up is lined with cages of exotic pheasants. 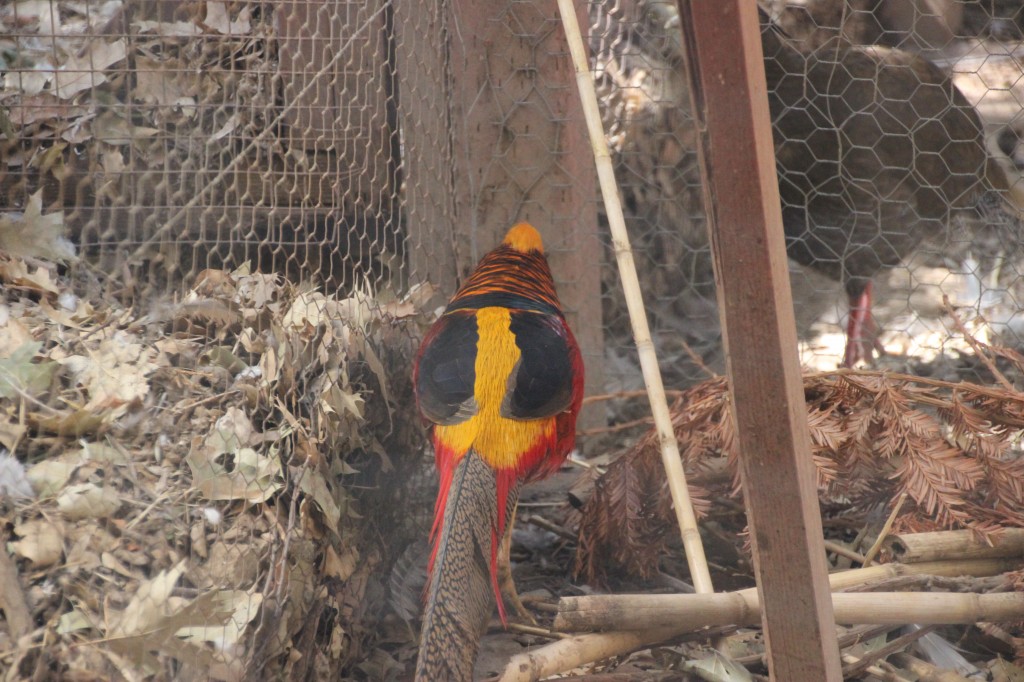 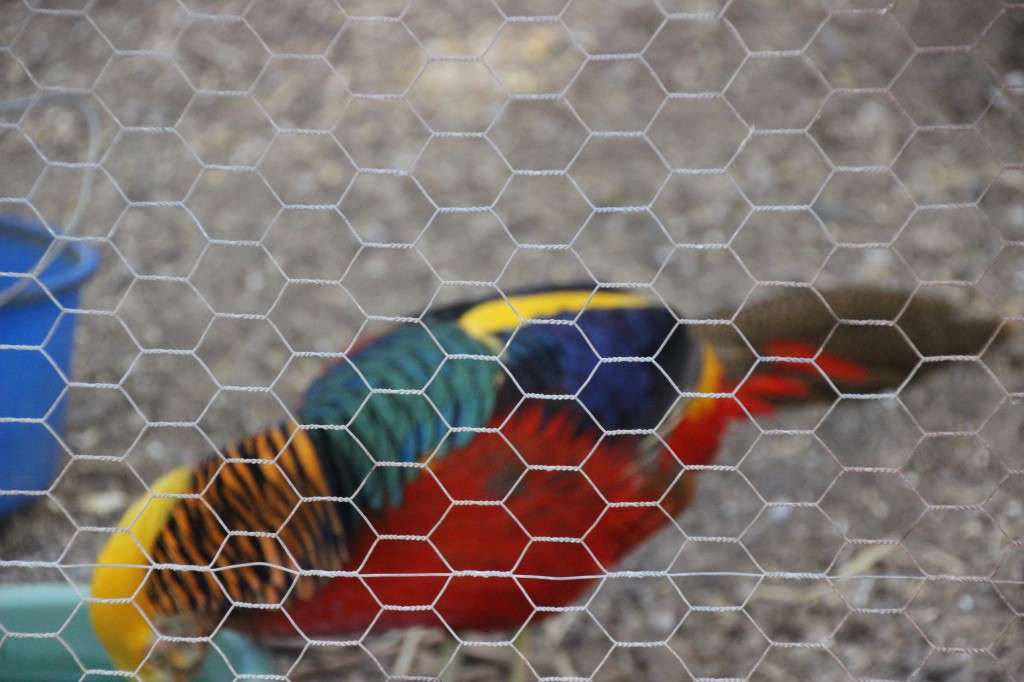 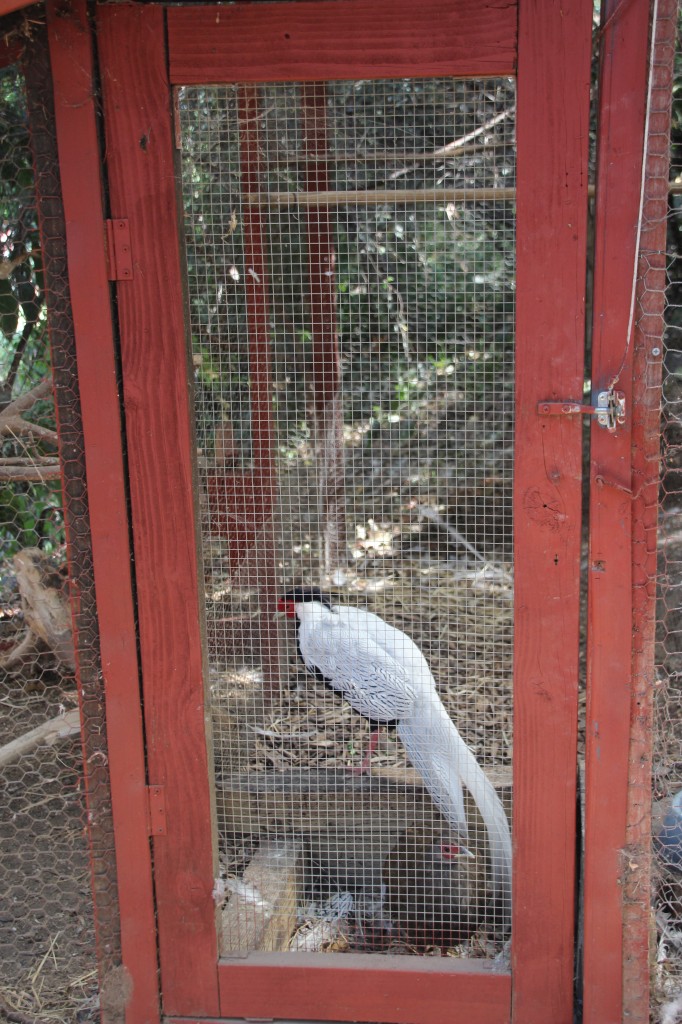 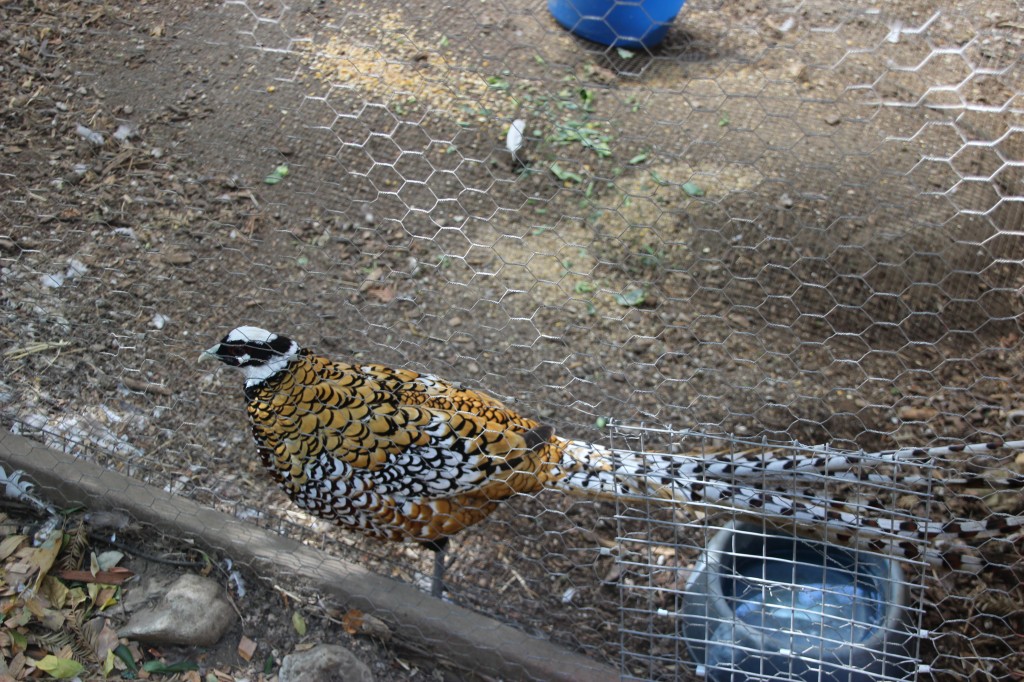 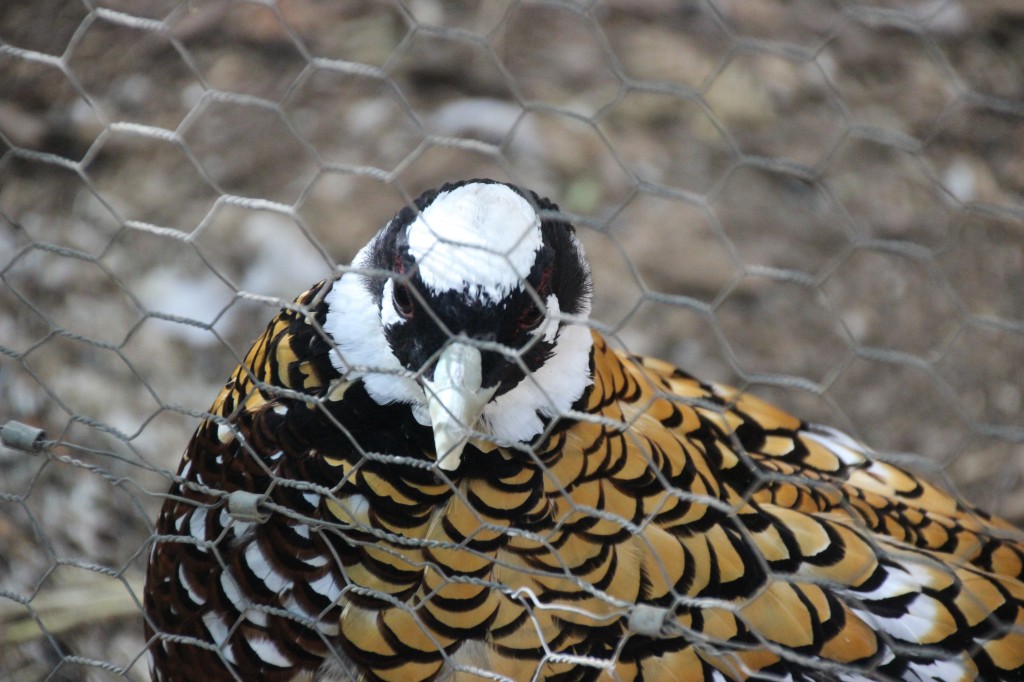 They have a tiny colony of peacocks, with two sets of chicks. Chicken wire, or any situation where you have two parallel planes, are anathema to auto-focus cameras. Or, maybe not — just to the photographers. The camera blithely focuses on the wire, no matter what you do. And if you’re like me and switch to manual focus, it doesn’t get much better. 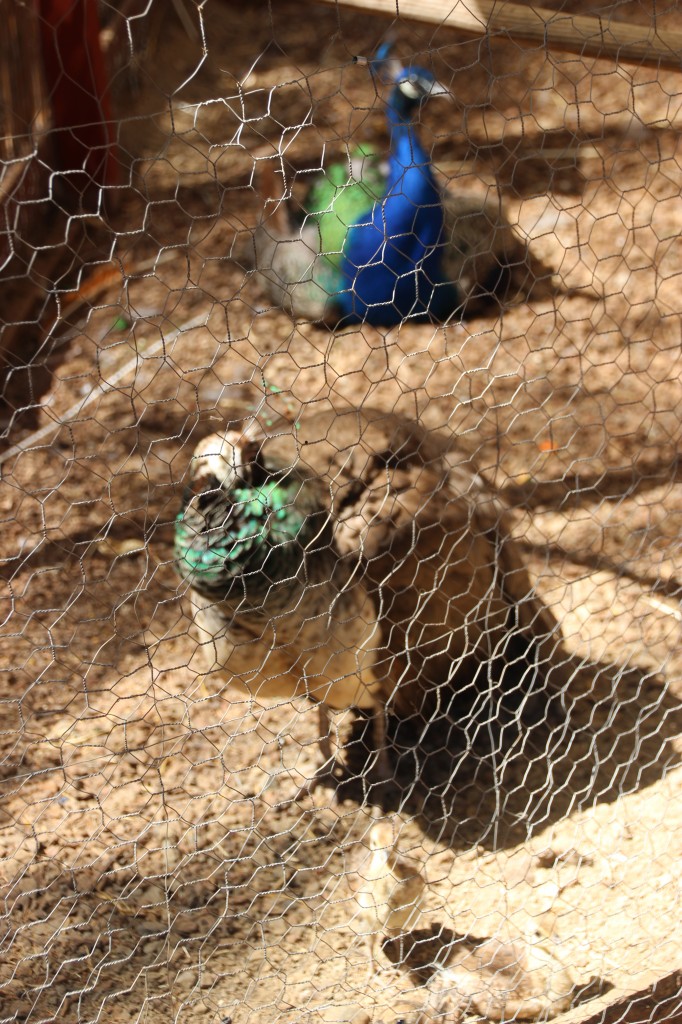 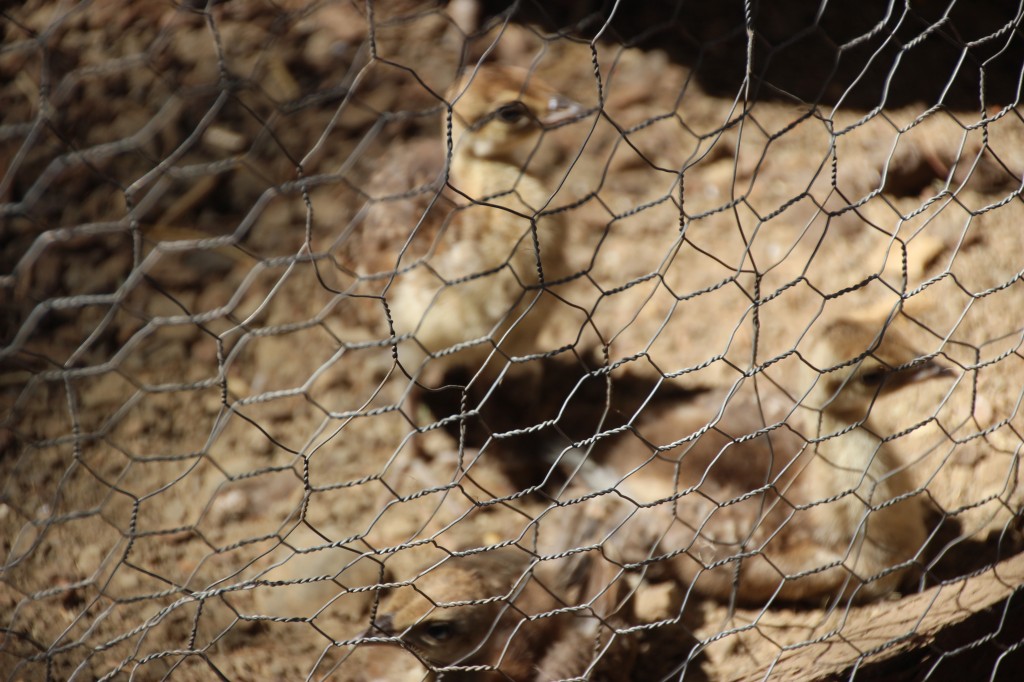 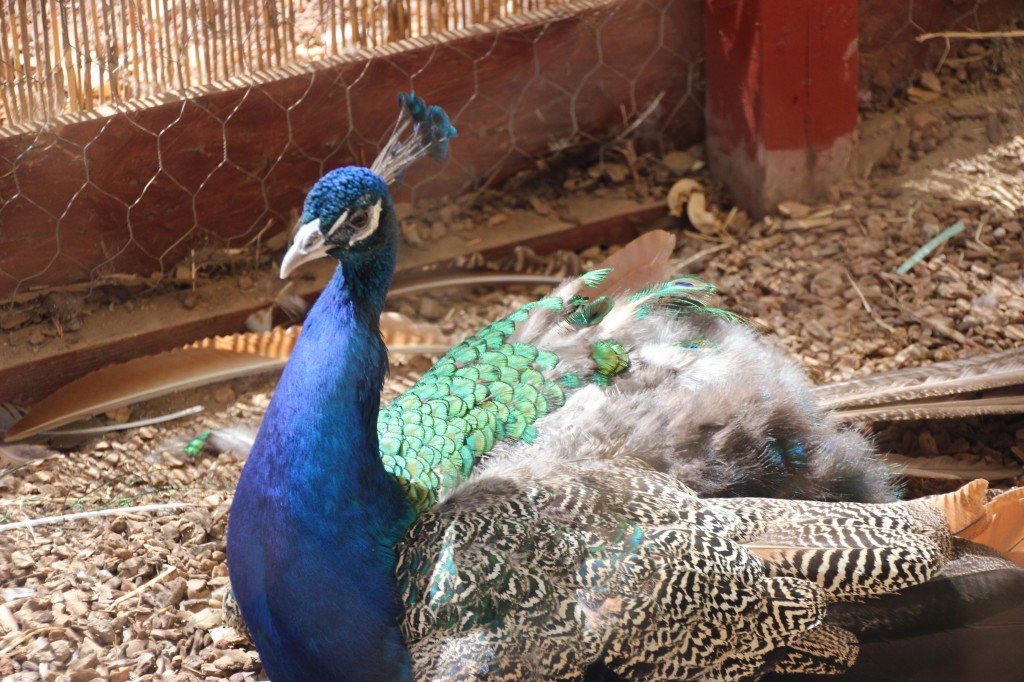 The retreat has 12 rooms and communal bathrooms. As of 2007 (the most recent review I found) the rooms did not have dial-up, wireless or TV, which makes sense since it’s a retreat center. I assume some meals are provided but I don’t know. By now everyone has their own wireless anyway, so that’s probably not a huge setback if you want to stay there. Or you could detox from the internet for a couple of days if you wanted.

The place includes a rambling organic garden. While I was wandering around taking pictures, a friendly young man pointed me toward the cherry tomatoes. “Please eat some,” he said. “They’re ripe. We call them Isis candy.” I found my way to the tomato patch and tried them. Sweet, sun-warmed, a big juicy pop of flavor. Candy indeed. 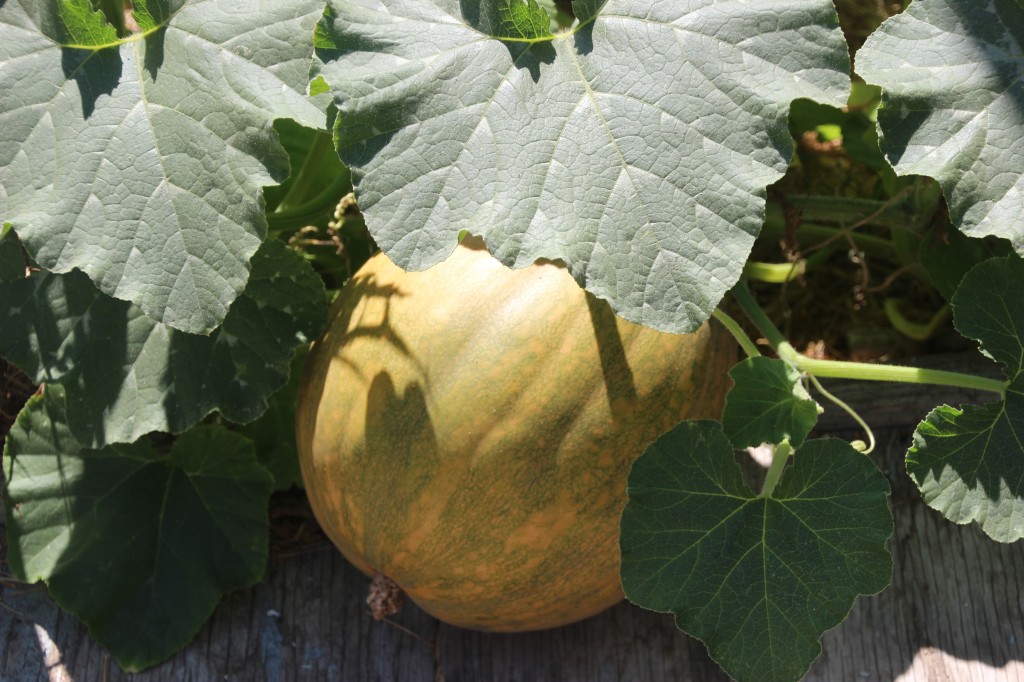 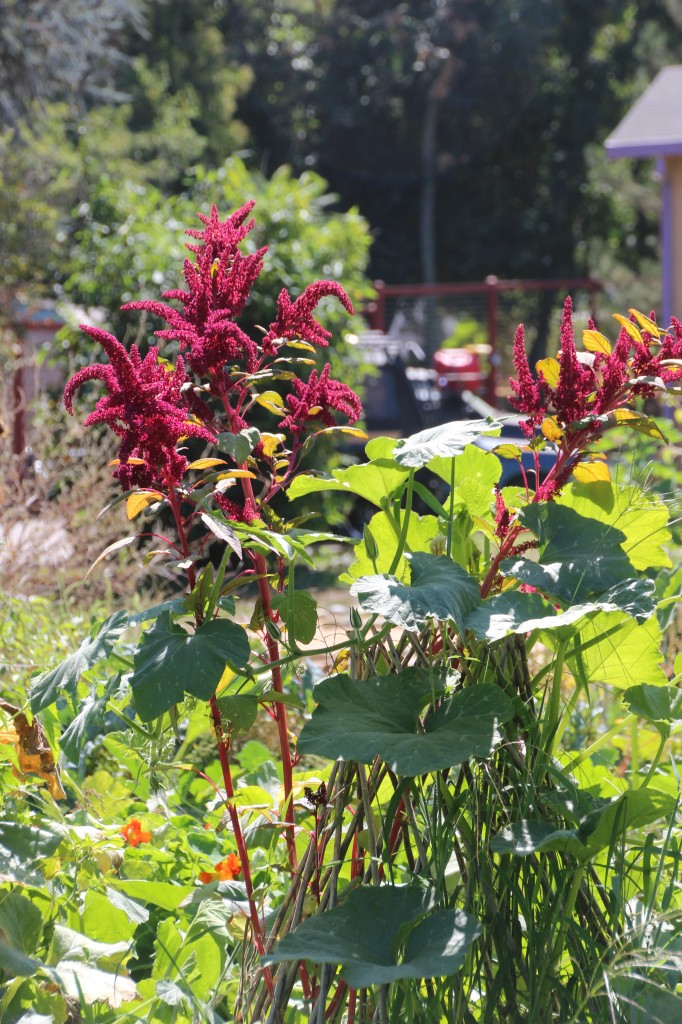