Nearly a week after seeing Chinese artist Ai Wei Wei’s installation @Large, located on Alcatraz Island, I am still overwhelmed by its depths, and struggling to find a way to write about it. It is a rich, thought-provoking, heart-touching exhibition. For something of this size and complexity, three strands have to come together: the vision, the craft and the collaboration. In @Large, these three shining strands braid together to form a powerful experience. 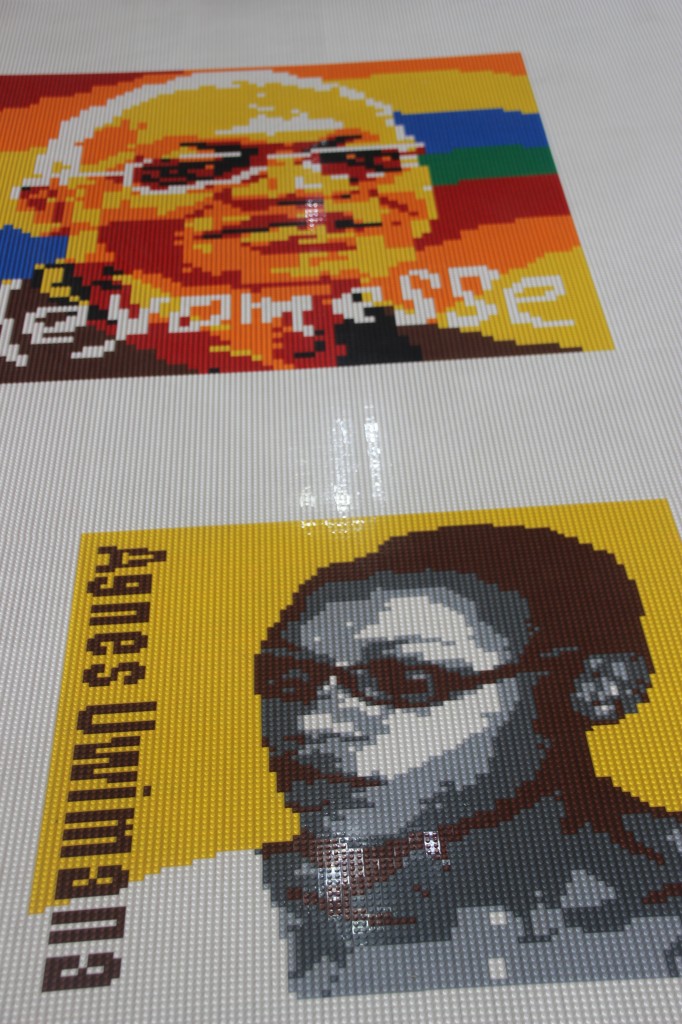 The installation is placed in three areas on Alcatraz; the New Industries on the northwest side of the island; the Cellhouse dining hall and infirmary; and Cell Block A, a block which is usually not open to the public. Each location has three art exhibits or pieces.

The Vision: Ai Wei Wei is a dissident artist whose passport has been revoked by the Chinese government, and who is under constant surveillance. Wei Wei has a fine grasp of the power of social media and his own importance as a globally-recognized artist. He uses this to play a tightrope-walking game with his government; a brinksmanship that he has to know he won’t win, but is dragging out as long as he can.

He accepted a commission to do an installation in a prison. It is no surprise that he chose Freedom as his theme. The installation works with various levels of freedom. Wei Wei’s vision is perfect for the location, which is amazing since he could not be there to oversee the installation and will probably never see it in situ.

The other part of his vision is lies in use of unusual materials to make a point. Wei Wei uses conventional Chinese dragon kites in part of the exhibit, and he also has 175 portraits of people who has suffered political oppression (many of them still imprisoned) in Legos blocks.

The craft: Portraits done in Legos could be silly if they weren’t done correctly. These are done correctly, ranging from some that are expressionistic (it’s possible there isn’t a good photo of the person, or that the person doesn’t want their portrait public) to ones that are realistic enough that I think I would recognize the person if I saw them on CNN. The dragon kite that comprises On the Wind is beautifully dyed, with statements from various political prisoners on the disks. The long pinions of the dragon wings in Refractions are perfectly shaped and proportioned.

The collaboration: I am always skeptical of artistic collaboration unless they are by writers, who usually seem to know how to do it. For visual arts, they often implode into a seething soup of egos. Wei Wei’s exhibit requires layers of collaboration; the 10 international artists who helped him assemble the works; the functional and fiscal collaboration between the artist, the For-site Foundation, the California State Parks Foundations, and the Park Services; the collaboration of the artists here in California (some of them are the same) who re-assembled the work on Alcatraz.

If any one of these strands had frayed or broken, you would have an installation of far greater power. The real risk is that this would have looked interesting but amateurish. It is anything but. It gets into your mind and heart and stays there.

When Alcatraz was still a prison, this was a two-story building where the prisoners worked. It’s made up of long rooms, with wired windows that face the mouth of the San Francisco Bay on the west. This seems like a kind of taunting; showing the prisoners a vista of open-ended freedom that most of them would never have again. 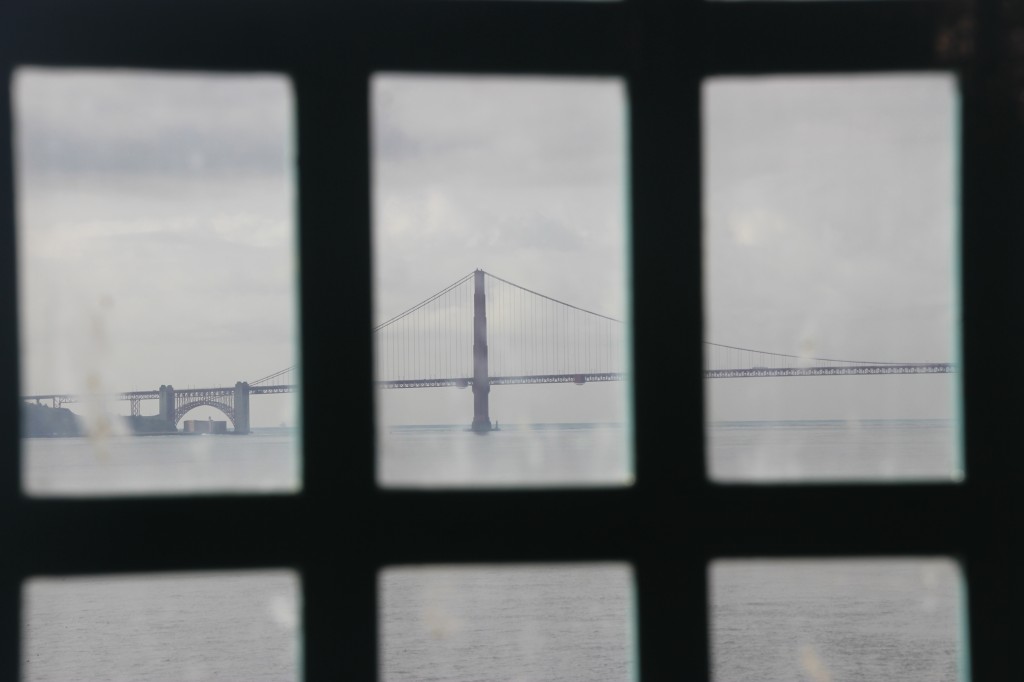 The first long room held On the Wind, a fabric art display dominated by the dragon kite. Wei Wei says for him the dragon does not represent the Emperor (the traditional Chinese representation); it represents the people. 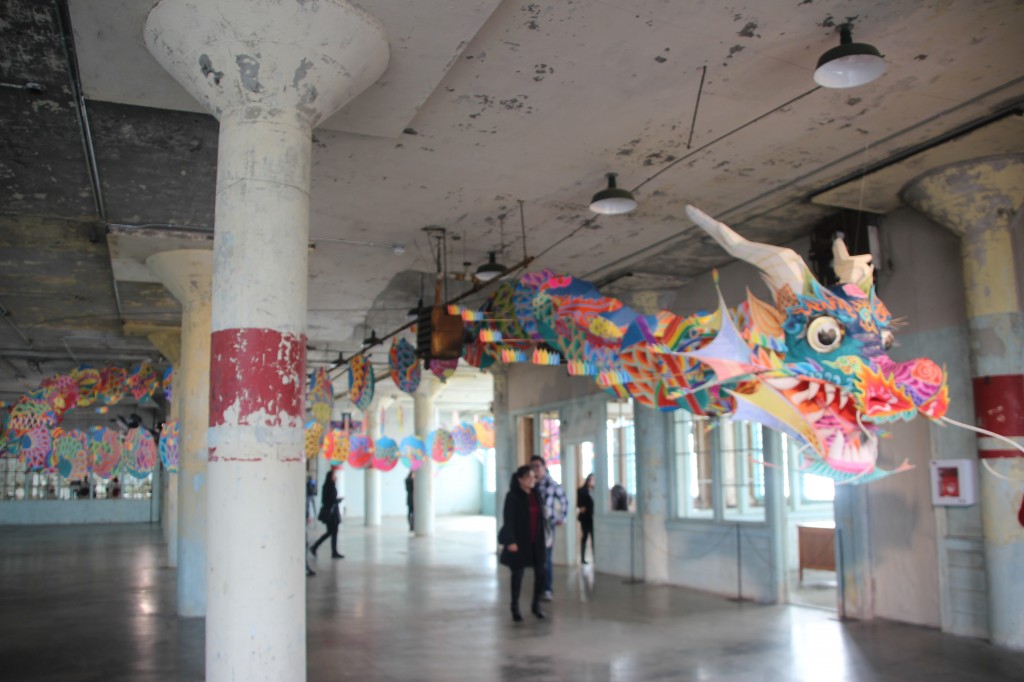 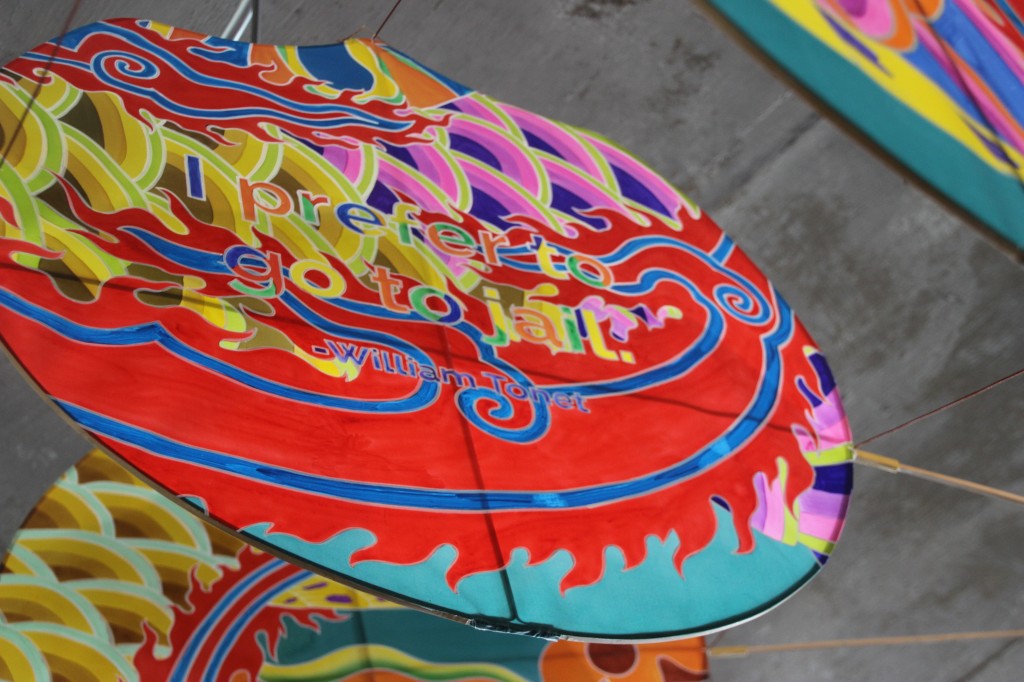 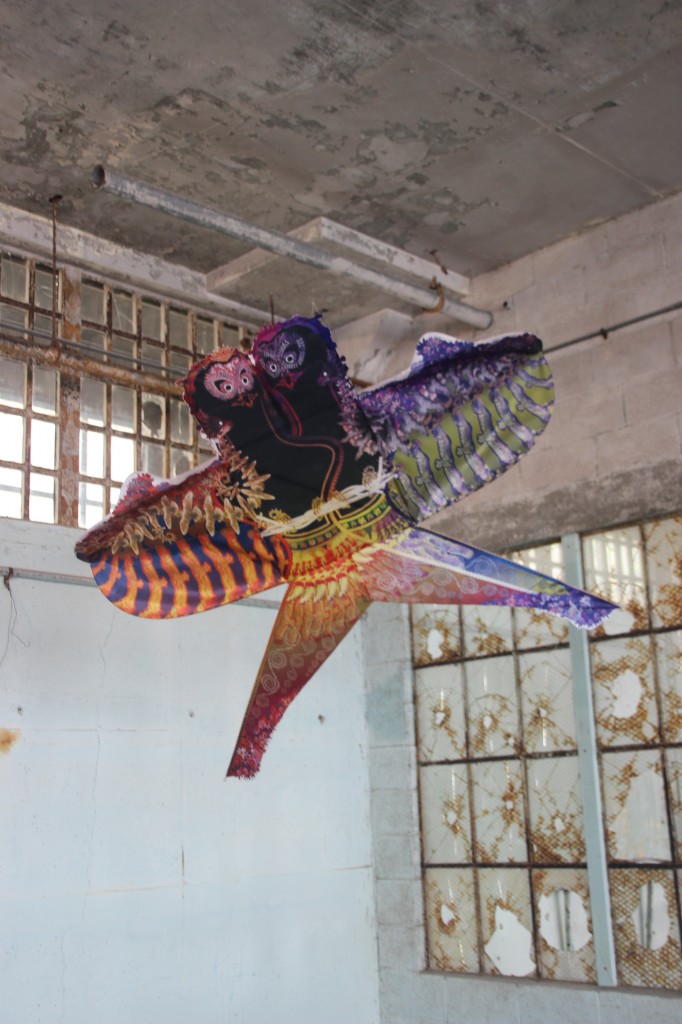 In the second long room you find Traces, a room with what looks, at first glance, like stretches of carpet. They aren’t carpet; they are zones of Legos portraits. File books set up around the room lets us read the stories behind the faces and the names. 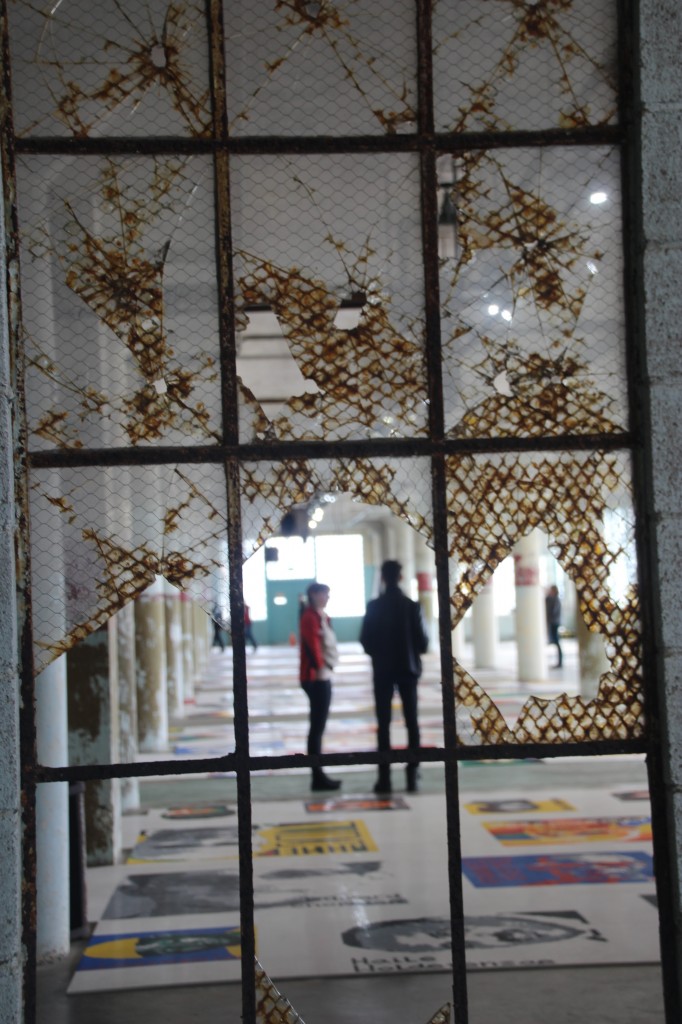 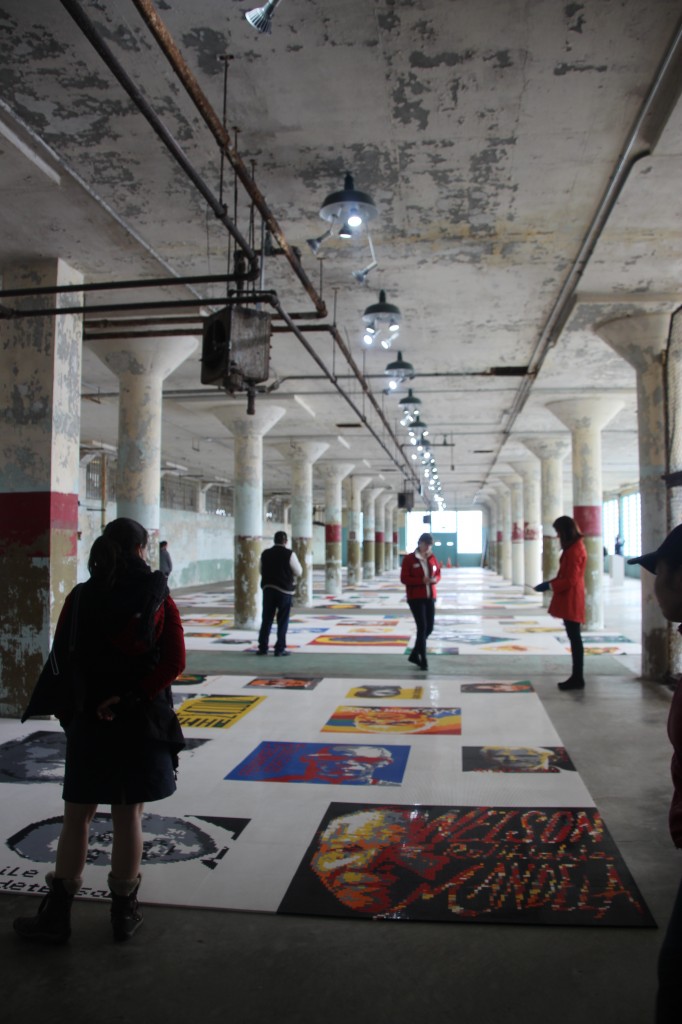 Refraction, the third part of the New Industries exhibit, is downstairs, viewed through a narrow gallery. You peer through small squares of broken glass at the spine and wing of a dragon, or a large bird. The blades of the wings are made from a refractive metal used for solar heating in Tibet; many people use solar heat to cook with, and on the ends of the pinions the viewer sees kettles, teapots, and skillets. At first glance this is a delightful piece with no real political message, until you remember that this piece is all about Tibet. 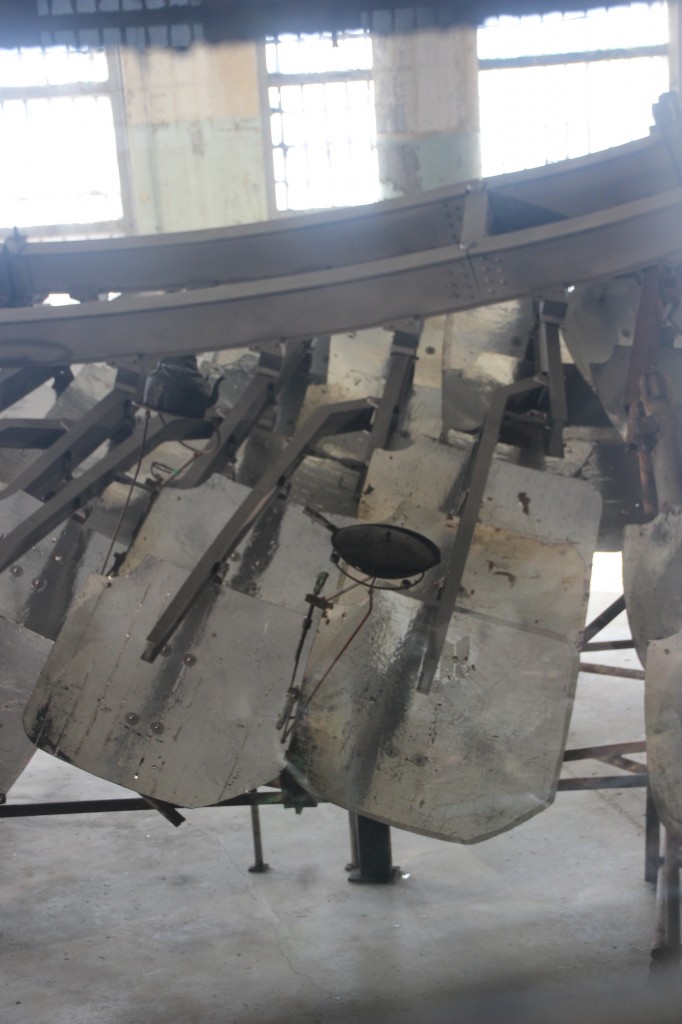 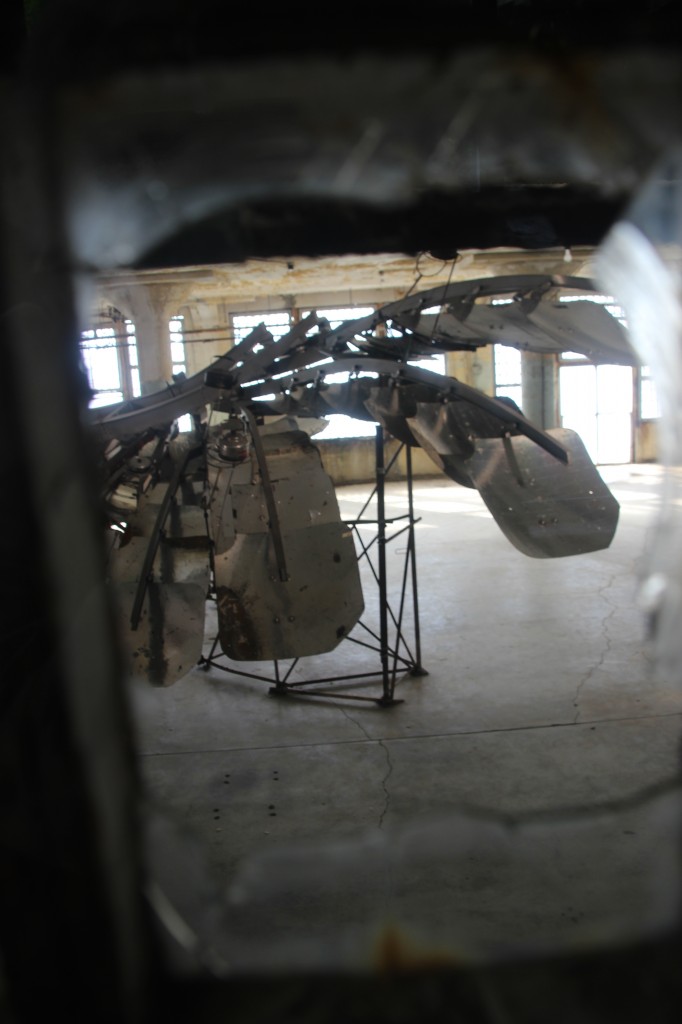 I was frustrated that I could only see bits of this powerful creation through such a thick barrier, with only a few chinks to let me catch glimpses of the thing, not the whole. And then I got it. It’s about Tibet.

The decay and oppression of the building; the narrow gallery, the steep stairs, the isolated location, do not let you forget that you are in a prison. That reminder gets stronger in the next two parts of @Large.