Bars and the Human Spirit; in the Cellhouse at Ai Wei Wei @Large

The next two locations for Wei Wei’s installation were in the cellhouse, which is at the top of Alcatraz. It seems like an odd place to house prisoners, since the few windows there  boast stunning views of the city and the east bay, but of course the prisoners didn’t have windows. The cell house was built where the fort had originally been. 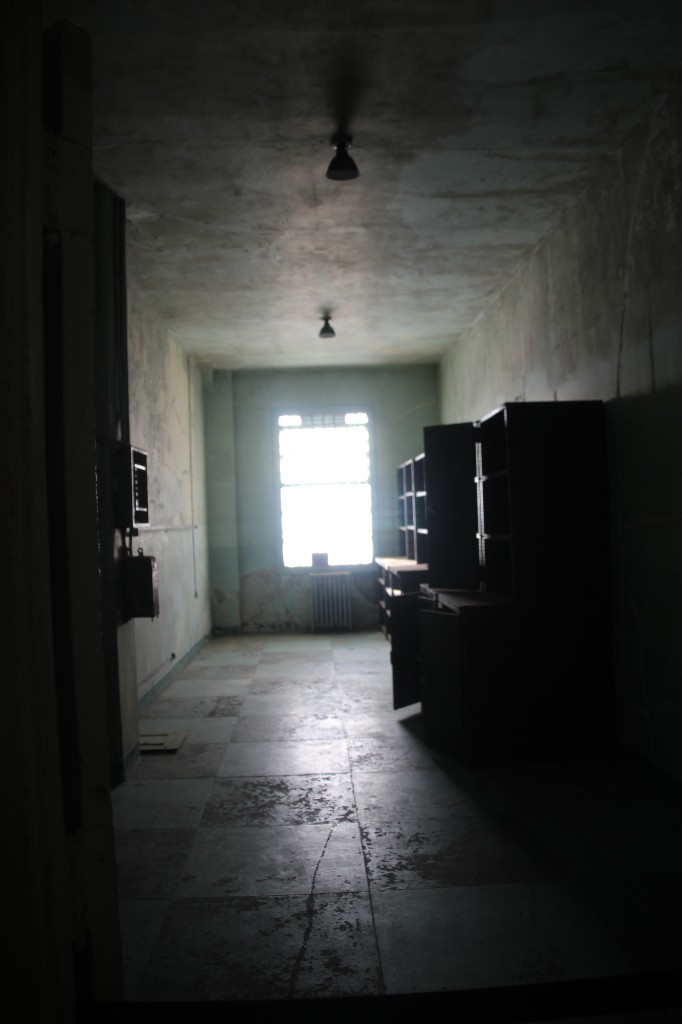 Enlightenment and Blossoms both were housed in the infirmary and in the mess hall. It was a little hard to find. There were lots of docents for the show, but for some reason it was hard to track one down at first for this part of the exhibit. We took the flight of stairs up to the second story and found two large banners describing the installation. “Enlightenment” featured chanting and sound from a Tibetan festival, and from a Hopi ceremony. The sounds were played in the prison’s two psychiatric cells, which are next to each other. The cells are walled with porcelain tiles. They aren’t padded. It was instantly obvious that the concern was less with preventing self harm and more with the ability to mop up quickly for when the cell was needed again.

This part of the installation failed for me. The Hopi chant was wonderful, but the close proximity of the cells meant that the Tibetan instruments bled through and overpowered it. I understood the exercise intellectually (or I think I did; “mental institutions” being one way dissidents are  controlled in cultures) but it didn’t resonate; or maybe it resonated too well, literally.

I talked about the importance of collaboration; this looks like a failure of logistics. The concept of having those sounds in those two cells was excellent; it probably looked great on Skype; unless you were there you couldn’t tell there would be bleed-through. 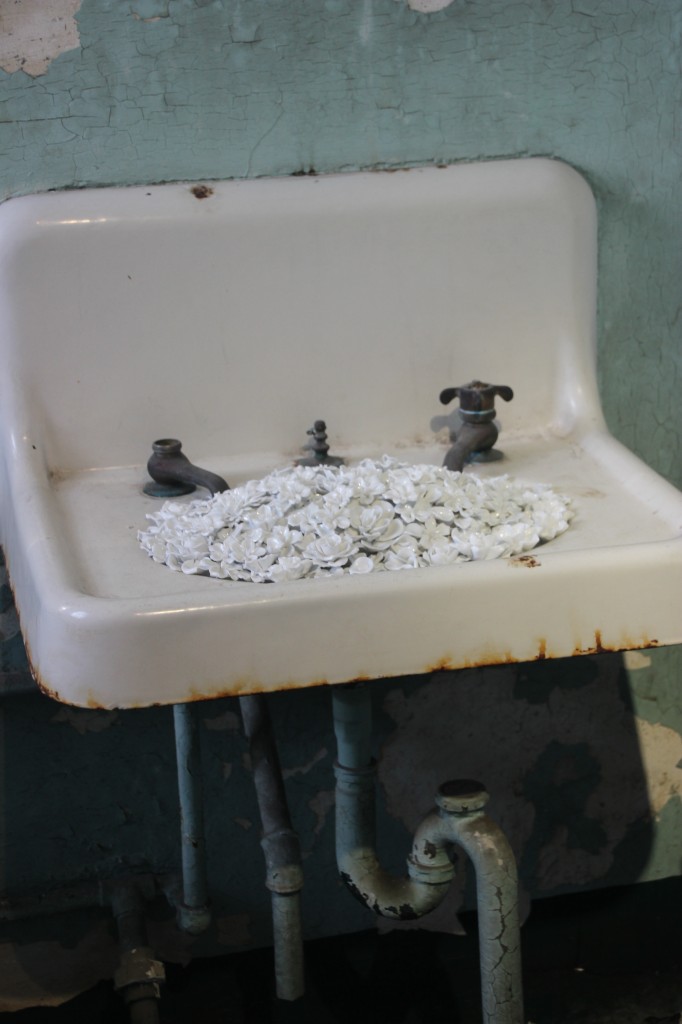 We wandered around the infirmary and didn’t see much else, except for a couple of rooms/cells that were roped off. I wondered who the joker was who had filled the toilet in one with polystyrene peanuts. Linda came back after reading the banners and said there were supposed to be thousands of porcelain flowers growing out of the fittings in the cell. Armed with that knowledge we took a closer look and realized that they weren’t peanuts, they were flowers. Up closer, this effect worked better, but overall, the hospital portion of the installation was less than satisfactory. 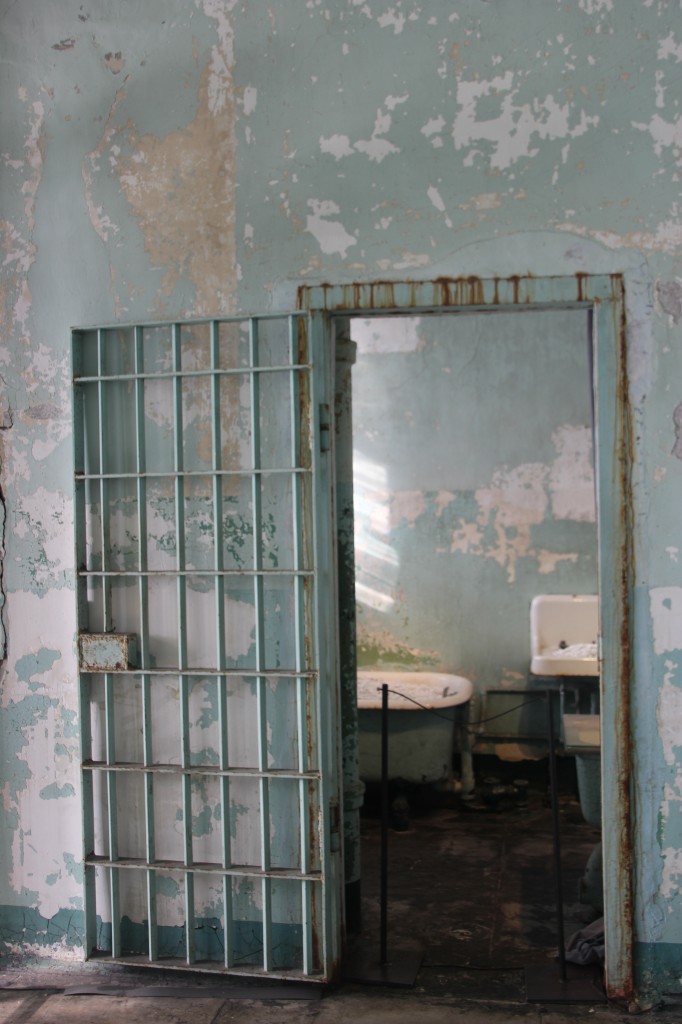 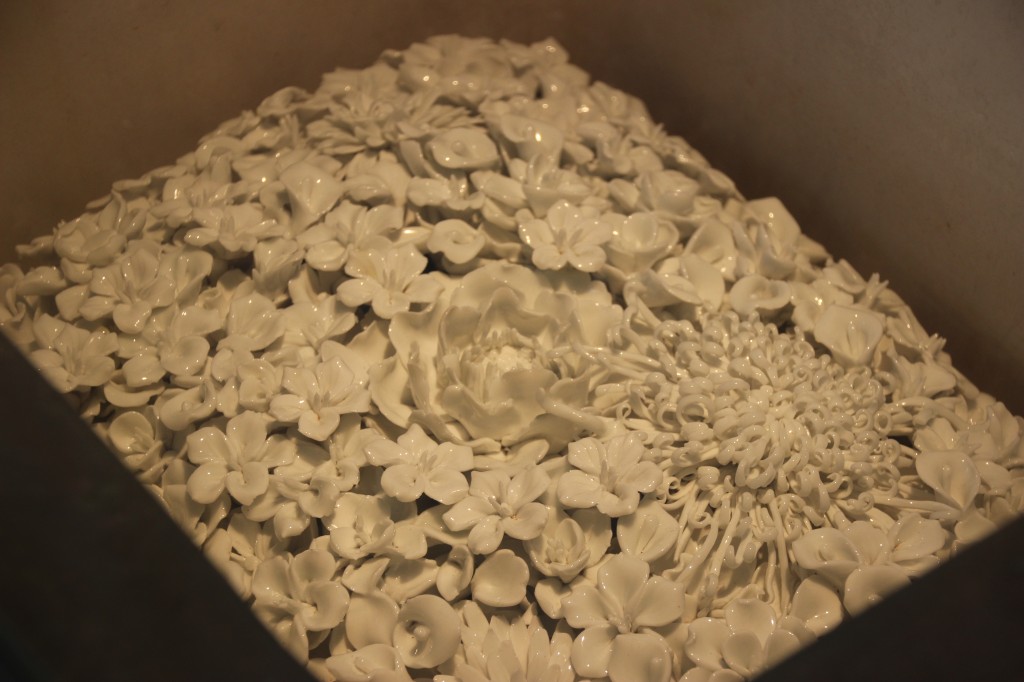 In the mess hall, the docents and volunteers had racks of post cards addressed to the prisoners who had been depicted in Traces. They encouraged us to take a minute to write a message of hope to them. This is the interactive section of the piece, and this worked well. For a moment, after confronting the echoing music in the cells, seeing the rotting walls, and imagining hope and human spirit growing like fragile flowers out of a prison toilet, I really did feel a connection with these people who have done nothing more than ask for equality, fairness and honesty.