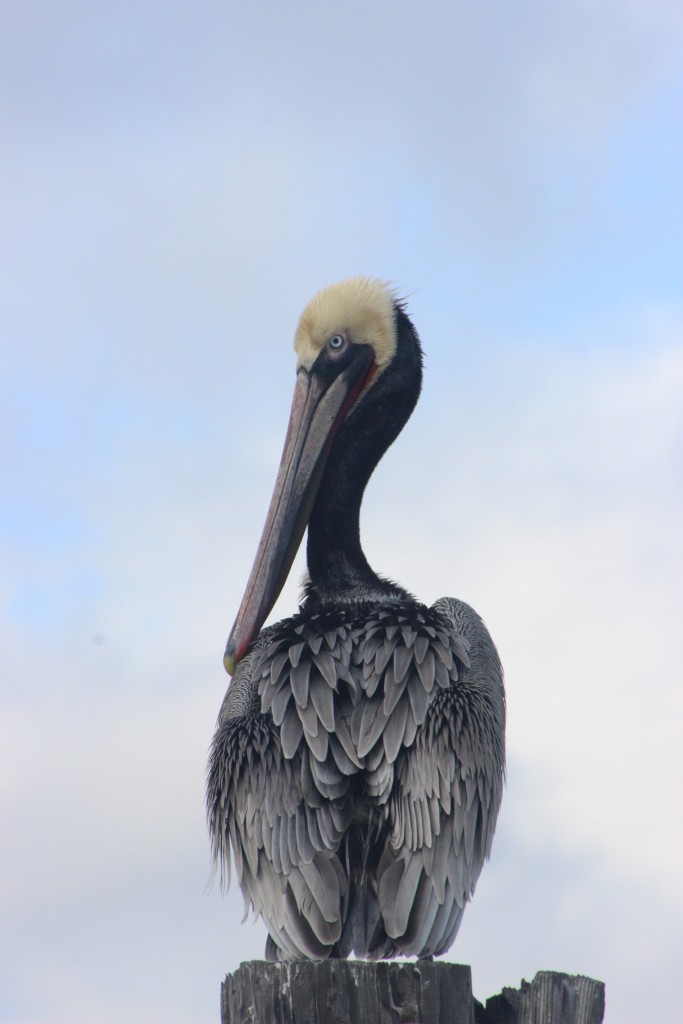 We had lunch at the Lighthouse Cafe — more accurately, we had breakfast about 1:30, sitting at the counter of this tiny, packed diner, watching while the cooks made scrumptious food. The Ultimate Breakfast includes eggs, sausage or bacon, hash browns or home fries, and a pancake that covers the whole plate. Mine was studded with fresh, juicy blueberries. 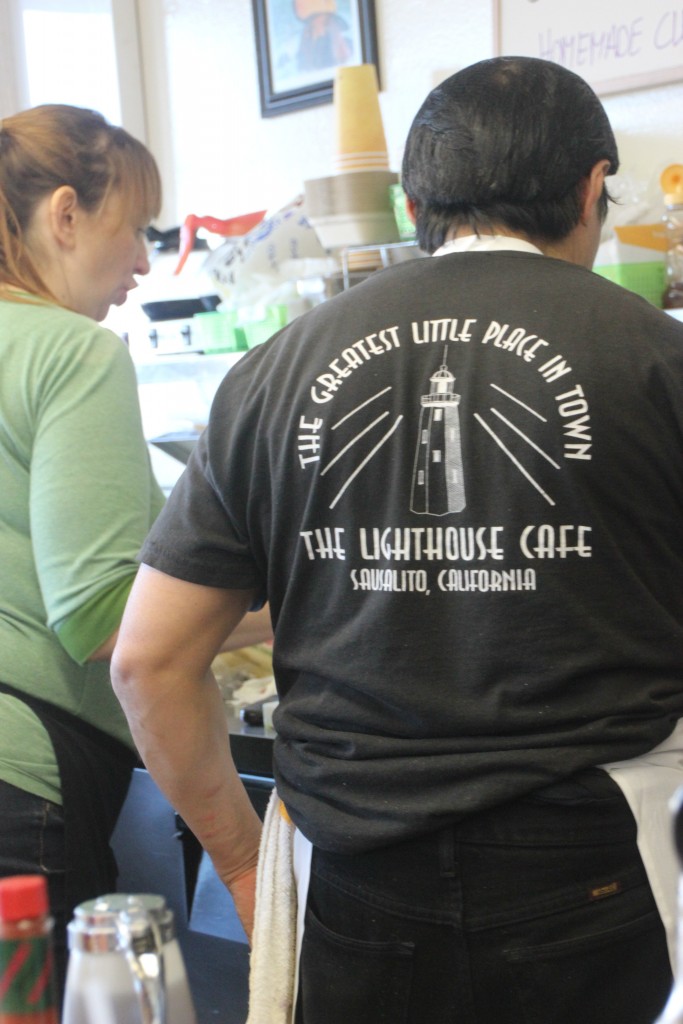 The woman in green to the left of the cook was our pleasant server. 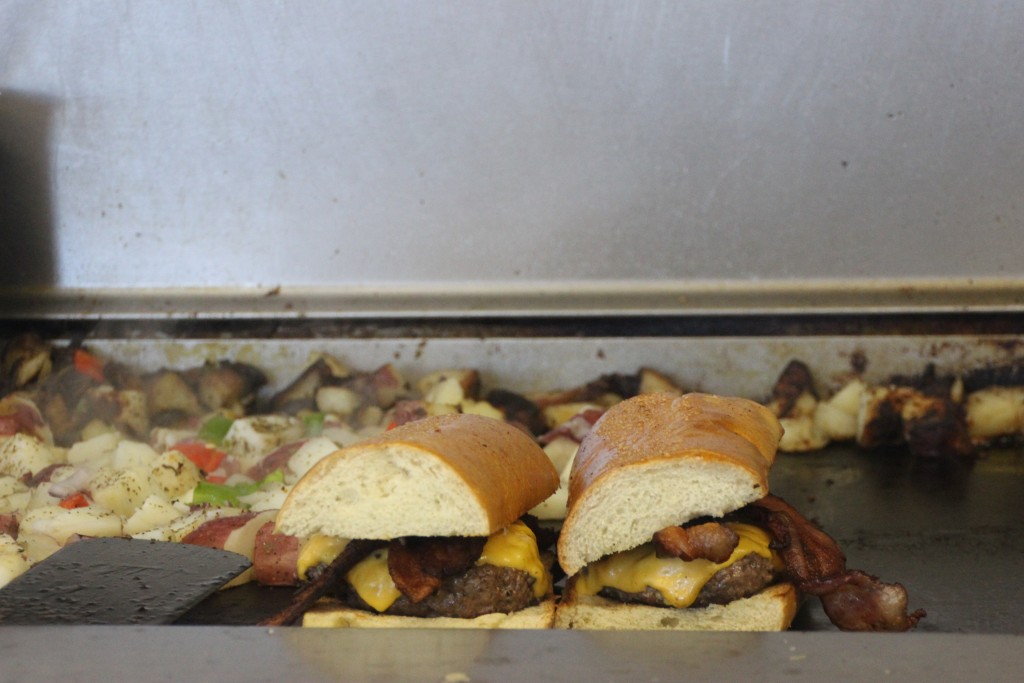 We didn’t order the bacon cheeseburgers, but that’s what they look like.

The Lighthouse Cafe doesn’t take reservations and it is small — maybe six booths and ten seats at the counter. In addition to a regular breakfast and lunch menu; sandwiches, burgers, etc, it also features a Danish section. I know, right? We went for the classic and we were not disappointed. 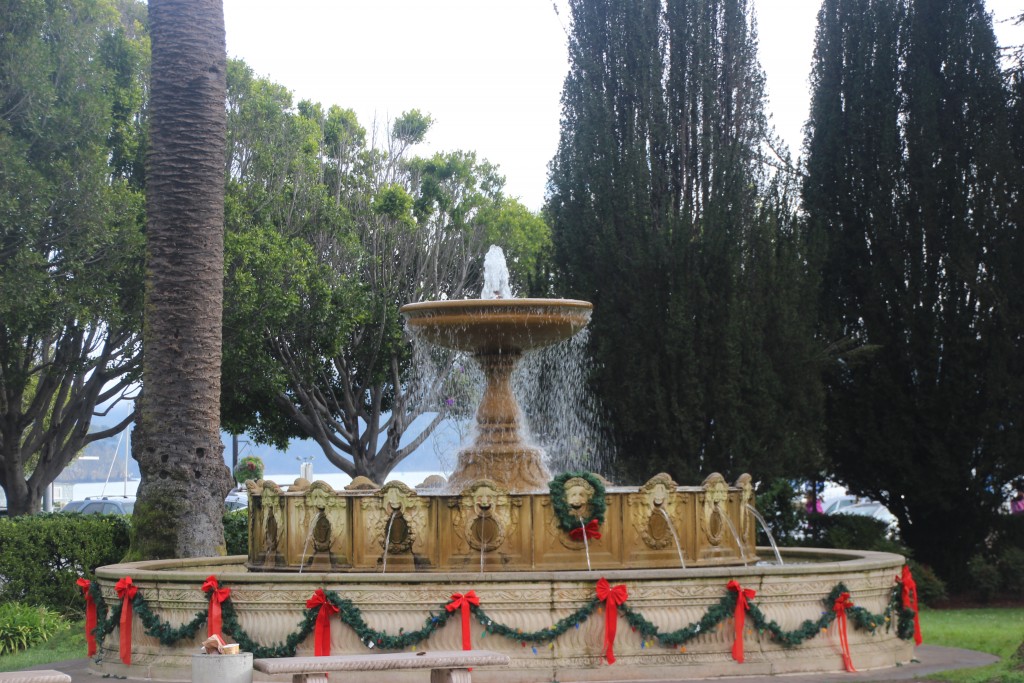 The fountain in Del Mar Park

This is after we drove down Highway 101, almost to the Golden Gate Bridge, and took the last exit before the bridge. It winds down to the town of Sausalito, or you can curve left and visit the Marin Headlands, with its lighthouse, it’s stunning view of the mouth of the Golden Gate and the bridge, and during the flyover, hundreds of varieties of birds.

We didn’t do that, though. My goal was to get a sense of the town, particularly the area near the ferry landing, for a short story I was writing.

So, a few tips about visiting the sparkling little tourist town of Sausalito. 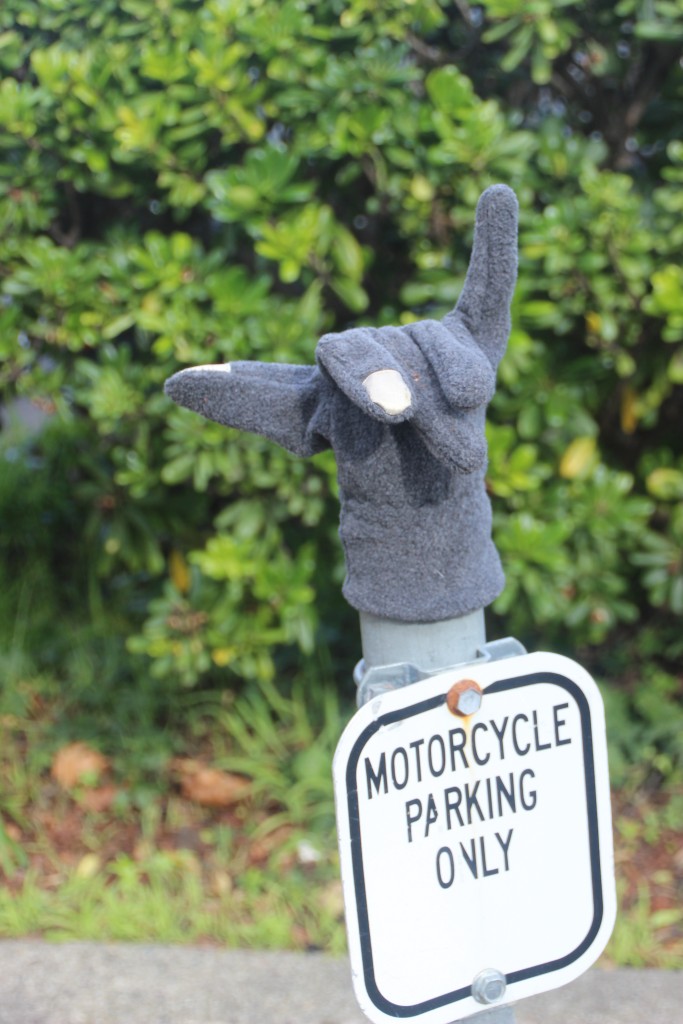 Parking: Expensive! Three dollars an hour. No, seriously. One hour’s parking now costs more than a gallon of gas in most parts of this state. If you are on Bridgeway Street, look around for some areas marked “Three hours free parking” and grab one. It will mean some walking, but walking’s the best way to see this picturesque waterfront anyway.

A couple of websites also helpfully point out that, although it isn’t advertised, the hourly rate is cheaper the farther you go from the ferry pier, so check out some of those lots. 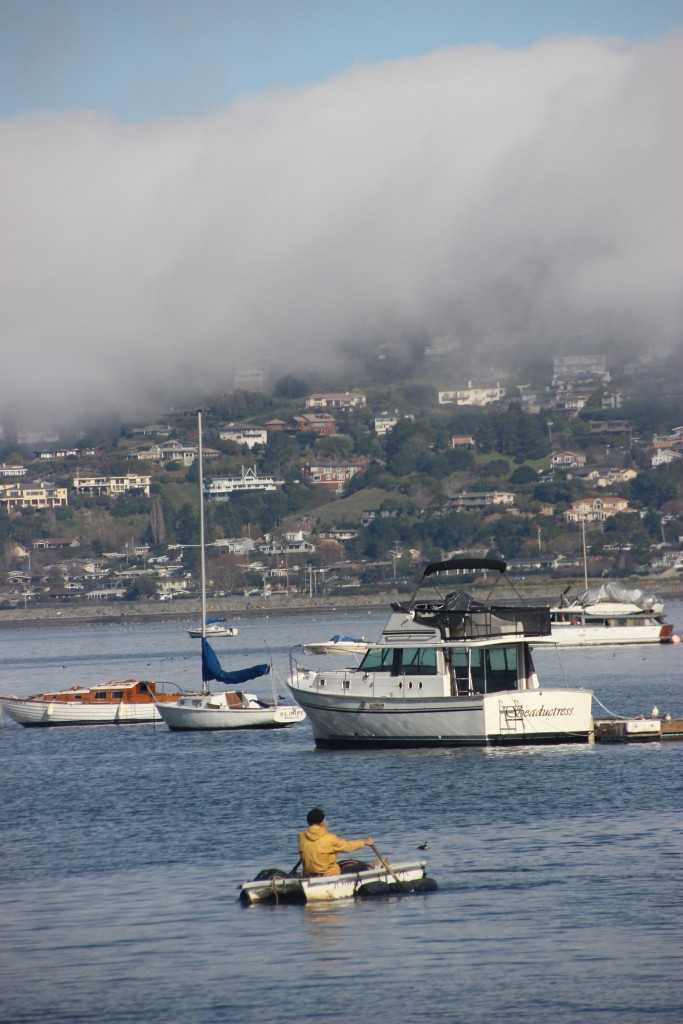 Views:  From the Ferry Terminal you have a view of the Tiburon penninsula and Angel Island, and, once the fog lifts, you might be able to see the Bay Bridge. We did. 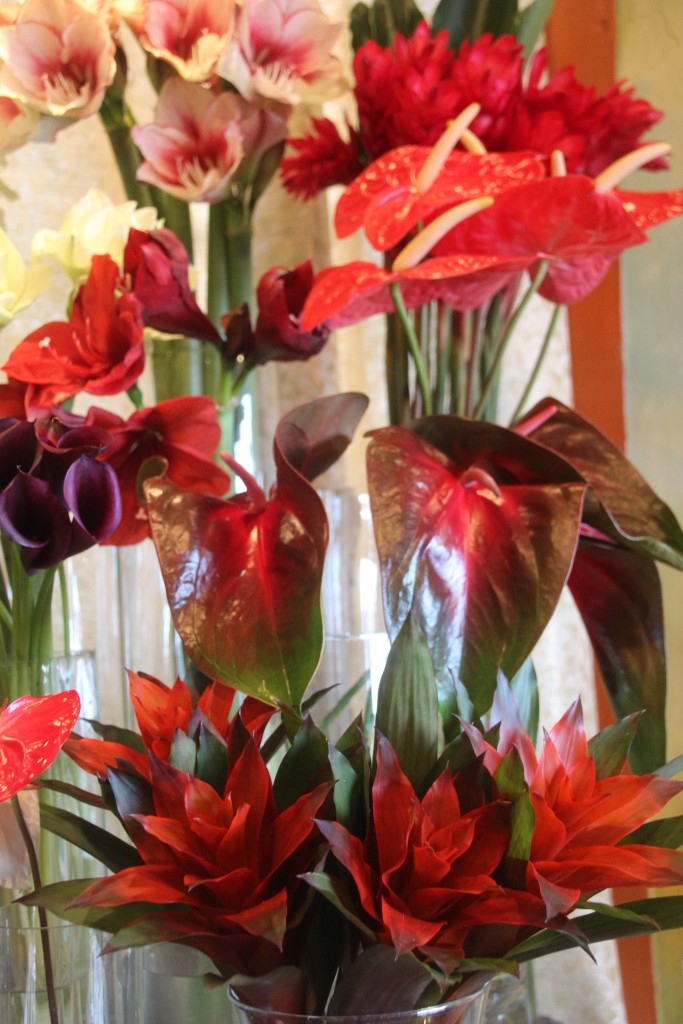 Ladybug Florist has a great selection of bromeliads and orchids

Tourist Shops:  Bridgeway Street is lined with galleries, high-end clothing shops and little tourist shops with toschkes and souvenirs. It boasts a couple of expensive restaurants and a couple of bars. I found a bicycle pin and Linda scored a frog figurine at one shop with imports, run by a friendly French woman who is probably a couple of years older than me.

Food: The Lighthouse Cafe; recommended! You can go upscale — very upscale, as in expensive, with the Spinnaker, the “grande dame” of Sausalito restaurants, which is right out on the point, or Le Garage, new and uber-trendy, or Bar Bocce, on the north end of Bridgeway. Poggio is right downtown across from the terminal. 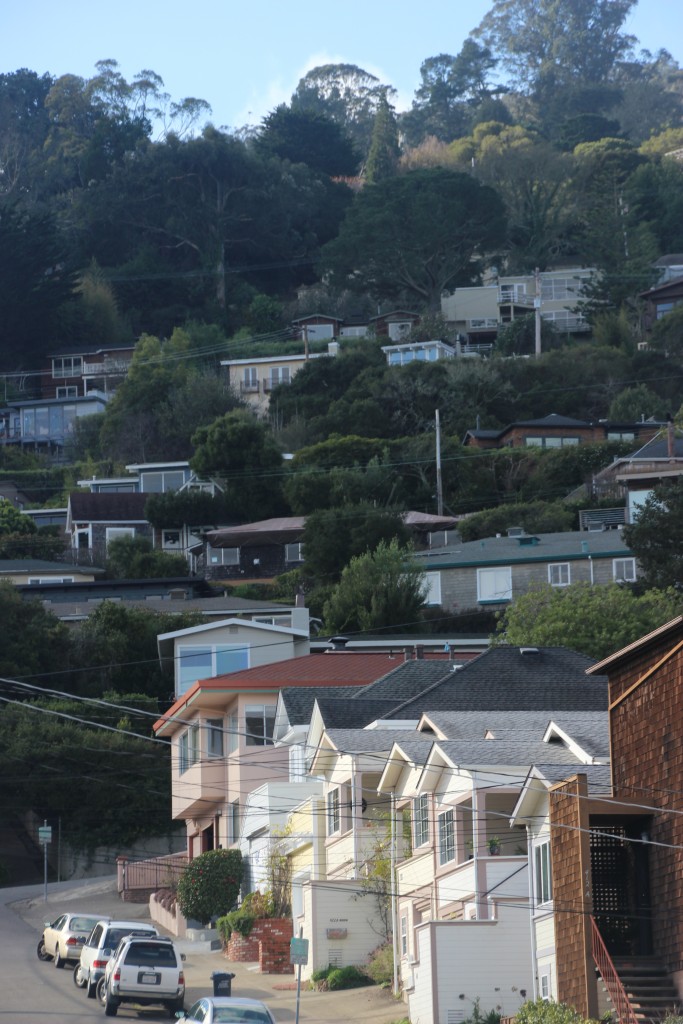 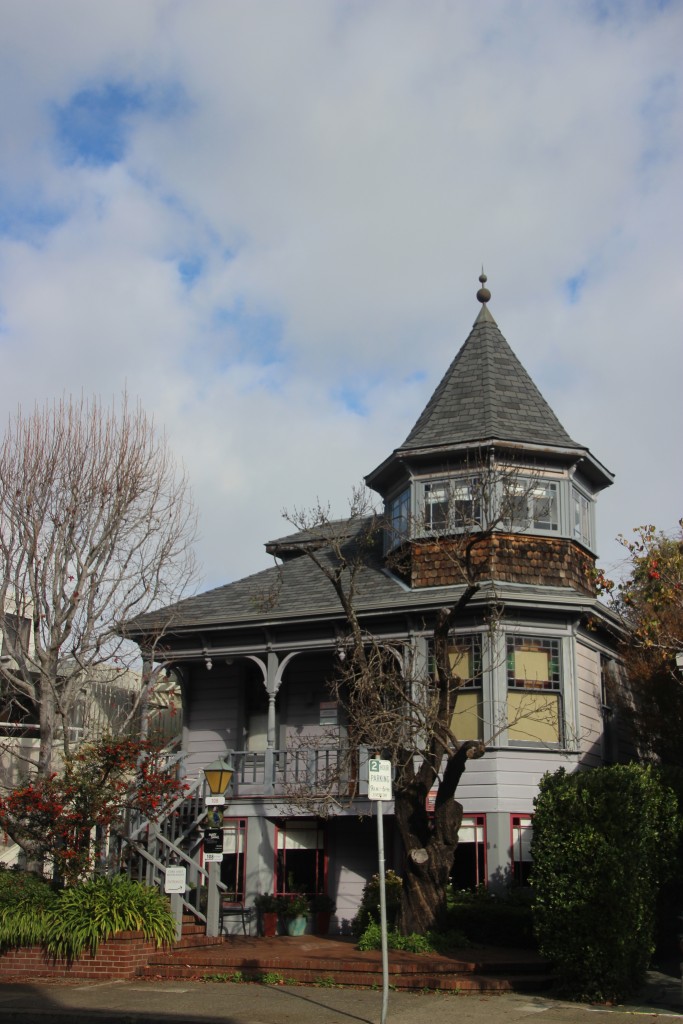 And just the house I was looking for.

Ambiance: Sausalito winds up the hills to the west of the waterfront, and about a block off the tourist drag you start seeing houses from the 1930s and earlier. I was looking for a particular style of house and I found it on Caledonia Street, which also houses a market, the police station and the fire station, and some other businesses. 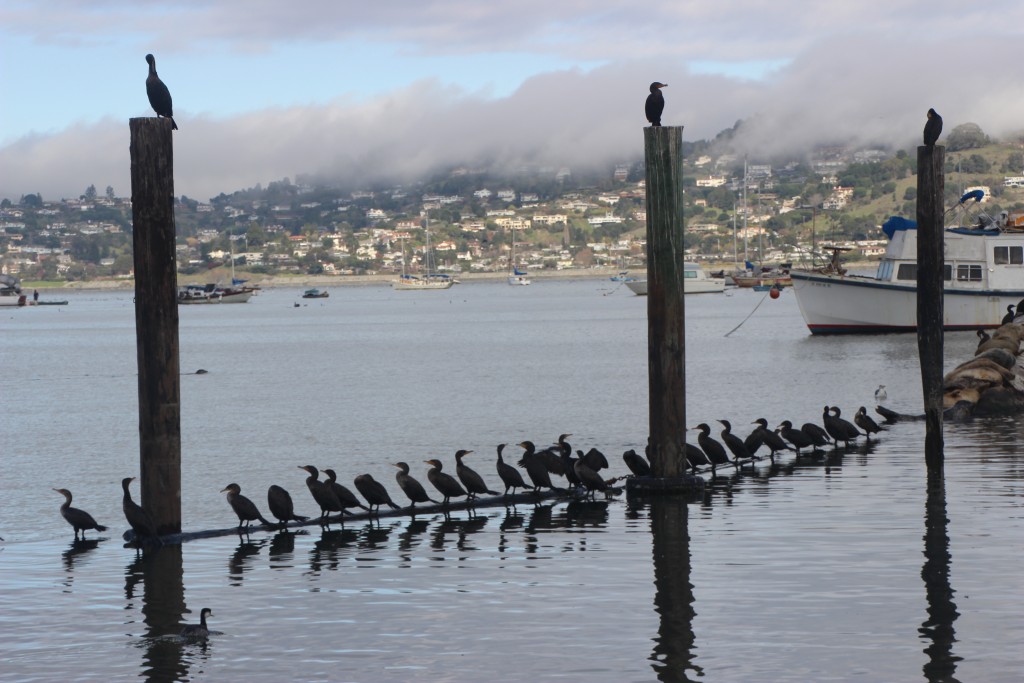 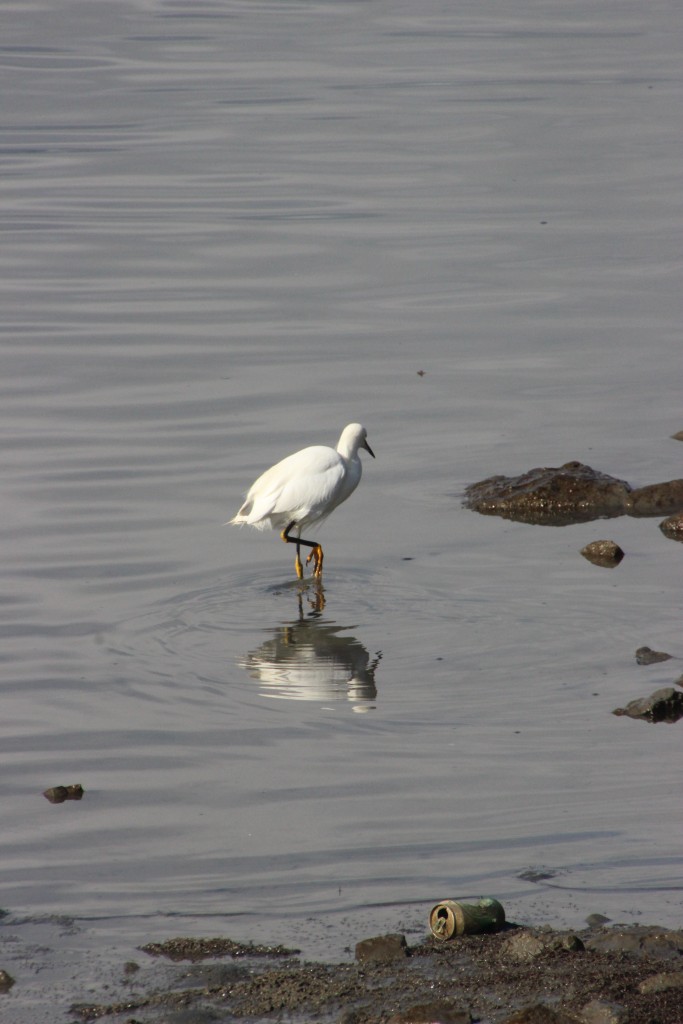 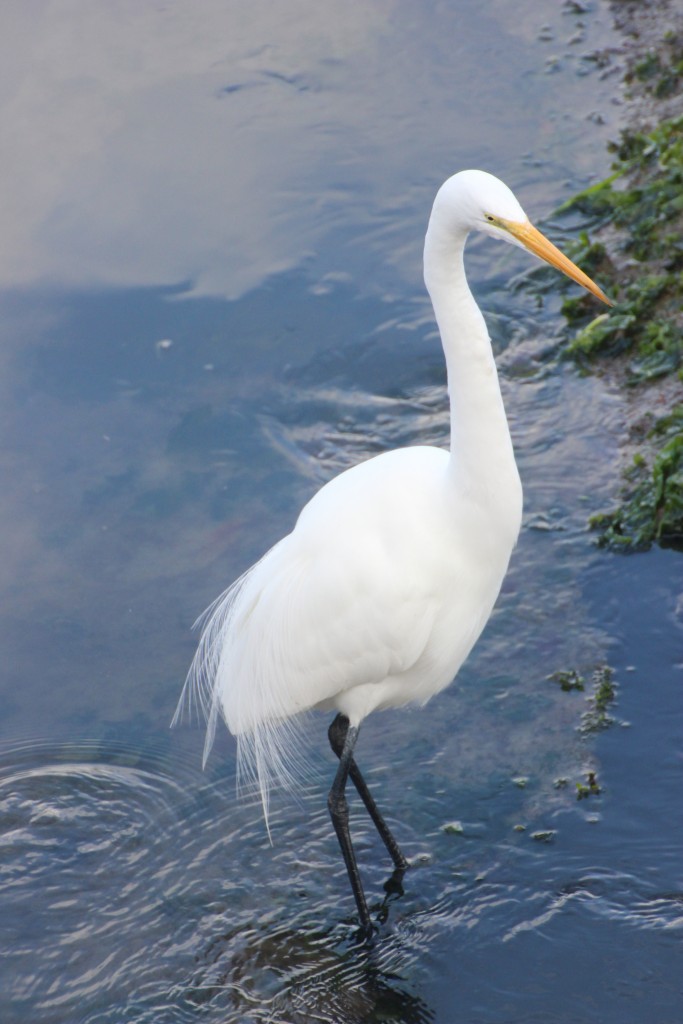 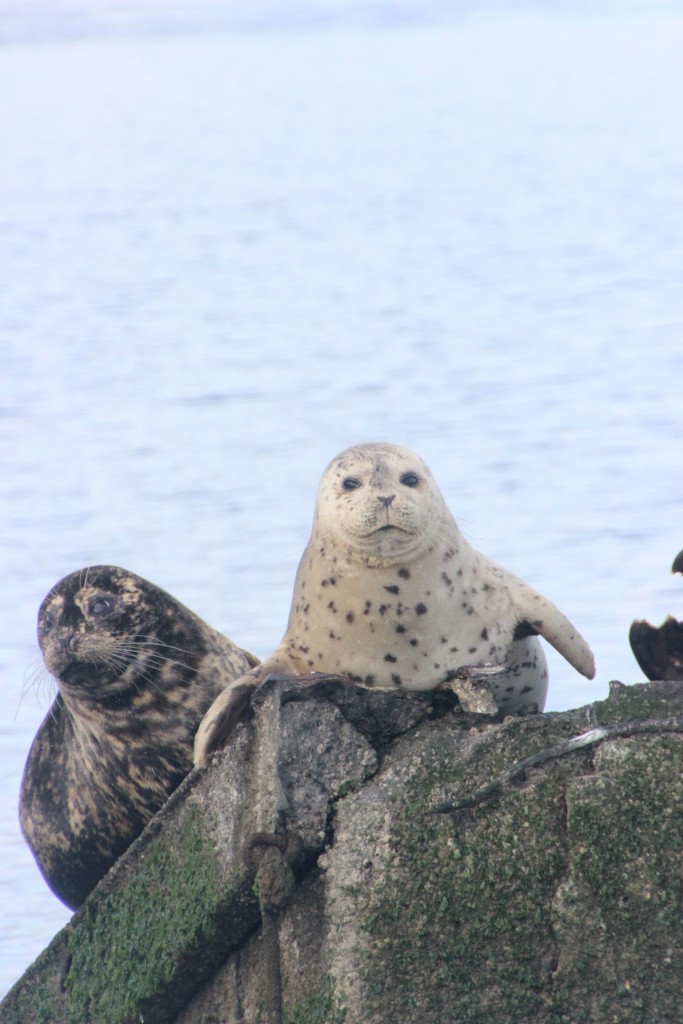 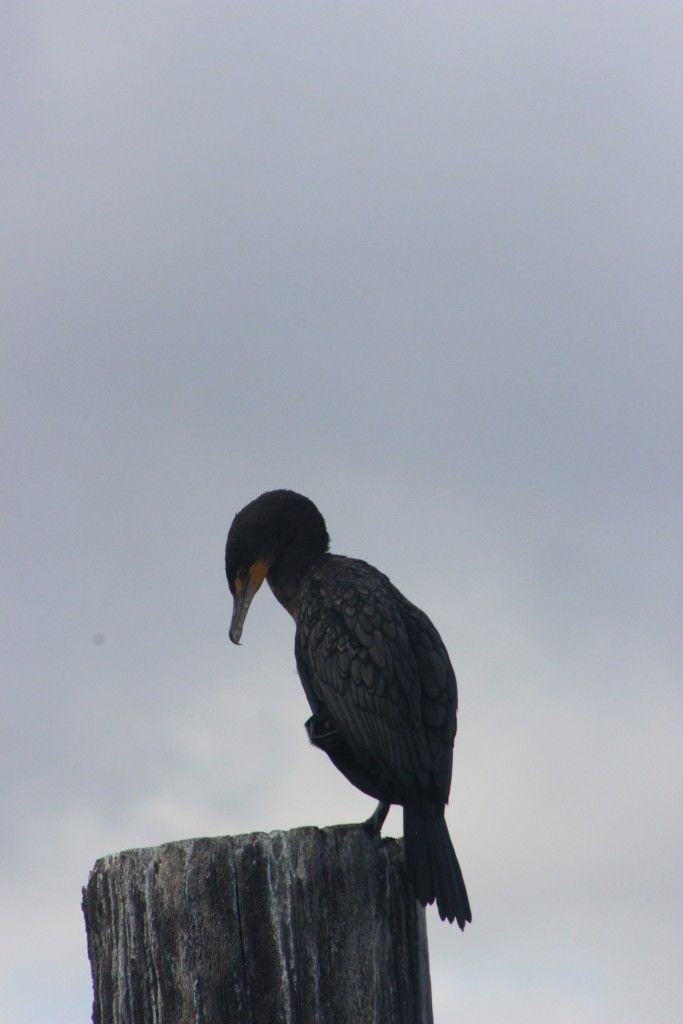 Marine Life: This was a bonus. I was there looking for the shape of the town, and, as I said, a house. As we were walking around a local who was dog-walking pointed out the walkways along the marina, directing us to the birds and harbor seals who make up the aquatic population of the town.

History: In 1838 an Englishman named William Richardson got a large chunk of land north of the Golden Gate in a Spanish land-grant. By the late 1860s he was broke, and sold most of his land to the Sausalito Land and Ferry Company (visionaries!) who plotted out a town and bought a small steamship, the Princess, to run potential buyers over from San Francisco.  In the first half of the 20th century, Sausalito was a transportation hub. It was a popular spot for bootleggers during Prohibition. When the Golden Gate Bridge was completed, ferry service was suspended and the town languished until world War II, when it became the home of a shipyard. After the end of the war it again slipped into relative obscurity until it was discovered by artists, writers and poets, who kept it thriving until ferry service started back up in the 1970s. I don’t have many details because the Visitor Center was closed the day we were there. The most intriguing part of the story is the town’s history during the Volstead Act. I’d love to find out more about that!

The town is a great place to go gallery walking, has good eats and most importantly, great photo opportunities!