The Bay Model; a Cool Thing 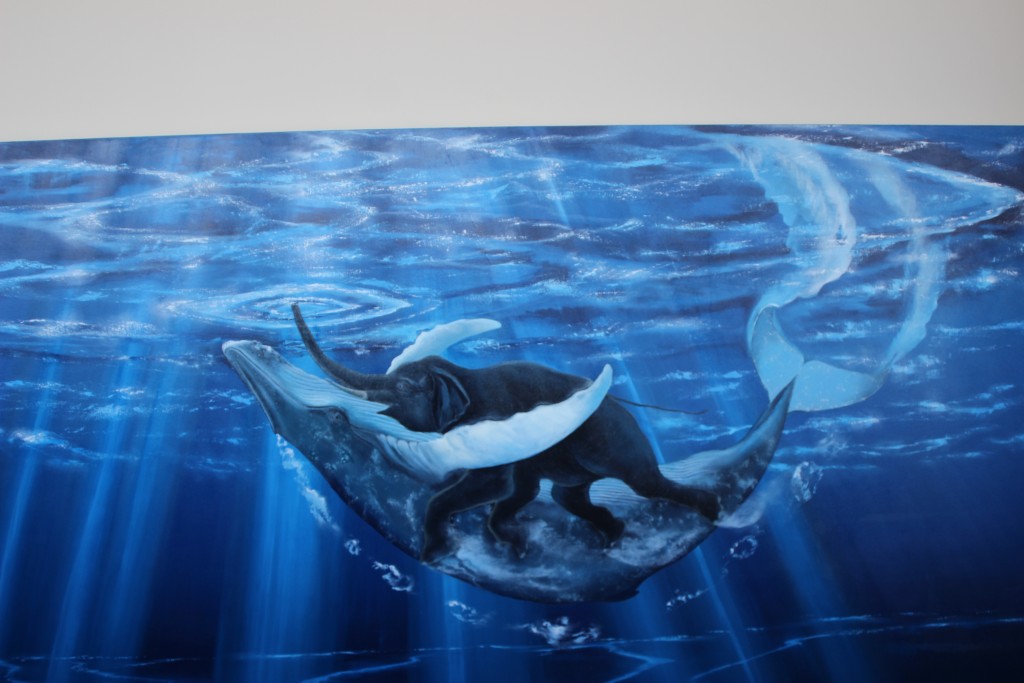 The San Francisco Bay Model isn’t a best-kept secret. I’m just ignorant. I knew there was a Bay Model somewhere in the area because I saw a film about it years ago on PBS, and because the Mythbusters used in an episode (the Escape from Alcatraz ep, I think). I never twigged to the fact that it was in Sausalito… basically, an hour from my house. 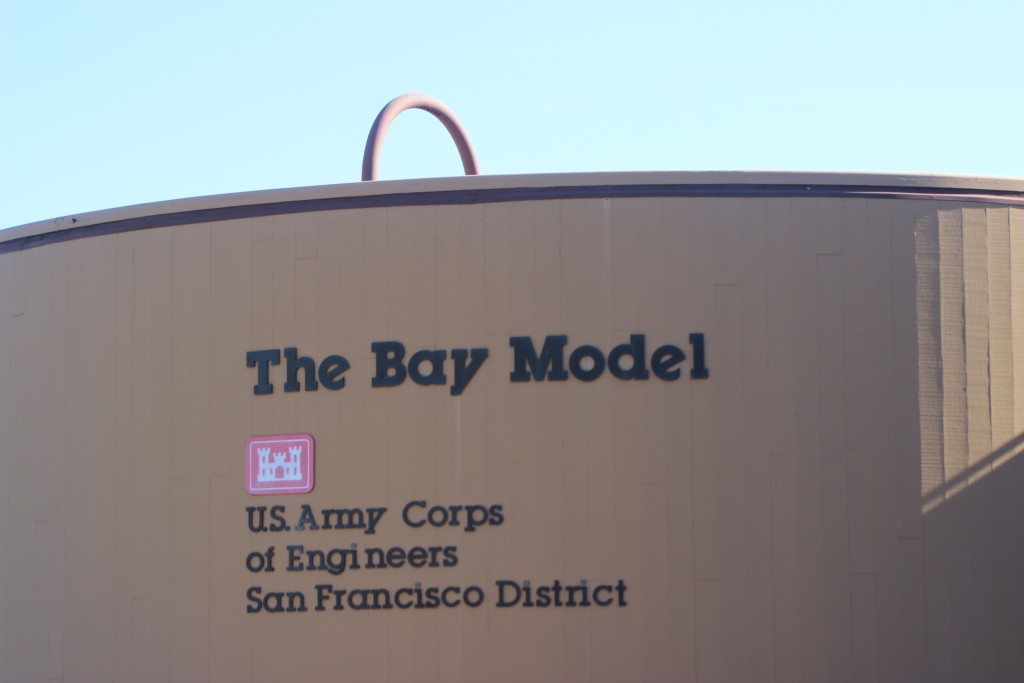 This model is astounding. It covers an acre and a half, a scale model of the San Francisco estuary and watershed encompassing the San Francisco Bay, San Pablo Bay, the South Bay and the San Joaquin/Sacramento River Delta. It was in regular use until 2000, and it was manual, not computerized. The Army Corps of Engineers built it, and it was used to test models and theories, to run simulations of “what-ifs;” “What if we filled in this part of the bay? What if we dammed this tributary? What if the Sacramento River flooded? What if we had drought years?” 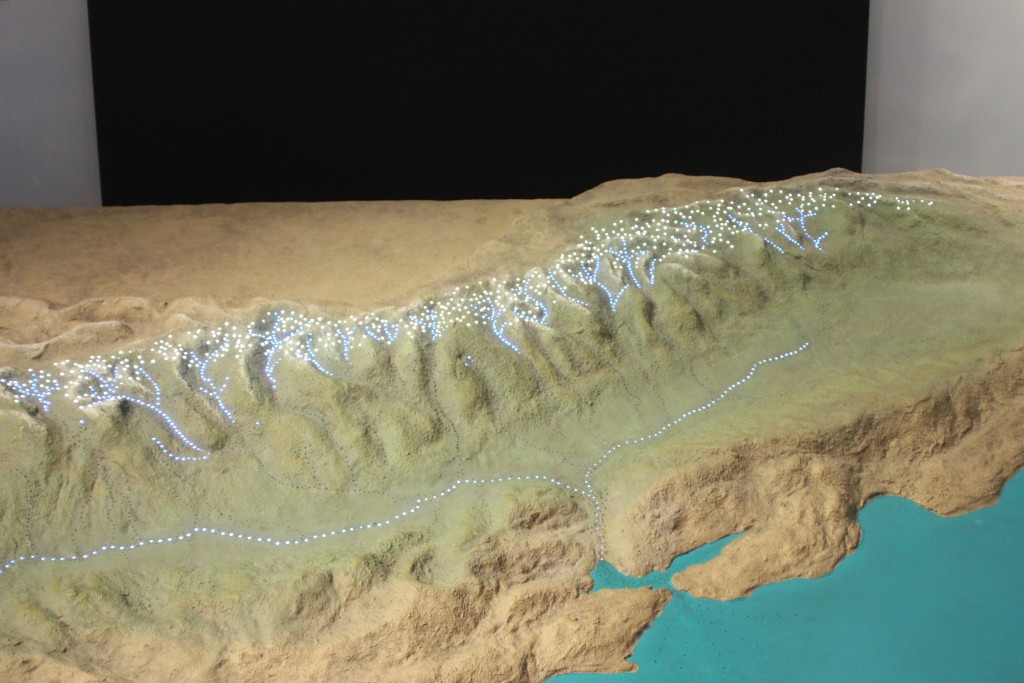 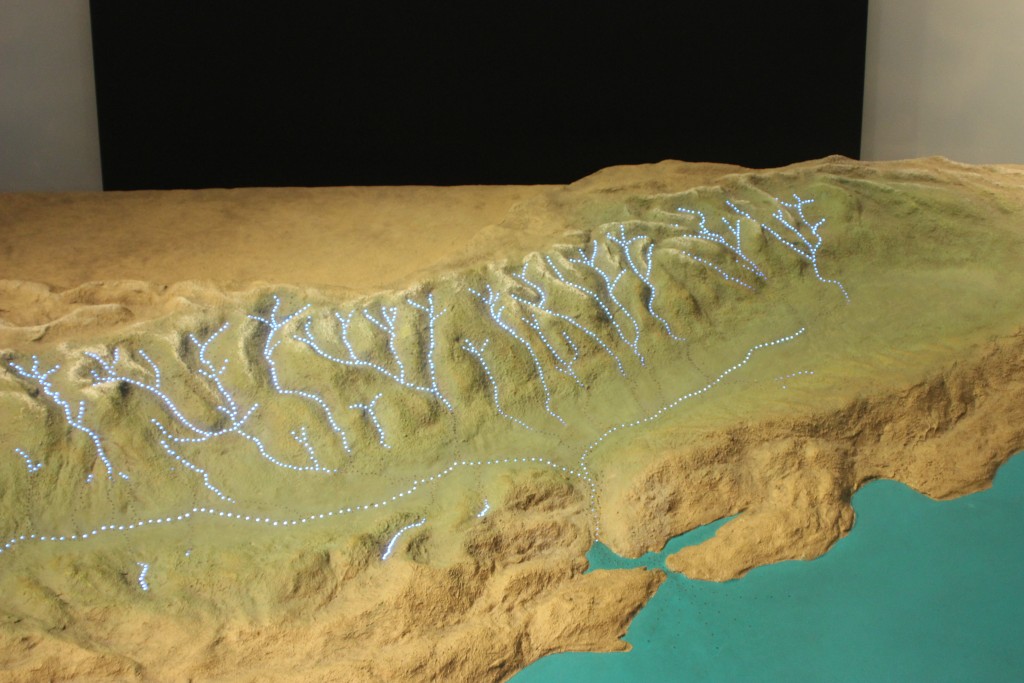 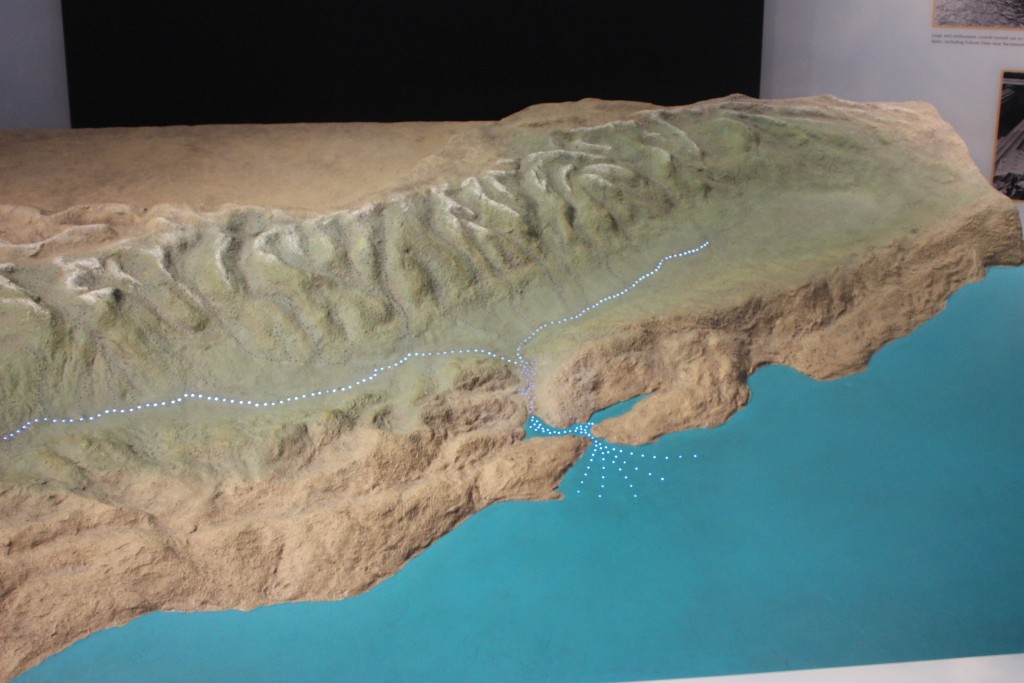 Through the estuary and into the Pacific ocean

Currently, the Bay Model exists as an educational center and museum. They’ve packed in a lot of information about snowmelt, estuaries and the purpose of estuaries, fisheries, and the history of the Army Corps of Engineers. Six or seven interactive exhibit share the ground floor with the Model, and a short tunnel leads you to the overlook, about a half story above the scale model waterway. 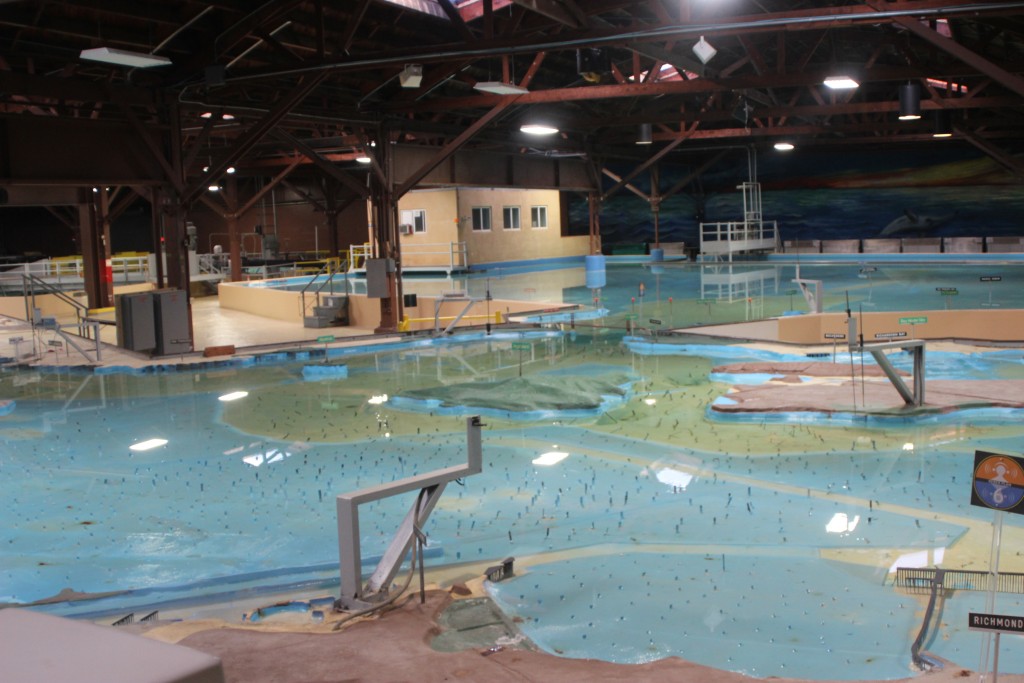 The Model is to scale as to size. It can’t be to scale for depth. Parts of the bay are so shallow that if the depth were to scale there wouldn’t be enough water in the model to measure. The simulations adjust for that by using the copper pylons that stick up. They use electrical resistance to adjust the currents and flows to match what the proper depth of the water would be. 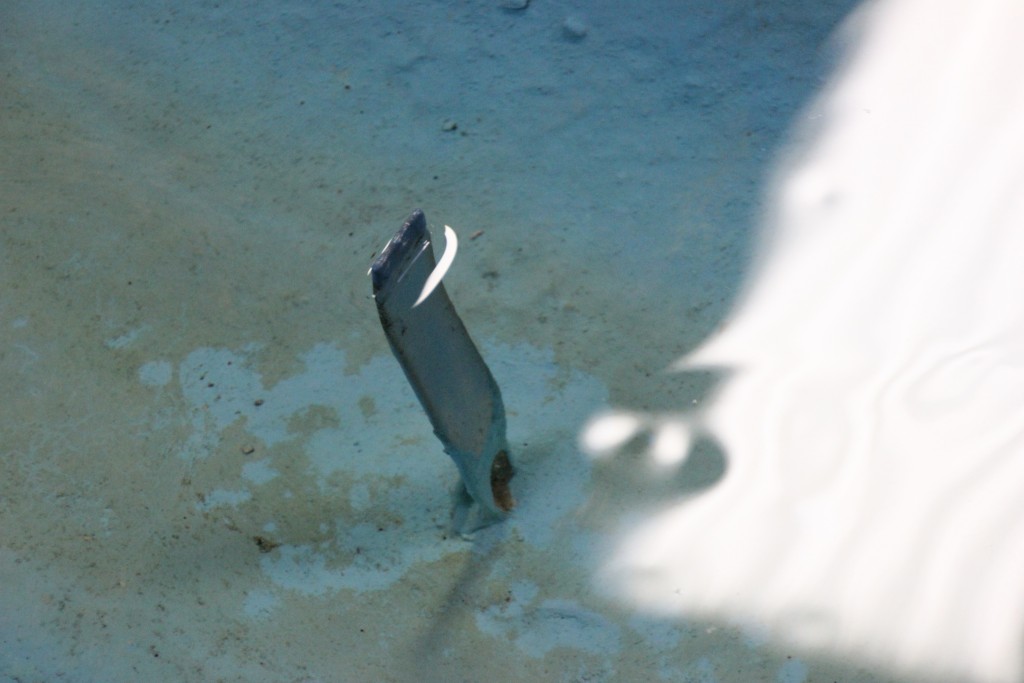 This is one of the copper conductors, and my inexpert attempt to show the water current.

It’s been updated, but this thing was built in 1956-57, and used until 15 years ago. (It seems like it could have been used a bit more. Building out on fill didn’t prove to be such a good idea when the Loam Prieta earthquake happened and the fill liquefied… although I guess the Model wouldn’t have demonstrated that.) 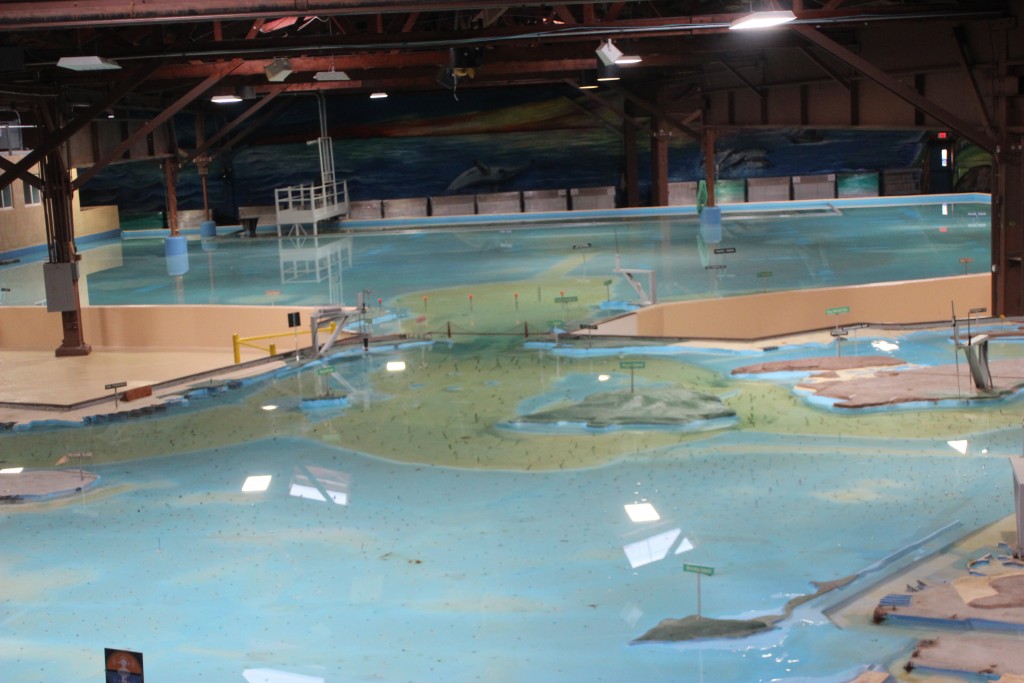 I would love to see a simulation, but it’s worthwhile just to see the model with some water in it, and get an idea about the scale of this watershed. It is an amazing, dynamic system and when you are in that warehouse walking around it, suddenly it doesn’t seem weird that sluice-style gold-mining in the Sierras in the 1840s led to the silting up of the San Francisco Bay, a couple hundred miles away. You can imagine how deforesting acres in Humboldt County, for example, would have a direct effect on the water supply of Oakland or San Francisco.

The Model was commissioned by Congress in the mid-1950s to answer some questions about an ambitious – or I might say “catastrophic” – plan called The San Francisco Bay Project. This is, I must say, the kind of political name that has helped make me so jaded. “The Clean Water Act,” the “Freedom of Information Act,” etc, where the name is the opposite of the proposal’s intention. The San Francisco Bay Project, brainchild of a retired actor and theater producer named John Reber, would probably have been more accurately called the San Francisco Channel project. Reber made an impassioned and eloquent argument for damming the north and south ends of the bay, the mouth of the San Pablo and the mouth of the South Bay, and turning them into fresh water reservoirs. Across the top of the two massive dams he pictured an eight-lane highway (this was in the late 1940s and early 50s) and train tracks. He decided they would continue to dredge a channel through the Bay for shipping. The dams would provide fresh water for human use and allow humans to “reclaim” thousands of acres to build homes on: on fill, in the shadow of a massive dam, in earthquake country.

Reber was persistent in selling his vision; talking about the miles of “recreational beaches and boating opportunities” the lakes would provide, how they could put in an airport on the reclaimed land and have military installations. He talked about how this plan would make the Bay Area easier to defend than it was now. (This is post WWII). While I don’t see for a second how adding two massive strategic targets makes an area easier to defend, the military liked the idea. So did business people, and so did central valley farmers who thought they would be able to get water from the reservoirs.

Frankly, it’s kind of miraculous that this atrocity wasn’t perpetrated, but Congress instead allocated $400,000 ($3.5 million in 2014 dollars) for the building of a model that would test all of Reber’s claims. The model took two years to build and they tests ran for several years. Reber died in 1960, never learning the outcome of his plan. In 1961, the Army Corps of Engineers submitted a report that showed conclusively that Reber’s claims were not supported scientifically. It also covered in detail the bad results; the death of local fisheries, the loss of shipping and many others.

Worth the Price of Admission

Using that sub-heading is kind of mean, actually. This fascinating science center and scale replica is free. It is open to the public Tuesday through Sunday from 9:00 am to 4:00 pm. There is a plastic box for donations, but frankly, neither of the two docents I spoke to encouraged me to donate. Of course I did, and I was pleasantly shocked that the place doesn’t even charge a token admission.

So why this, when you can do these simulations on a computer in 3D now? You can, and it’s handy. Seeing the model in real-life 3-D improves understanding. It did for me, anyway, almost instantly.

The Bay Model Center is not a national or a state park. It is owned by the Army, and in 2000, when the army stopped using it, they came pretty close to bulldozing the whole thing. With a donation system only, the Center is not contributing to its needs in a meaningful way, and that makes it fairly vulnerable. I think the ACE sees it as a good thing, but a “good thing” that does not provide an obvious benefit to its owner and doesn’t contribute anything to its self-support is a vulnerable thing. The days of government keeping things alive because they provide benefit to citizens is long gone.

Fortunately, the Center recently partnered with the Aquarium of the Bay and formed the Bay Center Alliance. Strangely, when you go to their website, there is something missing. There is no Donate button. I hope they correct this oversight soon!

The Center also manages an exhibit about Marinship, the World War II shipyard. Here is a nice piece of local history.

The Center has a set of picnic tables facing the harbor. It’s a good place to eat a bag lunch, or you can drive less than a mile south and have lunch in downtown Sausalito; seafood, Italian or French food, burgers, tacos or ice cream.

There wasn’t much I didn’t like but these few things stood out.

Parking was free and great. Unfortunately, it was hard to find and the markings were confusing. Actually, the entire place was hard to find and the two signs I saw for it were tiny. “The Bay Model.” That doesn’t tell you much. The woman staffing the bookstore talked to me about this. She said people, hearing where she works, ask if it’s a talent agency.

Advertising and Branding? Not much of either for such a cool place, although under the umbrella of the Aquarium they may begin to consider outreach.

I went there on a Wednesday. It was me and five other old people (retired, I’m guessing.) Where were the busses full of school children? People I’ve talked to remember having field trips here; but fewer and fewer schools are doing field trips these days.

The woman at the Visitor Center, who was very friendly and knowledgeable about downtown Sausalito, gave the Model one sentence, “North of town there’s a bay model, and it’s kind of a science center thing.” This is not good enough!

Soapbox/On. Everyone! Every school child north of Fresno should visit this thing twice; once in the fifth grade when they’ll just think it’s cool; once in the eighth grade when they’re starting to think about the bigger world.  Every single policy-maker in California should go to it and watch a number of simulations; not just every elected official but every single city planner, building department head, water agency manager should see this.  Soapbox/Off

Okay, since that’s not going to happen, anyone who likes the Bay Area, or likes science, or enjoys drinking water should go. Anyone who is ever going to design a video game that will have a world in it should go. Aspiring science fiction and fantasy writers should go. Take your writing group. Seriously. Writers like me, who struggle with the temptation to write, “A river ran through the middle of the city” and call that world-building should spend half a day here. We should consider how the rebel group hiding in the hills would think about the vulnerabilities of the tributaries to that capital city’s river. We should consider how the tides and currents affect the evil horde that is planning to invade by boat, or how you’re going to smuggle the royal infant to safety if the tide is coming in. And if the tide is coming in, do you really want your hero clambering around in the sewer channels under the city?

Seriously, people, it’s free. If you take a group you can use the carpool lane. You can hang out and buy souvenirs in town afterward. What’s not to love? This is one cool place.