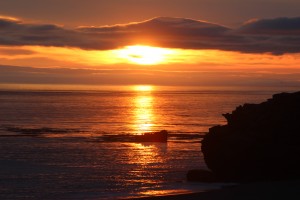 I spend Tuesday night at the Sea Cliff Motel in Gualala. From the balcony of our second-story room, Spouse and I watch a river otter swim the brackish water of the Gualala River, up close to its closed, sand-barred mouth. The otter climbs out of the water, lopes across the spit and slides into the Pacific ocean. We see its head out beyond the foam line before it vanishes from view.

Later a man stands on the flat rock along the path below us, holding up his phone to get a picture of the molten silver-and-gold sunset. Behind him, in a ragged trail down the path, seven other people stand, holding up their phones. It looks like one of those strange optical exercises, figures approaching a vanishing point.

When Spouse came down after work, I greeted him at the door. “You missed the party,” I said.

The party that answered the question, “How many women does it take to turn on the TV?” The answer is three. All three of us checked all of the connections twice, but it was the old-hand, experienced motel employee who checked them the third time, and the fourth, and finally just jammed on one that plugs into the back of the flat screen, one that seemed perfectly securely seated to me. “Stop, that’s it!” I shouted as the tiny red light on the screen lower right corner lit up.

The bed is a king, set in a large room that is mostly square. The bathroom is a narrow rectangle that shares the rest of the footprint with the balcony. The rooms have high-pitched ceilings that create a kind of cathedral feel. Even though the bed is a king, it feels narrower, and the red light from the television, and the green light from the DirecTV box, shine into our faces all night. The steady rush of the surf counters the light, soughing like a whispered lullaby. 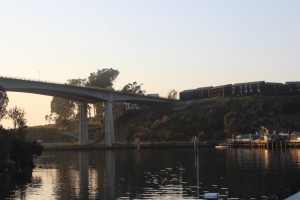 During the conference, I always stay at the Harbor Lite Lodge. Yes, they do spell it that way. The Harbor Lite is a sport-person’s hotel, aimed directly at people who love to fish. It’s built up the side of a cliff, which means that it is probably not a good place to be when the big earthquake hits. It also means that if you want one, you can have a perfect view of the working harbor and the bridge. I love the harbor. I love the bridge. 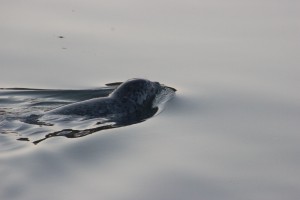 The bed is a king-sized bed with three sets of pillow marching across its snowy expanse. The bed is high. I like this. I wonder if it’s an old-person’s bed… you know, taking care of creaky knees. The mattress is very firm. I wish I were eight years old so I could jump on the mattress. I think about doing it now… and trampolining off it, falling onto the floor with a crash, lying there unable to move (“Help! I’ve fallen and I can’t get up!”) until housekeeping comes… maybe not this trip.

The room’s sitting area has a small sofa facing the large flat-screen (which also faces the bed), and a desk and chair, perfect for setting up a laptop, or reading manuscripts. The balcony has a tiny table and two chairs.

At night, the glow from the TV light, the DirecTV box light, the microwave and my charging cell phone all beam at the bed. One of those I can control, and I do. I throw a towel over the cell phone. Take that, you needy but convenient device!

I don’t sleep well, or at least, don’t have uninterrupted sleep, any night I’m at the Harbor Lite except the last one. I never do during the conference. First of all, I’ve chosen a room that’s above a working harbor, during sport-fishing season. Second, I do all those bad “blue screen” things right before bed, like catching up on e-mail and loading photographs. Third, long after I’ve left the campus, thoughts about writing, about reading, about the food, about everything, are swirling around in my head. And then there are those little colored lights. Saturday night, after the conference has ended, I go to bed at eleven, wake up once at 3:30, and again at 7:30. The first round of conference percolation, or “processing” is complete. 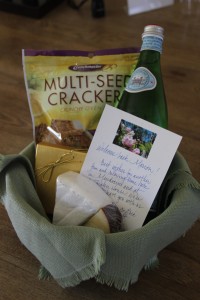 The owners of the Alegria Inn have three guest properties they manage. The Inn itself is on the ocean side of Main Street. Raku House, where I stayed, is a remodeled Victorian house across the street. It has four suites; Fireplace, East Suite and West Suite, and the entire upstairs, called Aloft. The Aloft Suite has two daybeds and one queen-sized bed covered with a puffy white quilt, accented with green and yellow flowers. Two small windows face east, overlooking a Victorian building next door, and one of village’s two cemeteries. The sitting room area, with two larger windows, shows Main Street and the ocean. The Raku House is aimed at the more contemplative guest. There are no gleaming lights because the room has no TV. I charge my phone around the corner near one of the daybeds, where the flashing light can’t distract me, and I turn off my laptop. There is a microwave and a coffeemaker but they are tucked away in an armoire. 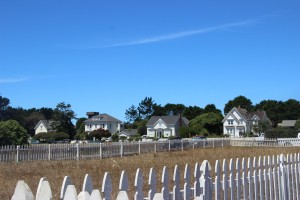 The first night I was there, the two suites downstairs were rented out to a family of four: Mom, Dad and two teenaged boys. I cringed a bit, but except for microwaving some lasagna at ten o’clock (the smell permeated my suite) they were quiet, unobtrusive guests. They are friendly and the boys are polite. At night, I can hear cars from the highway, but there aren’t that many. The two nights I am here, I can sleep as long as I want to, (practically speaking, I have to be out by 11:00 am on Tuesday) and “as long as I want to” seems to be about 7:30. Breakfast is delivered in a basket between 8:15 and 8:45, and usually by then I’ve had a cup of coffee and even gotten some writing done. Even if it’s only this post.

The Aloft bed also has a firm mattress, but it doesn’t tempt me to jumping the way the Harbor Lite bed does. It’s a more demure bed. I should be sitting up on propped pillows, sipping herbal tea and rereading Persuasion when I’m in the bed in Aloft.