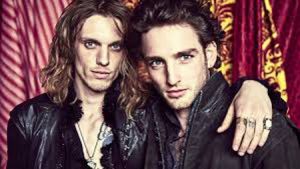 See what I mean? Marlowe (l) and Shakespeare (r) glam rock it up for the groundlings.

TNT has a new show on Monday nights at 9:00 pm, called Will. It’s allegedly about young William Shakespeare coming to crazy London in the 1580s to make his way as a playwright. The show conjures up a time shrouded in the mists of history; a time of war and poetry, anarchy and repression. The arts are exploding in a fantasia of experiment and imagination while the wealthy and powerful shore up their property and privilege at the expense of working people.

The time period it conjures is not the 1580s; it’s the late 1960s/early 70s. Think glam-rockers. Think Mick Jagger in Performance. Think Zeffirelli with a lot more gore and nudity.

The show’s design and sensibility is purely a 1970s take on the late Tudor era. Will gazes down its aquiline nose at mere historical fact, choosing to create a neon palette, a frenetic, colorful acid-trip rush of an extravaganza. It’s a festival of beautiful bodies, face-paint, glitter, gleaming fabrics, wild costumes, exuberant poetry. It’s The Merry Pranksters do Shakespeare. Historical details lose their grip, fall away, and drift in the wake of this joyous, bloody, arrogant story like iridescent dandelion seeds in a light summer breeze.

Seriously, a warning; if you like your Tudor period fiction or your Shakespeare fiction accurate, do not even tune in. It’ll be like going on a tasting tour at a gourmet cheesemonger’s when you’re lactose intolerant.

Also a warning: If you didn’t love the 1998 movie Shakespeare in Love, you probably won’t like this either. 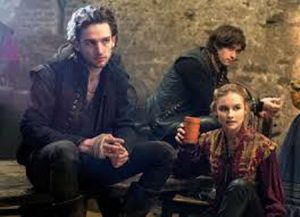 Will, Alice and Richard Burbage (back right) prepare for an epic poetry slam.

Will has created a dark and gory plotline with which to build suspense, and that plotline makes the playwright poet a practicing Catholic. In the opening episode, as Will bails on his wife and three kids to go make his fortune, his father gives him a letter to deliver to Will’s cousin, a secret priest in London. Performing the Catholic mass at this time in England was illegal; cousin Suttle is effectively a traitor. If case we somehow didn’t get it, Will’s mom hands him a rosary on his way out the door.

(I know, right? You’re Will Shakespeare, a player and a writer. Wouldn’t you dump the rosary in the first stream you came to, memorize the letter, and then burn it? But if you did that, there’d be no danger of discovery, so that’s not happening.)

There is evidence that John Shakespeare, Will’s father, was a recusant; a Catholic who refused to attend Church of England services (which was required by law). I have no trouble accepting William as a crypto-Catholic; I have a lot of trouble accepting him as a full-blown practicing one, especially one who is on his way to the royal capital, when he knows that one of the penalties for practicing his religion is death. Sure enough, when the street kid Presto picks Will’s pocket, the first thing he reaches for is not Will’s purse but the packet with the letter and the rosary. Will chases him down and gets it back, but Presto slashes Will’s hand. In short order, the creepy local Catholic-hunter, Topcliffe, is on the trail of a playwright with a cut on his hand.

The show diverts from the character development of Will and the group of players he’s met to linger over not one, but three long, graphic torture scenes. (If I count the execution, it’s four. Oh, wait, there are the flashbacks…) Topcliffe, probably meant to be Richard Topcliffe, an historical character, works for Sir Francis Walsingham, Elizabeth’s chief spymaster. In the first two episodes three things become apparent; Topcliffe doesn’t like Catholics; Topcliffe really likes torture; Will wants to challenge premium cable shows for gore content.

I think this is the nod to “realism;” see, life was cheap back then! They were brutal! All true, but a show that puts women on the stage in Britain in 1580 has left itself no space to crow about realism. 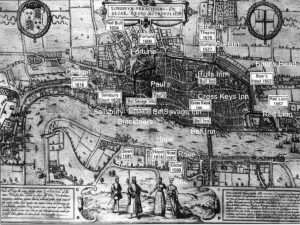 For all that, the rowdy hijinks of the players is not only good fun, I could imagine the Burbage troupe being the very group of players who performed the first live Shakespeare I ever saw, A Midsummer Night’s Dream, in 1973. I saw it outside, at night, in a redwood grove. Robin Goodfellow wore a Speedo and a bunch of tree-and-vine body paint. He was so drunk he fell off the stage once. He got back up on stage and delivered his next line without a blink. The fictional players in Will could be those guys. It was pure nostalgia.

Laurie Davidson, who plays Will, is handsome and hot. The character of Alice, Burbage’s daughter, who is, as she says, “That most useless of things, an educated woman,” acts as the troupe’s copyist and props master. Alice (Olivia DeJonge) is unlikely but right on the border of plausible, especially since women often ran businesses and trades in this time period. Early in the show Alice says to Will that there are three choices for a woman, “to be a whore, to rule a nation, or to have children,” and she hasn’t decided which one is for her. I liked the nod to the Virgin Queen. DeJonge has great screen charisma and beautiful, if totally inaccurate, costumes, including a gorgeous royal blue thing that I hope we see again.

Presto (Lukas Rolfe) is already developing as a psychologically interesting character even if it’s 2017 psychology. Clearly his story will parallel Will’s in some way. I’m wondering if something Will whispered to Presto, in a moment of desperation (it was a lie) will come back to bite Will in some way. I certainly hope so. Or, what if it wasn’t a lie? That would be a plot twist. 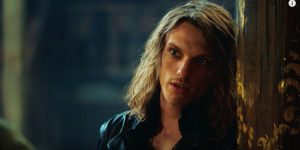 Really? She thinks I could be a fallen angel? That’s ridiculous.

And now, the main reason to watch this show; Christopher Marlowe. Marlowe, rock-star playwright, professional bad-boy and government spy, gets drawn into the intrigue surrounding the “playwright with the cut hand” and is a major player, at least in the first two episodes. He is tempter, offering Shakespeare a Faustian bargain (see what I did there? Because Marlowe wrote… oh, never mind); if Shakespeare wants money, power and fame, he should inform on his cousin. Jamie Campbell Bower plays Marlowe, and he is so beautiful that it’s almost a distraction. He’s also plunged into the role headfirst, playing Marlowe as practically a fallen angel… one who feels he has he the right to decide who is worthy of living and who isn’t. I think defiant atheist Marlowe would like this depiction. I look forward to seeing the mentor/rival relationship progress. Since the show isn’t following history, maybe Marlowe will escape the historical character’s fate and there will be a spinoff. 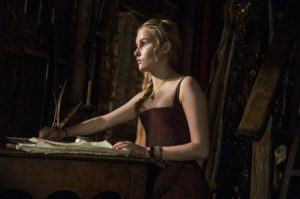 I bet I could write a play.

So… Will is an active Catholic; women are allowed to perform on stage; Anne Hathaway is about the same age as Will Shakespeare; Robert Greene spouted his famous “upstart crow” comment in a tavern rather than writing it in a pamphlet; clothing is completely inconsistent for the period.

And… Will, jotting down words and phrases as he sees and hears things; Alice, staking out proto-feminist territory under a queen who turned her nation into an empire; Shakespeare and Robert Greene engaging in a poetry-slam duel in a tavern; the costumes; Marlowe; backstage, which is not Elizabethan at all, but evokes a real backstage; Richard Burbage, the leading man who can’t act; the half-dozen vulgar and hilarious puns on the name Shake-spear. If they keep delivering this, I’ll keep watching. 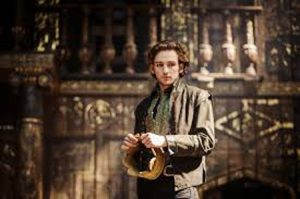 Uneasy lies the hand that holds the crown. Wait, that’s not right.