Normalizing Prosthetics: The Rise of the Hackmods

My friend M had one leg amputated last year. I’m not going to go into a lot of detail. While removing the leg was the best choice, and everyone, even M, thought so, making the decision and implementing the decision was a difficult, deeply emotional choice that tested M’s optimism, faith and courage deeply, then kept on testing his optimism, faith and courage through months of adjustment, therapy, fittings and recovery.

Flash forward nearly a year. M is doing great. He got a promotion at work; he’s healthy, he’s adjusted to his prosthetic. He and his family are taking a well-deserved family vacation to Disneyland.

It’s southern California. It’s June. California is having an early hot spell. M stands at the elevator in the hotel, having pushed the button, when a little boy charges out of one of the nearby rooms. (I don’t know the boy’s age). He barrels up to the elevator, looks at M, and wheels around, running back to the adults who are coming out of the room. He says something to them that M can’t hear – but he can guess. He can hear the woman’s response though, because she says it loudly enough. “People like him shouldn’t go out in public in shorts. They’re scaring children.” 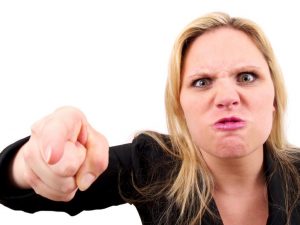 Somebody shouldn’t go out in public, definitely. I think we all know who.

What a terrible story, right? Well, M has faith in people, and a great sense of humor, and he followed up that story with another incident that happened on the same vacation. M was using the lift chair at the pool to be lowered into the water. A boy swam up to him. “How come you’re in a chair in the water?”

M told him he’d lost part of his leg and needed the chair to get in. The boy’s eyes got wider. “Can I see?” He dove under the water, looked at M’s amputation site, then surfaced and began peppering him with questions. M is, at heart, a teacher, and he answered questions for several minutes. When the boy had his questions answered, he said, “Cool! Have a good day,” and swam away.

When I was growing up I saw almost no one with a prosthetic. I rarely saw people in wheelchairs. When my father had a serious accident my freshman year of high school and was in a wheelchair for three months, it was a production to get him anywhere; basically, he went to church, and to the doctor’s office. Places weren’t set up for people in wheelchairs or with prosthetic limbs. There were few, or no, ramps; counters were at the wrong height, toilets were unreachable.

My dad had one friend who had what we called an artificial leg. He didn’t wear it at home because it chafed and hurt, and his wife was always treating sores on his leg where it rubbed, so they wouldn’t get infected. As a kid, I thought that was what having a artificial leg meant. Looking back, I can see how primitive the technology of fitting a prosthesis was.

That was then. Some things have changed, and they are still changing, and the rude woman in the hotel notwithstanding, they are getting better, I think.

I have some ideas about why. Some are rooted in anti-discrimination laws, some in improved technology and some in popular culture.

The ADA and Greed:

I know it’s popular for businesses to whine about the Americans with Disabilities Act, and subsequent laws that improve access to people with mobility issues, but the ADA made a huge difference. I am confident that good old-fashioned capitalist greed will step in and begin helping the ADA along here in the next few years. With baby-boomers aging and using more mobility devices, and an endless war bringing back plenty of veterans with prosthetics, businesses are eventually going to realize that it is a reasonable cost of doing business to widen those aisles, remodel that bathroom, or lower that counter. People don’t need to come to your store now; they can do nearly everything online. Why would they come to a store they can’t navigate, where they feel unwelcome, different, inconvenient? If you want them spending money in your shop, business person, you better make it welcoming. The ADA and Greed are the new Odd Couple but ultimately they will keep the normalization going.

Prosthetics are made better; lighter, stronger and sleeker, and miniaturization is helping make a prosthetic useful and moveable. There are prosthetic hands now that can have moving fingers (although I think the progress in this area has been overstated by the articles). The entire industry around creating and fitting prosthetics has gotten better. Fifteen years of war have created some of this… but one sad fact about war is that, historically, it drives technological innovation. I don’t know how heavy a prosthetic leg is now, but they certainly aren’t just clunky wooden or metal cylinders. They are sleeker, and tend to be made of strong but light materials like composite or aluminum, and some prosthetics have knee or elbow joints to allow for improved mobility.

At least in the USA, this ties in with the fact that we are a gadget crazy society, and this is the Era of the Geek. Geeks like tech. The tech around a prosthetic hand is as cool as that of a robot – in fact, it practically is a robot.

I talked to M a little more while I was writing this, and he expressed “ankle envy” (his term, and it’s a great one) for the higher-end prosthetics these days. If you can afford it, you can have a bendable-joint, lightweight, sturdy prosthesis that is also dirt-and-water resistant. It’ll probably cost you about $180K and it’s likely your health insurance won’t cover it.  The system uses a K1- K5 rating system for amputees to determine what type of prosthesis you need: K-1 is a person who does some standing and walking, short distances, on level terrain. I’d guess an office worker who doesn’t also coach a sport, hike, do search and rescue or run marathons would be a K1. K5s are your active athletes. Cost is definitely a bigger driver than manufacturing is.

Whether it’s commercials, sports, movies or television, there are more and more positive images of prosthetics these days. Luke Skywalker, the original Star Wars hero, has a prosthetic hand. There’s a commercial for dog food where a veteran amputee adopts a dog that, the shelter guide says, has “been through a lot.” The images are becoming more positive and, more importantly, ubiquitous.

I’m going to shift focus slightly here and talk about a SyFy show called Killjoys. Killjoys is high-action, high-humor, high-fashion, sexy fun with a kickass woman lead and two handsome, smart and funny male sidekicks; a talking starship, and lots of comments to make about patriarchy, capitalism, autonomy and enslavement. This leads me to a group of people they introduced in the second season, and devoted some time to early in Season Three, the hackmods. 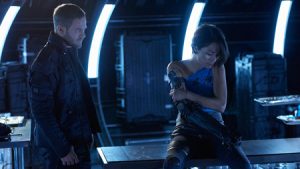 Hackmods have been physically and/or cellularly modified, and as you’d expect because it’s television, most of the hacks we see are physical. The hackmods usually did not choose this life for themselves; many were sold to the Hack Factory; some were abducted; some are indentured. Hackmods are created for particular purposes; a biological arm might be replaced with a multi-use weapon/tool; eyes may be repurposed as camera feeds, and so on. The hackmods we see have escaped from the factory and some have escaped from slavery. They embrace their differences and even enhance them, but the hackmods know they are different from the faddists who add a hack for style. As one hackmod character says, they may love their mods; they don’t love the fact that they didn’t have a choice.

I think that statement might be true for every human with a prosthetic or a mobility device.

Most of the point of the hackmods echoes the show’s themes of economic injustice, enslavement and the oligarchy; but in the third season, hackmods are briefly given the limelight. They aren’t creatures who inspire pity, ridicule or horror; they are strong and smart; they have their own agenda; some are villains, some are heroic. They normalize prosthetics.

And, ultimately, we can normalize prosthetics. We can celebrate the boy in the pool, who got curious and asked questions. We can work on our own vocabulary. For me, it’s been a lesson to stop calling a prosthetic an “artificial arm/leg.” It isn’t artificial; it’s a genuine limb. It’s just not bone and flesh.

We can practice being courteous.

And yes, we can see a man in southern California in shorts when it’s 90 degrees outside and not freak out because one leg is made of metal and composite.

I think that rude woman in M’s hotel should watch Season Three of Killjoys. Then she should re-watch the original Star Wars trilogy. Then she should get a life. Prosthetics aren’t scary; they aren’t pitiful. They’re normal. Get used to it.

This entry was posted in View from the Road and tagged Disneyland, hackmods, Prosthetics, Star Wars. Bookmark the permalink.

One Response to Normalizing Prosthetics: The Rise of the Hackmods