I predict that in a few years’ time there will be college courses in media studies devoted to Hulu’s The Handmaid’s Tale and BBC America’s Orphan Black, studying their critiques of patriarchy.

Orphan Black is science fiction (the best, with The Expanse, that is currently on TV), about a group of women who discover that they are clones. They have reached adulthood without knowing their origins. Rachel Duncan is the one exception. Rachel is an upper echelon executive at a corporation called Dyad. Unlike the others, Rachel has known from childhood that she is a clone, a science experiment. She was raised by Ethan and Susan Duncan, geneticists and government scientists. Now an adult, Rachel is close to the levers of power at Dyad, which is a front for an extreme transhuman group called Neolution. Neolution seeks to control humanity’s evolution through genetic manipulation. The women main characters are part of one line of clones called the Leda line – all female. There is a male line as well, the Castors. Both sets of clones have artificial gene markers that proclaim them “intellectual property.”  The question, “person or property” reverberates through all five seasons of Orphan Black.

Rachel is the “villain” clone. She is as polished, elegant and brittle as a blown glass figurine. She is loyal to Dyad and holds the other Ledas in contempt. She’s fine with killing them and comfortable with lying to them. She has no trouble withholding a potentially life-saving treatment from Cosima, the Leda clone who is a scientist herself. As the series progresses, we discover that Rachel was the author of the “Helsinki project” that resulted in the elimination –murder — of many Leda clones.

Rachel lives in gleaming, stylish luxury. She ascends the ladder of power sure-footedly, until a clash with Sarah (the first clone we met in the show), leaves her injured. In the power gap that follows, another faction of Neolution arises, but Rachel schemes and manipulates her way back into power. Along the way, ruthless Rachel nearly kills her adoptive mother Susan. This sacrifice, it seems, gains Rachel entry into the secret inner circle of Neolution, and a meeting with its founder, P.T. Westmorland.

Until now, Rachel has played by the patriarchy’s rules. She has put Dyad ahead of any ties of love and affection. In the final episodes of the series, Rachel steals Sarah’s daughter, Kira.  Dyad intends to harvest Kira’s ova and start an improved line of Leda clones. Literally, they are going to take away Kira’s reproductive power, and Rachel is coordinating it. Hours away from the operation, Rachel puts the clues together and realizes she has been betrayed.

She doesn’t have a seat at the table. Any agreement promising autonomy, privacy and “personhood” is worthless. She thought she was an equal, a partner, but she is neither. She’s what she has always been, a tool, kept safe as long as it is useful, ready for discard as soon as it ceases to be. 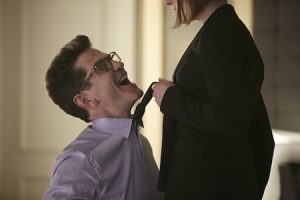 The biggest signal to the viewers that Rachel was never an equal is her sexual relationship with Dyad’s hit-man and “fixer,” Ferdinand. Ferdinand enjoys being tied up, slapped and generally humiliated by Rachel, while he’s calling her a “dirty little clone.” Ferdinand gets off by being tied up and “disciplined” because he knows he is at no risk. We all understand that dominatrices are not a model of women in control. They are sex workers getting paid to act out a fantasy role. That is what Rachel does for Ferdinand, although she doesn’t get paid. Rachel enjoys ordering her sexual partners around, and she may derive some short-term pleasure from her own fantasy, that she is punishing the men who have used her, but she is not assuming control, not flipping the script. She is a tool for fulfilling the paid killer’s desires.

When Ferdinand is actually tied up and humiliated by a Leda clone (who takes all his money), when he finds her, he brutally murders her.

Throughout the show, Rachel clings precariously to the slippery peak she has achieved. She will back-stab and betray anyone except Neolution’s leader. She betrays others like her without a blink. She tries to kill her own mother to win acceptance, a sense of belonging. In the end, Neolution has no trouble using her, diminishing her, augmenting her without her knowledge or consent, and betraying her. Do you need knowledge and consent to augment a thing that isn’t even a person?

Until the last few episodes of the series, Rachel isn’t that much different from someone like Ivanka Trump. Trump glides along on the golden sled of her father’s inherited wealth and privilege, declaiming, “I’m a feminist!” as her shoe and apparel apparatus exploits women who are often the sole support of their families. Trump even lacks the courage of the fictional Rachel, refusing to face what she’s done to women, using the excuse that she is a “hands-off” CEO. At the same time, she accepts sexual comments and innuendo about herself from her own father, in exchange for her precarious high-status perch. She must know that she is not a partner, not an equal, but an ornament; a tool or a toy.

In some ways, Rachel reminds me of Sheryl Sandberg whose preachy book Lean In scolded women for not overcoming the patriarchal system to be CEOs like her. I’m not saying Sandberg isn’t smart and didn’t work hard, but her arrogance and denial of the reality of life of 90% of American women was not a good look for her. Trump and Sandberg are active agents of patriarchy, but they aren’t partners, aren’t equals. Any seat at the table is provisional. They have not beaten patriarchy at its own game; they are ornaments at least, cover at most. They are tools.

I don’t mean to say a talented woman cannot achieve. I’m saying we need to keep our eyes open and we need to watch closely for the pitfalls of patriarchy.

I’ve compared Rachel to Ivanka Trump, a symbol of the excess and hypocrisy of the current era. Now I’ll compare her to the women computer science engineers who took jobs at Uber. They were jazzed because they thought they worked in a meritocracy, where their smarts, skills, vision and dedication would be rewarded. They discovered that the inner circle was closed to them; that their work was taken and the credit given to men; that sexual harassment was the norm in the workplace;  they were not partners and not equals, merely tools. Many of them left Uber. One of them broke the silence, bringing down on herself a flood of rape and death threats; but she shone a light on a poisonous environment. That’s beating the patriarchy, and you don’t do it without getting wounded.

Of all the Leda cones, Rachel is the unlikable one, and this is intentional. She is meant mostly, in story terms, to be the adversary/opposite of Sarah. Rachel deals damage to other women, and ultimately to herself. She is one facet of patriarchy and she, like her mother Susan Duncan, is an object lesson for us. You do not beat the patriarchy, in this era, without taking damage, and Rachel has flesh and blood wounds as the series heads into its final episodes.

How do you combat a rigged system? Orphan Black tells us that you form community, you speak the truth, and you be prepared to lose reputation, standing and social status, at least in the short run. You create, and cherish, your family. You fight for one another. And maybe, eventually, you find freedom.

Rachel is an unpleasant character but we can learn from her. She is a cautionary tale, and we’re listening.

This entry was posted in Television Tuesday, TV Shows. Bookmark the permalink.