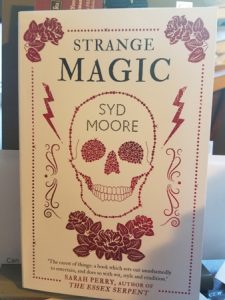 You had one job, Strange Magic. One job. That was the entertain me.

And you nailed it.

Strange Magic, by Syd Moore, is a British mystery – not a murder mystery. People were killed, but it was a long time ago and nobody dies of foul play in the story’s present. The mystery, the puzzle to be solved, is the whereabouts of a human skeleton, the bones of Ursula Cadence, an Essex woman who was hanged as a witch in the sixteenth century. And Rosie Strange, a government Benefits Fraud investigator, is just the woman to find them, with the help of the curator of the Witch Museum Rosie just inherited.

Strange Magic is told in the first person from the POV of Rosie, after a prologue in a completely different point of view, in which a comatose little boy is possessed by a spirit. The purpose of the prologue is to let the reader know the seriousness of the quest for Ursula’s bones, since the possessing spirit is that of her son, who only wants to be reunited with his mother.

In Chapter One we meet Rosie, who has come to inspect her inheritance, her eccentric grandfather Septimus Strange’s Essex Witch Museum. Rosie has no emotional connection to the place, which looks like a run-down roadside attraction. She plans to sell the property for as much as she can, scoop up the cash and go back to her London life, probably pausing only for a mani-pedi on the way back. For the first few opening paragraphs I liked Rosie’s narrative voice. As the chapter progressed I started liking her less. She seemed money-hungry, fashion obsessed, and shallow. Fortunately, the curator of the museum, Sam, was cute and smart, and I liked him, and very soon a university professor showed up with a “life and death” quest for the bones of Ursula Cadence, one of most famous witches of Essex. Hearing that there might be a reward for finding the bones, Rosie resolves to help search for them, figuring she can always sell the museum later.

And then a funny thing happened. Rosie grew on me. Don’t get me wrong, Rosie is money-hungry and fashion obsessed. She is not shallow. While she continues to harp on money throughout the book, the tone of the harping changes, as Rosie has to remind herself that she’s planning to sell. The museum, and Ursula, have made a connection with her, and during the course of the book Rosie gets in touch with her better (or maybe truer) nature.

Pretty early in the book, on their way to meet with the professor, Sam gives Rosie a brief academic lecture on the stereotype of the Essex Girl (which Rosie is). The Essex Girl is to Britain what “bimbos” or “dumb blondes” are in the states. It’s a negative female stereotype; a usually-dyed-blond woman, uneducated, shallow, who is fascinated with shopping and personal grooming and indulges in indiscriminate sex. Sam opines that the Essex Girl is merely an updating of the Essex witches; a propaganda tool to keep women down.

Rosie does share many of the traits of the stereotype, but she is a real person. I liked that her job, as a fraud investigator, made her a natural for this quest. Rosie is smart, and she has a skill set that lets her winnow fact from falsehood, exaggeration and outright lying. We readers see that Rosie has another set of skills that she uses without realizing it, and that Septimus left the witch museum to her for a reason.

A road trip makes up the first two-thirds of the book, and most of the road-time is taken up with pedantic Sam lecturing about the Essex witch craze and the use of magic throughout British history up through the twentieth century. Could be boring. It isn’t. There is no travelogue; descriptions are limited to hotel rooms and pubs, and the inside of museums, and that’s just fine. A ghost appears, although frankly it’s not much help, being more of a nag than an oracle. A ghost wailing “Huuurrry!” over your shoulder while you are already on the clock is not useful. Those scenes are convincing, though.

The villains show up late with only a little foreshadowing, and the last third of the book consists of a big expository lump that wasn’t as entertaining, and a rushed climax that includes an interesting religious ceremony. I thought the pacing was off in the last third of the book. The final chapter reveals nothing of the Strange family, but sets the stage for the second book, Strange Sight, which will be out later this year.

So the pacing was off, by my lights, and I didn’t love the main character at first… but I did by the end. Rosie is a feminist; a woman who is smart and knows it, who is confident in many areas (like her career), unafraid to express an opinion or join a conversation, and who is still unsecure about her physical appearance, and still, underneath the trendy clothes and the manicure, lonely. Her tendency to bristle with jealously whenever Sam spoke to a woman under the age of seventy-five did get old, but I forgave her that. And this was an interesting story.

Strange Sight is an entertaining summer read. The language is G-rated, there is some described torture at the witch museum, and no sex… not even a kiss, I think, although we get lots of descriptions of two very attractive men. Seriously, if you’re going to have a few nights in a hotel, a long plane flight or train ride, or you just want to hang out by the pool, then Strange Magic might fit you like scones fit with tea… or, if you’re Rosie, like vodka fits with Coke. One quibble; the book, published by Point Blank in the USA, has a lovely cover that evokes el Dia de los Muertos, a completely different spiritual tradition, and that might be confusing to American readers.