Dorothea Lange; the Politics of Seeing 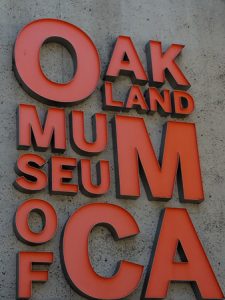 Dorothea Lange was born in 1895 and she lived in New York as a child. As a youngster, she survived polio, and then when she was six her father left the family.

About photography, Lange once said, “I had a coat of invisibility. As a little lame girl walking through the Bowery, I learned not to be seen.” She also said, though, that with all of her photos, she always said who she was and what she was doing. “I never stole a photograph,” she said.

We take an exit one exit earlier than the one our directions call for and end up a few blocks away from the Oakland Museum of California. The museum is close to Lake Merritt. It seems like getting there should be easy, since one of the streets is a numbered street and we can navigate to it easily, but we reckoned without the alternating one-way streets. It took driving in an elliptical pattern for a while, but finally we found our way to the entrance to the parking garage. Our route took us through part of Chinatown, where graffiti dragons grace the walls of many buildings. I imagined that they offered protection to the businesses within the walls they inhabit. 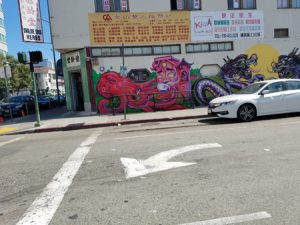 Dragons on the walls.

“Dorothea Lange; the Politics of Seeing” will be at the Museum through August 27,2017. It includes Lange’s work for the US Farm Security Administration – Lange’s best-known work, giving a face to the Great Depression and the southwestern Dust Bowl. The exhibit goes beyond that though. They have a wall dedicated to some formal portraits from her studio in San Francisco, which she took before she started work with the Farm Security Administration and later with the US Army. 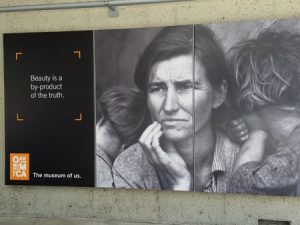 This, the most famous Lange photo, brings its own controversy about who owns an image.

Lange took lots of pictures in the rural south, and captured the racism in the tenant-farmer (sharecropper) system. The FSA was upset when it got her negatives, because they had wanted the focus to be on white rural poverty. Apparently, they thought that “white poverty only” didn’t need to be said out loud because it was obvious. Lange didn’t agree.

I knew she had taken pictures of American-Japanese and Japanese-born American citizens interned at Manzanar, but I didn’t know scope of that project, and what had happened to it. The US Army hired Lange to photograph the forced relocation of citizens and lawful alien residents into camps. They wanted to show the American people that this was being handled in a calm efficient manner, like a military operation, and to dispel any allegations of torture or mistreatment. (I have to wonder why they were so worried about that.) They hired Lange because they had heard she was good, and hard-working. Obviously they never look at any of her earlier photos.

They got a shock when they saw her pictures. She portrayed the grief and dignity of people leaving everything they’d built, because they wanted to be good citizens. She captured images of children clutching one doll as they climbed into a van and drove away from their homes. The military sequestered the photos for years and they were never shown until years after the war. 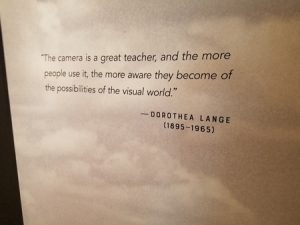 “The camera is a great teacher.”

The Oakland Museum of California has Lange’s 25,000 negatives and her 6,000 prints. Lange’s widower donated them to the museum’s permanent collection after the photographer’s death in 1965.

At first, the exhibit didn’t seem very large, but I kept turning into alcoves and finding walls with photos I hadn’t seen. After I watched the film about Lange’s life, I thought I was done. I walked toward what I thought was the entrance but instead entered a room that had Lange’s Public Defender Project photos, something I’d never heard of.

One wall showed photos from her project The Death of a Valley, the flooding of Berryessa Valley by the damming of Putah Creek in the late 1950s. 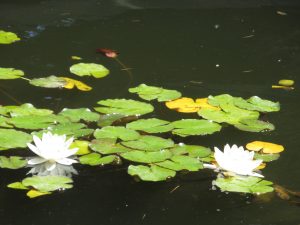 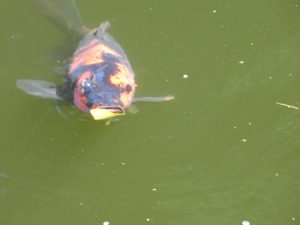 After we finished looking at The Politics of Seeing, we went outside to see the koi pond. The koi are large, beautifully colored, and seem tranquil. It’s hard to judge the emotional state of a fish. I started to walk down to the end of the pond just to see what was there, and I found a night heron. Did I say I found one night heron? There were five around the pond, three adults and two juveniles. We also saw lots of pond turtles. On our way back we spotted two more herons in the redwood trees. We surmised they have a whole rookery there. 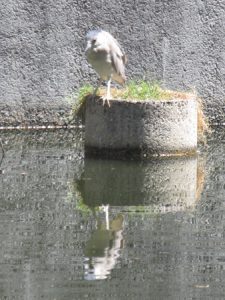 One of the museum workers said she thought they stopped at the pond to catch baby turtles, since there was no other food in the water. We decided turtle eggs might be more of a draw. The museum is two blocks from the lake; and the cluster of redwood trees provides good shelter. While we were there, the adult herons appeared to be stabbing at flying insects. I think the lake is a preferred hunting ground, and the museum is home. 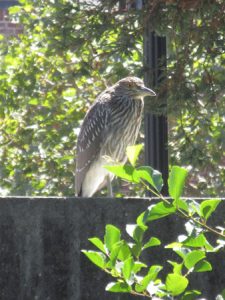 The museum has a café but the pickings were slim since the kitchen was closing early to prepare for catering a fundraiser that night. I can recommend the black-bean soup though. 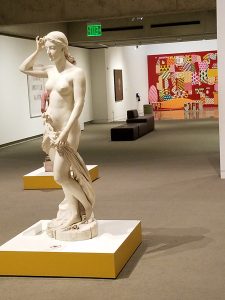 Because if there isn’t a statue of a naked woman, it just isn’t an art museum. 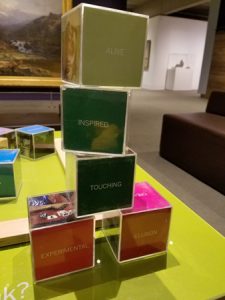 Interactive exhibit in the Creativity Gallery

The Creativity Gallery had a large display devoted to the furniture and furnishings from the Arts and Crafts movement. It also had more modern art and several interactive pieces. 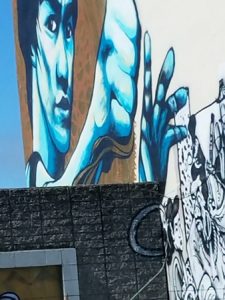 The Oakland Museum, with its focus on Northern California, is an unsung treasure. Their collection of Native American art, the Arts and Crafts movement, protest art from the 1960s and 70s, and wartime exhibits, lets them show the Bay Area’s history in vivid realistic ways.

And with Lange, specifically, at a time when the current administration is trying hard to demonize various groups of us, and set us against each other, the act is seeing is political, and revolutionary. Lange shows us how to do it.