Reykjavik has murals. Some are city sponsored, some are commercial, meant to advertise a business, and some are volunteers, quite close to “tagging” or conventional graffiti. Each category has some outstanding items. 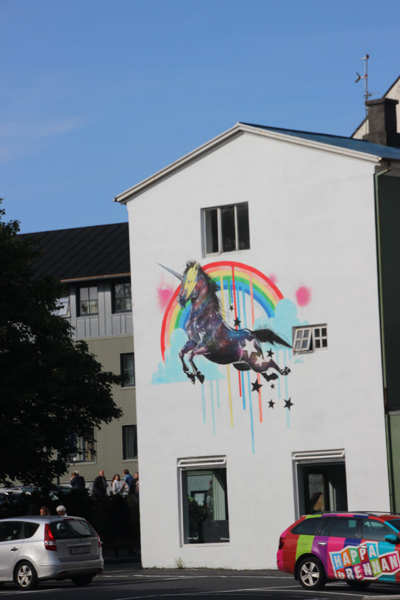 Rainbows, unicorns and a matching car.

At the Skuggi Hotel, where I stayed my first two nights in Iceland, one of the counter people told me that somewhere in the city there was a rainbow unicorn mural. She didn’t know quite where, but I found it, diagonally across the street from the Reykjavik City Hall. 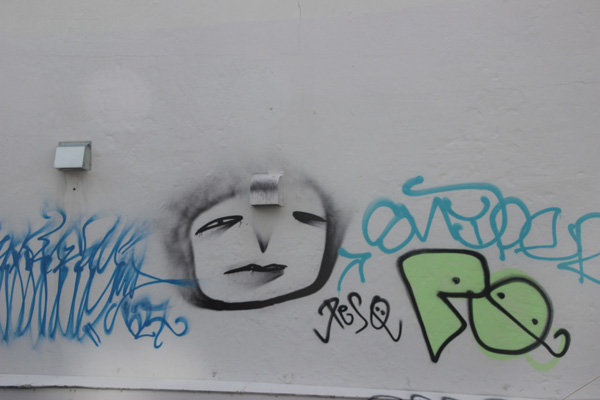 This is clearly tagging, but this face showed up a few places.

Iceland’s Keflavik International Airport is a stopover  for many flights heading into Europe. Sometimes the stopover can be as long as 24 hours. Clever, enterprising Icelanders saw an opportunity here, and put together a smorgasbord (yes, that’s an attempt at a Scandinavian pun) of tours for the stopped-over traveler. I’m going to provide a link to Gray Line Tours so you can get an idea; we used them and liked them, but they are not the only tour providers, by far. Here’s a sampler:

They should add a Murals of Reykjavik tour. I think it would sell out. 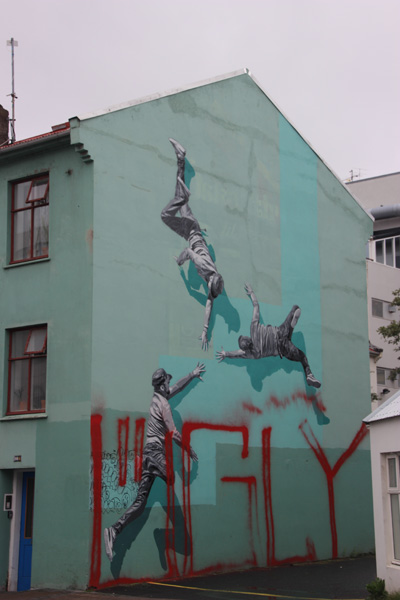 Three Men Flying. I think the letters at the bottom of this mural were meant to deface it. And it is not “ugly.”

The flying men was the first mural I saw. It was one block down the street, across the street, from my hotel. 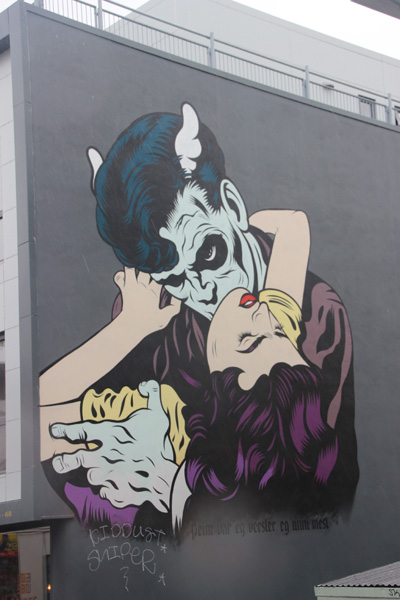 Horned demon bites the neck of a 1950s movie queen. So cinematic!

The blood-sucking demon was the first one that caught my attention, in the sense of, “Wait! There are murals in this town!” It’s on the shopping street. 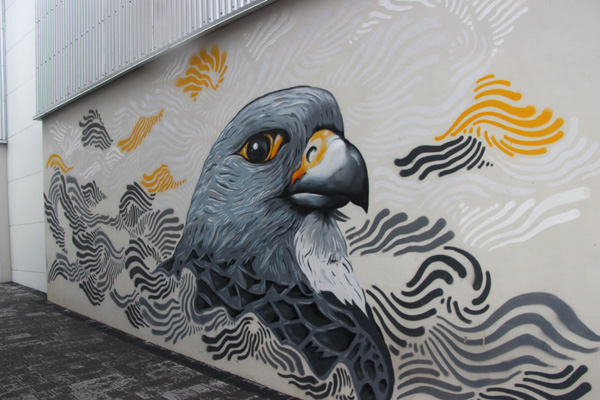 Falcon mural. Don’t know if this is a sanctioned mural or a volunteer.

Three comic-book figures decorated panels of an exterior wall of a business on the south side of Snorribraut. I suspect, based on no information, that they represent a character or a characteristic of the business itself. 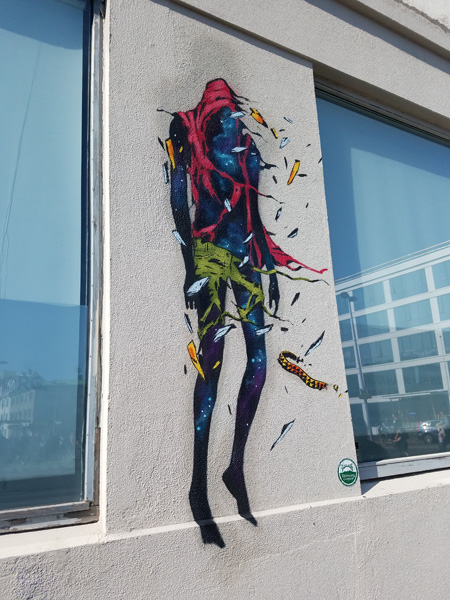 A comics character? A game figure? 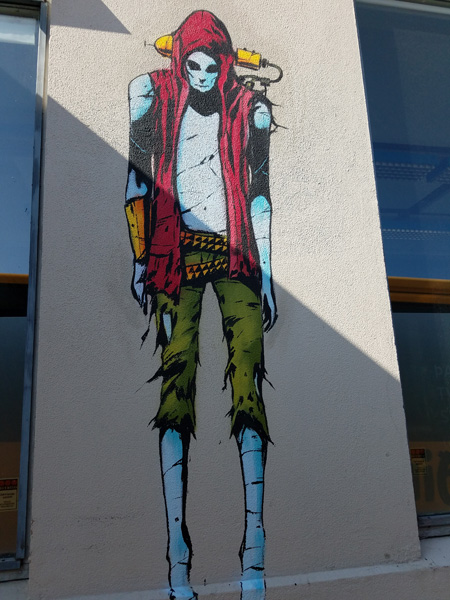 The game figure, at an earlier point in its life cycle. 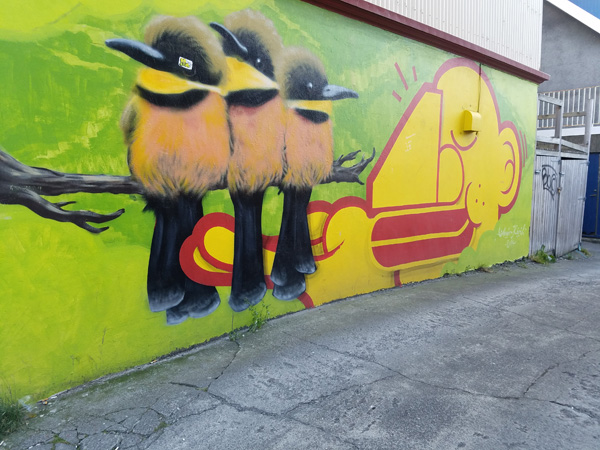 Birds on a wall.

When Linda and I looked at this with only our eyes, we both saw figures with human heads. My excuse, and I’m sticking to it, is that the Continental Rift had eaten my glasses. Linda was wearing hers, though. It is only when we each looked at our photos that we grasped that they were birds. And, I mean, they’re obviously birds. Some strange optical illusion was happening there. It may have had something to do with where we were standing before we each moved back to take a picture. 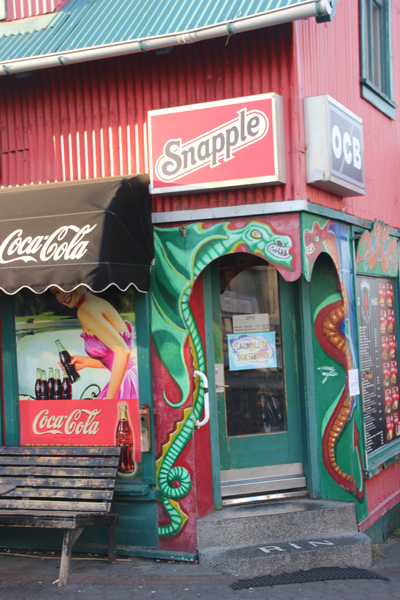 This corner store with two dragons. It’s not graffiti but I loved the subject matter and the colors.

On our walk back from The Pond to Skulagata, I saw this. It’s a “volunteer,” but I love it. Sometimes our best art tool is words. 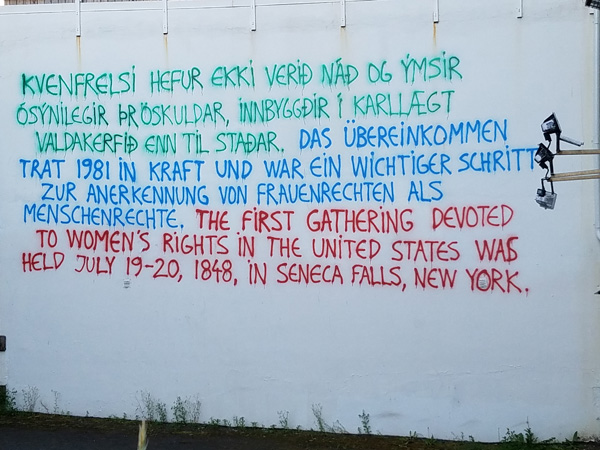 This entry was posted in View from the Road and tagged art, graffiti, Iceland, murals, Reykjavik, tours. Bookmark the permalink.