The Continental Rift Ate My Glasses

Iceland is full of natural wonders: active volcanoes, waterfalls, glaciers, steam vents, lava fields, hot springs and lagoons. The Golden Circle Tour takes about eight hours, leaving from Reykjavik, and offers a sampler platter of these beauties. Specifically, on the Golden Circle tour you can see Gullfoss or the “golden falls,” a double-decker waterfall that hurls rainbows in all directions; the continental rift, and an active geyser in a geothermal field at Geysir. 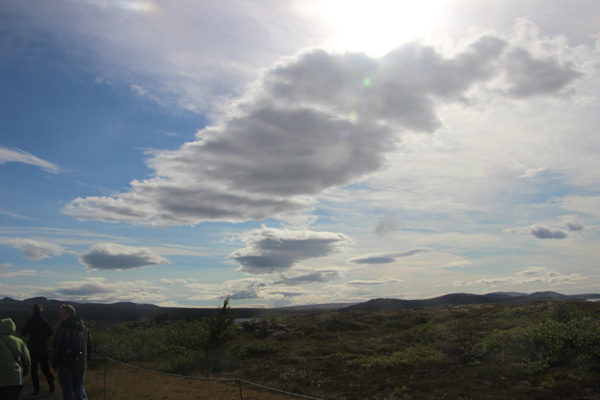 Skyscape on the route to Thingvelle and the continental rift.

There are many, many tour companies in Iceland. We chose Gray Line for cost and convenience, and I was not disappointed. We had a great guide. The bus left from Gray Line’s Reykjavik depot, but if you are staying in a hotel, there are nine Gray Line bus stops, so there is probably one within walking distance. (A Reykjavik city ordinance prohibits the buses from loading/unloading directly in front of the hotels because it creates a traffic delay; hence the nearby bus stops.)

The Continental Rift was Pretty, but it Ate My Glasses:

If it feels like North America and Europe are drifting apart, it’s not merely current political choices that have led to that sensation. The North American and Eurasian tectonic plates are pulling away from each other at the rate of just under 1 centimeter per year. This rift then fills in with silt and water. In Iceland, the continental rift is about seven kilometers long. It’s filled largely with Iceland’s largest fresh-water lake. 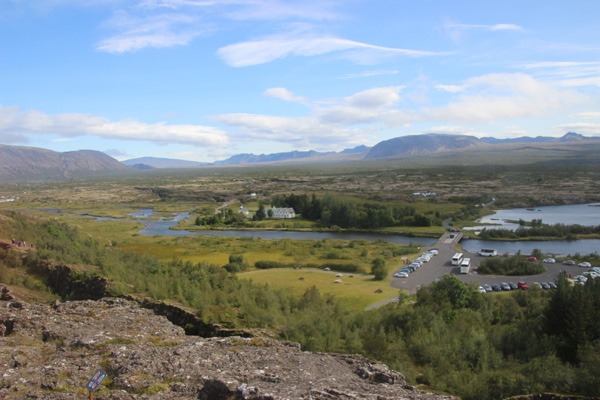 Iceland’s National Park, Thingvelli, houses the rift, the lake and the Alpingi, home of Iceland’s first democratic parliament, which started in the common-era year 930. Part of the reason this area was chosen is because the vaulting volcanic walls form a natural amphitheater. The nearby lake and wetlands provided plenty of food for a large crowd. And, relatively speaking, it was central and easy to get to. 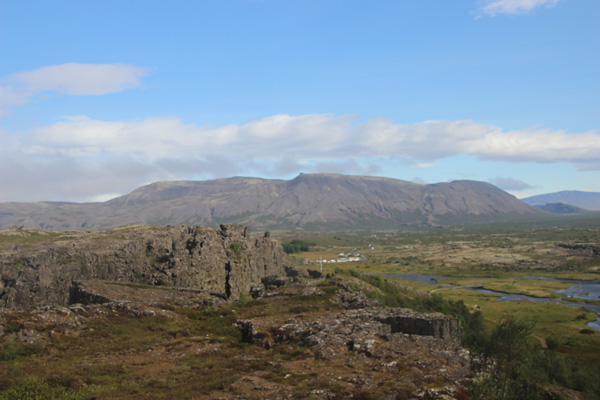 The Alpingi, the natural amphitheater and site of Iceland’s democracy, 930 C.E.

The original Icelandic settlers were, hmm… how to put this nicely?  Let’s say they didn’t have a lot of use for kings. Many were outlawed or exiled from their Scandinavian country of origin. They wanted a different form of governance, and the Alpingi (Pronounced al-thing-kee) provided that. They met at the rift, inside the curving basaltic walls to decide on new laws, settle disputes, reapportion land, and celebrate marriages. 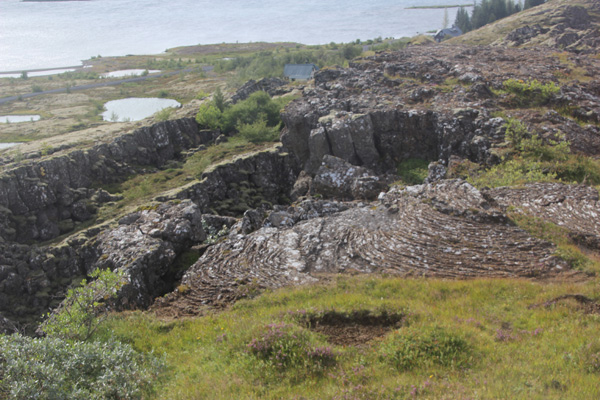 Lava rock and cliffs. Just to the left of the whorled lava, you can see a gap in the rock. That’s like the one my glasses went into.

(The Icelandic alphabet has more letters than the English one. One letter looks like a capital P done in an arty font. It is pronounced like the “th” in “there.”  Thingvelli is a transliteration; the original first letter is the Icelandic one.)

The terrain of the rift is awe-inspiring. From the tall walls of rock, to the places of swirled black lava and the vistas of the meandering waterways, leading to the lake, that are far below.

Yes, it’s beautiful, but I don’t like it, because it ate my glasses. 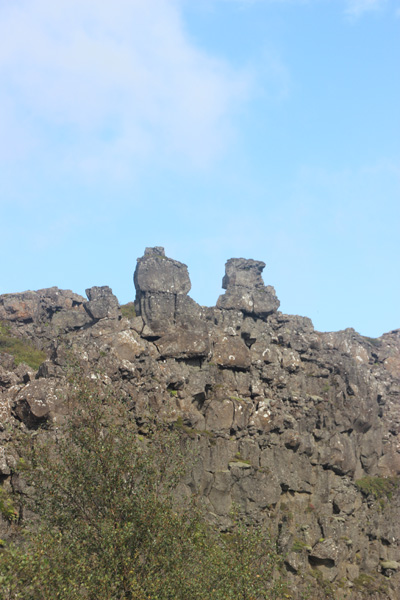 The elders watch. And laugh, probably.

When we stepped out of the bus, it was windy, but at first it didn’t seem that windy. I had a jacket and I was comfortable. We walked along the trail into the lava cliffs. We were at the top of a cliff, looking down at the rift valley below us. I turned slightly to my left, intending to get my phone out to take a picture. The wind caught the left earpiece of the glasses and lifted them off my face before I could even register that it had happened. I started to turn. I don’t think I even reached for them. The glasses hit the rocks, skittered under the safety fence (pushed by the mischievous hand of the wind) and fell down a gap between two forty-foot monoliths of basalt. I didn’t even move. I didn’t dive for them. There wasn’t time.

I think I squeaked.

My friend said one of those things you say in a moment of crisis: “Were those your glasses?”

I was in shock. I was, seriously, in shock for about ten minutes. I didn’t know what I was going to do. (For a few seconds I was like, “Well, I can never leave Iceland now, because I can’t drive home.”) I thought of calling our guide, G, for help, and then I looked at the crevice where they had fallen and knew there was no point. They were gone. I was nearsighted in Iceland.

It was a bad few moments. Fortunately, I wasn’t alone, and my friends still had their glasses, so they could still see.

(Had I brought a pair of backup glasses? Why no, I had not. Certainly it would have been a good idea, but I honestly had not imagined a situation where I would lose my glasses.)

Much of the continental rift is a blur after that – literally, of course, but also emotionally because I had to go through the five stages of grief. Fortunately, the distance lens on my big camera brought everything into focus and I could still take pictures. And we were on a bus. The big problem was mostly that I had agreed to share the driving of the rental car and that was now impossible. Daniel let me try his prescription sunglasses, but his prescription is very different from mine, and that was not successful.

I soldiered on, and the rest of the trip was okay, but I now hold a grudge against the continental rift. 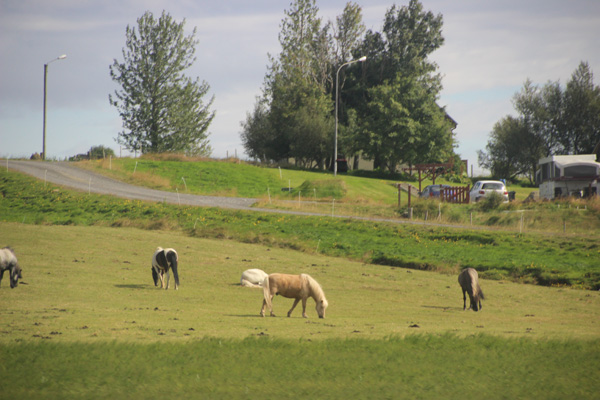 The Golden Falls – Gullfoss – is a two-tiered wall of crashing white water. The falls narrowly escaped destruction in the 1920s when a group of foreign investors wanted to dam the river and use it for hydroelectric power. Tomas Tomasson, who owned the stretch of river, refused to sell, but the investors went behind his back and cut a deal with the government. By then, Tomas had died but his daughter, Sigirdur Tomassdottir, advocated for the river, including walking to Reykjavik – some say barefoot – to speak for the waterfall and letting the river remain wild. She prevailed. 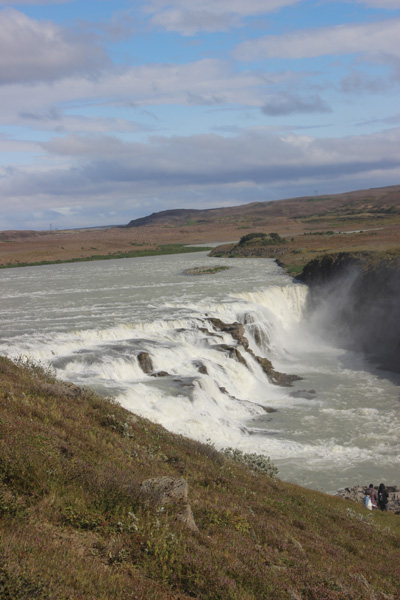 The top half of Gullfoss. 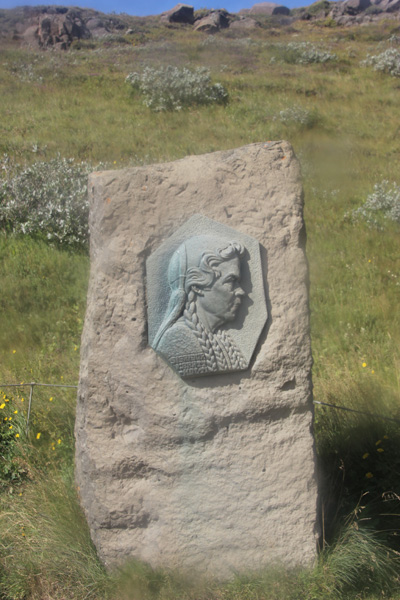 You will be drenched in mist before you can completely see the falls, and if there’s any sun, you will see rainbows everywhere you look. Adventurous souls hiked out onto the rocks beyond the lookout point. I didn’t want to do that for two reasons; 1) I had no glasses, and 2) photos would have been nearly impossible. As it was, mist already coated my lens. I was scared to use my phone camera, sure that the wind would snatch the mist-slicked rectangle out of my hands and hurl in into the golden torrent of the river, just as it had taken my glasses. All right, yes, maybe I was a little obsessed. 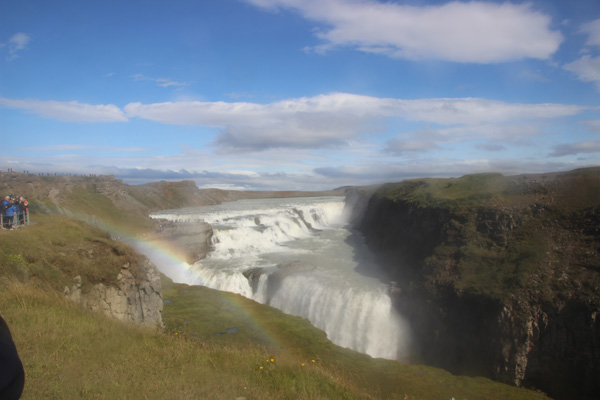 Gullfoss with a rainbow. 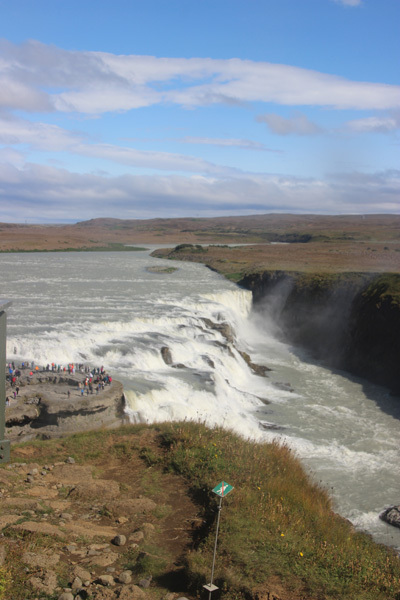 Parts, but not all, of this waterfall freeze in the winter.

It is nearly impossible to avoid pronouncing that as “geezer” and then make geezer jokes. A more accurate pronunciation is “gay-zir.” This active geothermal field has steam vents, mineral pools, hot springs and an active geyser called Strokker. As we pulled into the parking lot, our guide warned us not to climb under the barrier ropes and not to stick our hands or other appendages into the pools, which are very hot, and some of which contain acids and other corrosives. There were warning signs everywhere. One of my favorites was: “Be aware: the water is 67 degrees C and the nearest hospital is 64 kilometers away.” I guess they were trusting tourists to assess those facts and make a good decision. 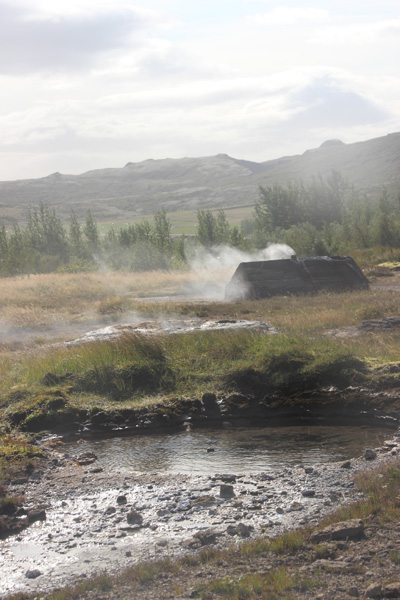 I also really liked this sign. I guess some people have confused mineral pools with wishing wells or fountains. 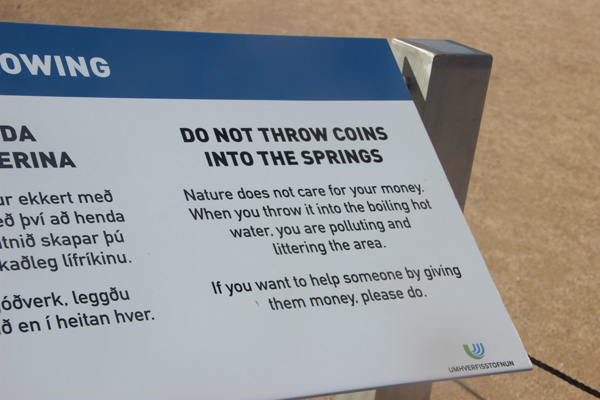 Nature does not want your money.

Despite the warnings, sure enough, while we were standing by one of the jewel-colored mineral pools a man ducked under the rope and stuck the tip of his finger in the water at the very edge of the pool. I would bet $100 he was from the USA. He didn’t shriek with pain, just ducked back with a smirky expression of part pride, part embarrassment, part surprise. Daniel turned toward us (away from the man) and said quietly, “I have to walk away now or I will say something inappropriate.”

I doubt it would have been inappropriate. 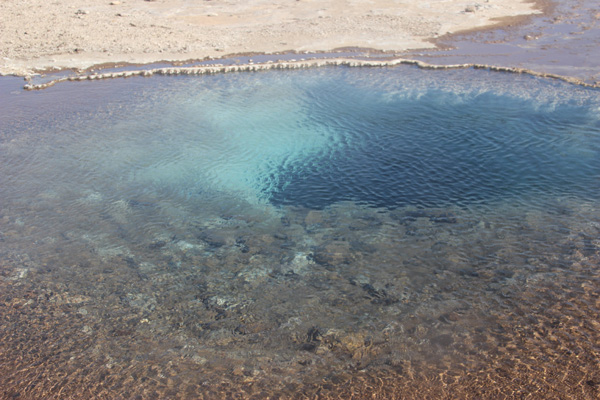 Geyers fall dormant for many reasons. An earthquake in the 1990 resulted in the dormancy of one of geysers here, but Strokker sends up a gleaming, steaming spout of hot water about every fifteen minutes. 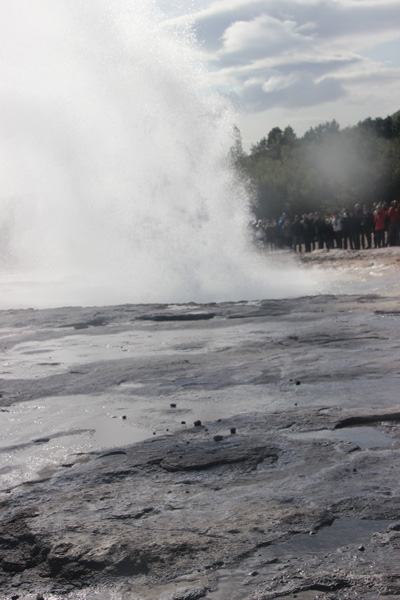 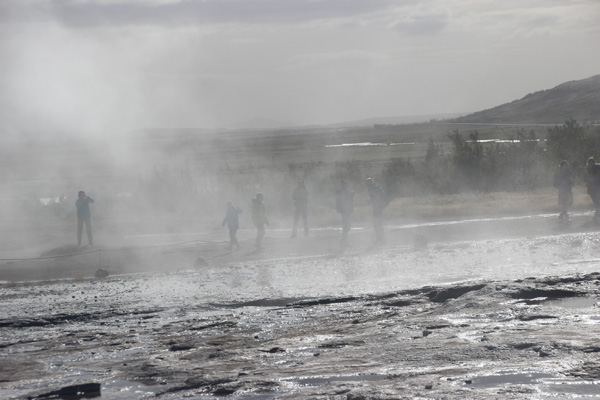 Daniel and I had discussed the phrase “tourist trap,” which he had adopted from the Cartoon Network show Gravity Falls. All three of the Golden Circle Tour stops have tourist traps – cafes, gift shops, free toilets. (The toilets in the National Park are pay toilets, and yes, they take credit cards.) Geysir has the bonanza of tourist traps, a huge building with an actual food court and a high-end “gift shop” with elite Icelandic name brands of sweaters, lap robes, jackets, jewelry, reindeer hide boots, gloves and hats. It was the Icelandic version of that street in Waikiki with Prada and Bulgari and all those name brand shops on it.

I couldn’t afford anything but I enjoyed looking.

On the ride back, our guide talked about Iceland. This post has already crossed the border into To Long; Didn’t Read so I will save his tasty morsels for another post.

It is possible to drive or bike the Golden Circle, although one couple I talked to said the GPS in their rental car got them lost. There is much more to see; more waterfalls and geothermal fields. I appreciated the amenities of the Gray Line tour, with its phone chargers and comfortable seats. Even nearsighted in Iceland, I enjoyed the sampler platter. 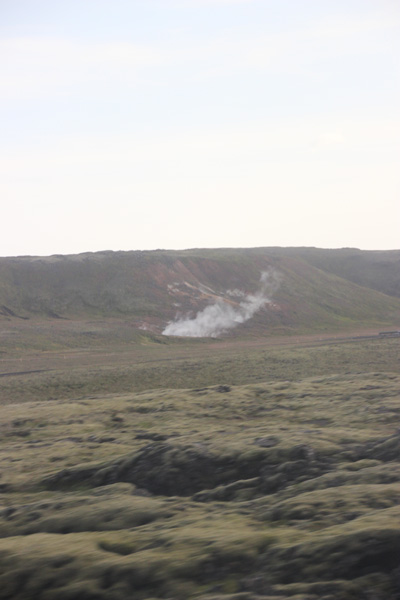 This entry was posted in View from the Road and tagged Continental Rift, Geyzir, Golden Circle, Gullfoss, Iceland. Bookmark the permalink.

2 Responses to The Continental Rift Ate My Glasses