Our Gray Line tour guide asked us to call him G, because his full name was difficult for tourists to pronounce. On our ride back to Reykjavik, he shared a few fun facts about this northern island nation. 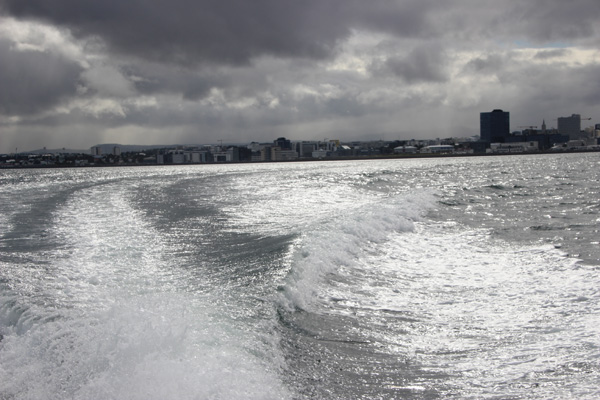 I did not grayscale this photo.

–Historically, Iceland was part of Denmark until 1918, although, as G put it, “Denmark paid no attention to us.” (Hurt feelings a little, G?) In the 19-teens, Icelandic students at university in Copenhagen got radicalized, came home and started a movement for independence, which was successful and basically peaceful. Iceland became an independent nation in 1918. Apparently Denmark really was just not that into them. Denmark’s loss, I’d say.

–In Iceland’s schools, all children learn Icelandic and English. Beginning in the fourth grade, they must learn a third language, either Swedish or Danish. Nearly everyone in Iceland is bilingual and many are trilingual. (We met a server at a restaurant who admitted with some chagrin that her Swedish wasn’t very good. She explained that to us in perfect English.)

–Icelandic is the oldest of the Scandinavian languages and the closest to Old Norse. 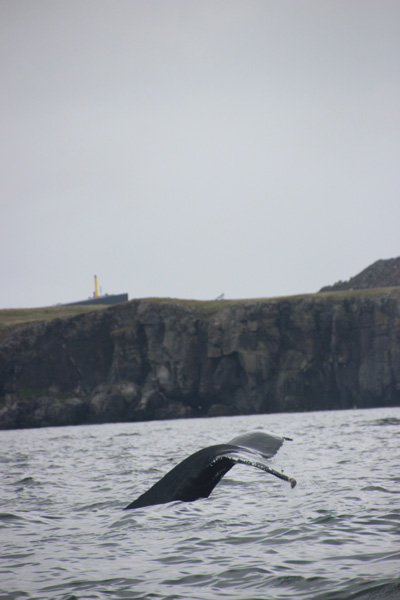 Whale tail, attached to a whale off the coast of Keflavik

–Every town and village has a public swimming pool complex and the pools are for more than exercise. Townsfolk gather there for social get-togethers, catching up, social events and meetings. The pools are naturally heated with water from geothermal fields.

–Iceland’s one indigenous predator is the arctic fox. I’m sure before settlers moved in, the fox lived mostly on eggs and chicks of the arctic terns and skua who nest there. When human settlers came, they brought sheep… and with the sheep, they brought mice. Mice breed prolifically, which from a mouse perspective is good because most mice don’t survive a season. As G put it, “Life is not easy for Icelandic mice.”

–There is an indigenous Icelandic falcon, and Icelandic ravens. (SEE: “Life is not easy for Icelandic mice,” above.) 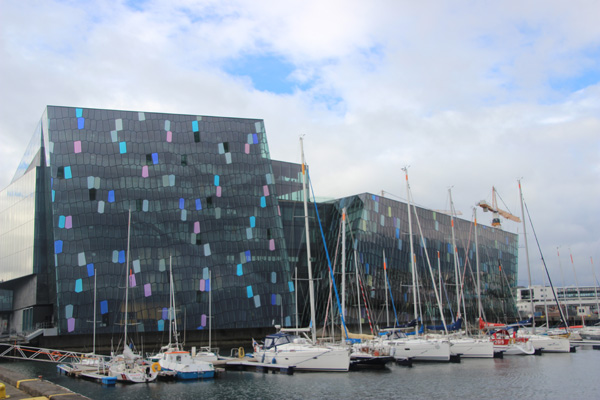 –Tourism is Iceland’s second largest industry. Fishing is its largest. Fishing, G says, will not grow, because the nation “must keep it sustainable.”

–Iceland is a NATO country, even though it has no army. It has a Coast Guard that has a military arm, and a ground-to-air monitoring system. Iceland did send military personnel to Iraq during George W. Bush’s “Coalition of the Willing.” They sent one person, and she was not a combat soldier (since they have no army); she was in signaling or navigation.

–Reykjavik gets its hot water from geothermal fields, which is why the water often smells like sulfur. It is mixed with glacial water so it is drinkable. Reykjavik also uses radiant heating, which mean hot water pipes under the floorboard of many of its homes and apartments… and uses a form of radiant heating underneath central roads in Rejkjavik, to keep them clear of ice and snow in the winter.

–G pointed out a snow-capped mountain on the horizon and introduced us to the active volcano, Eyjafjallajokul, which erupted in 2010, spewing a huge ash cloud into the air. Because of the prevailing winds, the ash shut down several European “hub” airports. Keflavik Airport wasn’t one of them. “American and European newsreaders could not say ‘Eyjaffjallajokul,’” he said, “so instead they called it E-15; E for the first letter and 15 for the number of remaining letters.”

–G talked a little, not much, about the great recession and Iceland’s banking crisis in 2008. It’s interesting for a couple of reasons. First of all, the bank shenanigans in Iceland devastated that nation financially. Secondly, people in Iceland actually went to jail for what they had done, including the Secretary of the Ministry of Finance. The banks were nationalized. When the government came up with an austerity plan that would reduce Iceland’s global indebtedness, the people of Iceland rejected the plan, because it wasn’t austere enough. They told the government to come up with a more stringent plan, and Iceland has paid off its global debts in ten years. 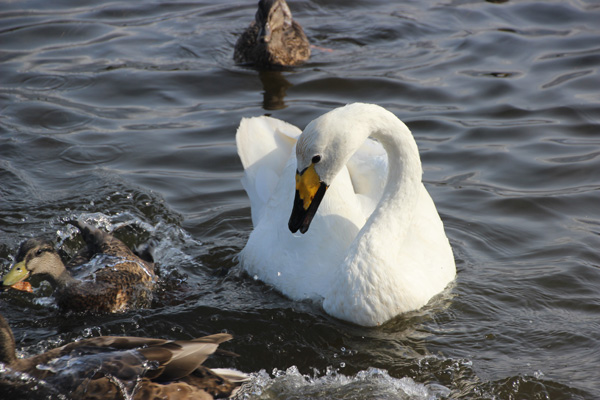 Swan on Lake Tjornin, AKA The Pond.

G’s job is tour guide, and of course he is working off a script or talking points, but I came away with the impression that he likes his job and loves his beautiful country.

This entry was posted in View from the Road and tagged Iceland, Politics, tour guide. Bookmark the permalink.