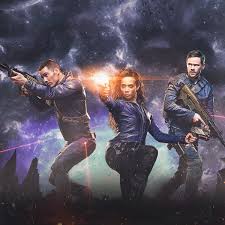 Basic Black and Projectile Weapons, it’s how we roll

You may have gathered that I like the Syfy show Killjoys. I wrote about hackmods; I wore a Feminist Killjoy T-shirt at HawaiiCon. (A guy said, “It’s nice to see the RAC represented.”) Killjoys is a space opera conceived by Michelle Lovretta, the inventor of the quirky fantasy show Lost Girl. It shares some philosophy with Lost Girl, and some sensibility. And it’s fun.

I called it “space opera.” Killjoys is set in a planetary system in the “J star-cluster.” There are rocket ships and pulse weapons, AI ships, and colonized moons. No one really talks about how fast the ships go or where they go (there may be one or two hand-waving mentions of FTL travel). None of that matters because this isn’t “hard” science fiction. That’s what “space opera” is; the term grew out of an old TV phrase, “horse opera” (which might have even come from the much-older expression soap opera, still in use today)… horse operas were westerns. Space operas have space ships and fancy weapons, usually take place on other planets, and are not at all worried about the “how” of being there. They are usually military, often capers, and basically provide action adventure in space. Killjoys honors that lineage and uses a little bit of each subgenre.

It’s fun, it’s actiony, and it’s popcorn-worthy, but it isn’t shallow. Killjoys asks a lot of questions about inequality and privilege. Capitalism comes in for a thorough critique in this show, and that critique is a large part of the plot and the story.

The main character of Killjoys is Dutch, a Reclamation Agent (bounty hunter) and part of the Reclamation Apprehension Coalition (the RAC). Dutch is a bit of a mystery. She says she was raised in a harem, and is the daughter of an impoverished aristocrat in a remote system at the “end of the J,” and to our surprise, this turns out to be true. Dutch, who was born Yalena Yardeen, is also an assassin. Dutch has two partners, brothers Johnnie and D’avin Jacobuis. They berth their smart ship Lucy on the moon of Westerly in a planetary system called The Quad; a large planet with three habitable moons. Leathe is a garden planet; Westerly has been strip-mined and is definitely the Bad Part of Town, and Arken, although technically inhabitable is (wink, nudge,) empty. The host planet is called Creche, inhabited by the Nine Families, who together form a corporation called… The Corporation. Creche’s ice caps are melting at a fast rate and land on Creche is disappearing; and the Nine plan to do something about that, mostly by ignoring contracts and deals they made generations earlier. Because they’re the Nine, who says they have to honor their own treaties? 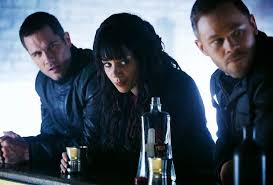 “Did I mention we killjoys drink? A lot?”

Like Lost Girl, the center of the on-moon action in Killjoys is a bar, the Royal, owned by Pree, elegantly played by Thom Allison. Dutch has befriended a Scarback monk who is also a revolutionary, named Alvis Akari, and Season One concentrates on unrest on Westerly and an attempted miners uprising. There is a deeper, multi-season story at play that involves Dutch’s scary tutor, Khylen, a rank of RAC agent called a Level Six (RAC ranks only go to Level 5); Red 17, and a neon-green goo.

Apart from a complicated, interesting story, Killjoys has a lot going for it.

Characters are well-drawn, and rather quickly drawn. In the pilot, the original pairing is techno-boy Johnnie and Dutch, but Johnnie darts out into metaphorical traffic to go after a mystery warrant, which is his long-lost brother D’avin. D’avin and his own secrets join the partnership. I didn’t like D’avin that much at first; he seemed like a stereotypical character, but then I realized they were writing him funny. Johnnie (Aaron Ashmore) is the quippy, snarky one-liner brother, Luke McFarlane, who plays D’av, is master of the deadpan delivery. In Season Three, when talking about baby names (long story) he says to his nemesis/baby-mama, “How do you feel about apostrophes?”

After a nasty fight with a green-goo-laden Level Six who explodes (eeuw) D’av says to Dutch, “Remember when we just used to catch badguys? Yeah, that was fun.”

Johnnie loses some of his idealism as the story progresses. He is still the “good” brother, but he’s made some choices; he’s done some things. And I don’t think he’s done yet. Dutch has tried to leave her assassin past behind her, but she is realizing that she may need to draw on those skill if humanity in the J system is going to survive.

Characters like Pree, Pawter, Turin and Delle Seyah Kendry are all well-developed, complicated people who don’t always fall into line when Dutch wants them too. Even Dutch’s smart ship, Lucy, has an AI of her own and chooses to exercise it.

The show gleefully plays in anachronistic pop-culture references and makes them work. In the apostrophe conversation I referenced above, D’av says a moment later, “Fathers have rights too.” Dutch and D’av call each other “special snowflakes.” It’s all done knowingly, and it works. The show also uses the word “joy” for “money” which goes a way to explaining the title. 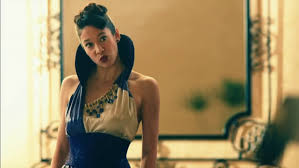 Generally, Syfy does not seem to have invested a boatload of cash into the production values of Killjoys, but the production makes that work. Westerly is grimy; most “other planets” are the same desert-like location. (They clearly used a quarry for one exterior and that was simply awesome.) Where the show chooses to spend money is on costuming is mostly for Dutch and the evil Niner Delle Sayah. This choice completely pays off. Usually, Dutch is running around in standard woman-warrior black, flipping badguys, doing spin-kicks, taking the one-in-a-million shot, but several times a season she “goes undercover” in some glamorous slinky affair. And it all works. With the introduction in Season Two of another female adversary, Aneela, we get a whole different wardrobe look. They all work. They’re all fun.

The Corporation is corrupt and has been for generations. The RAC has held itself as “neutral.” “We take no bribes, we take no sides, the warrant is all” is their motto; and this is a complete lie. The RAC is as deeply compromised as the Corporation, and our Killjoys discover that pretty quickly. The multi-season story is about memory, about being co-opted, and about fighting for personal freedom. This may be Dutch’s personal story, as she struggles reconcile her current life with her past identity. This may be the struggle of the miners on Westerly; or the hackmods who have been enslaved and had their bodies and brains modified without their consent. It’s the struggle of anyone who has ever questioned the idea that something is right just because it’s been that way for a long time.  The show is all about these questions, but it doesn’t sledge-hammer you.

I thought the incidental music in the first season was intrusive, but by Season Two I was loving how they used song, both instrumental and voice, to enhance the story. A real treat (they’ve done it twice now) is letting Thom Allison’s character Pree sing. He has a gorgeous voice and the character of Pree melds perfectly with these choices. The “bar music” we’ve heard in the Royal has mostly had a folk-music vibe, which fits impoverished miners and taps into a cultural theme (Scottish music making the journey to Prince Edward Island, Nova Scotia and the Appalachian mountains). Allison can sing pop or he can sing folk and he does both. Beautifully.

Killjoys has been renewed for Season Four and Season Five. Right now it’s on hiatus, so it’s a great time to watch it On Demand. Usually it is on Friday nights. Check it out.

Here’s the imdb page, and here’s the wiki.

This entry was posted in Movies, TV Shows. Bookmark the permalink.