Orphan Black; Which Sestra Had the Greatest Growth? 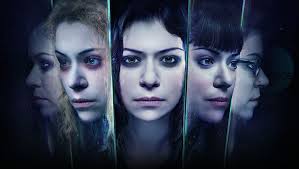 Orphan Black completed its run with the Season Five finale. The showrunners and the astonishingly versatile Tatiana Maslany managed to complete the story, wrap up loose ends and bring us out on a note of hope and female autonomy. Along with The Expanse, Orphan Black is the best science fiction show on television. Now that it’s over, I find myself ruminating on just which of the five women whose lives we followed – five “genetic identicals,” clones – grew the most over the course of the show.

To write this column I am going to talk about everything that happens right up to the final few minutes of the final episode. Spoilers abound so if you haven’t seen the fifth season yet, you may want to hold off on reading this.

Orphan Black started us off with Sarah, British-Canadian; a grifter, a scrapper, one step up from a street kid. Tough, savvy Sarah is returning to the home of her foster mother, Mrs S, with half a brick of cocaine she stole from her boyfriend. Her goal is to sell it, snatch her daughter Kira who is in Mrs. S’s custody, and make a run for it, setting up a new life for herself and her daughter. In the first two minutes of the show, we get the feeling that “making a run for it” is what Sarah does best. 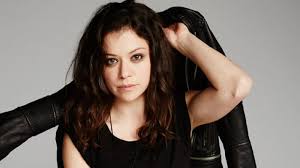 On the train platform in Toronto, Sarah comes face to face with a woman who looks exactly like her, seconds before the woman throws herself in front of a train. Stunned but still opportunistic, Sarah snatches the look-alike’s purse and bolts. Soon she has roped her foster-brother Felix into a scheme to impersonate the dead woman and clear out her savings account. She has reckoned without a couple of facts; Beth Childs, the dead woman with her face, is a homicide detective, and one in trouble with Internal Affairs for a bad shooting. And, Beth has a live-in boyfriend named Paul.

There is more of a mystery with Beth; specifically, the women who keep calling her, and in short order Sarah discovers that there are several women who look like her. She –and we—meet the sisterhood of the Leda clones; the main characters of this twisty, crazy, suspenseful show.

In addition to Sarah, the primary Ledas are:

Alison Hendrix, a rigid, controlling suburban housewife and soccer mom; a woman who is perfectly turned out at every moment, who has a frighteningly well-organized crafts room; the mother of two adopted children; a secret boozer and pill popper who seethes with rage at never having been good enough. 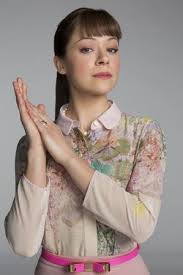 Cosima Niehaus, a gifted scientist from the U.S. with a degree in biology, getting her doctorate in evolutionary development (evo-devo); a lesbian with an open heart and a compassionate, non-judgmental nature. Cosima is sick, with a persistent cough that is getting worse. 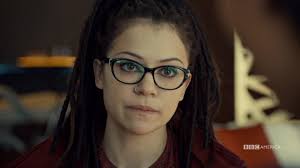 Helena Black ; a Ukrainian woman who was raised as an assassin. Helena is feral; there are only two things she does well; kill people, and interact with children. 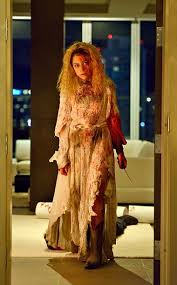 Helena. Yes, that is a bloodstained wedding gown.

Very soon another Leda appears on the horizon; Rachel Duncan, a Leda clone raised in the bureaucratic bosom of the Dyad Corporation, the business-mask of the secret group who created the Ledas and another line of clones, the male Castors. Rachel is not and will never be part of the sisterhood. Her early childhood was idyllic, raised by two scientists, Ethan and Susan Duncan. When they were killed in a fire, she was “adopted” by DyadCorp, with Dr. Aldous Leeky as a proxy parent. Rachel was a “self-aware” clone; she knew what she was and that she was part of an experiment. She has been groomed to be a manager and a CEO and has risen to prominence in Dyad in the first season of the show. 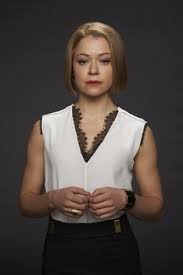 As this group of Canadian Ledas struggle to figure out what they are, Dyad rushes to contain them, or, if that isn’t possible, eliminate them. Dyad is fascinated that Sarah has a child, because the Ledas were developed to be sterile. Then they discover that Kira has some unusual abilities, and she becomes the prize the factions fight over for the next four seasons. The “sestras,” the Ukrainian word for “sister” will fight Dyad; a fringe group called Neolution; the religious Prolethians; the Castors and each other for their freedom and Kira’s.

Each sestra has to grow and change, or risk failure. Who grew the most? In Hawaii, I discussed this briefly with Marilyn Hedtke, who felt that Rachel did the most growing. I certainly saw how Rachel had grown, but I disagreed at the time, because I was measuring her growth in terms of how much farther Rachel has to go in terms of redemption. Rachel did a lot of damage, and when the show ends, she has a lot to make up for.

I thought the sestra who had grown the most was Helena, who changes from a savage killer to a loving sister and mother who is still a… well, still a savage killer. Helena will always be a savage killer, but she has learned to trust. Helena is happy at the end of the show, a thing we could not imagine her being in Season One when we first meet her.

In the final act of the final episode, it seemed like Sarah had changed the least. The Ledas have won; they are free of all their enemies. Kira is free to live her life, and she has cousins now, including the young Leda Charlotte. Sarah, planning to take her GED and become a productive member of society, instead blows off the test. She has put a For Sale sign on the lawn of Siobhan’s (Mrs. S’s) house which she’s inherited. All the signals point to Sarah doing what she does most easily; making a run for it.

At Helena’s baby shower, though, Sarah comes clean with her sisters. She admits she ditched the test and lied to Kira about it. “I’m still a shit mom,” she says, echoing a very important line that Helena uses not once, but twice, with the psychopathic scientist Virginia Coaty. Now that there is no one left to fight, Sarah doesn’t know what to do. She hasn’t let herself mourn the loss of Siobhan. In that moment, however, Sarah is doing the thing she has never done before; she is reaching out to her family, being vulnerable.

Cosima is a vital player to the plot of Orphan Black because she is the scientist who has come the closest to curing the disease that kills both the Leda clones and the Castor clones. As a character, Cosima demonstrates nearly zero character-growth. It sounds paradoxical, but what Cosima has to do in the show is stay alive until she can save her life. In terms of emotional growth, Cosima is a plot engine more than a character.

Within Cosima’s story arc, though, the Neolutionist scientist Delphine faces challenges on nearly every front; from her sexuality to her own autonomy. When we first meet Delphine, she is prostituting both her body and her intellect to Leeky and Neolution. At one point, she ousts Rachel from the CEO chair of Dyad; and shortly after that she betrays Cosima. And shortly after that she is shot. Delphine’s resurrection and growth happen mostly in the last two seasons and she credits Siobhan with her growth, telling Sarah, “[Siobhan] taught me how to not be afraid.”

And then there is soccer-mom-from-Hell Alison, and her husband Donnie. I was often frustrated with the Alison storylines, even while I was doubled over gasping with laughter. Alison’s marriage to Donnie is flat and insincere until circumstances force them to get authentic. It’s sad that those circumstances involve killing Dr. Leeky and burying him under the floor in their garage, but sometimes that’s how things go. This magical moment over a jackhammer bonds Donnie and Alison, and Donnie’s connection to a pregnant Helena later in the show helps him emerge as a real, nuanced person and a loving husband. I did wonder if the showrunners did so much with Alison because Tatiana Maslany and Kristian Bruun, who played Donnie, had such great chemistry. Alison bottoms out, has revenge sex with another husband on the street, lets a rival wife on the street die in front of her, goes into rehab, relapses, becomes a drug dealer and a member of the school board (those two in the same season); and at the end is oddly at peace with herself, coloring her hair purple and getting rid of her crafts room so she can write music and “live deep.” Perhaps this is the greatest growth, but somehow, I never quite believed it. With Donnie and Alison, the next catastrophe is only a breath away.

It seems like detective Beth’s growth arc ended in the first five minutes of the series, but in Season Four, the story circles back around to the police detective, and we find out that her fatal act is not bred of despair, but of a desperate self-sacrifice, one that Sarah unintentionally ruins with her impersonation. 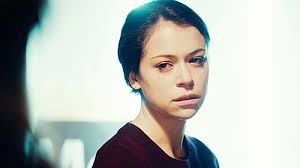 I should mention that there are several other Leda clones who make an appearance. Maslany, in addition to being an actress capable of deep emotion, and startlingly versatile, lent herself to stunt casting and there was a time when it felt like the show runners were saying, “How many clones can we add?” The majority of them were on for one or two episodes. The character of Krystal showed character growth, definitely.

Which leads me back to the essential five; Sarah, Alison, Cosima, Helena and Rachel. By now, looking at where they started to where they ended up, I see the argument for Rachel. Rachel will never be part of the sestras. The wounds she has caused, and her own wounds (literally, a lost eye and brain damage) are too deep. Rachel, raised up to be the token corporate clone, had the farthest to fall. In Season Five, from the exalted expression of ecstasy on her face when she hears the words, “Mr. Westmorland will see you now,” to the moment in her office with the stem of a martini glass, Rachel’s plunge is the deepest, but it isn’t a fall, it’s a dive. Rachel finally, literally, sees the truth of Neolution, of the men who have lied to her, shaped her and controlled her. A captive Kira asks her, “Who hurt you?” Rachel answers, “All of them.” When she acts, it isn’t a fall. She chooses her own actions to be free of them.

Rachel still has the farthest to go. Did she come the farthest? Cosima lives, Helena, Alison and Donnie have twin boys to raise, and Sarah is letting herself, slowly, put down roots. Rachel drives off in an Uber, but not before making a gesture of redemption to Felix, one that will save lives. So, it is Rachel? I think maybe it is.

This entry was posted in Movies, TV Shows. Bookmark the permalink.