An Evening of Scary Stories

Friday, October 27, Copperfield’s in Petaluma hosted a “scary story night” book launch of Word Horde’s latest anthology, Tales From a Talking Board. The fourteen stories (nearly) all contain some form of divination but, as the title implies the most common tool featured is the spirit board or the Ouija board. You can read my review of the book and my responses to some of the stories at Fantasy Literature. 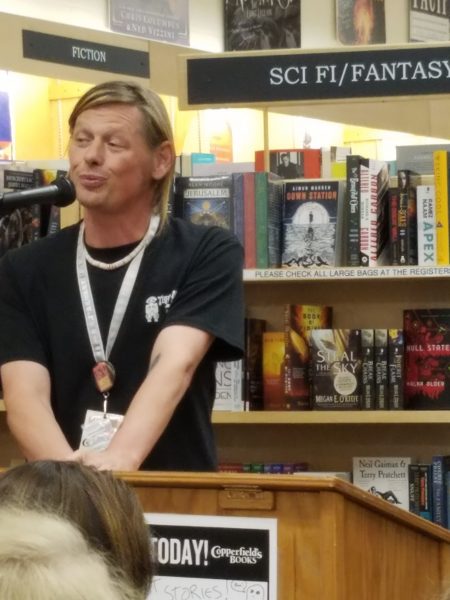 Ray started off the evening with a warm Copperfields welcome.

The Petaluma Copperfield’s excels at speculative fiction events. This one drew a good-sized crowd, with a few folks in costume. (I was in quasi-costume.) Three writers from the anthology read from their works, while Word Horde Editor-in-Chief Ross Lockhart shared the classic story “King of the Cats” and read from the book’s foreword.  When the formal readings were done, two mediums demonstrated the spirit board for us, with mixed results. Let’s just say no skeptics in the room experienced a conversion, or at least not yet. 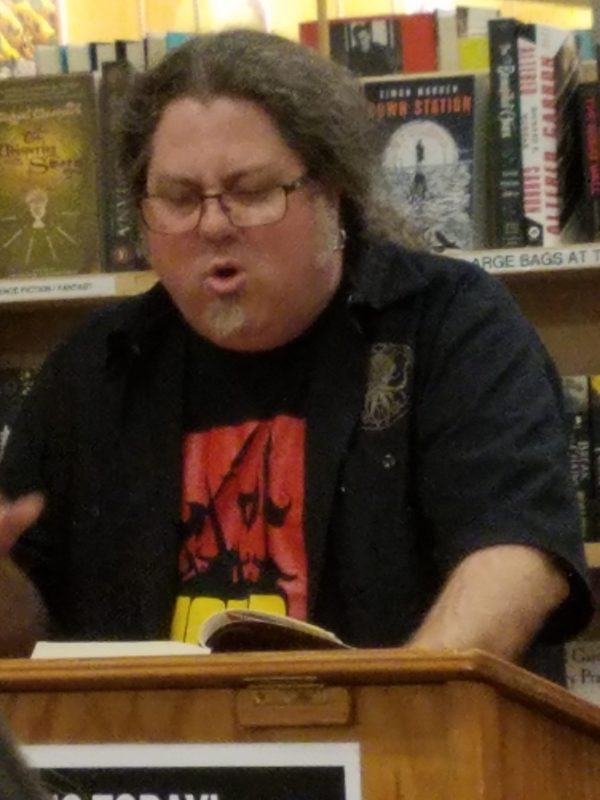 Ross shared “King of the Cats” and introduced the night’s writers.

There was also a fund-raiser for fire relief. One dollar purchased a raffle ticket and one lucky person would win this spirit board. This is another reason I like Copperfield’s; they are part of the community and they give back, in large ways and small. 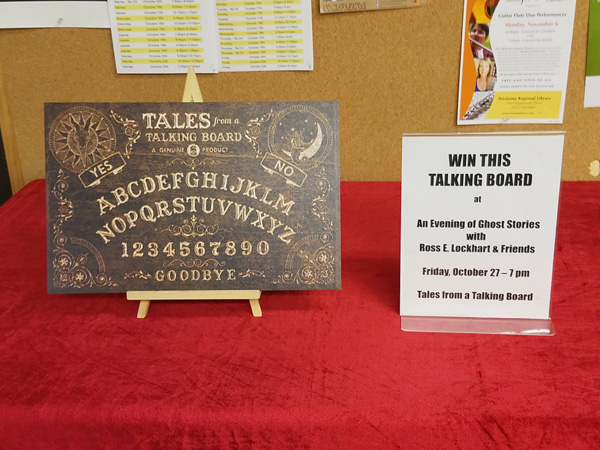 I would have gone to the event anyway, but I had really hoped David Templeton would be there. He wrote my favorite story in the anthology. Templeton is a local theater critic, lifestyle journalist, playwright and writer. Unfortunately, the catastrophic fires from two weeks age meant that the opening of Templeton’s play had been rescheduled to the same date as the reading. That is one of the better excuses for not showing up.

Amber-Rose Reed was up first. After Ross finished his detailed history of the spirit board, Reed stepped to the podium and said, “My story doesn’t have a spirit board.” Her tale, “The Empress and the Three of Swords” instead focuses on Tarot, as you might have guessed from the title. Reed’s piece always felt more like a vignette than a full story to me, but it was beautifully atmospheric. I didn’t think to ask her if the woman character referred to as “Gypsy” in the story was meant to be Lady Frieda Harris, who created the Book of Thoth deck for Aleister Crowley. 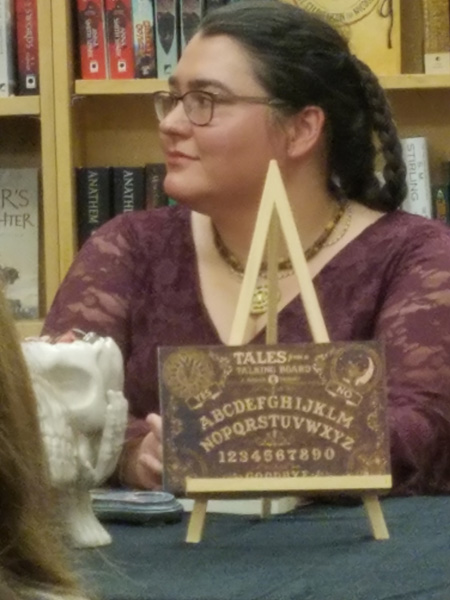 Amber Rose Reed just before she got up to read from “The Empress and the Three of Swords.”

Reed was not exactly in costume, but her clothing and hair did evoke the late Regency/early Victorian styles in vogue in Britain at that time. 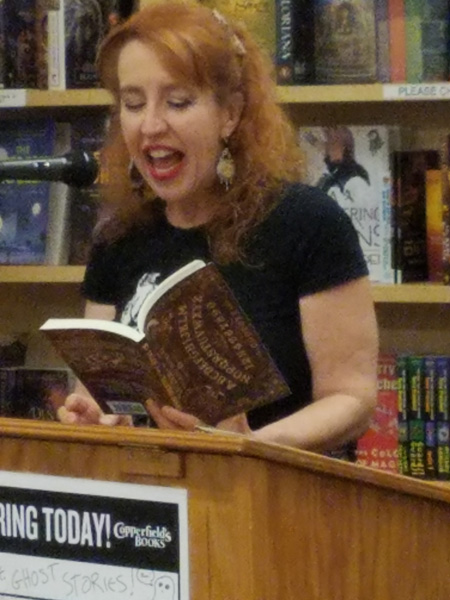 Anya Martin reading from “Weegee, Weegee Tell me Do.”

Anya Martin read from “Weegee, Weegee, Tell Me Do,” her charming 1920s period piece that encompasses spirit boards, spiritual possession and vaudeville. Martin is a dynamic reader, full of vitality. Like Reed, she stopped at a natural stopping point, to build up the suspense (and book sales). I wished she could have read another two pages, because the scene she stopped short of featured the character I liked the best, the “Great Marie Cahill.” The song, it turns out, existed.

David James Keaton read last, performing “Spin the Throttle.” Like the other two, Keaton is a good reader and he brought out the rhythm of his story, about a group of partiers who are on a “party truck” speeding through the night. The story gets stranger and stranger and it becomes clear that for these folks, the party never ends, or at least never ends well. The remodeled fire truck that is the party vehicle features a pool or a hot tub in the back, and a floating booze bottle forms the spinner for a strange game of spin the bottle/truth or dare. Keaton’s line by line prose is creepy, graphic and often witty. I didn’t care for this story simply because it is a type of story (sinners are going to hell and don’t know it) that I’ve read before and it just doesn’t work for me. Certainly hearing the creator read from it improved it for me, but it also seemed like Keaton read a lot longer than either of the women did. I have so scientific basis for this. I don’t think there was a stated time limit, and even if there had been, they were short one writer, so each person could have read longer. While Martin and Reed’s stories had definite stopping places, pauses for the reader to catch a breath, or for a scene to change, the pace of Keaton’s story matches a hellish truck tearing through the dark, faster and faster. There are very few natural breaks. And maybe it just seemed longer because it wasn’t one of my favorites. 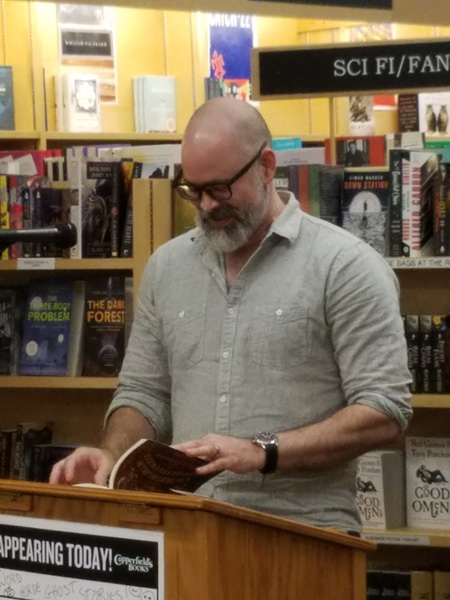 After the readings were finished, Sarita and Katie came up from the audience to demonstrate the spirit board. The spirit board created for the book is lovely, a re-creation of an historic board. At first the two women worked from the table, but folks in the audience couldn’t see. They turned around the podium and used that. The gravity was definitely an influence.

For the first question, a man in the front row called out, “Who made it all go wrong?” That’s a pretty broad question. The women waited, and the board spelled out E… G…. G. Egg. Petaluma used to be an egg production center, but I don’t see how eggs are responsible for whatever’s wrong.

(Unless it was the first part of a message from the Daleks…? “Eggs… stir… min… ate?”) 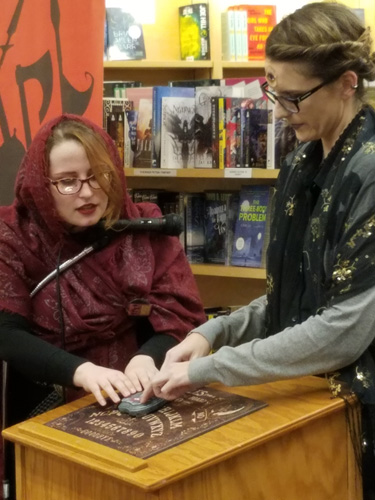 Two mediums work the talking board, and get “eggs” and “GN.”

I forget what the second question was, but then it seemed we were done. Ross asked for a third question. I raised my hand asked who Special Counsel Robert Mueller would be indicting. The answer seemed to be “G… N.”  The planchet slipped down toward the numbers and I wondered for a minute if it was going to designate the G8. Instead, it motored into a corner and finally off the board, signaling that the spirits were gone.

Shortly after that, we were too. I got some autographs. In addition to Tales from a Talking Board, I bought the wonderful-looking new John Crowley book, Ka. Talking spirits? How about talking crows?