All Hallows Read After Action Report

Trick-or-treaters started earlier than usual on my street; the first ones showed up at 5:30 and the sun hadn’t even set yet. They were tots, and I think the parents were hoping to keep to a semblance of a routine.  It meant that I didn’t even wear my sorta-Professor-McGonagall costume (so it’s good I got to wear it Saturday to a party.) 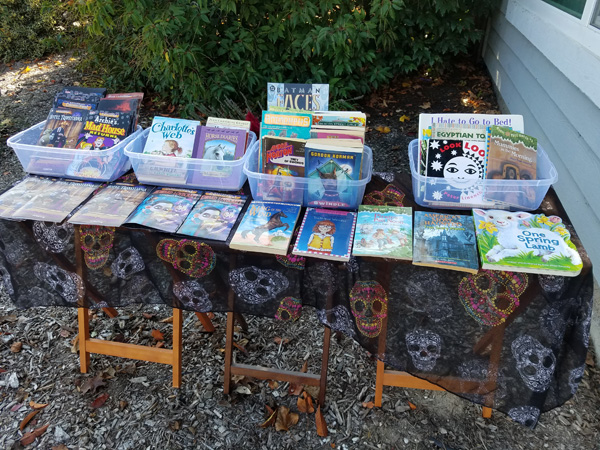 I only had about 35 books to give away this year. In some ways, this year was a book-fail for me, because I lost track of time. The fires absorbed all my attention and I lost an entire week, almost literally. I made a run to Sutter VNA Thrift, and Santa Rosa Goodwill, for books, and I was in Frantic mode, not Reflective mode. I rounded the selection out with many mini-comics from Gryphon Nest Comics and Games, here in town.

The mini-comics were quite popular with some parents, who actively steered the kids toward them. “Look at these little comic books! These are fun.” After watching a couple of groups I figured out the motivation. If the child chose a book, they immediately handed it to Mom or Dad to carry. The mini-comics, though, would fit in a trick-or-treat bag. Mystery solved.

(The mini comics were popular.)

At least two groups of kids never came up to the door. They went right to the books. And in one group at the door, a boy dressed as “a Professor,” wearing a tweedy jacket, with a pocket protector, horn-rimmed glasses and a Rubik’s cube, said, “I’ve heard this is the house that gives out books.” I directed him to the books after dropping a mini KitKat bar into his bag.

As with most years, there were lots of kids.

There were lots of firefighter costumes this year, especially for younger kids, and they were as cute as all get-out. Of course the choice carried some emotional weight too, in light of recent disastrous events.

Two tiny girls, in different groups, were dressed as butterflies.

Boys were mostly zombies, ninjas, and (and I quote) “army guys.” I had a few home-made monsters.

Girls grabbed the horse books. (Duh.) Artemis Fowl was recognized by both sexes, and the Eoin Colfer books went fast. I had a few board books, and parents picked those up. My favorite board book story was that of the one of the butterfly girls. She was about three. I told her dad that there were some books. He scooped her up and they went to take a look. “Oh, look,” he said, “here’s one called I Hate to Go to Bed. That’s for you!”

One dad said, “Ohh! Andre Norton!” and I could hear the nostalgia in his voice.

“King of the Wind is not about a horse,” one boy said.

Every Halloween, three stories come up in the news and on social media.

I think some of these are fake stories. (I do think Donald Trump Jr.’s stupid tweet was really him, but I suspect he was trying to do his dad a favor by drawing some fire.) For the record:

I put zero drugs, poison, needles or anything in my candy, which is individually wrapped anyway.

Our neighborhood is at the edge of the town, and to the west the areas is largely rural. Kids live on streets where there is maybe one other house. For as long as I can remember, people have driven their kids into our neighborhoods to trick or treat. As this neighborhood cycles through its life-span, for a six-or-seven year period we had older childless couples on the street. “Our neighborhood” trick-or-treating would have been pretty boring for those years. Now we have some kid-centered families again. Our neighborhood decorates; we’re away from any main thoroughfares but we’re still centrally located. In other words, we’re a great Halloween neighborhood.

The people who complain about kids from “other” neighborhoods often mean either 1) poor neighborhoods, or 2) neighborhoods where dark-skinned people live. For me, if you’re from those neighborhoods, come on by on Halloween and I will offer your kids candy and books until I run out.  It’s a bit hypocritical that the one or two people who always complain are the first to look online or in the local newspapers to identify the “best Halloween neighborhoods” for their kids.

Teenagers… I had two teenage boys, in great costumes, standing at the end of the driveway while a flock of little kids came to the door. When the little kids had their treats, I said, “Do you guys want candy?” They shook their heads and one said, “We’re supposed to be the adults.”

The holiday is over, and already it’s car-Christmas. I am holding fast for my favorite holiday of the year (even if its reputation is more and more tarnished) Thanksgiving.

This entry was posted in View from the Road and tagged All Hallows Read, books, Costumes, Halloween. Bookmark the permalink.