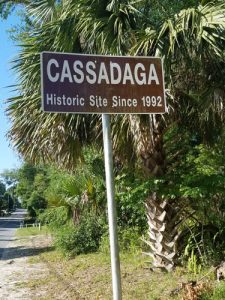 Basically, this is how you find the camp.

It’s not that Cassadaga, Florida, is hard to find. The directions from the Hotel Cassadaga website, plus Google, were clear. It’s just that it’s small and it doesn’t show on any maps. I think, but I’m not sure, that it is technically part of Lake Helen. Cassadaga is an Historic District, and before that is was a camp, never technically a town.

I felt welcomed as soon as I realized that the approach was named Marion Drive, although of course throughout the south when you see things named Marion, they’re for Francis Marion, the revolutionary war hero called the Swamp Fox. 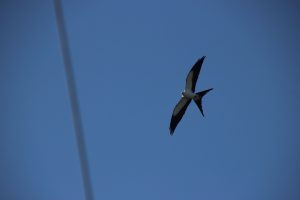 As I got out of my car I heard a kite screaming in nearby trees. And then there it was, a Georgia kite, greeting me.

As you drive into Cassadaga two buildings dominate. The hotel is a two-story, late 1920s stucco building with deep porch and some stained-glass features in the windows. Across the street to the north, the Southern Cassadaga Camp Association Office and Bookstore has the look of an earlier era, white clapboard, a wide wrap-around veranda and a hipped roof of corrugated tin. It reminded me of some of the old sugar plantation buildings I’ve seen on Hawai’i. East of the camp gates the buildings continue a vaguely island theme, especially in color choices; yellow, purple, blue, pale green, white and pink. Houses on the north side of the street look like homes from the early 1900s, with one or two mansions. 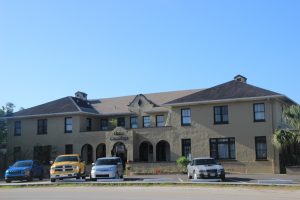 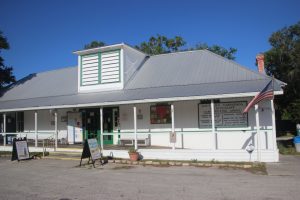 The most “imposing” building is not visible from the street and it’s the George Colby Memorial Temple. It’s not as graceful as the hotel or other camp buildings, but it is the center of the spiritualist activities and weekly services are held there on Sundays. 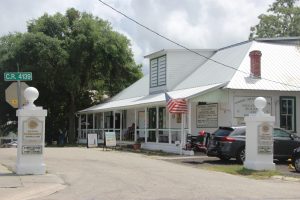 The camp gateposts. The camp area is open to the public from dawn to dusk.

Cassadaga Road is the north-south divider between the camp and the rest of the village. West of the road, marked by the gateposts, is the camp, which got its charter in 1894 and is still mostly owned by the Association. The camp was founded by George P. Colby, who was born in Minnesota. He became a medium, much to the chagrin of his Baptist parents, and a spirit guide told him to go to Wisconsin and meet a man named Giddings. The two of them were to go to the south and found a camp in a place “of interlocking lakes and seven hills.” Off they went, and several years later Cassadaga was born. 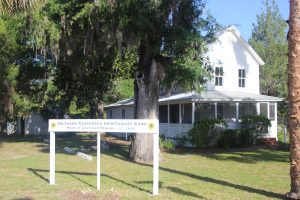 Oddly, this building is on the east side of town.

Colby had tuberculosis, so the climate was better for him, and the church says that he cured himself by drinking water from a spring he discovered, and inhaling pine smoke. Soon Cassadaga became a winter gathering-place for spiritualists, especially those from Lily Dale, situated in upstate New York. 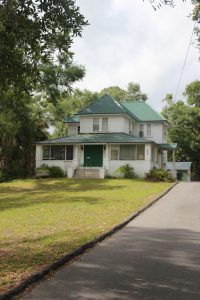 Summerland House contains the administrative offices of the Association.

The hotel adds another slight complication to the split between the camp and non-camp psychics. The hotel was built by a spiritualist family on camp land, but the original building burned in 1926. The Association raised bonds to rebuild and created the building that stands there today. Started in 1927, the new hotel was ready to open in 1928. In 1929 a stock market crash signaled the start of the Great Depression. Many of the spiritualists were wealthy northerners and speculators, and soon the Association was unable to meet their bond obligations and were forced to sell the hotel. The hotel is not owned by spiritualists, but it is on camp property, and it offers its own slate of psychic readers. Life can get complicated. 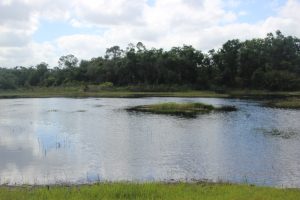 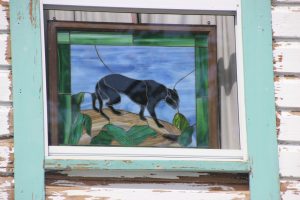 My favorite place in Cassadaga was Seneca Park, especially Spirit Pond, where I felt a sense of peace and groundedness as soon as I stepped foot on it. The pond seemed especially beautiful. My second favorite place, other than the hotel itself, was the Haunted Museum, run by a pleasant Florida man named Varney, who is its founder. The museum is small, half serious historical information about the area and paranormal doings throughout the world and half Halloween-night joke-spookiness, but he has only been open since February, 2018. More on the museum later. 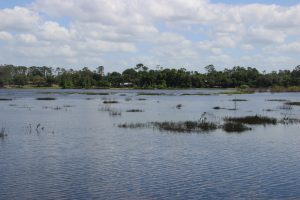 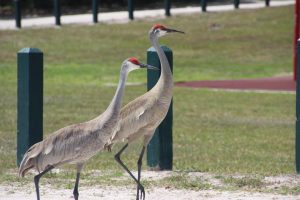 Sandhill cranes, who pay little attention to tourists with cameras.

The camp/village is sparsely populated and quiet, exuding a sense of peace, a meditative vibe… at least on weekdays. The weekends, well, that’s another story.

This entry was posted in View from the Road and tagged Cassadaga, Florida, Florida Trip, ghosts, psychics, spiritualism. Bookmark the permalink.