The full name of The Haunted Museum is C Green’s Haunted History House and Museum, and it is indeed part haunted house and part historical archive. The place has been open since February, 2018, and frankly I think it needs, or at least deserves, more space. 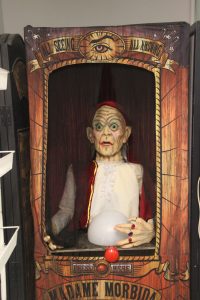 They’ve used dividers and bookshelves inside the converted house’s rectangular space to create smaller rooms and the feeling of a maze or labyrinth. That’s neat, but the blaring of the talking exhibits, like the charming Madame Morbida, come through the dividers. It’s distracting. 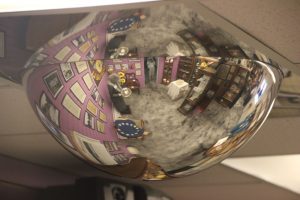 The Haunted Museum can be disorienting.

The exhibit has some good information on George P. Colby and the founding of Cassadaga. They have a few items from New York and a display about the Fox Sisters who are credited with popularizing spiritualism in the USA. Years after the girls gained fame as mediums, Margaret confessed that they created the rapping and tapping people heard at their seances by cracking their toes much the way some people crack the knuckles in their hands. Years after that revelation, Margaret recanted the confession and lived out her life as a spiritualist. 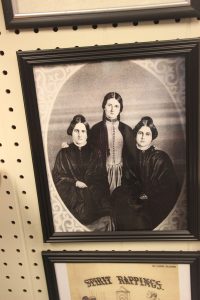 A portrait of the Fox Sisters.

I assumed that the friendly and knowledgeable young man with the bushy chin-beard was Varney from the business card (“Ask for Varney”) but I didn’t confirm that. I’m going to call him that for the sake of convenience. He told me the museum has some haunted dolls that are kept away under lock and key until they can create an adequate space to display them. The place that gives him the shiver, he said, is the seance room, which includes George P Colby’s seance table and a hand-tatted doily made by one of the Alderman family daughters. Varney says some accounts from Cassadaga say that the daughter continued to commune with Colby after his death.

He told me the way to the cemetary between Cassadaga and Deland, where Colby is buried. I couldn’t find the headstone, but that’s on me, not him. “It’s fifteen feet from the Devil’s Chair,” he said, “Which is just a big red brick chair.” 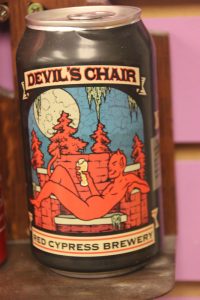 The Devil’s Chair is just a brick chair in a local cemetery, but anything for a beer, right?

Actually, there are two red brick benches in the cemetery in question, but only one is on top of the hill and only one is the Devil’s Chair. 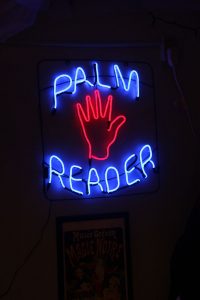 The museum doesn’t carry books on local history, and he referred me to the camp bookstore… a bit reluctantly, I thought. He said, “Well, all things considered, the camp bookstore is your best bet.” That was the first example of any east side- west side tension.

As I was getting ready to leave a couple came in. “Will you be open later, like around seven o’clock?” the man said.

“Just an FYI,” said Varney. “In this town, everything except the bar in the hotel is closed by seven. We roll up the sidewalks… where we actually have sidewalks.”

This entry was posted in View from the Road and tagged Cassadaga, Florida Trip, hauntings, spiritualism, The Fox Sisters. Bookmark the permalink.